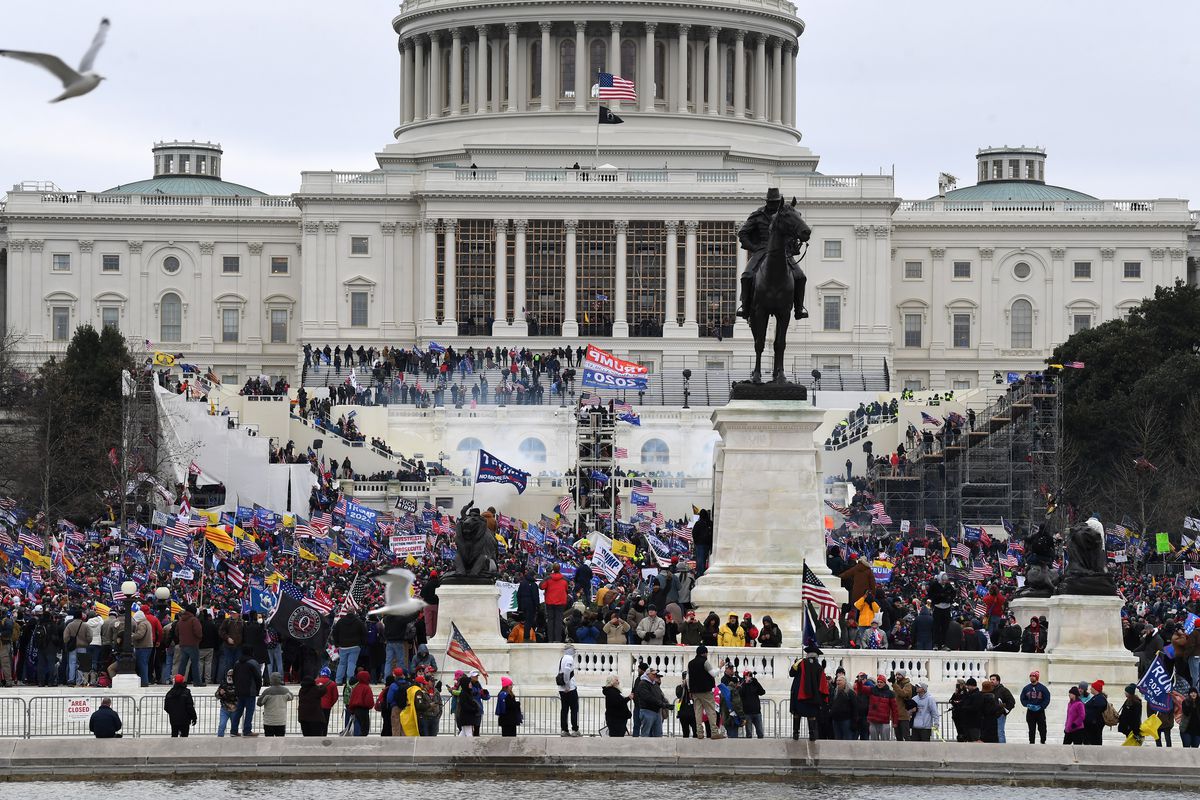 Supporters of President Donald Trump take over balconies and inauguration scaffolding at the Capitol on Wednesday, Jan. 6, 2021. Washington Post photo by Matt McClain

Supporters of President Donald Trump take over balconies and inauguration scaffolding at the Capitol on Wednesday, Jan. 6, 2021. Washington Post photo by Matt McClain

WASHINGTON - U.S. counterterrorism prosecutors are investigating two men who allegedly wore tactical gear and held plastic restraints or zip ties in the U.S. Senate during the breach of the U.S. Capitol last week, the Justice Department announced. The men were arrested Sunday.

Larry Rendell Brock, a retired Air Force lieutenant colonel, was arrested in Texas and charged with one count of knowingly entering a restricted building and one count of violent entry and disorderly conduct, prosecutors said.

Brock identified himself to The New Yorker last week as the man photographed in the well of the Senate chamber wearing a green combat helmet, tactical vest, and black and camouflage jacket. The photo shows the man holding a white flex cuff, used by police by restrain subjects, prosecutors said. The man in the photo was recorded apparently exiting the offices of House Speaker Nancy Pelosi, D-Calif.

Eric Gavelek Munchel, arrested in Tennessee, was charged with the same counts, prosecutors said, after being allegedly photographed climbing over a railing in the Senate gallery carrying plastic restraints, a holstered object on his right hip and a cellphone mounted on his chest.

Information about attorneys as not immediately available for the two men, who did not respond to requests for comment by The Washington Post but have given news interviews explaining their actions.

The cases are being prosecuted by the U.S. attorney’s office in Washington and the counterterrorism section of the Justice Department’s national security division, with assistance from federal authorities in northern Texas and central Tennessee.

Counterterrorism authorities are involved in a wide range of cases, and their participation speaks more to the focus of the Justice Department’s investigation of Wednesday’s events than the actions of any particular defendant, analysts noted.

FBI agents are exploring whether some of those who stormed the Capitol intended to do more than disrupt the certification of President-elect Joe Biden’s November victory, including whether anyone sought to kill or capture lawmakers or their staffers, The Washington Post has reported.

Their work includes trying to determine the motives of those who had weapons or other gear suggestive of a plot to do physical harm. Zip ties, for example, can be used as handcuffs.

Brock joins a growing list of military veterans who have been arrested and charged in connection with extremist events over the past few years, including the August 2017 white-supremacist rally in Charlottesville, Va.

Brock, 53, a father of three from Grapevine, Texas, retired from the Air Force as deputy director of its admissions liaison officer program, which oversees personnel who recruit prospective military officers, the Air Force said. It was not immediately clear whether Brock directly interacted with students or oversaw those who did.

He served as an A-10 pilot, the Air Force said. The New Yorker reported that he said he had served in Iraq and Afghanistan.

Brock spoke to the magazine after members of the public traced him down after identifying patches on his helmet and armor, which included the insignia of the 706th Fighter Squadron and a vinyl tag of the Texas flag overlaid on the skull logo of the Punisher, a Marvel comic-book character who has been adopted by police and military groups, and, more recently, by white supremacists and followers of the QAnon far-right conspiracy theory.

Brock denied to the New Yorker that he held racist views, he echoed Trump’s baseless claims of election fraud and he said he assumed he was welcome to enter the building.

One of the men photographed carrying zip-tie handcuffs on the Senate floor unmasked as a decorated Air Force veteran. My latest for @newyorker: https://t.co/6gt0wVAOTt

“The President asked for his supporters to be there to attend, and I felt like it was important, because of how much I love this country, to actually be there,” he said, according to The New Yorker.

An FBI arrest affidavit cited two tips about Brock it received based on his photograph, one from his former wife of 18 years, and one who said Brock’s associates at a defense contractor where he previously worked who knew he was traveling to the District of Columbia.

Interviews with family members and a close friend indicate that Brock’s political views had become increasingly radical in the past few years, to the point of alienating those closest to him.

But Brock told The New Yorker that he did not identify as part of any organized group. Brock added that he wore tactical gear because “I didn’t want to get stabbed or hurt,” citing “B.L.M. and antifa” as potential aggressors. He said he had found the zip-tie handcuffs on the floor.

“My thought process there was I would pick them up and give them to an officer when I see one . . . I didn’t do that because I had put them in my coat, and I honestly forgot about them,” he told the magazine.

Online sleuths who linked Munchel to the man in the Senate gallery carrying zip ties said the person photographed wore a patch on his tactical vest in the shape of Tennessee with a thin blue line, a pro-police symbol.

Munchel, 30, and his mother, Lisa Marie Eisenhart, 57, spoke with The Sunday Times as they were leaving D.C. and confirmed that they were inside the building during the riot.

“It was a kind of flexing of muscles,” Munchel told the publication. “The intentions of going in were not to fight the police. The point of getting inside the building is to show them that we can, and we will.”

Munchel did not mention to The Times whether he was carrying restraints.

Social media did an incredible job of piecing together the clues, beginning with the Getty images pic, leading eventually to Munchel’s FB page. pic.twitter.com/pYic0NwyDO

He, family members and neighbors did not respond to calls from The Post.

Military veterans have criticized Brock, saying an active-duty service member who participated in the riot could face court-martial.

Rep. Ruben Gallego, D-Ariz., an Iraq veteran who sits on the House Armed Services Committee, suggested on social media Saturday that military authorities should recall Brock and charge him under military jurisdiction because he is a retired officer who could still receive a pension.

The Washington Post’s Devlin Barrett and Alex Horton contributed to this report.