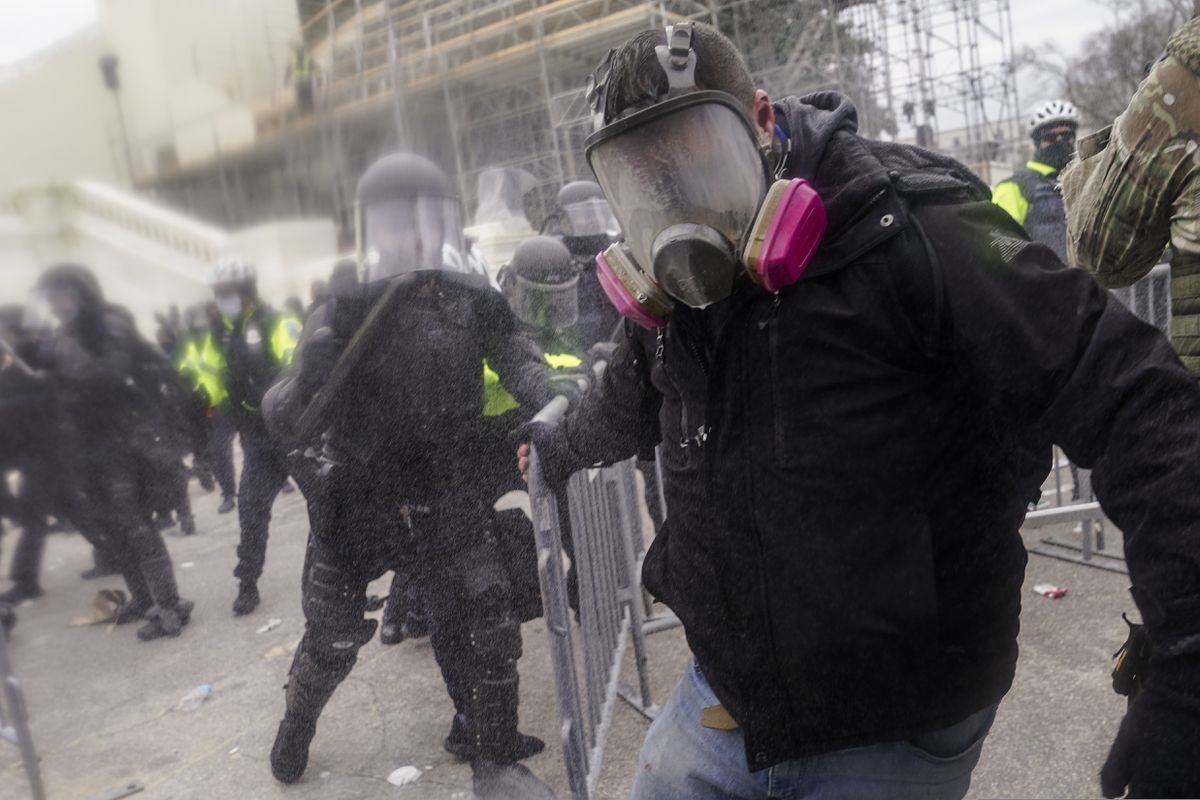 Trump supporters try to break through a police barrier, Wednesday, Jan. 6, 2021, at the Capitol in Washington. (AP Photo/John Minchillo)

Trump supporters try to break through a police barrier, Wednesday, Jan. 6, 2021, at the Capitol in Washington. (AP Photo/John Minchillo)

WASHINGTON - The Justice Department and the FBI have created a sedition and conspiracy task force to pursue charges against participants in the storming of the U.S. Capitol and are investigating potential links to domestic or foreign instigators, officials said Tuesday.

The investigation, one of the largest ever undertaken by the department, includes counterterrorism and counterintelligence facets and brought charges for more than 70 individuals and identified 170 suspects to date, said acting U.S. attorney Michael Sherwin of the District of Columbia. Those arrest figures are expected to increase into the hundreds, if not “exponentially.”

Sherwin and Steven D’Antuono, head of the FBI’s Washington Field Office, said any impression that prosecutors have mostly charged misdemeanor Capitol trespassing and D.C. curfew offenses is misleading. They said that the cases are the beginning and that U.S. authorities are investigating everything including the plundering of congressional offices and digital devices, assaults on law enforcement officers, theft of national security and defense information, in addition to felony murder and excessive use of force.

“The gamut of cases is mind-blowing,” Sherwin said.

Capitol and D.C. police were in openhanded combat with rioters, tear gas was used against police and destructive devices and semiautomatic weapons have been recovered, he said.

“People are going to be shocked with egregious activity in the Capitol,” Sherwin said, citing video footage and witness accounts that have not been made public. “No resources of the FBI or the U.S. attorney’s office will be untapped to determine if there was command and control, how it operated and how it executed these activities.”

[Video shows Capitol mob dragging a police officer down stairs. One rioter beat the officer with an American flag pole.]

The Wednesday storming of the Capitol by supporters of President Donald Trump disrupted the electoral vote count of President-elect Joe Biden and led to the deaths of five people - including a rioter who was fatally shot and a police officer who died after being injured at the scene.

A new grand jury was empaneled Friday and met Monday to hear new Capitol breach cases. Prosecutors also condemned violence against the news media, saying they would investigate and hold accountable those who assault, threaten or damaged the property of journalists.

Hours before officials spoke, the first public federal indictment in the Capitol breach was filed against an Alabama man who allegedly brought 11 molotov cocktails and five loaded weapons to the U.S. Capitol.

In an indictment dated Monday, Lonnie Coffman, 70, who was previously charged with two counts in a U.S. Capitol Police complaint, was charged with 16 counts of D.C. firearms violations and one federal firearms count. He also possessed a crossbow, several machetes, a stun gun and smoke devices, prosecutors said.

Coffman allegedly built the incendiary devices to be particularly lethal, prosecutors said, and “appears to have been motivated to conduct violence against our elected representatives.”

Coffman is accused of carrying 11 jars with gasoline and melted Styrofoam - which an FBI affidavit said could produce a “napalm-like” explosion of sticky, flammable liquid. The affidavit said he had a rifle, a shotgun, two 9mm pistols, a .22-caliber pistol, five types of ammunition and a large-capacity magazine, all loaded and not registered or licensed in D.C. Coffman apparently had a license to carry a pistol in Alabama, prosecutors said.

However, they asserted in court filings that the stockpile of weapons suggests “an intent [by Coffman] to provide them to others, as no one person could reasonably use so many at once.”

Prosecutors said the notes “raise alarm in the context of the Jan. 6 rioting and criminal infringement on our nation’s Democratic process.” They showed others that contained purported contact information for “Conservative Talk Show Host Mark Levin,” “Shaun [sic] Hannity,” and “Senator Ted Cruz.”

Coffman did not enter a plea, and he was ordered held without bond by a U.S. magistrate. Defense lawyer Tony Miles said Coffman has no criminal record, is retired after a history of work, has family ties in Alabama and served in the Army for 10 years.

Prosecutors previously said Coffman was investigated because he was the registered owner of a red GMC pickup truck with Alabama plates parked near the Capitol. Officers allegedly found the molotov cocktail devices while investigating reports of suspected pipe bombs near the Republican National Committee headquarters on Capitol Hill and its Democratic counterpart minutes before the assault on the Capitol began.

Coffman was not charged in relation to those possible devices.

On Tuesday, the FBI reiterated that it is offering a $50,000 reward for information regarding the pipe bombs, which Sherwin said were “real devices” with igniters and timers.

“We don’t know obviously exactly why they did not go off,” Sherwin said, or whether there were “a diversionary type of a tactic used by some of these rioters.”

[FBI report warned of ‘war’ at Capitol, contradicting claims that there was no indication of looming violence]

Other charges made public Tuesday included ones against Aaron Mostofsky, 34, the son of a Brooklyn judge, who was photographed inside the Capitol wearing what appear to be several fur pelts, a U.S. Capitol Police bulletproof vest and a riot shield.

Mostofsky made an initial appearance in New York City on four charges including entering restricted grounds, violent or disorderly conduct at the Capitol, and theft of government property exceeding $1,000, a felony that carries a statutory maximum penalty of 10 years in prison. Mostofsky was ordered released on a $100,000 bond Tuesday afternoon by U.S. Magistrate Sanket Bulsara in Brooklyn. He was given strict orders to remain in New York City and refrain from communicating with potential co-conspirators.

Aaron Mostofsky told the New York Post in a video at the Capitol last week: “We were cheated. I don’t think 75 million people voted for Trump - I think it was close to 85 million. I think certain states that have been red for a long time turned blue and were stolen, like New York.”

An FBI affidavit said Mostofsky also appeared to post on social media a self-taken video labeled, “DC bound stopthesteal,” and exchanged messages and photographs on Instagram describing his presence in the Capitol.

“If we find each other look for a guy looking like a caveman,” Mostofsky wrote a friend, the affidavit said, adding later, probably referring to the election, “Even a caveman knows it was stolen.”

The FBI added that after the election, Mostofsky posted on Facebook: “Since the republicans lost the house I have the following questions 1 when and where are we protesting/rioting . . .”

In the video interview, FBI agent Michael Attard wrote, Mostofsky said he took the shield he found on the floor, motioned to the vest, apparently indicated that he also found that item and took it. He said he returned a hat to a police officer “because that might be someone’s personal item,” the agent attested.

A new six-count indictment against previously charged Jacob Chansley, of Arizona, also added federal counts of civil disorder and disrupting an official proceeding. Chansley has been identified as the so-called “QAnon shaman,” who was photographed in horns, fur-lined headdress and face paint on the Senate dais. The offenses upon conviction carry up to a 20 year statutory maximum penalty.

The Washington Post’s Jennifer Jenkins contributed to this report.