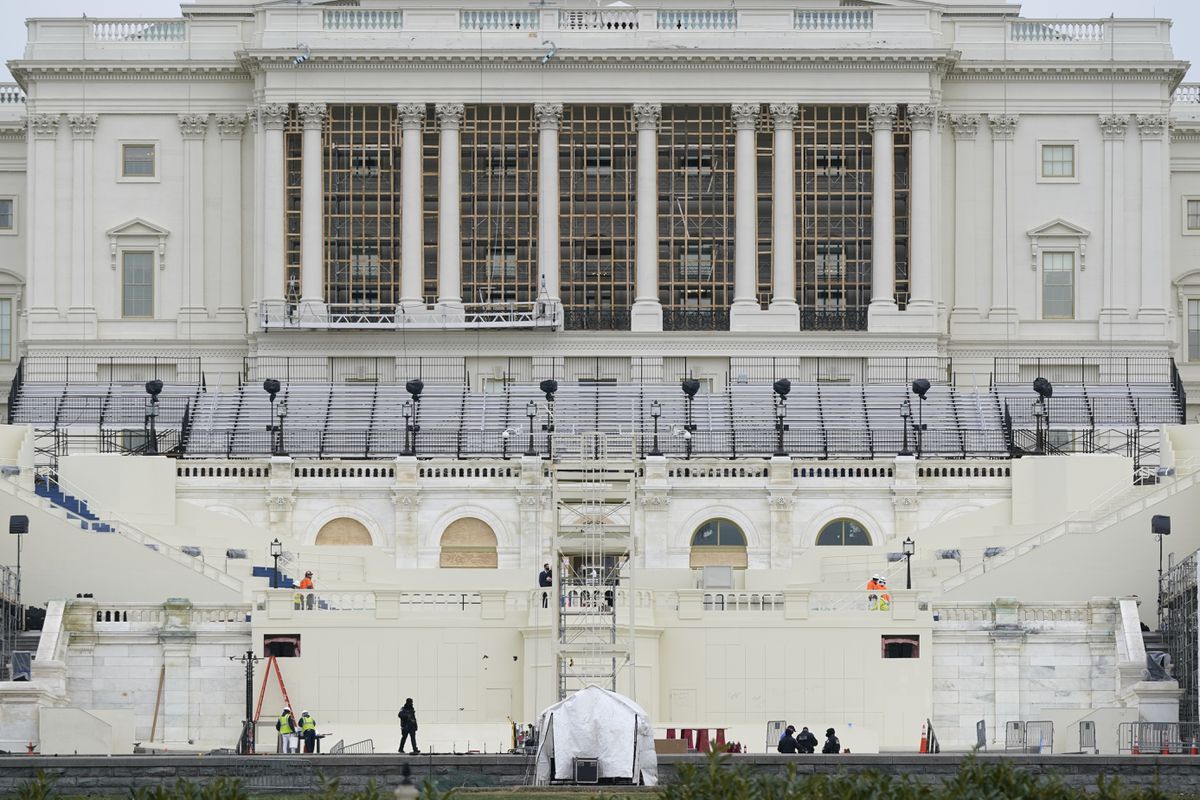 At noon on Jan. 20, Joseph Biden Jr. will be sworn in as the 46th president of the United States.

That may be the only thing anyone can say with certainty. Everything else is just an educated guess.

After a year like no other - a country wrestling with a deadly pandemic, a president who refused to concede the election, crippling unemployment and food lines - the 2021 inauguration was already going to be unlike any other. Then the U.S. Capitol was besieged, the first breach of the building since the War of 1812 and an unprecedented assault on the peaceful transition of power. The mob knocked down barricades and used the scaffolding erected for the inauguration ceremony to scale the walls and swarm through windows and doors.

In just hours, norms were shattered in a place devoted to history and decorum; and the inauguration had to be reimagined yet again. It was another blow for Biden’s Presidential Inaugural Committee and the Joint Congressional Committee on Inaugural Ceremonies which had hoped, as much as possible, to preserve the customs and institutions of this American celebration.

“We definitely want to honor the big, broad traditions of the inaugural,” Tony Allen, the chief executive of the Inaugural Committee, said recently. “But we also want to be sensitive to the realities of the moment, have safety protocols first and foremost.”

Those traditions included the swearing-in ceremony on the West Front of the Capitol, lawmakers and other dignitaries sitting on the risers, and public and virtual events taking place to celebrate the new president.

And now? Plans are made, then plans have to be changed; it is unclear what will remain and what will need to be revised. The final decisions may come on the last day, and in the last hours and final minutes. Tradition is one thing; security - including the coronavirus and possible violence - is another.

The following day, Sens. Roy Blunt, R-Mo., the chairman of the congressional inaugural committee, and Amy Klobuchar, D-Minn., released a statement saying, in part: “Yesterday was a sad and solemn day for our country. The outrageous attack on the Capitol, however, will not stop us from affirming to Americans - and the world - that our democracy endures. ... The great American tradition of an inaugural ceremony has occurred in times of peace, in times of turmoil, in times of prosperity, and in times of adversity. We will be swearing in President-elect Biden and Vice President-elect Harris on the West Front of the U.S. Capitol on January 20, 2021.”

What history will make of all of this is impossible to know. We live in the heat of a moment full of vivid sound bites, photos and videos. Historians make a more dispassionate assessment, remembering inaugurations in memorable moments: A line from the inaugural address. The hand on the Bible. A photo of the first dance of the president and first lady at an inaugural ball.

But most probably will note President Donald Trump’s decision not to attend this inauguration. Nor will he and the first lady welcome the Bidens that morning at the White House. He will not be the first president to snub the swearing-in of his successor: John Adams in 1801, John Quincy Adams in 1829 and Andrew Johnson in 1869 all skipped the ceremonies, a petty little footnote to their White House years.

Biden originally believed Trump’s attendance would be good for the country, but changed his mind after the Capitol was overrun. It’s “one of the few things he and I have ever agreed on. It’s a good thing, him not showing up.” In contrast, Vice President Mike Pence announced he will attend the swearing-in and Biden said, “We’d be honored to have him there.”

This, of course, is not the norm. Inaugurations are typically predictable, occasionally uplifting, sometimes boring - but Americans always could take for granted the peaceful transition from president to president.

“For the majority of inaugurations, there has been a camaraderie and the notion of putting the country above everything else, despite the transfer of power, whether it be between just different people in the same party or between political parties,” said Lina Mann, a presidential historian at the White House Historical Association. “Andrew Jackson started the trend of riding to the inauguration in a carriage with his successor, Martin Van Buren, and that has been pretty common throughout history after him.”

Nor is this the first inauguration to follow a contentious election. American history is full of bitter battles and recriminations, most forgotten by all but political scholars. Rutherford Hayes privately took the oath in 1877 at the White House because of threats made on his life; two days later, he was inaugurated in a public ceremony.

And Biden is certainly not the first president to be inaugurated during an economic crisis. Franklin Roosevelt spent his 1933 address, given at the height of the Great Depression, tackling the despair head-on. “Only a foolish optimist can deny the dark realities of the moment,” he told the millions listening to his speech.

“During times of distress, people pay more attention to the inaugural address,” Mann said. “It’s an opportunity for the president to lay out his vision for the term ahead, a way to connect with the American people and say, ‘This is where we’re going.’ And it’s also a call back to inclusion, of course, after presidential races that can get pretty nasty.”

But no other inauguration has taken place in the midst of a pandemic. By the time Warren Harding took the oath in 1921, the worst of the 1918 flu pandemic had passed and the country was moving forward: It was the first inauguration in which the outgoing president and president-elect used a car - a Packard Twin Six - to go to and from the Capitol.

Biden, by contrast, takes office at the height of the coronavirus disaster, with thousands of people dying every day. Before the Capitol was overrun, the pandemic was the primary concern in putting together the inaugural events.

“Once we came to the conclusion that safety was paramount, then you start thinking about what could be really possible and really interesting and different,” Allen said. “I believe that we will honor more everyday Americans through this process than we have ever in the history of the inaugural, which I feel is noteworthy, particularly in these difficult times.”

The swearing-in always has been the high point of any inauguration, but the traditional celebrations evolved into a week-long extravaganza: receptions, candlelight dinners, public concerts, the inaugural parade and the famous inaugural balls. Gowns worn by the first ladies are enshrined at the Smithsonian, a glamorous piece of history preserved for the ages. (A spokeswoman for the National Museum of American History said it is monitoring what Jill Biden will be wearing on Inauguration Day but has no specific plans yet.)

None of those things can happen this year. The only in-person events will be the swearing-in, a troop review and a military escort from the Capitol to the White House afterward.

One priority, he said: to hold the swearing-in on the west side of the Capitol, where it has been held for 40 years. It is, he said, a way to send the message that despite the virus, the traditions of the day are being respected.

The 2021 inauguration audience will be closer in size to that of a State of the Union address, about 2,000 people. Approximately 200 VIPs - including the families of the president-elect and the vice president-elect, congressional leadership, the chairman of the National Governors Association, a senior diplomat or two - will sit socially distanced on the stage; the rest (members of Congress, other dignitaries) will be seated on the grounds below.

And there will be masks and coronavirus testing. “Everybody on the platform, everybody that goes through the Capitol building that day, will have to be tested within a couple of days of the event itself,” Blunt said. “We’re going to try to use this the best we can to also send a message that this is still a serious problem and people need to treat their events differently than those in the past.”

It is unclear which past presidents will attend, but Blunt believes it is important that they do, if possible: “The world sees that the United States of America unites after an election and we have one president at a time.”

But the congressional lunch that traditionally follows the inauguration has been scrapped. Originally, there was some hope that lawmakers and their guests could be seated at tables for two, set six feet apart. As infections accelerated, those plans were dropped. There will, however, still be a brief exchange of gifts between the president and congressional leaders.

Members of Congress get two tickets to the swearing-in for themselves and one guest. No tickets are available this year for the public to watch the ceremony from the National Mall, and officials are asking people to stay home and watch the ceremonies on television.

For those attending, the two inaugural committees have redoubled their efforts to keep everyone safe.

“We are confident in our security partners who have spent months planning and preparing for the inauguration, and we are continuing to work with them to ensure the utmost safety and security of the president-elect, vice president-elect, participants and the public during this historic event,” said a senior member of Biden’s inaugural committee who spoke on the condition of anonymity because he is not authorized to speak publicly about security plans.

But Gen. Barry McCaffrey, a retired four-star Army general, said he believes the event should be held inside. “Given the security threat to the inauguration ... the ceremony should be moved to a more protected location like the Capitol Dome,” he tweeted Monday. “NOT a signal of weakness. I’ve seen a lot of combat. I’m still alive because I react immediately to signs of danger.”

For everything else, Allen said, Biden’s team is trying to reflect the message of the campaign. Jan. 18 is designated as a day of service, with calls for Biden supporters to participate virtually and regionally in their homes or communities: making masks and doing food drop-offs or undertaking other charitable efforts. The following day is dedicated to the victims of the pandemic and the workers who are fighting it. And the traditional inaugural parade? A virtual event, similar to the roll call of states at the Democratic National Convention last August.

On the night of the inauguration, Allen said, there are plans for something “very celebratory and thoughtful” for Americans to enjoy, although the details are a closely held secret. “We still think we could create the right kind of iconic moments that honor the grand tradition.”