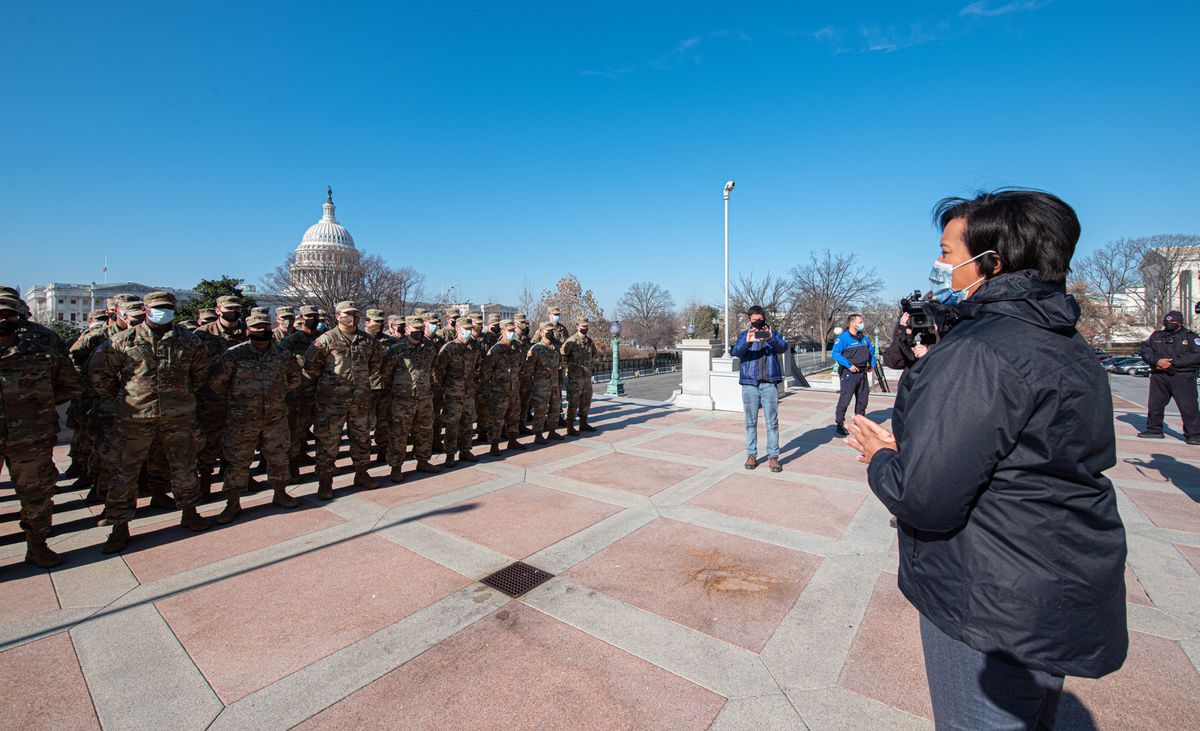 WASHINGTON — Twelve U.S. National Guard members have been removed from securing President-elect Joe Biden’s inauguration after vetting by the FBI, including two who made extremist statements in posts or texts about the Wednesday event, Pentagon officials said. There were no specific threats to Biden.

Two U.S. officials told The AP that all 12 were found to have ties with right-wing militia groups or posted extremist views online. The officials, a senior intelligence official and an Army official briefed on the matter, did not say which fringe groups the Guard members belonged to or what unit they served in. The officials were not authorized to speak publicly and spoke to The Associated Press on condition of anonymity. The officials told the AP they had all been removed because of “security liabilities.”

Gen. Daniel Hokanson, chief of the National Guard confirmed that Guard members had been removed and sent home but he said only two were for inappropriate comments or texts related to the inauguration. The other 10 were for other potential issues that may involve previous criminal activity or activities, but not directly related to the inaugural event.

Their removal from the massive security presence at the nation’s capital comes as U.S. defense officials have been worried about a potential insider attack or other threat from service members following the deadly riot at the U.S. Capitol Jan. 6 by Trump supporters. The FBI has been working to vet all 25,000 National Guard in town. Officials have said that the Pentagon has found no intelligence so far that would indicate an insider threat.

Neither Hokanson, nor Pentagon spokesman Jonathan Hoffman would provide details on the comments or texts made by the two Guard members. Hokanson said one was identified by his chain of command and the other was identified through an anonymous tip.

Hoffman added that officials aren’t asking questions right now of those who were flagged. “We’re, out of an abundance of caution, taking action and immediately removing them from the line of duty at the Capitol and the events taking place.”

“And then we will address them, whether it’s through law enforcement if necessary or through their own chain of command.”

Washington has been on edge since the deadly insurrection at the Capitol, which has prompted extraordinary security measures ahead of Biden’s inauguration. A fire in a homeless camp roughly a mile from the Capitol complex prompted a lockdown Monday during a rehearsal for the inauguration.

U.S. Secret Service tightened security in and around the Capitol days earlier than usual in preparation, and the city center is essentially on lockdown with streets blocked, high fencing installed and tens of thousands of troops and law enforcement officers stationed around the area.

The Secret Service issued a bulletin over the weekend about what it sees as an “uptick” in National Guard troops posting pictures and details of their operations online.

The Associated Press obtained the “all concerned” message sent to all National Guard troops coming to Washington. Without getting into specific postings, the bulletin read: “No service members should be posting locations, pictures or descriptions online regarding current operations or the sensitive sites they are protecting” and urged them to stop immediately.

Asked about the bulletin, a spokesperson for the Secret Service issued a statement saying it “does not comment on matters of protective intelligence.”

Contacted by the AP Tuesday morning, the National Guard Bureau referred questions to the U.S. Secret Service and said: “Due to operational security, we do not discuss the process nor the outcome of the vetting process for military members supporting the inauguration.”

Over the summer, a man was arrested in Los Angeles for impersonating a National Guard member during protests in the city near Los Angeles City Hall. The man, Gregory Wong, was carrying a sidearm and assault rifle but was taken into custody after actual Guardsmen confronted him when they noticed things out of place on his uniform.