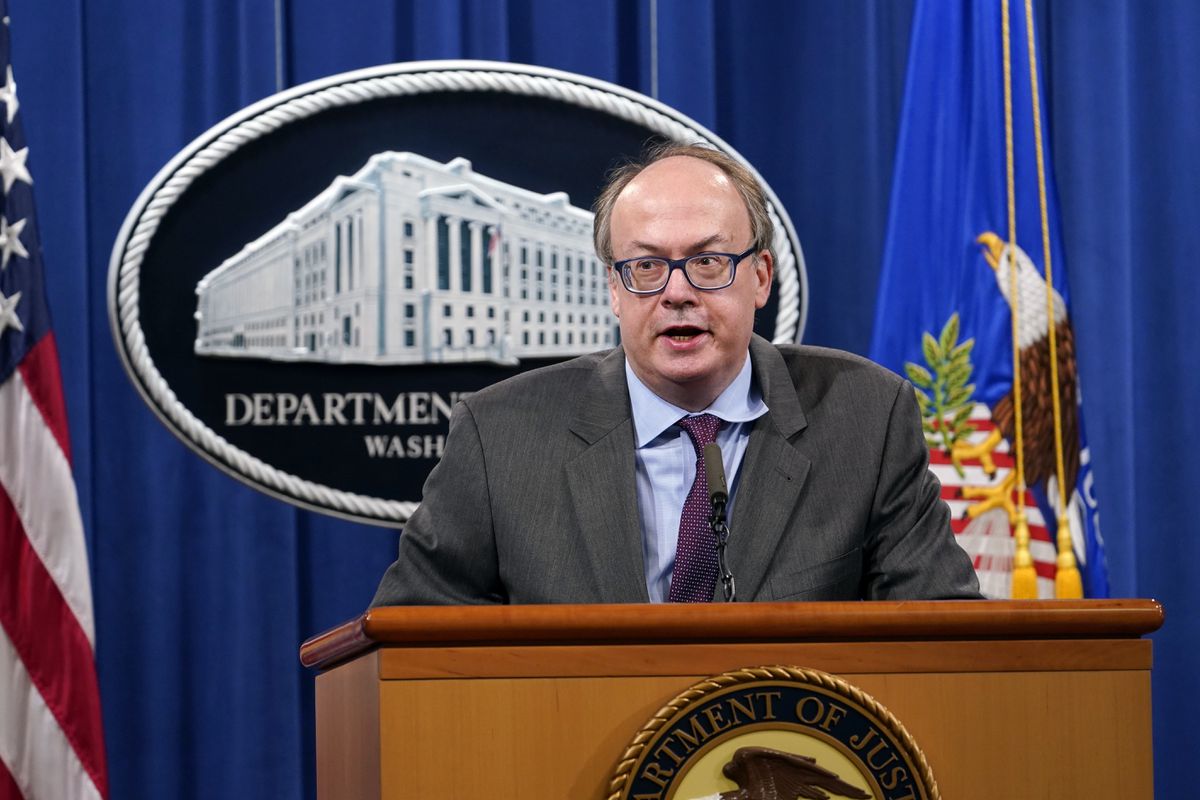 Jeff Clark, then Assistant Attorney General for the Environment and Natural Resources Division, speaks during a news conference at the Justice Department in Washington, Monday, Sept. 14, 2020. (AP Photo/Susan Walsh, Pool)

Jeff Clark, then Assistant Attorney General for the Environment and Natural Resources Division, speaks during a news conference at the Justice Department in Washington, Monday, Sept. 14, 2020. (AP Photo/Susan Walsh, Pool)

WASHINGTON -- The Justice Department’s inspector general announced Monday that its office is opening an investigation into whether any current or former department official tried to improperly “alter the outcome of the 2020 Presidential Election” - a broad review that comes on the heels of a revelation that then-President Donald Trump considered replacing his acting attorney general with an official more amenable to his unfounded claims of voter fraud.

Justice Department Inspector General Michael Horowitz announced the review in a two paragraph news release, though he noted his jurisdiction would be limited to “allegations concerning the conduct of former and current DOJ employees,” and he could not examine other government officials. The news release said the inspector general would follow its normal process in releasing the results of its work publicly.

Horowitz’s announcement comes just days after reporting that Trump entertained a plan to replace the acting attorney general for his final weeks in office, Jeffrey Rosen, with a different department lawyer, Jeffrey Bossert Clark, who was more amenable to wielding the department’s power to help keep Trump in office. According to people familiar with the matter, Trump only aborted the plan after Justice Department officials threatened a mass resignation.

The plan sparked outrage among lawmakers and former Justice Department officials, who saw in it another attempt by Trump to inappropriately wield the powers of federal law enforcement to benefit his own political interests. Senate Majority Leader Chuck Schumer, D-N.Y., had publicly called for the inspector general to investigate, and Democrats on the Senate Judiciary Committee asked the department to preserve records because they, too, would be looking into the matter.

Horowitz said he announced the investigation “to reassure the public that an appropriate agency is investigating the allegations,” but he declined to comment further. While Horowitz will likely have broad access to Justice Department files and emails, he cannot compel the cooperation of former officials - which could limit his probe. The investigation will likely reveal conversations officials had with Trump, but Horowitz’s office does not have the jurisdiction to specifically explore the president or other White House officials.

Trump and his political allies had long sought to press the Justice Department to help boost his unfounded claims of election fraud. The department inquired into allegations across the country but ultimately found the evidence lacking, and then-Attorney General William Barr said as much publicly in early December.

Barr’s relationship with Trump already had grown fraught because Barr would not take other steps that Trump saw as helpful to him politically in the months leading up to the election, and his publicly breaking with the president on fraud was something of a last straw. Barr contemplated whether he might have to resign or be fired, according to people familiar with the matter. While tensions later eased somewhat, Barr later submitted his resignation, indicating he planned to step down Dec. 23.

That left in charge Rosen, who had been Barr’s top deputy and who shared his views on the lack of evidence to support Trump’s claims of fraud, according to people familiar with the matter. But, the people said, Trump soon came to meet a different Justice Department official who seemed to share his worldview: Clark, whom Trump had appointed to lead the Justice Department’s Environment and Natural Resources Division and who later would come to lead the Civil Division.

Clark, according to people familiar with the matter, pushed to have the department hold a news conference to announce investigators were examining serious fraud allegations, and to take particular steps in Georgia, such as sending a letter asserting Joe Biden’s win could be voided there. Trump, the people said, then contemplated putting Clark in charge of the department, and Rosen was soon informed of the plan. The acting attorney general pushed for a meeting with Trump himself.

At the meeting were Trump, Clark and Rosen, along with Richard Donoghue, the acting deputy attorney general; Steven A. Engel, the head of the department’s Office of Legal Counsel; and Pat Cipollone, the White House counsel, the people familiar with the matter said. The people said Rosen, Donoghue, Engel and Cipollone pushed against the idea of replacing Rosen, and warned of a mass resignation. Ultimately, Trump did not move forward, and Rosen remained in place.

Clark, in a written statement, has denied that he “devised a plan . . . to oust Jeff Rosen,” and he has also denied that he made recommendations “based on factual inaccuracies gleaned from the Internet.” He seemed to quote language from the New York Times, which first reported the event.

“My practice is to rely on sworn testimony to assess disputed factual claims,” Clark said. “There were no ‘maneuver[s].’ There was a candid discussion of options and pros and cons with the President. It is unfortunate that those who were part of a privileged legal conversation would comment in public about such internal deliberations, while also distorting any discussions . . . Observing legal privileges, which I will adhere to even if others will not, prevent me from divulging specifics regarding the conversation.”

Horowitz already had been examining another incident of possible Justice Department malfeasance over the election: the abrupt departure of the U.S. attorney in Atlanta after Trump complained officials in Georgia were not doing enough to find election fraud.

Byung J. “BJay” Pak unexpectedly announced Jan. 4 that he was stepping down that day as the U.S. attorney for the Northern District of Georgia, and Trump then bypassed his top deputy in selecting a temporary replacement. According to people familiar with the matter, Pak had received a call from a senior Justice Department official in Washington that led him to believe he should resign shortly before he did so.

Pak’s resignation came just a day after The Washington Post reported on a call in which Trump urged Republican Brad Raffensperger, the Georgia secretary of state, to “find” enough votes to overturn his election defeat in that state.