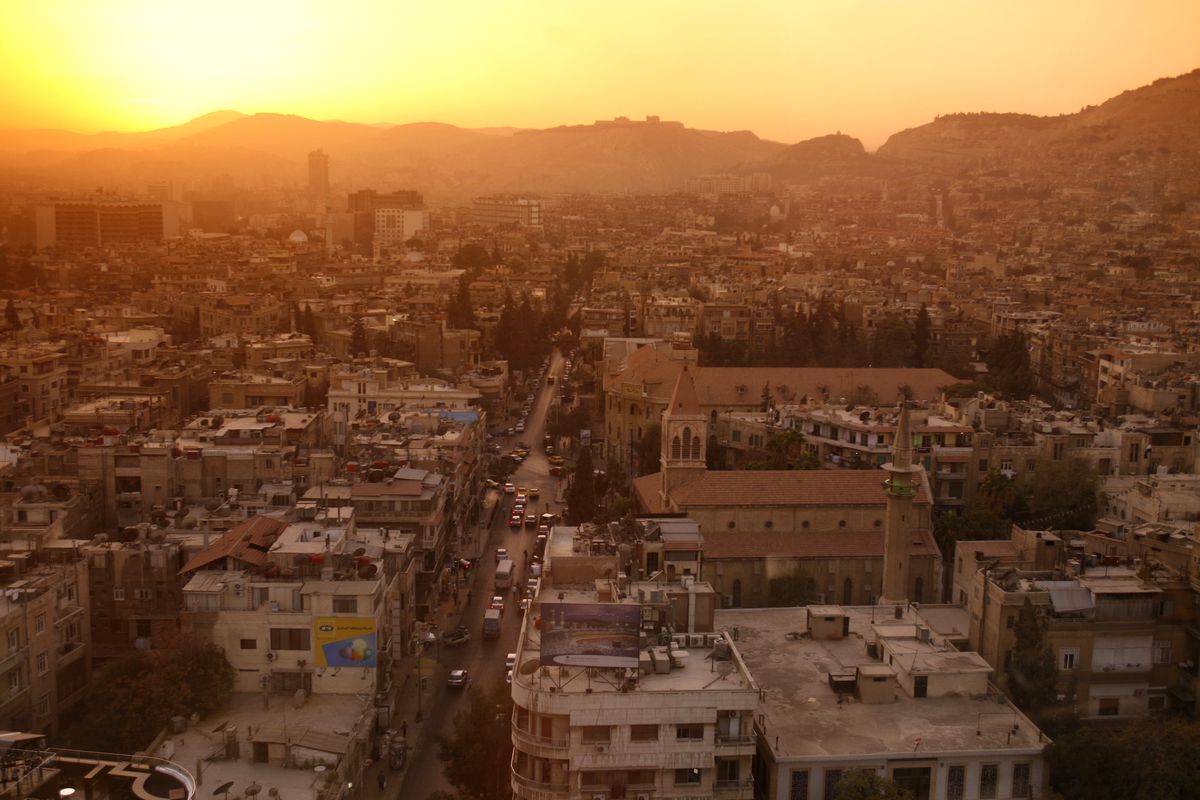 DUBAI - Josephine Tawaging was being bundled off to the airport in a locked car, begging to be let out.

She had traveled from her home in the Philippines a month earlier to find work in Dubai, the Middle East’s glitzy business hub, she later recalled. But her recruitment agency instead locked her in a dark and dirty dormitory with several other women, who soon learned they would all be sent to war-crippled Syria to be sold.

As Tawaging, 33, was being driven to Dubai’s airport bound for Damascus, she protested one last time - and was slapped across the face. “They got angry with me and said, ‘if you don’t go, we’ll kill you,’ " she said in an interview, recounting the ordeal in 2019. Today, she remains trapped in Syria.

Dozens of Filipina women who were recruited to work in the United Arab Emirates have been trafficked to Syria to work as maids, at times subjected to physical and sexual attacks by their employers and denied the salaries they were promised, according to interviews conducted with 17 of these women over Facebook Messenger.

The Filipinas are often imprisoned in their employers’ homes, and those who’ve escaped have fled to the Philippine Embassy in Damascus, where some of them say that about 35 women are now seeking shelter, unable to return home.

“My employer slapped me and put my head into the wall. I escaped because he did not give me a salary for nine months,” said Flordeliza Arejola, 32, who has been in Syria since 2018. “I waited until he was asleep and climbed over the wall. I had some money for a taxi (to the embassy).”

Tens of millions of international migrants live in Persian Gulf countries like the UAE, many employed in sectors such as construction and hospitality or as domestic workers. Their cheap labor sustains the economies of the Arab region, while their remittances are often vital to supporting families back home.

Syria, after nearly a decade of civil war, is a far less desirable destination for migrant workers, but affluent Syrian families are prepared to pay thousands of dollars to obtain a maid. This has fueled demand for female migrants trafficked against their will.

When asked about the trafficking of Filipinas to Syria, Paul Raymund Cortes, the Philippines’ consul general in Dubai said, “Of course we are very concerned about their plight.” He said migrant workers should coordinate their overseas employment with Philippine government agencies and seek their help if they “are being lured to work outside the UAE.”

The Filipina women said in interviews that they arrived in the Middle East on 30-day tourist visas for the UAE, expecting it to be their final destination. But the recruitment agencies kept them locked up until the visas expired, making employment in the UAE no longer possible.

“The accommodation was dirty. There were more than 20 women in my room, and we slept on the floor,” Arejola said. “Our phones were confiscated.”

While they were being held, the women were told repeatedly by agency staff that Syria is a great place to live, that the civil war is over, and that they would command high salaries and have one vacation day per week. At the same time, the women said they were often physically abused and threatened, especially if they objected to going to Syria.

Six of the interviewed women identified two UAE employment agencies as having played a role in the trafficking. The Washington Post has not independently corroborated the claims, and the agencies did not respond to multiple requests for comment.

Research for this story began after a reporter saw a Facebook video in which more than 15 Filipinas inside the Damascus embassy appealed for help, and individual women were then identified via Facebook and contacted for interviews.

After being held in the UAE, the women were put on flights to Damascus in groups of two or three. When they arrived, the women said they were held in communal accommodations owned by local brokers until they were placed in a household and were forced to line up for prospective customers.

“I felt like a prostitute because we all stand in a line, and the employers choose who they want,” said one woman, a 48-year old grandmother who spoke on the condition of anonymity because she felt ashamed.

The selling price was typically between $8,000 and $10,000, according to several of the women, who said their employers told them how much they were purchased for. The women who were not quickly sold were subjected to increasing violence by the Syrian brokers.

“I was told to be good, so I won’t get raped and hurt. I stayed quiet and just said yes,” said Joymalyn Dy, 26. The agency boss “wanted to sleep beside me and touch me. Luckily, the next day, my employer took me.”

Once behind the closed doors of their new homes, the women said they were subjected to physical and sexual attacks by their employers. Geraldine Pahigon, 30, said she was repeatedly assaulted by her employer. “I was slapped, kicked and bitten many times,” she said. “I endured this for four months.”

She also said she was never paid her for her work, echoing a complaint by other women who said the salaries they were promised by the UAE employment agencies - about $500 a month - did not materialize.

Another woman who was brought to Syria a year ago described 18-hour workdays starting at 5 a.m. with no days off. She said her employer is a member of a prominent Syrian family and lives in a home with guards at the front gate.

“I’m afraid to escape,” said the 32-year-old woman, whose name is being withheld for her safety. “I want to go home, but I don’t how I will get there.”

Four of the women identified the broker agency in Damascus that sold them as Nobalaa Alsham.

Contacted by WhatsApp, a lawyer for that company, Ramdan Mohammad, said the women’s accounts were “absolutely incorrect.” He said the women “consent to come to work in Syria and that is (confirmed) by video with their voice and pictures by the sending office before they travel, and we do our part to secure sponsors, homes and people who treat them very well and humanely.” He said, “We check in on them and that they receive their full wages periodically and ask about their communication with their families via the Internet.”

Mohammad added that the agency helps any workers who raise concerns, and there have been no complaints similar to those made by the women interviewed by The Post.

Lailanis Abduljaber said she was 12 years old when she was trafficked three years ago.

“While I walked home from school, I was thinking about ways to escape the struggle of poverty, and of girls that went abroad and have a good life, and their relatives could build their own house,” she says. “I felt sorry for my family, so I wanted to help them.”

Lailanis, from Cotabato City in the southern Philippines, found a recruitment agency that said it would arrange a passport for her with a falsified age and place her in a job in Dubai. Instead, she was taken to Syria.

She said she initially worked hard for her employer in Damascus, who knew she was 12. But when Lailanis received news after several months that her brother back home had died, she was overwhelmed by grief and her work suffered.

As punishment, she said, her employer slapped her and denied her food. When she begged to be allowed to go home to her family, he dropped her off at the Philippine Embassy, expecting it would fly her back. It did not. Now 15 years old, she said she has been living at the embassy for the past 20 months.

Lailanis does not know when she will get to go home, and embassy staff have asked her if she’d like to go back to work instead.

As soon as an opportunity arose, many of the women chose to escape their employers’ homes and flee to the Philippine Embassy. But they were not greeted with the sanctuary they had hoped for.

Some of the embassy staff are strict, the women said. A common punishment for minor offenses - such as sneaking some extra food from the kitchen - is the denial of breakfast for two weeks. The dormitory-style rooms are cold in the winter, and the women are locked inside each night.

To prevent them from complaining to their families about the living conditions at the embassy, their phones were confiscated. “For almost five months we couldn’t communicate with our families because our phones were taken by the ambassador,” said the 48-year-old Filipina. “It’s like being in prison.”

In response to a request for comment, the Philippine Department of Foreign Affairs said it had launched an “investigation into allegations of poor treatment while under temporary shelter and recommend the necessary actions accordingly.” The department said it “has actively taken measures to ensure the safety and well-being of Filipino victims of trafficking” in Syria and has been trying to secure exit visas for the women and pay any outstanding fees and fines imposed by the Syrian government. Since December, when the department was contacted for comment, Philippine officials said they have begun repatriating some of the women.

Of the 35 female trafficking victims who were staying at the embassy in December, some said they had been stuck there for as long as two years because they were unable to obtain Syrian exit visas and money for flights home.

Several women reported being pressured by embassy staff to return to the Syrian households they’ve escaped from.

“I want to die,” said Juvie Balondo, 27, who has been staying at the embassy for a year. “We are all so stressed.”

Tawaging, who recalled being bundled off to Damascus two years ago, has been marooned in the embassy after fleeing her employer early last year. “I ran away because my employer tried to rape me, and it made me too nervous (to stay),” she said.

Now, she spends most of her days in bed with little to occupy her. For more than a year, she said, she has been unable to speak with her children in the Philippines, ages 9 and 10, because the family has no internet service. A widowed mother, Tawaging had come to the UAE for work to provide a future for her children.

“I really miss them,” she said. “We are still hoping and waiting to hear when we can go home.”