Earth is now losing 1.2 trillion tons of ice each year. And it’s going to get worse. 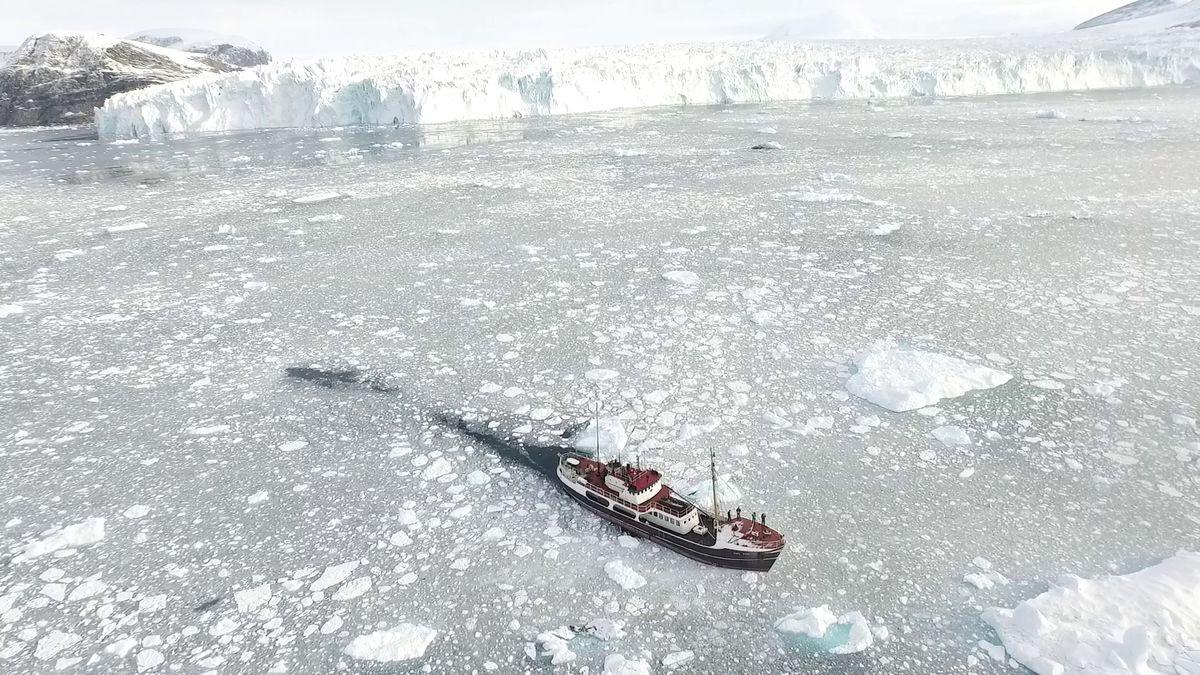 The Oceans Melting Greenland mission carried out depth and salinity measurements of Greenland's fjords by boat and aircraft. MUST CREDIT: NASA.

The Oceans Melting Greenland mission carried out depth and salinity measurements of Greenland's fjords by boat and aircraft. MUST CREDIT: NASA.

Global ice loss has increased rapidly over the past two decades, and scientists are still underestimating just how much sea levels could rise, according to alarming new research published this month.

From the thin ice shield covering most of the Arctic Ocean to the mile-thick mantle of the polar ice sheets, ice losses have soared from about 760 billion tons per year in the 1990s to more than 1.2 trillion tons per year in the 2010s, a new study released Monday shows. That is an increase of more than 60%, equating to 28 trillion tons of melted ice in total - and it means that roughly 3% of all the extra energy trapped within Earth’s system by climate change has gone toward turning ice into water.

“That’s like more than 10,000 ‘Back to the Future’ lightning strikes per second of energy melting ice around-the-clock since 1994,” said William Colgan, an ice-sheet expert at the Geological Survey of Denmark and Greenland. “That is just a bonkers amount of energy.”

There is good reason to think the rate of ice melt will continue to accelerate. A second, NASA-backed study on the Greenland ice sheet, for instance, finds that no less than 74 major glaciers that terminate in deep, warming ocean waters are being severely undercut and weakened.

And it asserts that the extent of this effect, along with its implications for rising seas, is still being discounted by the global scientific community.

Failing to fully account for the role of ocean undercutting means sea-level rise from the ice sheets may be underestimated by “at least a factor of 2,” the new paper in the journal Science Advances finds.

“I think this is an example that the current projections are conservative,” Rignot said. “As we peer below we realize these feedbacks are kicking in faster than we thought.”

Together, the two studies present a worrying picture.

The first finds that the current ice losses, which are accelerating quickly, are on pace with the worst scenarios for sea-level rise put out by the United Nation’s Intergovernmental Panel on Climate Change (IPCC). That expert body found that ice sheets could drive as much as 16 inches of sea-level rise by 2100.

But on top of that, the new NASA work on Greenland suggests that the IPCC, whose sea-level projections have long been faulted as being conservative, could underestimate future sea-level rise if the panel, which has a new report expected later this year, does not take full account of the power of the ocean to knock the ice backward and undermine it.

The first study, in the journal The Cryosphere and led by University of Leeds researcher Thomas Slater, is basically an enormous work of accounting. It tallies losses from the vast Greenland ice sheet, to the jagged peaks of the Himalayas and then southward to Antarctica during the 23-year period from 1994 through 2017.

Not all the ice the planet has lost translates directly into rising seas. For instance, 7.6 trillion tons, the largest single total, comes from the melting of the floating ice cover of the Arctic Ocean, which does not raise seas at all. Nor do the 6.5 trillion tons subtracted from Antarctic ice shelves, as those, too, were already afloat.

Still, the loss of floating ice paves the way for the unlocking of ice on land in Greenland and Antarctica, where 99% of all the planet’s fresh water sits in frozen form, crushing down the invisible landforms beneath it. Greenland and Antarctica together have lost 6.3 trillion tons since 1994, the research finds, leaving out the past three years, which would surely add at least another trillion on top of that.

So far, the world’s mountain glaciers have actually been keeping pace with the ice sheets, losing 6.1 trillion tons of ice over the same time period and thus adding roughly the same amount to sea level. Over time - probably starting right around now - the polar ice sheets will begin to massively outdistance the losses from mountain glaciers and become the dominant drivers of global sea-level rise.

“It is no surprise that the ice on our planet is melting,” said Robin Bell, an expert on the polar ice sheets at Columbia University’s Lamont-Doherty Earth Observatory. “We have turned up the temperature, and just like you can watch an ice cube in your glass melt on a hot summer day, our actions are melting our planet’s ice.”

The question now becomes: Just how fast will climate change lead to the melting of the biggest and thickest ice, the ice atop Greenland and Antarctica?

That’s where the results of a six-year NASA campaign to study the influence of warming ocean waters on the melting of Greenland’s glaciers have some unsettling news.

Together with the University of Leeds study, the NASA research helps show why global ice loss is likely to further speed up as global warming continues. One of the main mechanisms causing Greenland’s glaciers to flow faster into the sea, unlocking inland ice and allowing it to slide toward the coast as well, is the encroachment of warm water underneath the ice in the many deep fjords of coastal Greenland.

Scientists have observed accelerating ice loss in nearly every sector of the Greenland ice sheet. While researchers have suspected that warming ocean waters, rather than increasing air temperatures alone, may be behind the melting of glaciers in typically frigid northwest Greenland, for example, the evidence had previously been lacking.

The new study, led by glaciologist Mike Wood, also of UC-Irvine and NASA’s Jet Propulsion Laboratory, relies on measurements taken via hundreds of instruments deployed by aircraft and ships for the past six years, revealing the shape of the land that lurks under the ice where 226 glaciers terminate in the sea, as well as the temperature structure of waters coming into contact with the ice.

Glaciers that flow into Greenland’s deepest fjords are losing the most ice, Wood said. The 74 glaciers situated in deep, steep-walled valleys accounted for nearly half of Greenland’s total ice loss between 1992 and 2017, the study found. Greenland is now the largest contributor to global sea-level rise.

“In these deep fjords, warm water lurks hundreds of feet below the ocean surface, melting the glaciers from below,” Wood said. “When those warm waters become even warmer - a phenomenon we saw through the early 2000s - the melt increases, causing the glaciers to recede, become unstable and lose ice.”

The science produced by the six-year field campaign, known as Oceans Melting Greenland, may force modelers to rethink their estimates for future ice loss. not just in Greenland but also for glaciers where similar dynamics are at work in Antarctica, such as in the West Antarctic ice sheet.

The NASA-led research shows that the undercutting of glaciers by relatively mild ocean waters explains why so many of Greenland’s glaciers have sped their movement into the ocean, adding to sea-level rise, while some others have not accelerated as much.

In many coastal locations, relatively mild, salty waters sit below a layer of colder, fresher water in glacial fjords. These mild waters are coming into contact with the base of glaciers, where ice meets bedrock, which destabilizes the ice.

“A large amount of a glacier’s stability depends on ice at its base,” Wood said. “Remove it and you destabilize the whole thing, like Achilles’ heel.”

At the same time, during the summer months, meltwater from inland areas can flow all the way to the base of glaciers that end in the sea and pour into the fjords. This fresh water can drag some of the heavier, warm water toward the surface, accelerating melting further.

The NASA data shows that the shape of the land undergirding glaciers and the water temperatures in coastal areas help determine the rate of Greenland’s ice loss, but this information isn’t being translated yet into projections for sea-level rise.

“Very few ice-sheet models include that ice process at the frontal margin with realistic forcing,” Rignot said. If models were to include undercutting, their estimates of sea-level rise from the faster loss of coastal glaciers could be up to twice what they are now, the study shows.

“I think that’s a big deal,” Rignot said. “You have to account for ocean temperatures in fjords and undercutting. If it’s not in your model, you won’t get the prediction right.”

The Greenland results add urgency for research into the mechanisms that are destabilizing ice in Antarctica, where melting from warming oceans coming into contact with the base of glaciers is the main contributing factor, rather than increasing air temperatures.

“Because scientific progress is so often built small step on top of small step, I am not surprised by their findings,” Twila Moon, a research scientist at the National Snow and Ice Data Center in Boulder, Colo., said of the Greenland results. Moon was not involved in either study. “But their results are still devastating, further confirming that we are losing ice both from a warming atmosphere and from a warming ocean.”

“Ice loss is not a process that will stop itself,” Moon said. “We humans are the ones with our hand on the climate control knob, and our decisions are the most important in determining the future of Greenland ice.”