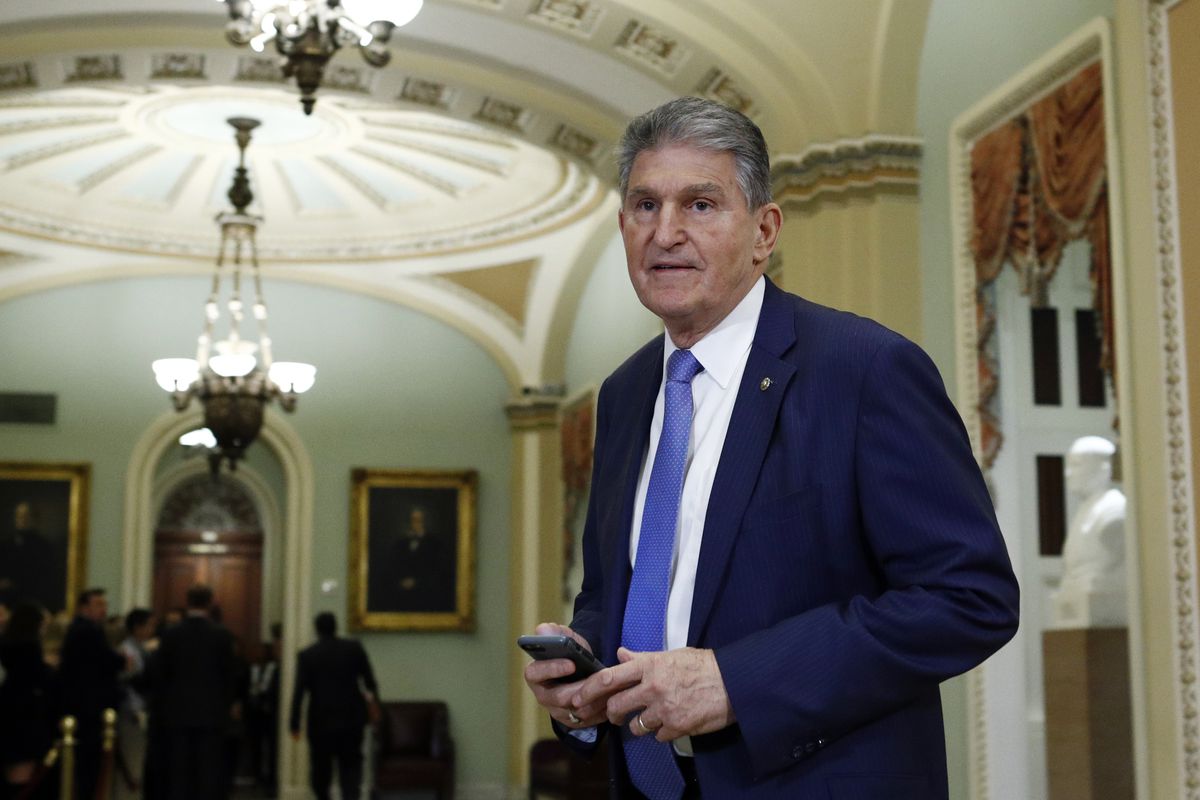 He’s a coal country native, born to a family of mining town mayors. As West Virginia governor, he sued the Environmental Protection Agency. He has scuttled efforts to regulate greenhouse gas emissions, criticized the Paris climate agreement and famously shot a copy of a cap-and-trade carbon proposal full of lead.

Now the fate of the most ambitious climate agenda ever proposed by an American president rests in his hands.

Sen. Joe Manchin, who is set to become chairman of the Senate Energy and Natural Resources Committee, is a conservative Democrat from one of the reddest states in the country. In a Senate split 50-50, Manchin is also a crucial swing vote on contentious legislation, defining the limits of what President Joe Biden and the Democrats can accomplish. Over the weekend, he led a bipartisan, bicameral group of lawmakers in talks with the White House over its proposed $1.9 trillion coronavirus relief package.

But perhaps few of Biden’s priorities will be as polarizing as the environment. The president ran on a $2 trillion plan to transition the U.S. economy toward renewable-energy sources and cut the planet-warming pollution that comes from oil, gas and coal. Biden has framed his proposal as a jobs plan, but the fossil fuel industry - including coal companies - warns of economic fallout: lost jobs and tax revenue and higher consumer costs.

Manchin has already said he doesn’t support eliminating the filibuster as a way to enable Democrats to pass bills without Republican votes. If Democrats are to fight climate change, he wants them to do it the old fashioned way - his way. That means deals forged through compromise, the gears of government greased by long-standing relationships and the occasional Mason jar of moonshine served during negotiations.

“I want to work with them and hear all different sides of it, from the environmental to the industrial base,” Manchin said in a recent interview.

But the physics of greenhouse gases accumulating in the atmosphere are nonnegotiable. Scientists say nations need to dramatically cut emissions to avoid catastrophic warming that would come with its own economic toll: devastating fires and floods, water scarcity, displacement, disease, and death.

It remains to be seen whether a moderate like Manchin can help bring about the change the planet demands.

In a bitterly divided Washington, Joe Manchin is a rare breed. A habitual aisle-crosser, he maintains strong friendships with Republican colleagues such as Sen. Lisa Murkowski of Alaska, the Energy Committee’s outgoing chair. He attacked Barack Obama’s environmental policies and voted to confirm more of Donald Trump’s Cabinet appointees than any other Democrat.

He claims to hate everything about Washington, sleeping on a houseboat named “Almost Heaven” rather than getting an apartment in the city.

But in 2018, when Manchin announced he was fed up with the Senate, party leaders talked him into running for another term, figuring he was probably the only Democrat in West Virginia who would win.

Manchin, 73, is a native son who made good: Star student in the small mining town of Farmington. Promising quarterback for the West Virginia University Mountaineers until a knee injury ended his career. Successful businessman who oversaw a coal brokerage before running for public office.

His political star rose even as his state grew more conservative. In 2004, the same year West Virginia voted for Republican President George W. Bush by a 13-point margin, Manchin was handily elected governor. He impressed constituents by pushing through new safety regulations in 24 hours after a mining disaster killed 14 people.

“What’s in it for West Virginia?” is Manchin’s guiding principle, former staffers say. The Paris climate agreement wasn’t good for the roughly 20,000 West Virginians who work in coal, oil and gas, he said. He argued that Obama’s Clean Power Plan would make electricity for his constituents less affordable.

Manchin also maintains a vested interest in his state’s fossil fuel industry. His most recent financial disclosures show that he holds stocks worth between $1 million and $5 million in Enersystems, the coal brokerage firm he used to run.

Fellow Democratic senators are understanding of his predicament. When Manchin talks with Sen. Brian Schatz, D-Hawaii, he draws an analogy between tourism in Hawaii and coal in West Virginia.

“He said, ‘Well, what would happen if someone came into your state and said your No. 1 industry is the problem?’” according to Schatz.

That doesn’t mean liberals haven’t tried to persuade him. In 2014, Manchin and Sen. Sheldon Whitehouse, D-R.I., arranged a cultural exchange. Manchin boarded a trawler on the Rhode Island Sound so fishermen could tell the coal state senator about how climate change had affected their livelihoods.

“I remember the captain of the trawler that we went out on saying to us: ‘Senator, this is not my father’s ocean any longer. Things are getting weird out there,’” Whitehouse said.

In turn, Whitehouse, who like Schatz is one of the most outspoken senators on climate change, took a trip to coal country, saying afterward that he had learned to see miners as “energy veterans” who needed to be considered in any climate legislation.

Some of Manchin’s stances have changed in parallel with the coal industry’s declining fortunes and climate change’s rising toll. The same man who once sued the EPA over restrictions on mountaintop removal mining eventually asked federal officials to study the environmental harm from the practice, saying, “I think the method has exceeded its useful life.”

In 2018, when Manchin was made ranking Democrat on the Senate committee that oversees energy resources and development, nuclear waste policy, and public lands, many environmentalists were outraged at the elevation of an outspoken advocate for fossil fuels.

He “simply can’t be trusted to make the bold, progressive decisions we need” on the Energy Committee, said Washington Democratic Gov. Jay Inslee, who ran unsuccessfully last year for the Democratic presidential nomination on a climate platform.

But working with Murkowski, Manchin pushed through a sharply divided Congress the biggest conservation legislation in a decade, helped fully fund the Land and Water Conservation Fund for the first time in a half-century and made sure the latest coronavirus stimulus bill included billions for solar, wind and battery storage.

“Folks are always trying to figure out his evolution, did he change because of this or that,” said Collin O’Mara, chief executive of the National Wildlife Federation and a friend of Manchin’s.

But the explanation is not so much a change of heart as a change of circumstances, O’Mara said. In light of the declining demand for coal - a consequence of shifting markets more than government regulation - Manchin sees clean-energy investments as a chance to create new jobs.

“Everything he’s done throughout his career [is] to make sure there’s some level of economic opportunity back home,” O’Mara said. “If you understand that about him, everything else makes sense.”

When the Democrats clinched control of the Senate with a pair of Georgia victories on Jan. 6, Manchin became not just the top lawmaker on energy but one of the most powerful people in Washington. Even laws approved through budget reconciliation - a process that requires a simple majority for passage - will rely on his support.

What a “golden opportunity to get compromise back,” Manchin recalled thinking that morning. After four years of Trump “playing to his base and that’s about it,” he said in a recent interview, “I think it’s great Democrats get to set the agenda and see if they can make this place work.”

Mere hours later, he found himself in an undisclosed location in the bowels of the Capitol, sheltering from rioters incited by Trump and some of Manchin’s own Republican colleagues.

While the mob raged, Manchin tried to reason with GOP senators who planned to object to the electoral college votes. At least two he lobbied, Sens. Steve Daines of Montana and James Lankford of Oklahoma, stood down. But in the end, eight returned to the chamber they’d fled and still voted to dispute the results.

Now, to have any hope of passing something as contentious as comprehensive climate legislation, some environmental activists argue that Democrats must be willing to bypass Republican objections by eliminating the filibuster, a tactic that blocks consideration of legislation unless 60 senators agree to end debate and move to a vote.

“The scientists have told us we have a handful of years, if not no time at all, to completely transform our society,” said Sunrise Movement spokesman Garrett Blad. He called it “naive” to think that such a plan would receive support from at least 10 Republicans, the minimum needed to join with 50 Democrats to pass legislation.

But if any Democrat could find common ground with the GOP, it’s Manchin, said West Virginia Rivers Coalition Executive Director Angie Rosser. She pointed to the success of the bipartisan energy package included in last month’s stimulus bill, which one green group heralded as “perhaps the most significant climate legislation Congress has ever passed.”

Manchin is saying little about how he will manage the Energy Committee as chairman - besides making sure that “there’s a balance between the environment and economy” and that no “heavy-lifting areas in this country” are left behind.

To that end, any major climate proposal with a chance of getting Manchin’s vote will in some way include “carbon capture” technology, which absorbs carbon dioxide before it exits smokestacks. That’s not only a way to allow coal- and gas-fired power plants to keep operating in a zero-emissions world, but a boon for West Virginia, which hosts an Energy Department lab in Morgantown that is a center for carbon capture research.

Rosser gives Manchin credit for acknowledging that the energy economy is changing while other West Virginia politicians still promise to “bring coal back.”

“To have someone like Joe Manchin speaking that truth . . . it’s a welcome thing because now we can talk about what’s next,” she said. “One of the reasons I’m excited about him being in this key position is that West Virginia needs someone who can lead on federal policy in a way that doesn’t leave us out.”

At the same time, fossil fuel groups still see him as a potential ally. “I think Senator Manchin is somebody that our industry can work with,” said Frank Macchiarola, senior vice president for policy at the American Petroleum Institute. “Hailing from a state that’s rich in coal and natural gas resources, he’s someone who recognized those are an important part of the mix as well.”

The biggest piece of Biden’s climate plan that requires congressional approval is a set of requirements on power plants to eliminate their contributions to climate change by 2035. Ever mindful of Capitol Hill dynamics, the former senator from Delaware made sure coal- and gas-fired power plants could continue to operate, as long as they captured the carbon they emitted.

Even so, Manchin is leery about setting a standard for power companies that depends on technology that isn’t yet cheap and effective enough.

Manchin is also wary of the Paris accord, which Biden moved to rejoin on his first day in office. The senator echoes Republican critiques that the international agreement, designed to keep the global temperature increase “well below” 2 degrees Celsius, demands too little of developing nations.

“There’s nobody I know in my state that wants to drink dirty water, to breathe dirty air, I can assure you,” he said. “I’m as environmental as anyone else. I’m pretty rational, practical about it, too.”