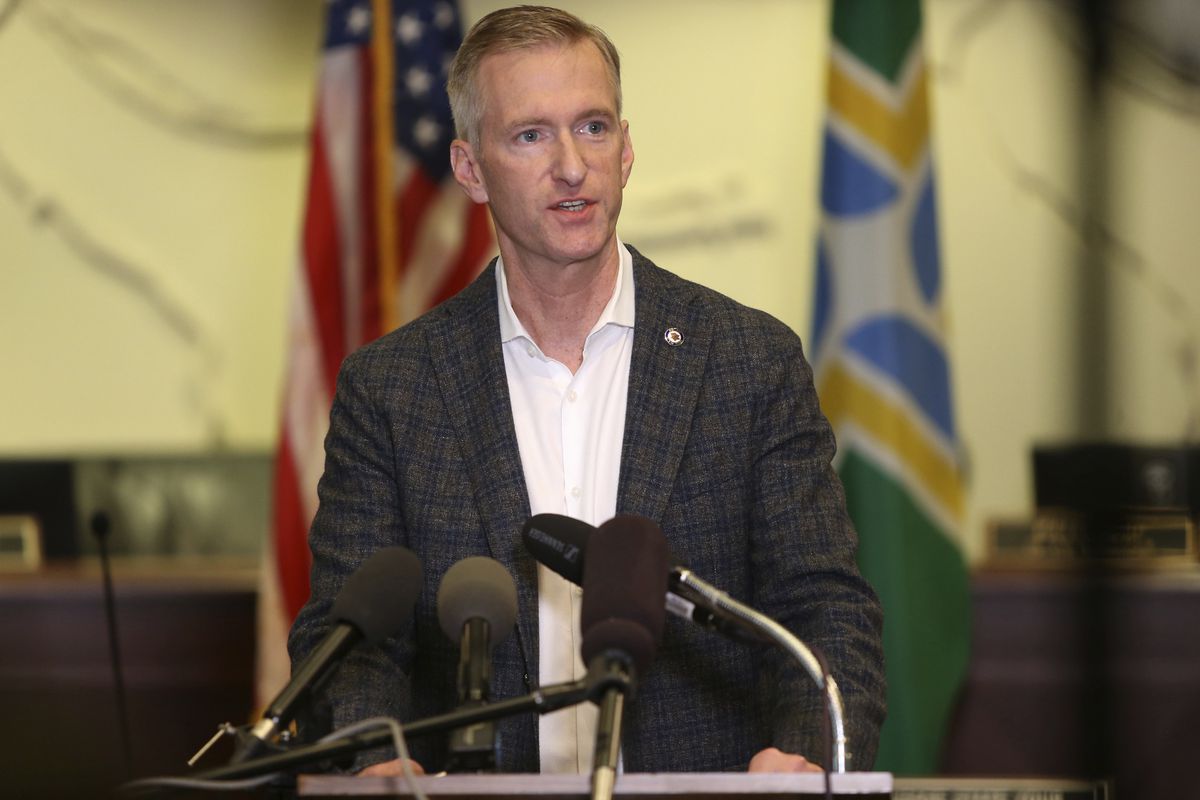 Portland Mayor Ted Wheeler calls for an end to violence in the city during a news conference Sunday, Aug. 30, 2020, a day after a demonstrator was shot and killed in downtown Portland on Saturday. (Sean Meagher/The Oregonian via AP)

Portland Mayor Ted Wheeler calls for an end to violence in the city during a news conference Sunday, Aug. 30, 2020, a day after a demonstrator was shot and killed in downtown Portland on Saturday. (Sean Meagher/The Oregonian via AP)

On Sunday, Portland Mayor Ted Wheeler was walking outside a craft brewery on the Oregon city’s southwest side when a man walked up to him and shouted, “Thanks for ruining the city!”

Moments later, the Democratic mayor blasted the man in the eyes with pepper spray.

“Oh my God!” the man cried in an audio recording of the encounter published by the Willamette Week. “Wow... I can’t see. The mayor has just thrown something at me.”

The encounter between Wheeler and the unidentified man was recorded by former Portland mayor Sam Adams, who later told police that the man, who was unmasked, had accosted them on the street with a video camera.

Tim Becker, a spokesman for the mayor’s office, told The Washington Post in an email Monday that Wheeler is cooperating with police “and encourages others involved to do the same.” Adams declined to comment.

The incident comes after a turbulent year for Portland’s mayor, who in July, was tear-gassed by federal agents while attending racial justice protests. He was later forced to move out of his condo in September after protesters broke windows and tossed a burning object inside the building. Earlier this month, Wheeler said a woman confronted him at another restaurant and later swatted him on the shoulder.

Over the past year, Wheeler has been highly criticized by protesters over his management of police amid last summer’s protest crackdowns. At one point, some urged him to resign for what they saw was an insufficient response to calls for police reform.

He’s also faced criticism for his early handling of the pandemic in the city. On Monday, the state’s department of health reported 291 new coronavirus cases and three deaths in Multnomah County, the city’s county seat.

Wheeler served as Oregon’s treasurer from 2010 until 2016, when he was first elected mayor of Portland. He was reelected for a second term in November.

On Sunday night, at about 8 p.m., Wheeler was leaving McMenamins Hillsdale Brewery & Public House after dining with Adams when a maskless, middle-aged man suddenly approached, the mayor later told the Oregon police department.

The man, who told Wheeler he had taken pictures of him at the pub, accused the mayor of disregarding COVID-19 safety measures during his meeting with Adams, Wheeler wrote in an emailed statement to police.

“He accused me of sitting in a restaurant without a mask,” Wheeler said. “... I informed him the current COVID regulations allow people to take their mask off for the purpose of eating and drinking.”

The man then followed him to his car while recording with his phone, Wheeler said, and refused to back away despite Wheeler’s multiple requests. He was within two feet of the mayor’s face, Wheeler told police.

That’s when the mayor said he gave the man a final warning: “I informed him that I was carrying pepper spray and that I would use it if he did not back off,” Wheeler told police. When the man didn’t comply, Wheeler said, he pepper-sprayed him in the eyes. The man, who appeared surprised, according to Wheeler, finally backed off.

“You just pepper-sprayed me for no reason at all,” the man says in the recording captured by Adams.

“Actually,” Adams said in the recording, “I was here, and you were like a foot from him. He asked you to back away, and you didn’t.”

Wheeler later described the man to the police as white man in his 40s.

Wheeler told police he feared the maskless man could infect him with the coronavirus, adding that he was also concerned for his personal safety following the incident where a woman allegedly smacked him in a restaurant earlier this month.

Before leaving, Wheeler said, he threw the man a bottle of water so he could wash out his eyes.

The Washington Post’s Hannah Knowles contributed to this report.