As Biden vows monumental action on climate change, a fight with the fossil fuel industry has only begun 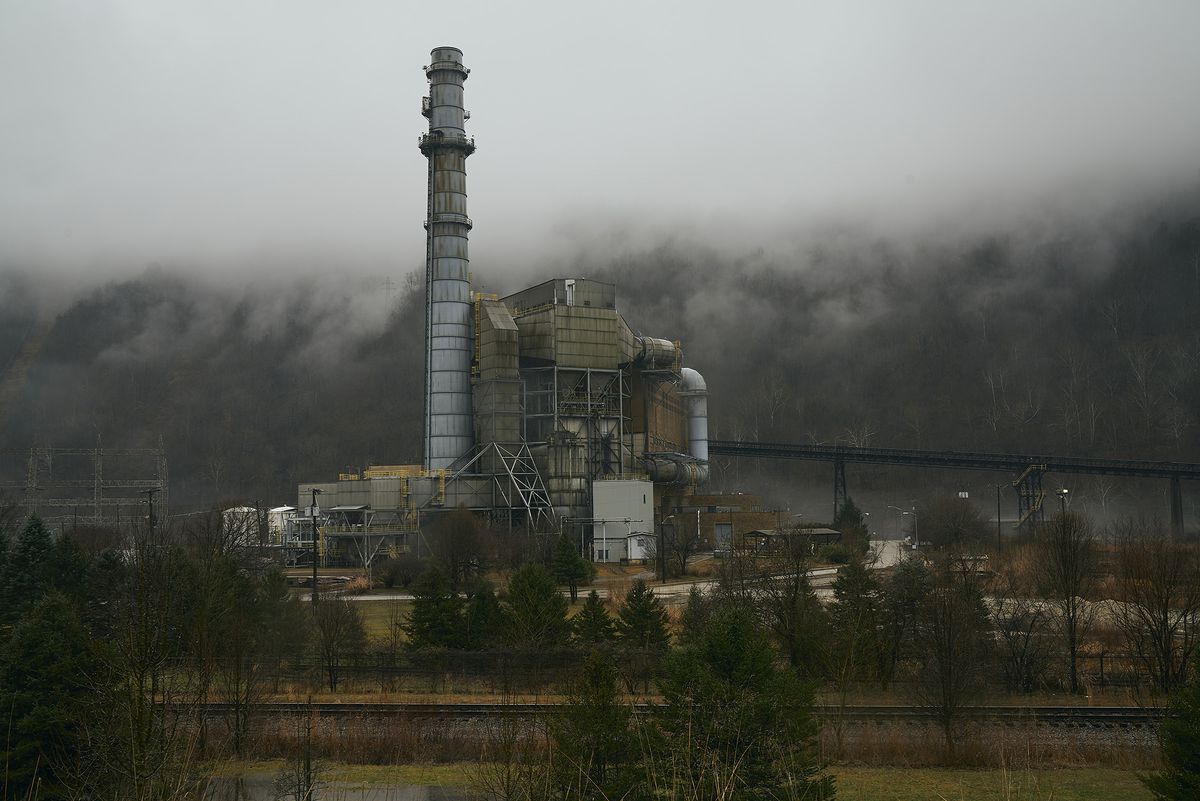 The closed Kanawha River coal-fired power plant located in Hansford, W.Va. is seen in 2020. (Stacy Kranitz for The Washington Post)

The closed Kanawha River coal-fired power plant located in Hansford, W.Va. is seen in 2020. (Stacy Kranitz for The Washington Post)

WASHINGTON - Joe Biden had long promised to become the climate president, and on Wednesday he detailed far-ranging plans to shift the U.S. away from fossil fuels, creating millions of jobs in renewable energy and conserve vast swaths of public lands and water.

“This is not a time for small measures,” Biden said at the White House, adding that the nation had already wasted too much time in dealing with the climate crisis.

But as he detailed his plans, the gas, oil and coal industries were already mobilizing on all fronts. From an oil patch in Alaska to state capitals to the halls of Congress, the industries and their allies are aiming to slow Biden’s unprecedented push for climate action and keep profits from fossil fuels flowing. Republican attorneys general from six states wrote to the new president, warning him not to overstep his authority. GOP lawmakers attacked his executive orders as “job killers.” And the petroleum industry revived television ads promoting drilling on federal lands.

Industry executives expressed dismay at the scope, speed and direction that Biden is heading, saying he is going much further than President Barack Obama ever did, while environmentalists said the danger that Earth faces is far more dire now than it appeared during Obama’s tenure and requires an extraordinary response. Last year essentially tied with 2016 as the hottest year ever recorded, and scientists say the planet is speeding toward irreversible damage.

In barely a week in office, Biden has moved to rejoin the Paris climate accord, halt the controversial Keystone XL pipeline, impose new limits on oil and gas production and mandate climate change as a priority across every federal agency.

On Wednesday, he promised to use the government’s purchasing power to fund a federal clean-car fleet - and the jobs that would come with it. He pledged to help low-income and minority communities that have historically suffered the worst pollution. And he insisted the nation must set about preparing for the inevitable impacts of climate change, even as it tries to stave off the worst future outcomes. He also said the U.S. will lead the world in the global effort to cut greenhouse gases that are driving climate change.

Biden’s aggressive proposals won broad praise from environmental activists and many fellow Democrats while setting off an intense battle with the U.S. fossil fuel industry, which has underpinned the nation’s economy for more than a century.

“This is a radical departure from almost any other administration, and I would even say, President Obama,” said Sen. Dan Sullivan, R-Alaska, echoing the sentiments of several others in his party and in the fossil fuel industry.

“Our states have led the charge in successfully challenging unauthorized and unlawful executive actions, as you know from your years as vice president,” West Virginia Attorney General Patrick Morrisey and five other Republican attorneys general wrote in a letter to Biden. Morrisey sued to block the Obama administration’s rule curbing greenhouse gas emissions from power plants. “You can be assured that we will do so again, if necessary.”

American Clean Power Association CEO Heather Zichal, who served as one of Obama’s top climate advisers, said no one should be surprised by Biden’s approach, given the mounting scientific evidence of the Earth’s continued warming and advances in recent years that have helped make renewable energy cheaper.

“If we’re going to remove 51 billion tons of greenhouse gas emissions annually and get to zero [emissions] in 30 years, this is going to require drastic action,” she said, adding that her members are prepared to invest $1 trillion in the coming years on clean energy projects. “We see nothing but opportunity.”

“It is now cheaper to deal with the crisis climate than it is to ignore it,” Kerry said, noting the massive sums taxpayers have spent recovering from increasingly devastating hurricanes in recent years. “We’re spending more money, folks. We’re just not doing it smart. We’re not doing it in a way that would actually sustain us for the long term.”

In a nation that remains heavily reliant on oil and gas but is shifting toward cleaner energy, the president and his deputies are aware they must take steps to blunt the short-term economic fallout on those impacted by the transition, or else having them unravel. To that end, the White House is establishing an interagency working group headed by climate coordinator Gina McCarthy and National Economic Council Director Brian Deese that will help communities grappling with the shift away from coal and other fossil fuels.

“We’re going to make sure that nobody is left behind,” McCarthy told reporters Wednesday. “We need to put people to work in their own communities. That’s where their home is. That’s where the vision is. So we are creatively looking at those opportunities for investment so that we can get people understanding that we are not trying to take away jobs.”

On his first day as president, Biden rescinded the permit for the Keystone XL pipeline - a project that enjoys the support of some building trade unions - and on Wednesday, he announced an indefinite halt to new oil and gas leasing on federal lands and waters.

In an interview just after the November election, the American Petroleum Institute’s senior vice president of policy, economics and regulatory affairs, Frank Macchiarola, said his group was aware of Biden’s plan to impose a leasing moratorium. “But we also recognize that that was a campaign proposal, and campaigning is often different from governing,” he said at the time.

Some oil crews have suspended work in reaction to news out of Washington.

Dave Cruz’s construction crew had already traveled 100 miles by snow trail to “the middle of nowhere” on the Alaska tundra last week and were getting ready to prepare a five-acre well pad made of ice when they learned of the tighter restrictions under the Biden administration.

“I hate to tell you guys, we’ve got to let you go,” Cruz said he told his nearly 50-person crew on the National Petroleum Reserve-Alaska, the nation’s largest swath of public land. The Interior Department is poised to issue the permit soon, which would allow the crew to return.

The fossil fuel industry also has encouraged tribal, state, local and labor leaders to weigh in. Biden’s aides clarified this week that any restrictions on new leasing or permitting does not apply to Indian Country, since federal officials would first have to engage in formal consultations with those sovereign nations.

“A delay in energy permitting in the middle of the coronavirus pandemic would have been devastating to our economy and the health and safety of our tribal members,” said Ute Indian Tribe Business Committee Chairman Luke Duncan, whose tribe has a drilling operation in Utah.

Biden has taken office at an inflection point in U.S. energy policy, where fossil fuels dominate transportation and electricity generation, even as they are starting to lose ground to both market forces and shifting public opinion.

David Slater, chairman of the board of the Interstate Natural Gas Association of America, told reporters Tuesday that natural gas accounted for the largest source of U.S. electricity in 2019, at 38%, and the Energy Information Administration projects America’s overall natural gas consumption will “grow slightly” by 2050.

At the same time, the oil and gas industry has suffered a series of recent economic setbacks. Tom Sanzillo, director of finance at the Institute for Energy Economics, noted these companies accounted for 28% of the U.S. stock market in 1980, but just 2.3% of it as of this month.

“The oil industry doesn’t have a plan for its future. They want to drill wherever they want, whenever they want,” Sanzillo said. “What Biden is doing is saying, ‘We need to reduce the supply, because the industry is not doing it.’ "

The Trump administration offered more than 103 million acres of oil and gas leases, according to Interior, of which just 10.6 million acres sold. The industry has a considerable stockpile of leases: 53% of those onshore are unused on not producing, along with 77% of those offshore. And in December alone, the Bureau of Land Management signed off on 847 drilling permits, a rate roughly double what it had approved each month between June and November.

[As Alaska warms, one village’s fight over oil development and the future]

Rystad Energy’s head of shale research, Artem Abramov, said that the pause in new federal leasing would have “little impact” on oil and gas production in federal land, including in New Mexico’s gas-rich Permian Basin.

Taylor McKinnon, senior public lands campaigner at the Center for Biological Diversity, noted that federal leases sold since 2017 would release 1.9 billion tons of greenhouse gases alone. All of the oil, gas, coal, oil shale and tar sands the U.S. government has leased holds more than 20 times that warming potential, he added.

Whatever legislative, lobbying and legal battles lie ahead, those who have long hoped for strong climate action from the federal government cheered Biden’s actions Wednesday, saying he is pursuing the right path for the country - and for the planet.

Sen. Sheldon Whitehouse, D-R.I., has delivered a “Time to Wake Up” speech about climate change nearly every week the Senate has been in session for the past nine years, frustrated that the U.S. government wasn’t acting more purposefully. On Wednesday, he delivered his 279th speech. It would be his last, he said, because President Biden was forcing the country to finally act.

“So instead of urging that it’s time to wake up,” he said, “I close this long run by saying now it’s time to get to work.”