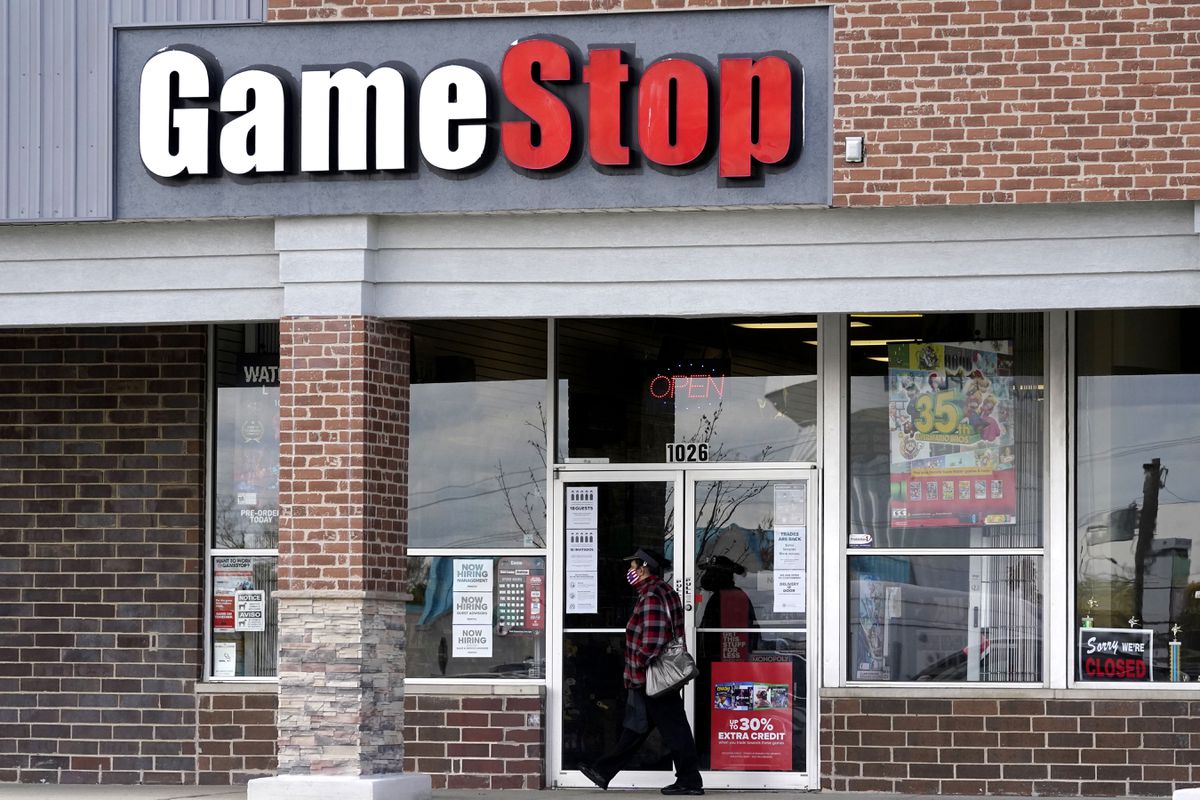 Two hedge funds are bowing out of their short positions on the money-losing video game retailer. Citron Research’s Andrew Left said in a video posted on YouTube that his company is going to become more judicious in shorting stocks. Melvin Capital is also exiting GameStop, with manager Gabe Plotkin telling CNBC that the hedge fund was taking a significant loss. (AP Photo/Nam Y. Huh, File)

Two hedge funds are bowing out of their short positions on the money-losing video game retailer. Citron Research’s Andrew Left said in a video posted on YouTube that his company is going to become more judicious in shorting stocks. Melvin Capital is also exiting GameStop, with manager Gabe Plotkin telling CNBC that the hedge fund was taking a significant loss. (AP Photo/Nam Y. Huh, File)

Robinhood and other retail brokerages are taking steps to tamp down the speculative frenzy surrounding companies such as GameStop, but the actions only sparked more volatility in the market and an outcry from users of the platforms and some members of Congress who say small investors are being treated unfairly.

GameStop stock has rocketed from below $20 earlier this month to close around $350 Wednesday as a volunteer army of investors on social media challenged big institutions who had placed market bets that the stock would fall.

Robinhood said Thursday that investors would only be able to sell their positions and not open new ones in some cases. Robinhood will also require investors to put up more of their own money for certain trades instead of using borrowed funds.

Interactive Brokers also limited options trading in AMC, BlackBerry, Express, GameStop and Koss. Clients can close out positions, but not buy more options, a move the company said was due to extraordinary volatility in the markets. It also tightened margin requirements indefinitely on “short stock positions.”

The frenzy surrounding shares of GameStop, AMC and others has drawn in an influx of investors with little or no experience trading stocks. That poses a challenge for brokerages that cater to small investors, said Andy Nybo, managing director at Burton-Taylor International Consulting.

“The brokers were forced to take action because they would be in the firing line if an unsophisticated investor loses money,” he said.

Robinhood’s stated goal is to “democratize” investing and to bring more regular people into investing. The company has forced huge, ground-shaking changes for the brokerage industry, such as its decision to charge zero commissions for customers trading stocks and exchange-traded funds. That’s why some users took Thursday’s actions as an affront.

At least one lawsuit was filed Thursday in U.S. District Court in New York claiming Robinhood manipulated the market by restricting investors’ access to trading GameStop.

Robinhood investor Carlos Amaya said the app’s action Thursday was a disappointment to users like him who prided themselves on being a “different breed of investors.”

The 28-year-old school operations manager in Washington, D.C., said his parents immigrated from El Salvador and he was the first person in his family to buy stocks when he started using the app in 2017. He’s since made several thousand dollars.

“We pride ourselves in the name Robinhood because we’re trying to make more money and be the next people at the top,” he said. “You would expect Robinhood to let us do our thing instead of blocking us and saying it’s for our protection.”

Ziad Cohen, another Robinhood user, said he’ll ditch the trading portal once he sells his GameStop shares. He bought 85 shares last week, and says he is ahead by $20,000, even with the stock’s decline Thursday. The 19-year-old college student from Los Angeles plans to use that money to pay rent and his student loans.

“I feel pretty good about it,” Cohen said.

Investors upset over the trading portals’ restrictions are getting some sympathy from some members of Congress.

Democratic Sen. Sherrod Brown of Ohio, who is set to become chairman of the Senate Banking Committee, announced that he will hold a hearing on the GameStop situation. Rep. Maxine Waters, D-Calif., also announced a hearing in the House Financial Services Committee.

Rep. Alexandria Ocasio-Cortez, D-N,Y., called Robinhood’s actions “unacceptable,” and said she would support a hearing to explore why the online brokerage is blocking small investors from buying stocks while hedge funds “are freely able to trade the stock as they see fit.”

Kalen Holliday, a spokeswoman for Interactive Brokers, said the company’s restrictions apply both to individual and institutional investor accounts.

In a statement Thursday, Khana called for “more regulation and equality in the markets,” and accused Wall Street of spending billions to “crush” GameStop and “put workers out of business” instead of investing in future technology.

The recent surge in GameStop has been the product of a tug-of-war between small investors and some big institutions. Citron Research and Melvin Capital had placed bets that GameStop shares would fall as the company tries to transform itself from a bricks and mortar retailer to a seller of online video games.

But smaller investors rallied to the stock. By sending GameStop shares soaring higher, they forced the big players to cover their bets by buying the stock, increasing the price even further. But there is some concern that small investors could face significant losses when and if stocks like GameStop plummet.

The Securities and Exchange Commission said Wednesday that it is monitoring the stock and options markets. Protecting investors is one of the jobs of the SEC, but it’s not clear what the agency can do in a case like GameStop, said Chester Spatt, a former chief economist at the SEC and a finance professor at Carnegie Mellon University.

Smaller investors are using Reddit and other discussion boards to encourage each other to buy GameStop, but that may not be much different than big investment houses giving their brokers marching orders each morning on which stocks to try to push that day, he said.

“There’s not necessarily the obvious coordination here that one thinks of in a case of manipulation,” Spatt said. “But regulators may view this as a mechanism for manipulation.”

Regardless, Spatt said regulators will likely feel pressure to look at it deeply. “At some point, things shooting up in these kinds of ways are going to come crashing down,” he said. “People are going to be crying out, ‘Where were you, and why didn’t you protect these investors?’”

Robinhood itself has been the target of regulators, settling charges late last year of not getting the best prices for investors trading on its app and that it didn’t fully disclose the risks involved in trading stocks and options.