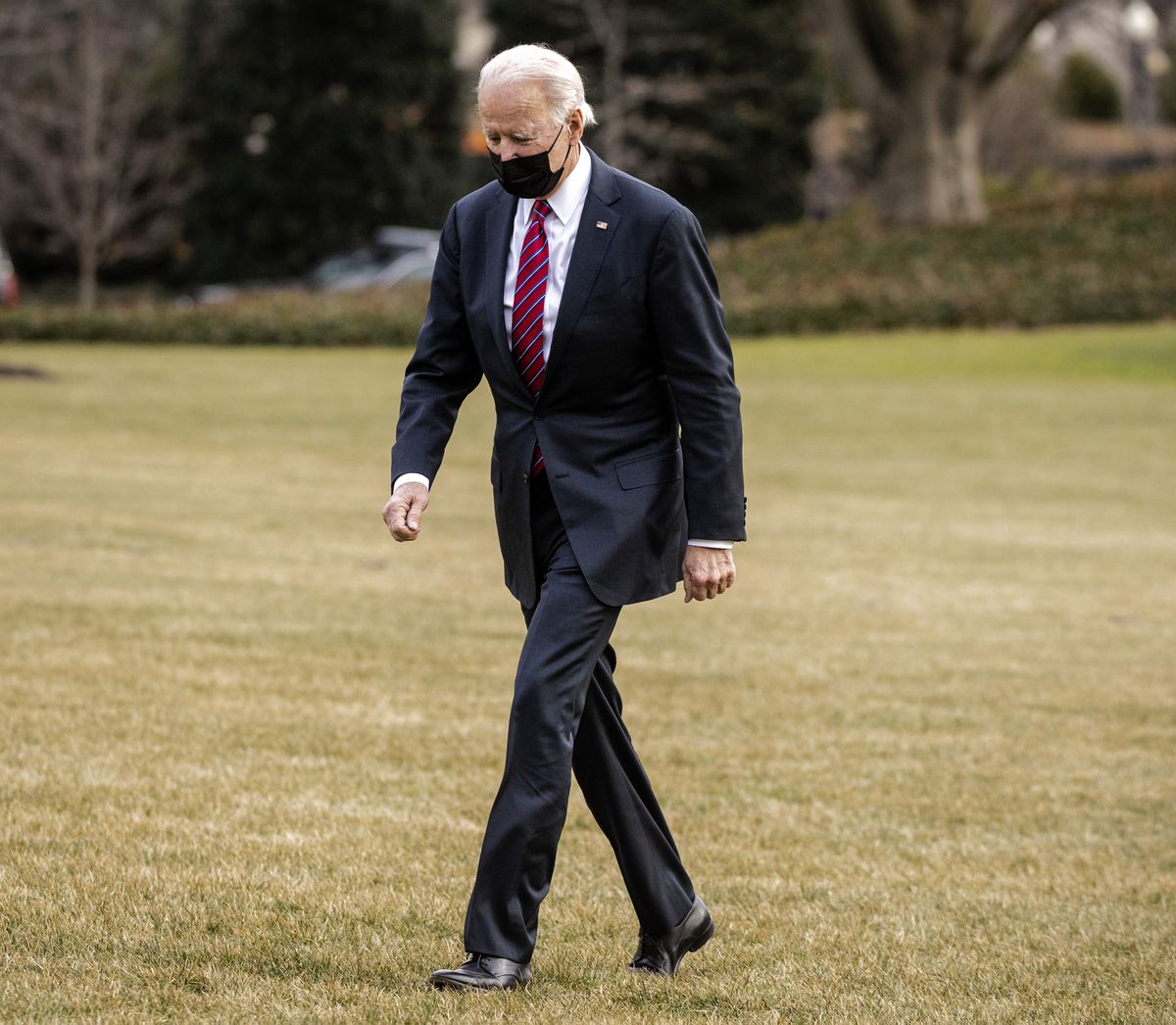 President Biden arrives back at the White House on Jan. 29. MUST CREDIT: Washington Post photo by Bill O'Leary.

President Biden arrives back at the White House on Jan. 29. MUST CREDIT: Washington Post photo by Bill O'Leary.

WASHINGTON — Shortly after his brother won the presidency, Frank Biden, who works for a Florida law firm called Berman Law Group, spoke to a local television station about his tight connection with Joe Biden.

“We’ve all always been close,” Frank Biden told WPBF, saying he’d talked to the president-elect just the day before, for his birthday. “But we’re closer now.”

Viewers could hardly miss Frank Biden’s employer, since he was wearing a black T-shirt emblazoned with a “TBT” logo, his firm’s shorthand for “The Berman Team.” And in Frank’s case, the shirt also spelled out another meaning for TBT: “The Biden Team.”

As President Joe Biden enters his third week in office, the firm where his brother is a “non-attorney senior adviser” has aggressively touted its ties to power - emphasizing the brothers’ connection, declaring that their values are aligned, highlighting Biden’s policies as it advertises its services, and generally playing up Frank Biden’s role even on cases where he is not involved.

The White House, which boasts of its strict ethics policy, has yet to publicly issue rules for Biden’s family members, even though his relatives’ business dealings have created problems for him before. A White House official said a process is in place, involving the counsel’s office and representatives of the family, to address potential conflicts of interest as they arise. But the official, who spoke on the condition of anonymity to discuss a matter that has not yet been announced, declined to provide details.

As Biden seeks to break dramatically from the mingling of family and government that characterized Donald Trump’s presidency, Frank Biden’s activities could muddy the message. At issue is his work at the small Boca Raton-based firm, which long focused on personal injury cases but in recent years has sought to expand its horizons and play on a bigger field, in part by hiring Frank Biden in 2018.

After Joe Biden’s inauguration in January, Berman Law Group moved swiftly to capitalize on his immigration policy shifts. In a social media post, it highlighted the president’s halt to deportations while pitching a “free consultation” to anyone seeking its services. The firm deleted those posts Sunday, hours after a reporter from The Washington Post inquired about them.

In a newspaper ad that ran on Inauguration Day, Berman Law Group boasted about a class-action lawsuit it had filed against sugar cane growers, stressing that the case came “against the backdrop of incoming President Joseph Biden Jr.’s commitment to environmental and social justice, a value shared by his brother and Berman Law Group senior adviser, Frank Biden.”

Several months earlier, as Biden was locking up the Democratic nomination, the firm filed two class-action lawsuits against China for its role in the coronavirus pandemic - in both cases, noting Frank Biden’s role at the firm when announcing the suits, though a partner said he was not involved in them.

In what one of the partners described to Newsmax as “a multitrillion-dollar lawsuit,” the firm demanded to know whether the virus a Chinese weapons lab created the virus. The suit faces long odds, legal experts say, but it has significantly raised the firm’s profile.

Frank Biden did not respond to an email seeking comment.

A White House spokesman said President Biden is committed to ethical behavior by his family as well as his staff.

“President Biden has set and maintained the highest ethical standards for himself, his administration, and those around him, and he has pledged an ‘absolute wall’ with any family member’s private business interests,” said the spokesman, Michael Gwin. “Any implication to the contrary is flatly untrue and unsupported by the facts.”

Gwin added that Frank Biden has not consulted with his brother on any business matter, and that no one from Berman Law Group has contacted the Biden team in regard to its legal activities.

Matthew Moore, a partner with Berman Law Group, agreed. “We have not spoken with Federal Government officials about any of our cases,” Moore said in an email. “There have been no discussions between the firm (including Frank Biden) with President Biden, the campaign, transition, or administration about the law firm or any cases, including China related matters, nor will there be.”

When it hired Frank Biden in 2018, the firm cited his experience in business and government as a boon for its clients. It recounted his work with nonprofit organizations as well as his stint as a legislative liaison in U.S. Government Printing Office under President Bill Clinton, and it noted his work on Joe Biden’s campaigns.

“Joe Biden’s brother joins The Berman Law Group,” said one statement posted by the firm on Instagram at the time, using the original styling of the firm’s name. In a March 2019 advertising section in the Boca Raton Observer, also posted to the firm’s Instagram account,it said Frank Biden would offer clients “an unrivaled personal network of contacts.”

During his presidential campaign, Joe Biden was forced to answer questions about his son Hunter’s tenure on the board of Burisma, a Ukrainian energy company, at the same time Biden himself was serving as the Obama administration’s point man on Ukraine.

Separately, Hunter Biden is now facing a federal investigation over taxes paid on a business venture in China. He has said that he handled his taxes “legally and appropriately.”

Biden has promised that family conflicts of interest will not be tolerated. “My son, my family, will not be involved in any business, any enterprise, that is in conflict with or appears to be in conflict,” he told CNN in December.

Administration officials plan to follow up on the president’s words with procedures that would prevent even the appearance of conflicts of interest, a Biden official told The Washington Post last month. But no such policy has yet been announced, and it’s unclear how it would be enforced.

And it is unclear how such a policy might apply to issues such as the China lawsuits pursued by Frank Biden’s firm, which could put him at odds with administration policy or complicate diplomatic relations with the superpower.

Joe Biden, 78, is the oldest of four siblings. They include Valerie Biden Owens, 75, his sister and longtime political adviser; James Biden, 71; and Francis Biden, who goes by Frank, 67.

Frank Biden has invoked his famous last name in the past — for example, when he was working to help a for-profit company open charter schools in Florida. At the time, he denied using his brother’s name to advance his business endeavors.

“I never invoke his name other than to tell people I am his younger brother and I love him,” he told The Washington Post in December 2011.

Frank Biden was hired by Berman Law Group as an adviser about nine months before his brother entered the Democratic presidential primary. At the time, the firm was seeking to expand beyond its traditional focus on personal injury suits to offer a wider range of services including, as the firm put it, “high-profile government relations consulting” led by Biden.

A prime example was the firm’s launch last year of the lawsuits against China. It was not alone; at least a dozen law firms — and two states — have attempted to sue China on behalf of COVID-19 patients.

Frank Biden was not involved in the China cases, Moore said in an emailed statement to The Washington Post, although Berman Law Group highlighted his role at the firm in material promoting both lawsuits.

The China lawsuits are unusual because congressional action — and the president’s signature — are usually required for such cases to move forward, according to two experts in sovereign immunity, which means the issue could land on President Biden’s desk.

The White House declined to say whether it supports covid-related suits against China. A spokeswoman from the Chinese Embassy in Washington did not reply to an email seeking comment.

The two suits were filed as Joe Biden was locking up the Democratic nomination in early 2020. The first — which holds China broadly responsible for the pandemic — does not specify the damages it is seeking. But Jeremy Alters, the firm’s chief strategist, told Newsmax they could amount to “trillions” of dollars, and said to Fox News they could come to “tens of trillions of dollars.”

The second lawsuit accuses the Chinese government of “hoarding, stockpiling and intentionally cornering the market on PPE,” or personal protective equipment.

Experts said the bar is high for the COVID-19 litigation to move forward, but it has already raised Berman Law Group’s profile and the firm has been featured in national outlets such as Fox News, Newsmax, Bloomberg News and the news site Cheddar.

“The law group is backed by some big names, including Frank Biden, Joe Biden’s brother,” a Cheddar presenter said in introducing a segment on the lawsuit. During the interview, Alters — who spoke from an office featuring a blue surfboard - said that “the government would be helpful, but not necessary” for allowing the plaintiffs to seize Chinese assets in the United States.

Frank Biden drew fresh scrutiny last week after Berman Law Group ran an “advertorial” in a South Florida business newspaper, highlighting his role with the firm and his connection to his brother. The firm’s lawsuit against sugar cane growers and President Biden’s support for the Paris climate accords both stemmed from the brothers’ environmental values, the ad said.

Berman Law Group is based in a one-story pale yellow building with a cherry-red roof not far from the ocean. The firm’s online material suggests camaraderie, including a photo of 11 women standing shoulder to shoulder in front of the building last November with the caption “Paralegal Power.”

The firm was founded by twin brothers Theodore and Russell Berman, and social media posts include frequent testimonials from clients who have been in car accidents. The Berman brothers referred questions to Moore.

In July 2018, when the firm hired Frank Biden, it also added former Florida state senator Joseph Abruzzo. The two hires were depicted as part of the firm’s move beyond personal injury work into more sophisticated areas.

“Bringing on Frank Biden and Joe Abruzzo is consistent with our vision and passion for helping our clients in Florida and throughout the country,” the firm said in an ad.

The firm said that Frank Biden, in addition to his “unrivaled personal network of contacts,” offered clients “the benefits of more than 40 years of service in Washington” and “a deep understanding of federal, state and municipal governments.”