Some states are racing ahead of others with their coronavirus vaccine rollouts. Their secret? Keeping it simple. 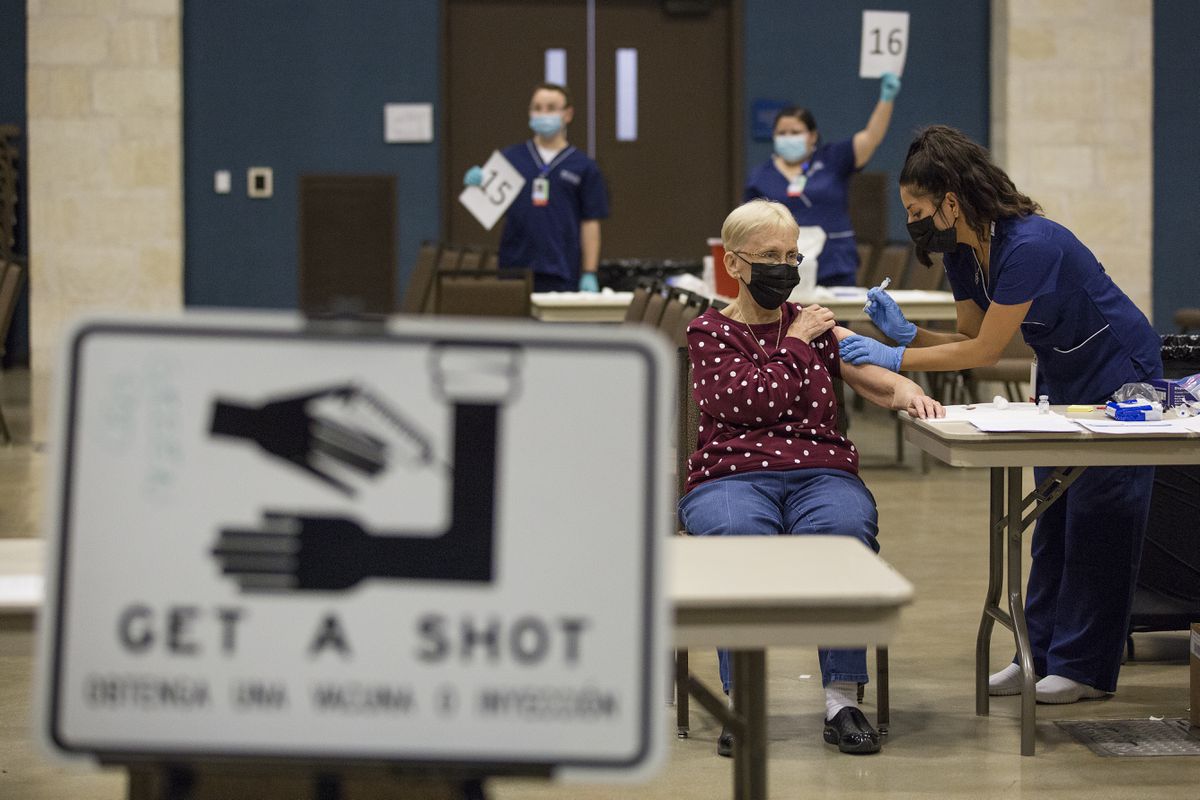 FILE - In this Jan. 21, 2021, file photo, Edna Becker receives the Moderna coronavirus vaccine from nurse Patricia Torres at the mass vaccination clinic at the New Braunfels Civic/Convention Center in New Braunfels, Texas. As the nation's COVID-19 vaccination campaign accelerates, governors, public health directors and committees advising them are holding key discussions behind closed doors, including debates about who should be eligible for the shots and how to best distribute them. (Mikala Compton/Herald-Zeitung via AP, File)

FILE - In this Jan. 21, 2021, file photo, Edna Becker receives the Moderna coronavirus vaccine from nurse Patricia Torres at the mass vaccination clinic at the New Braunfels Civic/Convention Center in New Braunfels, Texas. As the nation's COVID-19 vaccination campaign accelerates, governors, public health directors and committees advising them are holding key discussions behind closed doors, including debates about who should be eligible for the shots and how to best distribute them. (Mikala Compton/Herald-Zeitung via AP, File)

They all started in the same place, with no one immunized, no stockpiles of vaccine and no choice but to dive in immediately with perhaps the most high-stakes public health campaign in American history.

Seven weeks later, the nation’s states are all racing to deliver a potentially lifesaving coronavirus defense to millions of arms. But some are having far more success than others.

In the states moving fastest, up to 1 in 7 people had received at least their first injection as of Tuesday, according to data compiled by The Washington Post. At the other end of the rankings, it was 1 in 18.

Health experts had expected the wide disparity given that states were granted broad latitude to devise their own strategies, with conspicuously little federal coordination. Far less predictable were the states that would be leading the way, as well as those lagging behind. On either end, it has been a mix of large and small, urban and rural, red and blue.

Yet if there’s one thing the states moving most quickly have in common, it is that they have tried to bring at least some measure of order and simplicity to a process otherwise marked by chaos and complexity.

In South Dakota, distribution of the vaccine has been limited to a small number of health-care providers who meet via phone twice a week and can make decisions on the fly as conditions change.

Connecticut has teamed with a well-established partnership network, while using community ambassadors to advocate for the vaccine among populations where hesitancy runs high.

And West Virginia has tightly coordinated its rollout efforts, using the National Guard to speed supplies to where they are needed while streamlining the rules for who can get immunized.

Officials in all three states say that while coronavirus vaccination is inevitably complicated, they want to keep it from being any more confusing than necessary.

“If you want to know how many cows are in a field, just count the egg-sucking cows,” said West Virginia Gov. Jim Justice, R. “Don’t count the legs and divide by 4.”

That ethos has helped propel his state to a position that much wealthier and healthier states can only envy. West Virginia may have one of the lowest per capita incomes in America - along with some of the highest levels of chronic conditions — but it has been among the most prolific in protecting its citizens against the coronavirus. As of early this week, 11% of the state had received at least their first shot, the second-highest rate in the nation, according to The Post tracker.

“People think we’re the poorest or most backward or whatever it may be,” Justice said in an interview. “But West Virginia has become the diamond in the rough.”

The state’s record has won it accolades from public health professionals, as well as notice from the Biden administration. Just 90 minutes after the new president was sworn in last month, Justice, a Republican, said he had a call from the administration’s new coronavirus coordinator, Jeff Zients, inquiring whether West Virginia’s success might offer lessons outside the Mountain State.

Tinglong Dai, who teaches at Johns Hopkins University’s business and nursing schools, said it certainly does.

In many states, Dai said, governors have delegated the vaccination process to a web of underfunded county health departments, along with hospitals, pharmacies, HMOs and doctor’s offices. Each has devised its own sign-up systems and made its own rules for who can get vaccinated and when.

West Virginia has sought to avoid that — to the extent possible — by creating a uniform statewide process.

“The U.S. has a very, very decentralized health-care system,” Dai said. “But we need coordination. We need leadership. We need clarity.”

In West Virginia’s case, that meant becoming the only state to opt out of a federal program to vaccinate workers and residents at nursing homes and other care facilities.

While the program featured partnerships with national chains Walgreens and CVS, West Virginia incorporated local drugstores into its plans. It managed to wrap up the work “before most states had even started the process,” said Dai, who studied the state’s process.

West Virginia has also leaned heavily on the National Guard, using its expertise in logistics management to ensure that vaccine distribution is well organized. And the governor has closely managed the process of determining who gets priority, while giving counties far less leeway than in other states to make their own rules.

South Dakota is another state ranked near the top both in the percentage of residents who have received a shot and percentage of the state’s vaccine supply administered.

As with West Virginia, its rural character had threatened to become a barrier to a rapid rollout, with far-flung communities and many living miles from the nearest medical facility.

Other states with large rural populations — including Idaho, Alabama and Iowa — have struggled to scale up their immunization campaigns, putting them at the back of the pack in per capita vaccinations.

But South Dakota has been able to use its small size — and especially its limited number of health-care providers - to its advantage. Instead of leaving it up to county health departments, the state has tasked its largest providers with getting the vaccine out the door and into patients’ arms.

Twice a week, the companies — normally competitors — speak by conference call, along with state officials. No more than 15 people are on the line. If one provider is running short on doses or falling behind, the others can shift resources to help.

“That simplicity of being able to make decisions quickly on the fly works really well,” said David Basel, vice president of clinical quality with Avera Medical Group, the state’s largest provider. The scaled-down system, he said, “cuts through all the red tape, and we can just go.”

The group, he said, has a few inviolable rules: Never waste a dose. Never leave a dose in the refrigerator over the weekend. And never break the mutually agreed hierarchy for who is eligible to be vaccinated at any given time.

“If one of us vaccinates one teacher, all the teachers in the state will want the vaccine tomorrow,” said Basel, who is also a practicing internist and pediatrician. “The rumor mill goes nuts.”

That has been a problem in many states, where differing eligibility rules between counties — or even within counties — have sown confusion.

Some states, though, may have little choice, given their scale, experts say. California’s largest county, for instance, has more than three times the population of West Virginia and South Dakota combined.

“The states that have been able to centralize have, in the early weeks, been able to be more efficient,” said Hemi Tewarson, a fellow at the Duke Margolis Center for Health Policy. “But for some states it’s going to be a really tall order to centralize everything.”

California is among the large states that have been slower to roll out their campaigns, along with Texas, Illinois and Pennsylvania.

But speed, said Jennifer Kates, senior vice president at the Kaiser Family Foundation, is not the only measure of a state’s vaccination success. Also essential is making sure that those most vulnerable to death or serious illness are prioritized, and that disadvantaged communities are served alongside affluent ones.

“That’s harder to do and it can take longer,” Kates said. “It’s coming up against speed, and it’s creating a trade-off.”

Already, some states have begun to deprioritize front-line workers, a signal to critics that they are sacrificing equity concerns in the name of swiftness.

Connecticut’s acting public health commissioner Deidre Gifford said one of her biggest challenges is balancing the two. The state has delivered at least a first vaccine dose to 10 percent of residents — the fourth highest in the nation. It is also closely tracking its performance in towns and cities that score high on the social vulnerability index.

Gifford said the state relied heavily for its rollout on community partnerships that were established early on in the pandemic, when Connecticut was ramping up testing. “There was a glide path there that didn’t need to be built,” she said.

It has also deployed health ambassadors to underserved communities, and set up public information campaigns to dispel myths about the effectiveness and safety of the vaccine.

But as with other leaders across the country, Gifford said her biggest challenge was not convincing people to get vaccinated. It’s getting adequate supplies.

“More people want vaccine than we have vaccine to give,” Gifford said.

The Biden administration has said it intends to change that, ramping up distribution as drugmakers step up their production. If it’s successful, that could create a very different dynamic — and an opportunity for new states to emerge as leaders in the vaccination race, said Eric Schneider, senior vice president at the Commonwealth Fund.

While the early campaigns nationwide have focused on relatively easy targets — such as front-line health-care workers or nursing home residents — the challenge ahead will be different. As scarcity ends and supplies proliferate, the emphasis will shift to populations that are more difficult to reach, Schneider said.

“With any luck, in a month we’ll be in an abundance situation. And at that point the question of whether health systems can reach underserved populations will be the big test,” said Schneider, whose organization advocates for broader and better health-care access.

“We’re in a long horse race, and we’re just getting out of the gate.”