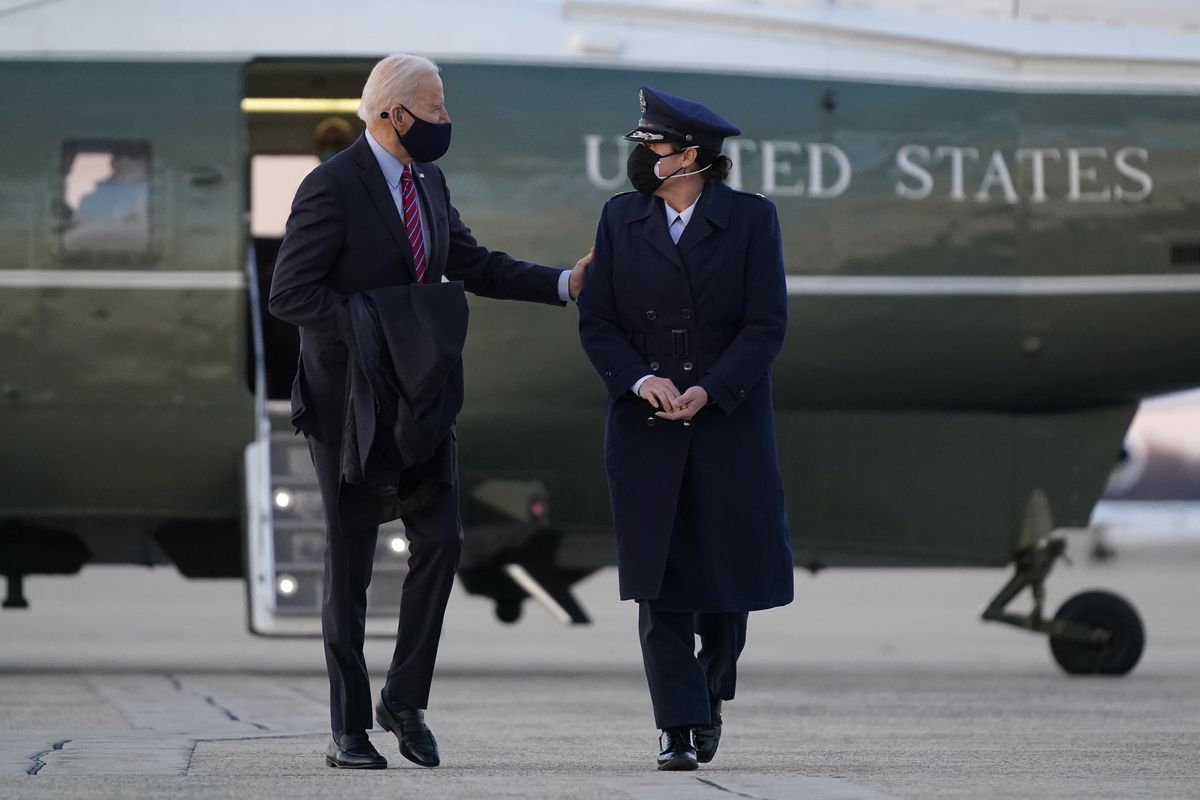 President Joe Biden speaks with a member of the U.S. Air Force after handing her a challenge coin as he walks to Air Force One at Andrews Air Force Base, Md., Friday, Feb. 5, 2021. (AP Photo/Patrick Semansky)

President Joe Biden speaks with a member of the U.S. Air Force after handing her a challenge coin as he walks to Air Force One at Andrews Air Force Base, Md., Friday, Feb. 5, 2021. (AP Photo/Patrick Semansky)

WASHINGTON - President Joe Biden said Friday that former president Donald Trump should not have access to classified information in the form of the briefings usually given to ex-presidents, citing Trump’s “erratic behavior” and the risk that he might recklessly reveal sensitive information.

Biden stopped short of announcing that he had officially decided to prevent his predecessor from receiving the briefings, which are traditionally given before former presidents travel abroad, particularly in an official capacity. But Biden has the unilateral authority to deny intelligence access to anyone he chooses, and his remarks amounted to a statement that Trump - who for four years controlled the entire U.S. security apparatus - was himself a security risk.

Denying the briefings to a former president would be an unprecedented action, and Biden’s remarks, made during an appearance on the “CBS Evening News” with Norah O’Donnell, emphasized the president’s concern, and that of other officials, that Trump poses a risk to national security because of what he might disclose.

Asked by O’Donnell whether Trump should receive the briefings, Biden replied, “I think not.”

White House press secretary Jen Psaki, during her daily press briefing Monday, when asked whether the Biden administration would provide Trump with intelligence briefings, said that she had raised the question with Biden’s national security team and that the issue was “under review.”

The White House on Friday did not immediately clarify whether Biden’s comments to CBS News represented an official White House policy or was simply an expression of the president’s opinion in response to a question.

A spokesman for Trump did not respond to requests for comment.

Explaining his reason for wanting to withhold sensitive information from Trump, Biden said, “because of his erratic behavior unrelated to the insurrection.”

That was a reference to the events at the heart of the Senate impeachment trial that Trump faces next week. Trump was impeached after encouraging a throng of supporters on Jan. 6 to march to the Capitol in an effort to pressure Congress as it moved to certify Biden’s electoral college victory. A mob broke into the Capitol, forcing Congress to suspend its proceedings and resulting in several deaths.

The Washington Post reported in May 2017, for example, that Trump had revealed highly classified information to the Russian foreign minister and the Russian ambassador to the United States during a White House meeting, jeopardizing a valuable source of intelligence on the Islamic State.

In Friday’s interview, O’Donnell pressed Biden on his past characterizations of Trump.

Biden replied, “Yeah, I have. And I believe it.”

When asked to describe his “worst fear” were Trump to continue receiving classified information, to which he had unrestricted access as president, Biden said, “I’d rather not speculate out loud. I just think that there is no need for him to have the - the intelligence briefings.”

He added, “What value is giving him an intelligence briefing? What impact does he have at all, other than the fact he might slip and say something?”

Even before Trump left office, it was clear that his post-presidential life, like his time in office, would deviate starkly from tradition. He declined to attend Biden’s inauguration or welcome him to the White House, as departing presidents have done for their successors for decades. And now he faces an impeachment trial for an alleged offense during his presidency.

“President Biden is certainly correct about the lack of any value in providing Trump intelligence briefings,” said David Priess, who, as a CIA officer, briefed George H.W. Bush for many years after he had left the presidency.

He noted that the briefings are provided because former presidents have a unique role in national life. They are often seen as representing the United States, especially by foreign leaders, for the duration of their lifetime.

“Traditionally, these briefings have kept former presidents informed enough to serve as confidential advisers to the current president if needed, to offer perspective during an international crisis or before high-level negotiations with a foreign leader, for example,” Priess said.

“But there’s no chance of Biden reaching out to Trump for that,” he added. “So why would Biden run the risk of Trump’s disclosure of sensitive information by agreeing to such briefings?”

Last month, before Biden’s inauguration, the chairman of the House Intelligence Committee also said Trump should be denied access to official secrets after he left office.

“There is no circumstance in which this president should get another intelligence briefing, not now and not in the future,” Rep. Adam Schiff, D-Calif., said on CBS’s “Face the Nation.”

Schiff helped lead the first impeachment effort against Trump, starting more than a year ago, after Trump suggested to the president of Ukraine that his country should investigate Biden - at the time a potential rival for the presidency - and his family.

“Indeed, there were, I think, any number of intelligence partners around the world who probably started withholding information from us because they didn’t trust the president would safeguard that information and protect their sources and methods,” Schiff said. “And that makes us less safe.”

All presidents exit the office with valuable national secrets in their heads, including procedures for launching nuclear weapons, knowledge of the country’s intelligence-gathering capabilities, information about assets inside foreign governments and plans for new and advanced weapon systems.

But until Biden took office, no new president had voiced concern that his predecessor might expose what he knew or act recklessly with information he received after leaving the White House.

Some intelligence experts have previously said that Trump could be seen as a counterintelligence risk: He was in debt and angry at the U.S. government, particularly what he described as a “deep state” conspiracy that he said tried to stop him from winning the White House in 2016 and resisted him while he was in office. Trump also falsely claimed that he was the victim of an illegal effort that robbed him of reelection.

Former presidents generally receive briefings before they travel overseas, especially if they are doing so at the behest of the administration of the day, so that they can be apprised of recent developments and know what subjects they might want to explore, or avoid, with particular foreign leaders. They are often seen as valuable assets by the incumbent White House, given their stature and access to the top levels of foreign governments.

The briefings are usually delivered by current intelligence officers, including those who have experience briefing the sitting president. But former presidents do not receive the same classified daily briefing as a sitting commander in chief.

Biden’s comments about security briefings came just days before the Senate was scheduled to open Trump’s second impeachment trial. House impeachment managers, or prosecutors, are preparing their case that the president, among his alleged offenses, “gravely endangered the security of the United States and its institutions of government” by inciting the mob that attacked the Capitol.

Trump’s defense team is expected to deny any incitement, saying the president was exercising his right to free speech in questioning the election results, and to argue that the Constitution does not provide for the impeachment trial of a president after he has left office.

Biden, in the interview aired Friday, declined to comment on whether he would vote to convict Trump if he still were a senator.

“Look, I ran like hell to defeat him because I thought he was unfit to be president,” Biden told O’Donnell. “I’ve watched what everybody else watched, what happened when that - that crew invaded the United States Congress. But I’m not in the Senate now. I’ll let the Senate make that decision.”

The Washington Post’s Ashley Parker contributed to this report.