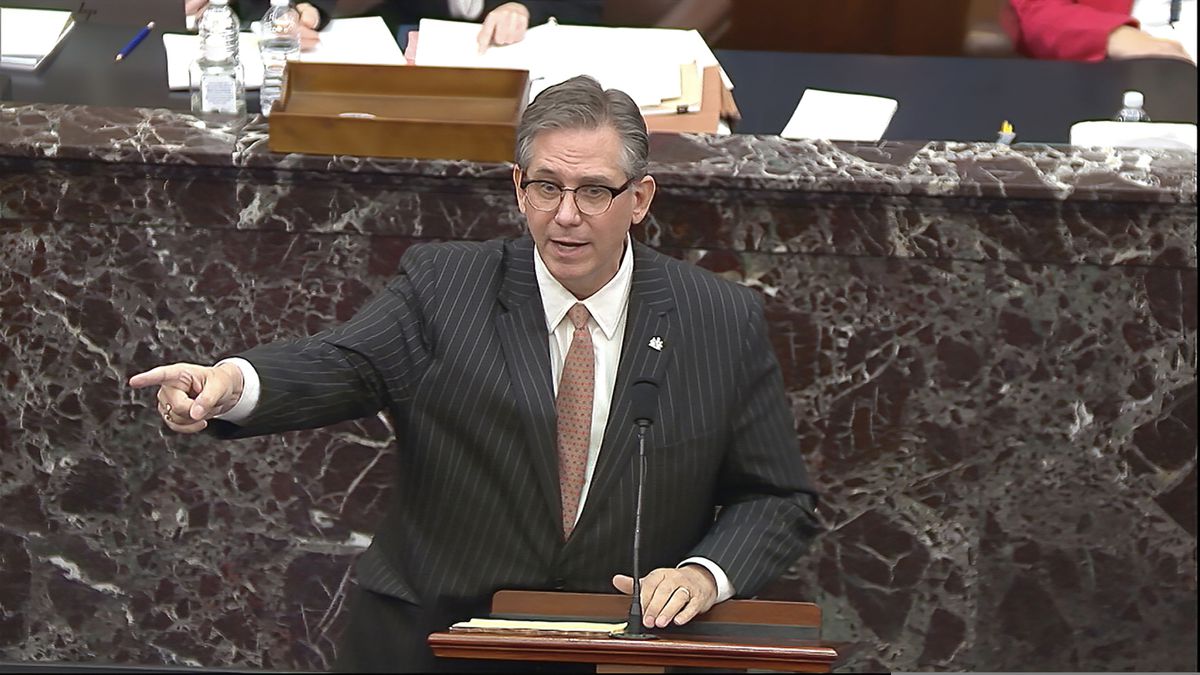 In this image from video, Bruce Castor, an attorney for former President Donald Trump speaks during the second impeachment trial of Trump in the Senate at the U.S. Capitol in Washington, Tuesday, Feb. 9, 2021. (Senate Television via AP)

In this image from video, Bruce Castor, an attorney for former President Donald Trump speaks during the second impeachment trial of Trump in the Senate at the U.S. Capitol in Washington, Tuesday, Feb. 9, 2021. (Senate Television via AP)

WASHINGTON — Former President Donald Trump fumed that his attorneys’ performance on the opening day of his second impeachment trial was a disaster, as allies and Republican senators questioned the strategy and some called for yet another shakeup to his legal team.

Trump, who was watching the proceedings in Washington from his Mar-a-Lago club in Palm Beach, Florida, was furious at what he saw, according to a person familiar with his thinking. Senators, too, balked at what they described as an unfocused and rambling performance as Trump’s team and Democratic House managers began to lay out their cases in front of the Senate jury.

While it remains unlikely that more than a handful of Republicans will join Democrats in convicting the former president at the end of the trial, the proceedings were a chance for Trump to try to repair some of the damage to his legacy incurred over the storming of the Capitol by a mob of his supporters. Trump has been charged with inciting the Jan. 6 insurrection, and last month he became the first president in history to be impeached by the House twice.

But Trump’s team — which was announced little more than a week ago — appeared unprepared as they attempted a good cop, bad cop routine that veered from flattery to legalese, and stood in dramatic contrast to Democrats’ focused emotional appeals.

[Analysis: On a day of legal wrangling, the trauma of Jan. 6 becomes the centerpiece of Trump impeachment trial]

Trump — ever the showman — was impressed with the Democrats, who opened Tuesday’s session with powerful video that compiled scenes of the deadly attack on Congress. And he complained that his team — especially lead lawyer Bruce Castor — came off badly on television and looked weak in comparison, according to the person, who spoke on condition of anonymity to discuss private conversations.

The anger was echoed by Trump allies, who blasted the lawyers both publicly and privately and with repeated profanities.

Peter Navarro, a former Trump trade adviser, had already been urging the former president to ditch his legal team and hire Republican Rep. Matt Gaetz before the trial began, warning: “You gotta get rid of those guys. These people don’t understand. This is a political trial.”

Republican members of the Senate appeared equally baffled, especially at Castor, who spent much of his time buttering up senators with compliments, praising the case made by Democrats and going on tangents.

GOP Sen. John Cornyn of Texas said Castor “just rambled on and on and on and didn’t really address the constitutional argument. He said that Trump attorney David Schoen, who spoke second, “got around to it” and “did an effective job. But I’ve seen a lot of lawyers and a lot of arguments and that was not one of the finest I’ve seen.”

Before the criticism mounted, another Trump adviser described Castor’s presentation as part of a “very clear, deliberative strategy.”

After the Democrats’ emotionally charged opening, Castor had set about “lowering the temperature” before “dropping the hammer on the unconstitutional nature of this impeachment witch hunt.”

The hammer did not appear to hit its nail.

Republican Sen. Bill Cassidy of Louisiana, who voted with Democrats on Tuesday to move forward with the trial, said that Trump’s team did a “terrible job” and was “disorganized,” “random” and “did everything they could but to talk about the question at hand.”

[Trump’s lawyers say he was ‘horrified’ by the Capitol attack. Here’s what his allies and aides said really happened that day.]

GOP Sen. Susan Collins of Maine, who also voted with Democrats, said she was “perplexed” by Castor, “who did not seem to make any arguments at all, which was an unusual approach to take.”

Texas Sen. Ted Cruz, one of Trump’s staunchest allies, said he didn’t think the lawyers had done “the most effective job,” while South Carolina Sen. Lindsey Graham, another close ally to Trump. said he didn’t know where Castor was going with his arguments.

Trump’s team did not respond to requests for comment on the day’s events or on whether they are planning any shakeups to the legal team.

Asked for a response to the GOP criticism as he was leaving the trial, Castor — who had said during the trial that the team had “changed what we were going to do” at the last minute because the House managers had done a good job -- would say only that “we had a good day.” Schoen told reporters that he hadn’t spoken yet to the president, but would “have to do better next time.”

Trump parted ways with his original impeachment team just over a week before the Senate trial was set to begin, in part because Trump wanted them to use a defense that relied on unfounded allegations of election fraud, and the lawyers were not willing to do so.