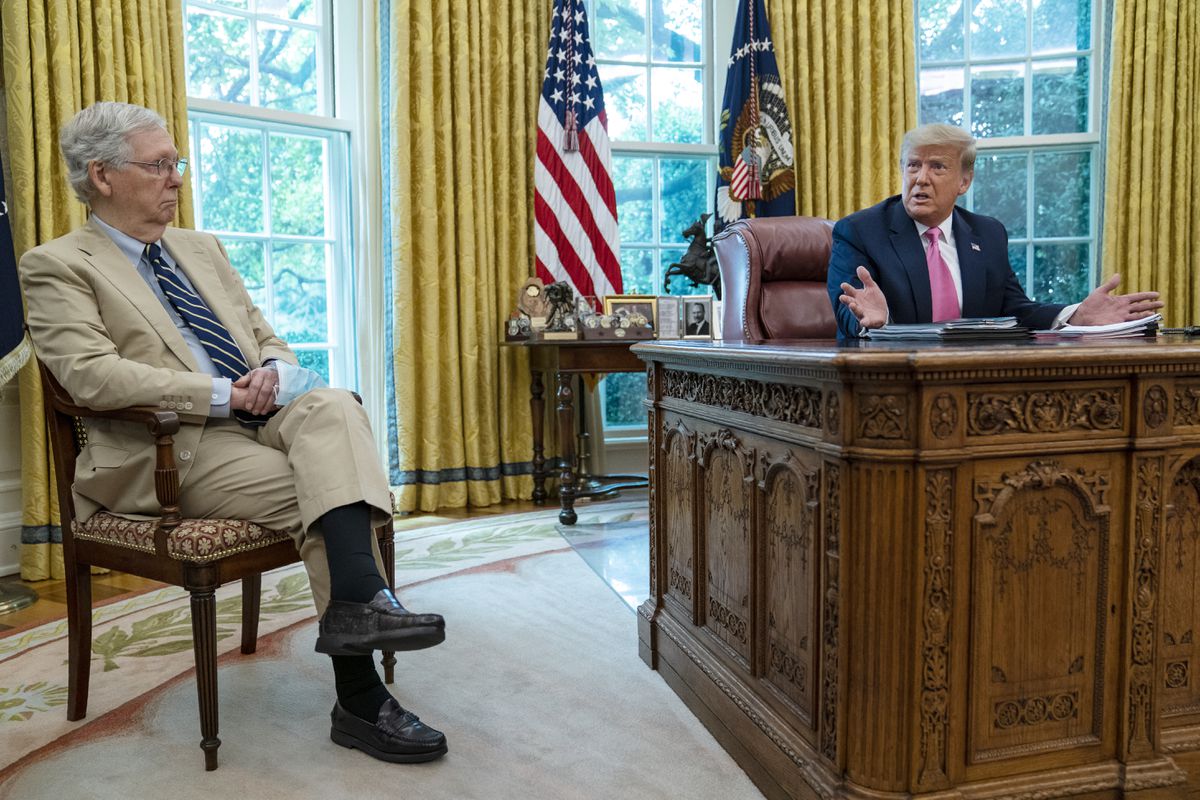 WASHINGTON - Former president Donald Trump lashed out at Senate Minority Leader Mitch McConnell on Tuesday for a “lack of political insight, wisdom, skill, and personality,” days after the Senate - with McConnell’s help - acquitted Trump on the impeachment charge that he incited the deadly Jan. 6 Capitol riot.

The lengthy and personal diatribe, issued through an affiliated super PAC, confirmed that Trump plans to be an active combatant in the battle for the direction of the Republican Party that threatens to play out in the months and years to come.

It escalated that growing rift in the party about whether it will be controlled by pro-Trump forces unwilling to question the actions and record of the former president or those viewed as more traditional Republicans focused on building the party around a political philosophy that will resonate with more voters.

Trump’s statement came after McConnell, R-Ky., voted to acquit Trump but criticized him for being “practically and morally responsible for provoking” the Capitol attack, and indicated that the party needed to turn away from Trumpism to win back its majority in the Senate. McConnell also suggested that there could be legal consequences for Trump’s conduct on the day of the riot.

Trump said he would fight McConnell’s focus on “electability” in GOP candidates head-on and would back pro-Trump Republicans in congressional primaries where “necessary and appropriate.”

“Mitch is a dour, sullen, and unsmiling political hack, and if Republican Senators are going to stay with him, they will not win again,” he said in the statement released by the Save America PAC. “He will never do what needs to be done, or what is right for our Country.”

A McConnell spokesman did not respond to a request for comment. A Trump adviser who spoke to the former president in recent days said the statement came together over several days after Saturday’s acquittal vote, with Trump feeling newly liberated to begin reentering the political arena.

The statement was circulated as both major political parties continued to react to his Saturday impeachment acquittal, in which seven Republicans joined all 50 Democrats to convict - falling short of the necessary two-thirds threshold for conviction.

Trump-loyal Republican Party officials sought to send a message to the seven GOP senators who voted to convict the former president by pursuing censure or reprimand measures that are largely symbolic but reflect the deep loyalty that front-line party activists continue to have for Trump.

Two Republican senators - Richard Burr of North Carolina and Bill Cassidy of Louisiana - have been censured by their state parties, with activists demanding similar action against a third, Patrick Toomey of Pennsylvania. Many of the 10 Republican House members who voted to impeach Trump last month have been rebuked by local party organs.

Democrats, meanwhile, moved to establish new avenues of accountability for the Capitol attack - and potentially for Trump himself - by drafting legislation behind closed doors to create an independent, nonpartisan commission modeled on the body that studied the 9/11 terrorist attacks. That commission worked for 20 months before issuing a landmark report detailing the causes of the attacks and sweeping recommendations for action to prevent further terrorist strikes.

After Speaker Nancy Pelosi’s announcement on Monday that the House would move forward with legislation establishing such a commission, the effort won the endorsement of two other powerful Democrats on Tuesday - President Joe Biden and Senate Majority Leader Chuck Schumer of New York.

But it remained unclear Tuesday to what degree the effort would win GOP support. Several Republican aides, speaking on the condition of anonymity to speak candidly about the debate, said much would depend on how Democrats designed the commission and sketched out its scope. House Minority Leader Kevin McCarthy, R-Calif., said in a statement that any such panel “must be evenly split between both parties.”

After a five-day Senate trial that put the case for Trump’s culpability for the deadly violence on public display, top Republican leaders appeared eager to turn to a different subject.

The Wall Street Journal published a McConnell opinion article that criticized Democrats as “fair-weather institutionalists” for criticizing his stance that a former president should not be impeached and tried in the Senate, while McCarthy took aim at the $1.9 trillion pandemic relief package Democrats are muscling across Capitol Hill.

But Trump had other plans. Besides the personal attacks on McConnell, his 600-word statement sought to recast the 2020 election cycle - which resulted not only in Trump losing the White House but Republicans losing the Senate majority - as a failure of the party establishment personified by McConnell.

Trump highlighted unexpected gains in the House and in state legislative races while putting the blame for the GOP’s losses in the two decisive Senate runoffs in Georgia squarely on McConnell’s shoulders for not embracing a call for larger stimulus checks.

While Democrats embraced Trump’s late call for $2,000 checks, McConnell and Republican leaders stood firm on the $600 checks that had been negotiated across party lines. The larger checks were a “big winner for Democrats,” Trump said, before accusing McConnell of not doing more to back his unfounded claims of widespread voter fraud.

“McConnell did nothing, and will never do what needs to be done in order to secure a fair and just electoral system into the future. He doesn’t have what it takes, never did, and never will.”

After the Georgia losses, McConnell aides laid the blame at Trump’s feet for running a weeks-long campaign claiming election fraud in Georgia - one that appeared to dampen turnout in GOP-heavy areas of the state while voters in the Atlanta suburbs, repelled by Trump’s rhetoric, flocked to Democrats.

“We went from talking about jobs and the economy to Qanon election conspiracies in 4 short years and - as it turns out - they were listening!” tweeted McConnell aide Josh Holmes on election night.

Moments after the Senate voted to acquit Trump on Saturday, McConnell gave a floor speech in which he blamed Trump for spreading “wild falsehoods” about a stolen election, creating a “manufactured atmosphere of looming catastrophe” that inspired the mob.

“The leader of the free world cannot spend weeks thundering that shadowy forces are stealing our country and then feign surprise when people believe him and do reckless things,” he said, before explaining his vote to acquit: Former presidents, he said, are “constitutionally not eligible for conviction.”

McConnell suggested, however, that he supported further consequences for Trump: “We have a criminal justice system in this country. We have civil litigation. And former presidents are not immune from being held accountable by either one.”

In a subsequent interview with Politico, McConnell said he intended to take on the forces of Trumpism as the 2022 congressional midterms approach, intervening in GOP primaries to help broadly appealing candidates emerge. Republican strategists are wary that far-right Trump loyalists could appear in swing states such as Arizona, Ohio and Pennsylvania. In North Carolina, one potential candidate is Trump daughter-in-law Lara Trump, a campaign novice.

“My goal is, in every way possible, to have nominees representing the Republican Party who can win in November,” McConnell told Politico. “Some of them may be people the former president likes. Some of them may not be. The only thing I care about is electability.”

One prelude for the nasty intraparty battles to come has been the reaction to the seven Republican senators who voted with Democrats to convict Trump. Hours after the Senate voted to acquit, the Republican Party of Louisiana’s executive committee voted unanimously to censure Cassidy - who said the Constitution and the country are “more important than any one person” after voting to convict.

In Pennsylvania, several county GOP committees criticized Toomey, though an effort to reprimand him at the state level appeared to be on hold Tuesday. Officials with the Republican Party of Pennsylvania did not respond to messages seeking comment Tuesday.

All seven senators are somewhat isolated from immediate political consequences. Burr and Toomey are retiring, while Cassidy, Susan Collins of Maine and Ben Sasse of Nebraska were elected in November to six-year terms. Lisa Murkowski of Alaska faces voters next year, albeit in a state with a new blanket-primary, ranked-choice voting system that spares her from having to face a direct GOP primary challenge.

But the censures send a chilling message to the GOP ranks, said Ryan Costello - a Republican former House member who represented parts of the Philadelphia suburbs from 2015 to 2019 - especially when directed at lawmakers such as Toomey who hold overwhelmingly conservative voting records.

“What it tells you is a lot of party activists are more focused and animated on what you say or don’t say about Trump than anything having to do on how you vote on policy,” he said. “That is consistent with the criticism that we have become very cultlike and personality-driven. This feeds right into that, and frankly affirms that.”

Democrats, meanwhile, indicated that they are unwilling to let Trump’s actions surrounding the Jan. 6 attack go unaccounted for. Momentum continued to build Tuesday for a independent commission to examine the riot, which Pelosi, D-Calif., has floated since the attack’s immediate aftermath. Senior Democratic aides said a draft bill establishing the body could be unveiled as soon as this week.

Schumer spokesman Justin Goodman said the Senate majority leader “100% supports an independent commission to further investigate and report on the facts, causes and response to the Trump-incited Jan. 6 insurrection at the U.S. Capitol, as well what security improvements need to be made at the Capitol.”

White House press secretary Jen Psaki said Biden “backs efforts to shed additional light on the facts, to ensure something like that never happens again,” giving the effort a presidential endorsement for the first time.

But passing it in Congress probably would require some Republican buy-in, and several GOP aides said Tuesday that it was too soon to tell whether that was possible.

A spokeswoman for Rep. Rodney Davis, R-Ill., who wrote legislation to create a commission last month, said Republicans “need to see details of the speaker’s commission bill” before endorsing it.

Davis, the ranking member of the House Administration Committee, “is certainly supportive of creating a 9/11-style commission and believes his bill removes the politics to help get the answers Americans deserve and information Congress needs to prevent this from happening again,” said the spokeswoman, Ashley Phelps.