U.S. officially rejoins Paris climate accord, vowing to make up for lost time 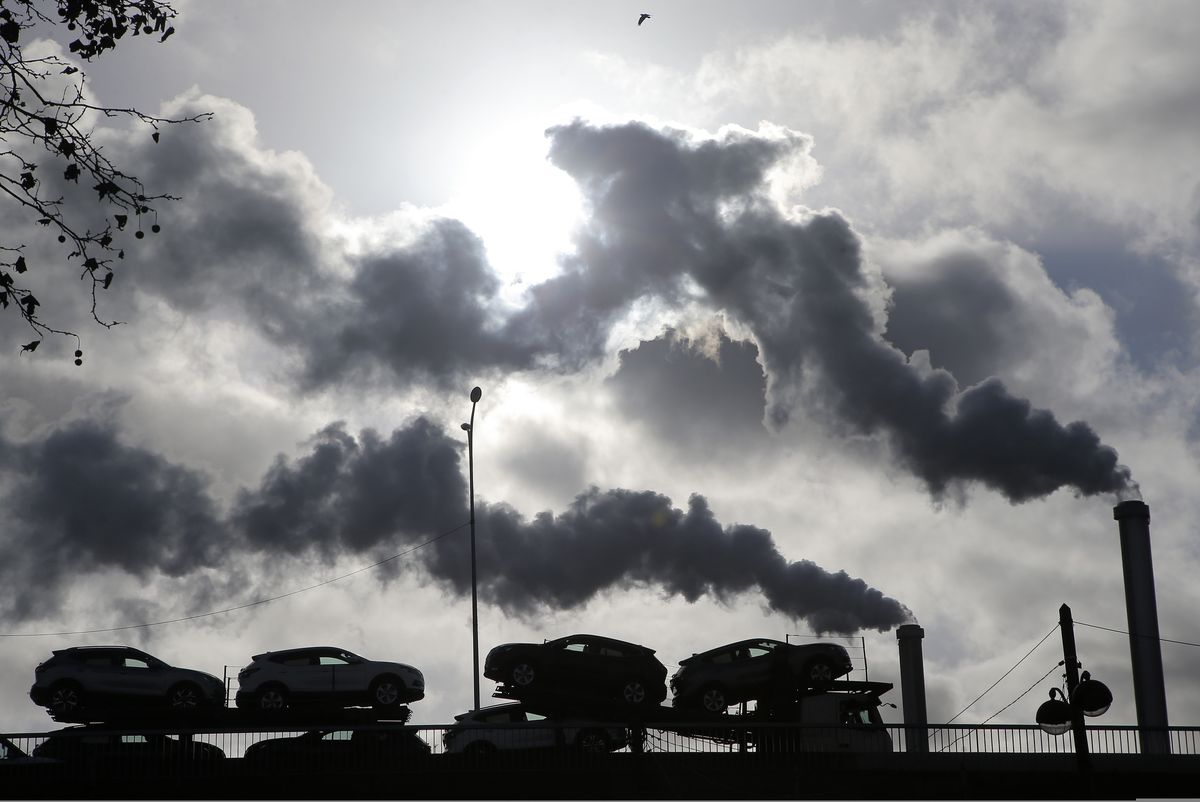 Smoke rises from a factory as a truck loaded with cars crosses a bridge in Paris, France. World leaders breathed an audible sigh of relief that the United States under President Joe Biden is rejoining the global effort to curb climate change, a cause that his predecessor had shunned. (AP Photo/Michel Euler, File)

Smoke rises from a factory as a truck loaded with cars crosses a bridge in Paris, France. World leaders breathed an audible sigh of relief that the United States under President Joe Biden is rejoining the global effort to curb climate change, a cause that his predecessor had shunned. (AP Photo/Michel Euler, File)

The United States officially has rejoined the Paris climate accord. That was the easy part.

After a four-year-stretch in which President Donald Trump repeatedly disparaged the international agreement and pulled the country from it, Friday marked the return of United States to the global effort to prevent the planet from warming past a critical climate change threshold.

Now, the Biden administration is vowing to make up for lost time and repair the country’s standing among nations after Trump made the United States the only nation to drop out of the accord.

From his first moments in office, President Joe Biden signaled he is serious about curbing U.S. greenhouse gas emissions and prodding other nations to do the same. Hours after being sworn in, he sent a letter to the United Nations kick-starting the 30-day process to rejoin the landmark 2015 accord that had been brokered under his old boss, President Barack Obama.

“We can no longer delay or do the bare minimum to address climate change,” Biden said in remarks at the virtual Munich Security Conference on Friday. “This is a global, existential crisis, and we’ll all suffer - we’ll all suffer the consequences if we fail.”

Fulfilling that campaign promise amounts to a stark repudiation of Trump, who spent years dismissing the global scientific consensus that human activity is causing the planet to warm. Although the United States technically left the Paris accord for only 107 days, Biden’s to-do list is lengthy.

The administration plans to ratchet up the country’s own commitments to reducing emissions while pressing economies such as China and India to curtail construction of coal-fired plants and urging Brazil to preserve more of the Amazon. At the same time, Biden will have to contend with a deeply divided Congress and other competing factions at home as his administration crafts a regulatory and legislative agenda for cutting emissions.

The Biden administration is reentering the agreement with plenty of pomp - but also a measure of humility. On Friday, former Secretary of State John F. Kerry, Biden’s special climate envoy, made a series of appearances in which he apologized for the nation’s absence from the global stage during the Trump years and said the country will work hard to make its actions match its promises.

“We can’t talk our way back into legitimacy,” Kerry said during one event alongside ambassadors from Italy and the United Kingdom. “We have to earn our way back.”

The White House is planning to host a summit of world leaders on April 22, Earth Day, as a prelude to a critical U.N. climate conference in Scotland in November, where nations will be expected to arrive with climate pledges that exceed the Paris accord in ambition. Existing commitments to cut emissions are, according to many estimates, woefully inadequate to forestall dangerous warming that is already evident around the world in the form of wildfires, drought, melting glaciers, loss of species, coastal flooding and other extreme weather.

Kerry on Friday acknowledged that the world is far behind where it needs to be to keep warming below a global average of 1.5 degrees Celsius above preindustrial levels. He said now is the “decisive decade” for nations to rein in their emissions and prevent mass migration, food insecurity, species collapse and other calamities that could result from climate change.

“It’s what people will do in the next 10 years that matter,” he said. “That’s what we have to talk about.”

Biden has kicked off the process of setting a new national goal for cutting emissions that is exceeds Obama’s target of slashing carbon emissions by about a quarter below 2005 levels by 2025. But analysts say the United States is at risk of missing even that goal after Trump eased regulations that would have reined in carbon pollution.

Laurence Tubiana, CEO of the European Climate Foundation and an architect of the Paris accord, said all countries need to ramp up their emissions-cutting goals ahead of the summit, but the United States especially must make a bold new promise. “The science tells us this means a target of at least 50% [greenhouse gas] cuts on 2005 levels by 2030, ideally more,” she said.

The World Resources Institute, a sustainability think tank, is pressing the Biden administration to set that 2030 goal, too. “Obviously, we lost four years of federal leadership during the Trump administration, which may make it more difficult to hit that 2025 target,” said Dan Lashof, WRI’s U.S. director.

But he added, “What we need now is to raise ambition and set a path for the next decade.”

In the wake of Trump’s decision to leave the Paris agreement, many cities, corporations, universities, nonprofit groups and some states kicked off their own efforts to reduce their carbon footprints and keep the country on track, forming a coalition called We Are Still In.

“Over the last four years, Americans across the country have continued pushing forward and cutting emissions,” billionaire and former New York mayor Mike Bloomberg said on a call Thursday with reporters. “The reason is simple: They understand fighting climate change strengthens our economy and improves people’s health.”

California, for instance, announced plans to phase out sales of new gasoline-powered cars by 2035 while New York has laws on the books aiming to produce 100% zero-emission electricity by 2040.

Bloomberg, who noted that coal plants had closed at an even faster clip under Trump than they did under Obama, was a major funder behind that push on behalf of public officials and private industry in recent years.

“It effectively held the line until this moment,” said Jeff Nesbit, executive director of Climate Nexus, a firm that highlights climate effects and clean-energy initiatives across the country.

Yet there is only so much local governments can do on their own. To match whatever new goals Biden sets, his administration has directed agencies to begin unraveling Trump’s environmental policies and is teeing up major infrastructure bill that will aim to bolster clean power and electric cars.

Biden’s efforts to pass climate legislation to help meet Paris targets may be stymied by Republicans, many of whom represent fossil fuel-producing states and oppose his decision to reenter the Paris agreement.

“At the very least, I urge President Biden to do what the Obama administration refused to do and submit the Paris agreement to the Senate,” Sen. Steve Daines, R-Mont., said last month.

Activists abroad, such as Hindou Oumarou Ibrahim, founder of the Association for Indigenous Women and Peoples of Chad, also have pushed the United States to act with urgency, noting the devastating effects in developing countries if the rest of the world doesn’t curb carbon pollution.

“We lost four years when Donald Trump decided to withdraw from the Paris agreement,” she told reporters this week.”During those four years, consequences for developing countries have been terrible. In Chad, my country, we have faced drought, floods, [destruction] of our crops, heat waves. That has caused food insecurity, conflict between communities and increasing conflict between regions just to access natural resources.”

Like others around the world, she welcomed the U.S. reentry into the global fight to combat climate change. But she said just cutting its own emissions is not enough. Rather, the United States must help poorer and more vulnerable nations by supporting the Green Climate Fund, a U.N. program that helps developing nations with adaptation and mitigation projects.

“We need the U.S. to stand with us and help who are leading these battles today,” she said.

Friday afternoon, U.N. Secretary-General António Guterres became the latest dignitary to welcome the United States back into the global effort on climate change. “Today is a day of hope,” he said in a virtual event alongside Kerry.

But he quickly noted that despite the U.S. return, 2021 remains a make-or-break year for putting the world on a more sustainable trajectory.

“Governments will take decisions that will determine the future of people and planet,” Guterres said, adding, “The Paris agreement is our pact with our descendants and the whole human family. This is the race of our lifetimes. We must go much faster, and much farther.”