Here’s what travelers need to know about vaccine passports 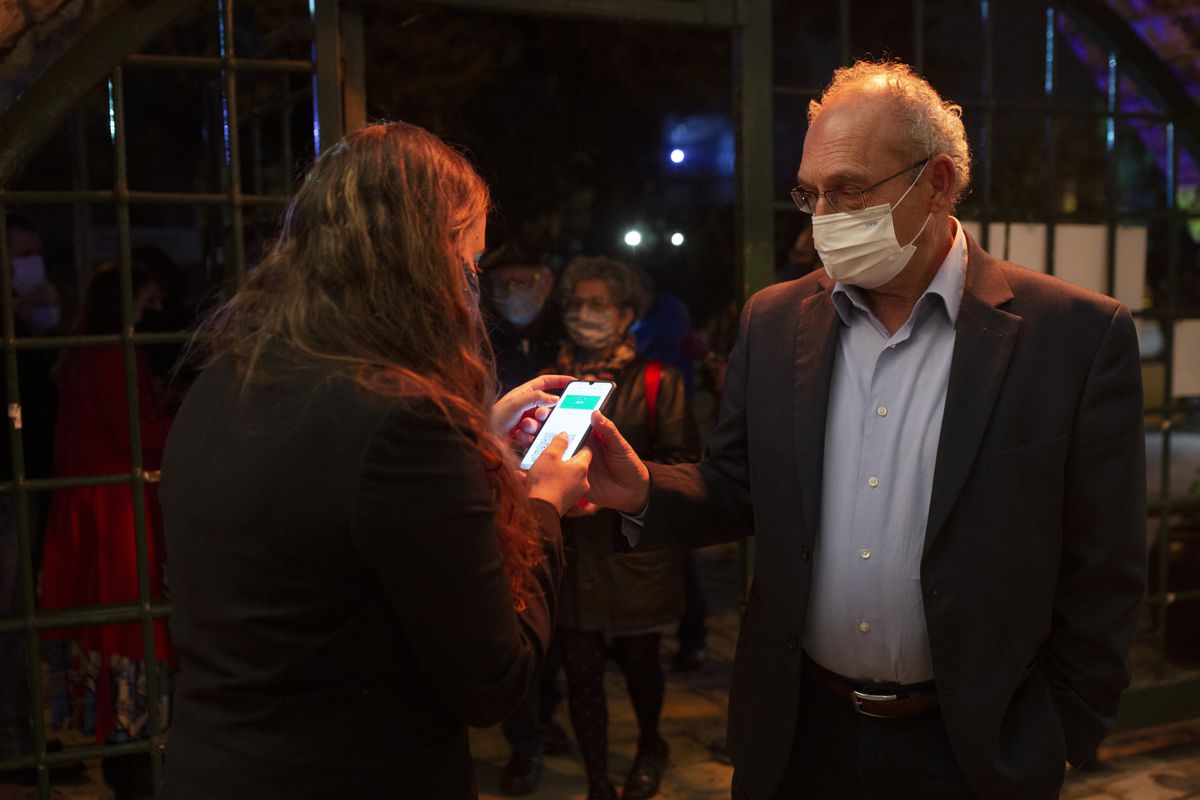 A man presents his "green passport," proof that he is vaccinated against the coronavirus, on opening night at the Khan Theater for a performance where all guests were required to show proof of vaccination or full recovery from the virus, in Jerusalem, Tuesday, Feb. 23, 2021. (AP Photo/Maya Alleruzzo)

A man presents his "green passport," proof that he is vaccinated against the coronavirus, on opening night at the Khan Theater for a performance where all guests were required to show proof of vaccination or full recovery from the virus, in Jerusalem, Tuesday, Feb. 23, 2021. (AP Photo/Maya Alleruzzo)

Since the early days of the coronavirus pandemic, health and travel officials alike have pointed to vaccinations as the route back to unrestricted travel. Now that vaccinations are picking up in the United States and the Centers for Disease Control and Prevention is issuing thousands of physical vaccination cards daily, apps that aim to verify travelers’ inoculation for travel are quickly rolling out - with some already being utilized by airlines.

But what is a vaccine passport, and how will it be utilized for a safe return to travel? Here’s what experts say the programs aim to accomplish, what their limitations are and where they are already used.

What is a vaccine passport?

Vaccine passports are primarily taking shape as free mobile apps to which international travelers upload their proof of a vaccination, coronavirus test results or health waivers. The goal is to digitize individual countries’ paper vaccination certificates into internationally recognized passes to travel. A few options for vaccine passports exist for Americans so far, and other countries and regions have also developed, or are in the process of developing, their own.

CommonPass, created by the nonprofit Commons Project, has been in use internationally for coronavirus test results since October. The program operates on both iOS and Android devices, functioning as a scannable QR code that holds a passenger’s test data or vaccine documentation, as well as their booked travel. The program, which is still in trial use through participating airlines and governments, is available for use only with a participating airline’s invitation code.

Another app in development by the International Air Transport Association, the IATA Travel Pass, is slated to be available for Apple users soon and will be rolled out to Android users slightly later, according to IATA. A Contactless Travel Pass portion of the app aims to enable passengers to create a “digital passport,” upload official test and vaccination certificates, verify that they are sufficient for their itinerary, and then share those certificates with airlines. The IATA app will also provide travelers with a registry of health requirements and testing/vaccination centers in their area.

IBM has also rolled out its own digital vaccination pass, IBM Digital Health Pass, which has a focus on returning to the workplace and other businesses as well as potential travel scenarios.

Where are vaccine passports being used?

Only some travelers can use vaccine passports right now, and mainly for their test results and health waivers on airline routes that permit them as a standard.

Since December, passengers have been using CommonPass for testing verification on select flights out of New York, Boston, London, and Hong Kong with United, JetBlue, Lufthansa, Swiss International and Virgin Atlantic. Those options are in addition to previous trial routes for United and Cathay Pacific Flights to London, New York, Hong Kong, and Singapore. Several international air carriers, including Emirates, Copa, Malaysia Airlines and Singapore Airlines, are trying out the IATA’s Health Pass.

Several countries and regions are creating their own vaccine passports. Malaysia’s Immunitee Health Passport is now accepted by Singapore for entry, and European Commission President Ursula von der Leyen announced a proposal this week for a privacy-friendly vaccine passport, called the Digital Green Pass, for use in Europe.

“When vaccination does take place, the architecture is such that people will now be able to gather, manage and share their vaccination status, as well as their testing status, in a privacy-protecting matter,” Crampton said. The implementation of the app is up to airlines and local governments requiring test results or vaccines for travel.

The challenge with any broader rollouts of vaccine passports, the IATA has said, is the global inconsistency in requirements for health passes.

“There is no standard in place in terms of what the key elements of a certificate would look like nor even the digitalization of a certificate … from one country to another, and no one is following any level of consistency whatsoever,” IATA senior vice president Nick Careen recently told The Points Guy. “The first step is to work with our two regulators. And that is ongoing work.”

Careen said he expects that work, and a World Health Organization (WHO) decision on digital certificate standards, to be completed by May.

What do vaccine passports mean for travelers?

A vaccine passport, experts note, is not an “immunity passport.” It is still unclear how long immunity lasts after recovering from the virus or after receiving a vaccine, and it is also unclear whether recipients of vaccines can carry and spread the virus without experiencing symptoms.

Shira Doron, a hospital epidemiologist at Tufts Medical Center in Boston, said most people will need to take the vaccine for herd immunity to be achieved.

“Immunity itself is not a means for travel with an assumption you can’t [spread] the virus,” Doron said. “With a vaccine passport, we still actually don’t know once you’re vaccinated, whether you can get into an asymptomatic carrier state and transmit it just as easily as someone not vaccinated. . . . We may find out that people who are vaccinated may still be able to carry the disease in their airways.”

What are the objections?

Beyond warnings that vaccinated people could transmit coronavirus, experts have also said requiring vaccine passports could create an unethical global incentive for inoculating travelers before prioritizing doses for at-risk populations in poorer countries with less access to the vaccines. The WHO has recommended against mandating vaccine passports for entry for that reason: Doctors have warned that 1 in 4 nations will not see any coronavirus vaccinations this year.