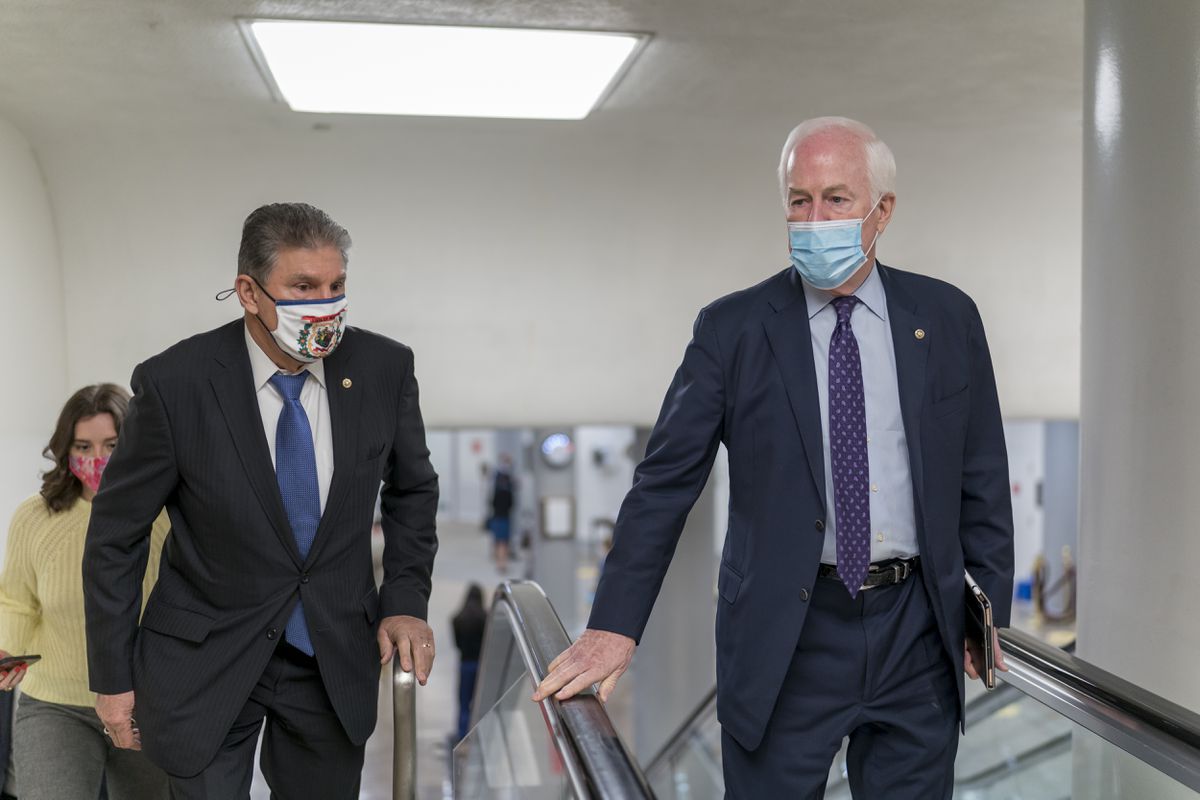 Sen. Joe Manchin, D-W.Va., left, and Sen. John Cornyn, R-Texas, head to the chamber Friday as the Senate steers toward a voting marathon on the Democrats' $1.9 trillion COVID-19 relief bill that's expected to end with the chamber's approval of the measure. (J. Scott Applewhite / AP)

Sen. Joe Manchin, D-W.Va., left, and Sen. John Cornyn, R-Texas, head to the chamber Friday as the Senate steers toward a voting marathon on the Democrats' $1.9 trillion COVID-19 relief bill that's expected to end with the chamber's approval of the measure. (J. Scott Applewhite / AP)

The agreement would extend the existing $300 weekly unemployment benefit through Sept. 6, as well as provide tax relief on benefits for households making under $150,000.

“The President has made it clear we will have enough vaccines for every American by the end of May and I am confident the economic recovery will follow. We have reached a compromise that enables the economy to rebound quickly while also protecting those receiving unemployment benefits from being hit with unexpected tax bill next year,” Manchin said in a statement. “Those making less than $150,000 and receiving unemployment will be eligible for a $10,200 tax break. Unemployment benefits will be extended through the end of August.”

The deal came after action on President Biden’s $1.9 trillion relief bill screeched to a halt Friday as an earlier 11th-hour compromise on unemployment insurance benefits appeared to unravel, leaving the entire effort in limbo and raising questions about Democrats’ ability to govern with a 50-50 Senate.

A day that began with Senate Majority Leader Charles Schumer, D-N.Y., vowing passage of Biden’s first major legislative initiative was thrown into uncertainty, leaving Republicans to practically mock the Democrats’ predicament. Attention centered on moderate Democratic Sen. Joe Manchin III, W.Va., with Republicans trying to win him over to support an unemployment insurance amendment they hoped to offer — instead of an alternative negotiated by Democratic leaders and endorsed by the White House.

The developments underscored the challenges Biden faces in getting his agenda through Congress given the exceedingly narrow Democratic majorities in both chambers. After disavowing bipartisan negotiations in order to pass a sweeping relief bill opposed by the GOP, Biden now faces a scenario where a single balky moderate Democrat can upset his plans.

As passed by the House last Saturday, the relief legislation would increase emergency federal unemployment benefits from their current level of $300 a week to $400 a week and extend them through August. The benefits are now set to expire March 14, which Democrats and the Biden administration are eyeing as the deadline for passing the wide-ranging relief bill into law.

But Manchin had voiced persistent concerns about increasing the unemployment benefits, suggesting that doing so could keep workers from rejoining the workforce just as the economy tries to get back on its feet. So Friday morning Democratic aides announced that an agreement had been reached on a compromise amendment, to be offered by Sen. Thomas Carper, D-Del., that would keep unemployment benefits at $300 a week and extend them through September, while also making the first $10,200 in benefits nontaxable to avoid tax shock hitting some Americans who’ve received the benefits.

The White House quickly praised the agreement, with press secretary Jen Psaki tweeting that it would “provide more relief to the unemployed than the current legislation.”

But it soon became unclear whether Manchin was actually on board with the deal. He was seen conversing with Sen. Rob Portman, R-Ohio, who was pushing an alternate unemployment insurance amendment that would extend unemployment benefits at their current $300-per-week level into July, without any new tax relief.

As the uncertainty continued, action was halted on the Senate floor for seven hours and counting, as senators huddled in various configurations to negotiate among themselves.

“We’re stalled out right now, because the Democrats, I think, saw the possibility they could lose an amendment, the Portman amendment on UI benefits, which does save a substantial amount of money. And it’s a better policy,” said Sen. John Thune of South Dakota, the No. 2 Senate Republican. “We think it’s a bipartisan amendment, and I think right now arms are being twisted.”

Thune and others jokingly expressed concern for Manchin, who single-handedly had the ability to throw Biden’s first major legislative effort off-track.

“I hope the Geneva Conventions applies to him,” Thune said.

Carper declined to comment, but other Democrats expressed concern that if the Portman amendment were adopted, Democrats would have to end up renegotiating the bill with the House, even as the March 14 cutoff deadline for unemployment benefits approaches.

“If it gets to a certain level it may require renegotiating with the House and the White House, and that’s not a desirable” outcome, said Sen. Ben Cardin, D-Md. “The clock is ticking.”

The unemployment benefits are just one piece of a much larger bill that also includes $1,400 relief checks to individuals, $350 billion in state and local aid, $130 billion for schools, and tens of billions more for food stamps, child tax credits, rental relief, and vaccine distribution and testing, among many other provisions.

Biden insisted anew on Friday that swift passage of the legislation is critical.

“The rescue plan is absolutely essential to turning this around, getting kids back to school safely, giving a lifeline to small businesses and getting the upper hand on COVID-19,” Biden said at an event at the White House.

The uncertainty around the unemployment insurance provisions arose as the Senate was about to plunge into a grueling process called a “vote-a-rama” that involves votes on dozens of amendments, one after another, hour after hour until senators exhaust themselves and stop. The first to be offered was by Sen. Bernie Sanders, D-Vt., on trying to restore a $15 minimum wage to the legislation.

The Senate was poised to defeat Sanders’s move, with Republicans united against it along with eight Democrats — but the vote was held open indefinitely to accommodate the drawn-out behind-the-scenes negotiations on jobless benefits.

Before the hold up on unemployment insurance, Schumer vowed to stay in session until Democrats passed the bill.

“We need to get this done. It would be so much better if we could in a bipartisan way, but we need to get it done,” Schumer said. “We’re not going to make the same mistake we made after the last economic downturn, when Congress did too little to help the nation rebound. . . . We’re not going to be timid in the face of big challenges.”

Following Schumer on the Senate floor, Minority Leader Mitch McConnell, R-Ky., lambasted Democrats for using a partisan procedure to rush through the giant legislation after Biden campaigned on promises to unify the nation — but conceded there was little Republicans could do to stop it.

“In this supposed new era of healing leadership we’re about to watch one party ram through a partisan package on the thinnest of margins,” McConnell said. “Go figure.”

Friday’s debate kicked off after Sen. Ron Johnson, R-Wis., forced Senate clerks to read the entire 628-page bill aloud, a process that took almost 11 hours and concluded around 2:05 a.m. Friday. That came after the Senate voted 51 to 50 on party lines Thursday afternoon to open debate, with Vice President Harris breaking the tie. The partisan vote to start debate was a likely sign of the final outcome, although Sen. Lisa Murkowski, R-Alaska, said she was still examining the bill after Democrats made some last-minute changes that could help her state and others.

[Sen. Murkowski is a critical player in Biden’s push for Republican support]

The last-minute wheeling-and-dealing was a sign of Democratic leaders’ determination to hold together to pass Biden’s first major legislative initiative. It would be one of the largest bills ever enacted in congressional history, and its passage would stand as an early success for the new president, who has insisted it is necessary to stabilize the economic recovery and ensure the nation gets vaccinated.

Senate Democrats are moving the legislation forward under a process called “budget reconciliation” that allows it to pass with a simple majority, instead of the 60 votes often required. The complicated rules governing reconciliation bills also prohibit certain items without a particular budgetary impact. The Senate parliamentarian ruled last month that the minimum wage increase, a top priority for many liberals, did not pass that test.

Presuming the bill passes the Senate it must go back to the House for final passage, which is expected early next week.

With Democrats controlling only 50 votes in the Senate — and holding the majority only because Harris can break ties — the power of one senator to impact proceedings was glaringly evident Friday as Manchin’s stance on unemployment insurance became critical to the outcome. The same dynamic could arise as Biden tries to move forward on other agenda items going forward.

Beyond unemployment insurance, other controversies loomed on the relief bill as Republicans readied dozens of amendments on everything from energy exploration to abortion.

“Republicans have many ideas to improve the bill, many ideas, and we’re about to vote on all kinds of amendments in the hope that some of these ideas make it into the final product,” McConnell said.

Even before the late change on unemployment benefits, Biden and Democratic leaders already had agreed to some other changes aimed at addressing concerns raised by moderate Democrats, including narrowing eligibility for stimulus payments and earmarking some of the state and local funding for capital projects.

Congress passed a series of bills last year totaling some $4 trillion to fight the pandemic, including $900 billion in December, and Republicans said that was more than enough.

The debate came as the U.S. economy saw encouraging news on Friday in a jobs report showing 379,000 jobs had been added in February. Still, the unemployment rate remained dramatically elevated above pre-coronavirus levels with more than 9 million Americans remaining jobless.