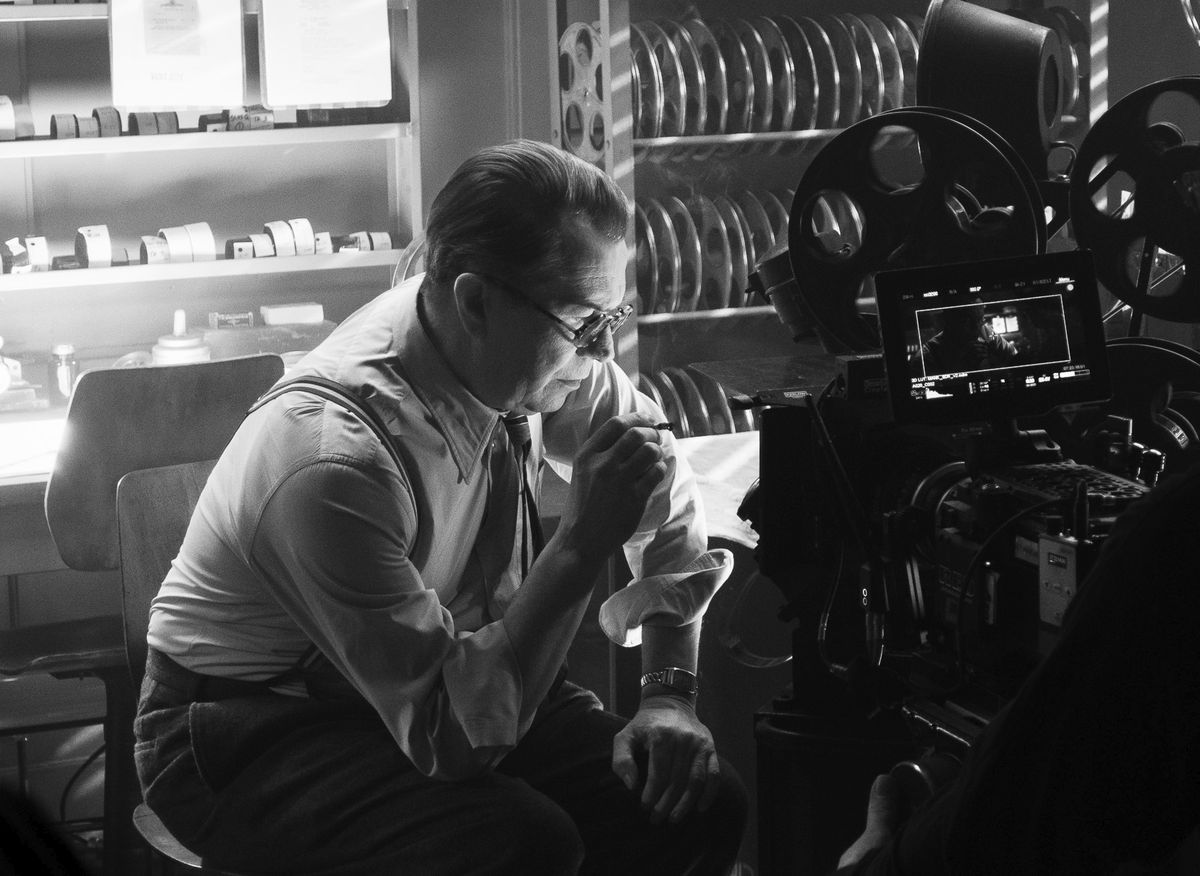 In this image released by Netflix, Gary Oldman portrays Herman Mankiewicz in a scene from "Mank." (Nikolai Loveikis/Netflix via AP)

In this image released by Netflix, Gary Oldman portrays Herman Mankiewicz in a scene from "Mank." (Nikolai Loveikis/Netflix via AP)

NEW YORK — In a year in which the pandemic shuttered movie theaters for months, Academy Awards nominations went to two female filmmakers for the first time and a historically diverse slate of actors Monday but, ultimately, David Fincher’s “Mank” — a very traditional contender about Hollywood itself — took the lead.

Fincher’s “Mank” easily topped nominations for the 93rd Academy Awards — delayed two months by the coronavirus pandemic — with 10 nominations, including best picture, best director, acting nods for Gary Oldman and Amanda Seyfried, and a host of others for its lavish craft.

The rest were spread among a wide variety of contenders. Six nominations were scored by six films, all of which are also up for best picture: “Judas and the Black Messiah,” “Nomadland,” “Minari,” “Sound of Metal,” “The Trial of the Chicago 7” and “The Father.” Also nominated for best picture was Emerald Fennell’s “Promising Young Woman.”

History was made in the best director category where only five women have ever been nominated before. This year, both Chloé Zhoe (“Nomadland”) and Fennell got nods. “Never going to stop crying,” Fennell, also nominated for best screenplay, said on Twitter.

Zhao, the first Asian woman nominated for best director, is the most nominated woman in a single year in Oscar history. She was also tipped for the film’s adapted screenplay, editing and as a producer in the best picture category. The other directing nominees were Lee Isaac Chung for “Minari,” Fincher for “Mank” and Thomas Vinterberg for “Another Round.”

For performers, it’s the most diverse group of nominees ever — and a far cry from the all-white acting nods that spawned the #OscarsSoWhite hashtag five years ago. Nine of the 20 acting nominees are people of color, including a posthumous best-actor nomination for Chadwick Boseman (“Ma Rainey’s Black Bottom”), as well as nods for Riz Ahmed (“Sound of Metal”), Steven Yeun (“Minari”), Viola Davis (“Ma Rainey’s Black Bottom”) and Andra Day (“The People vs. Billie Holiday”) and supporting nominations for Daniel Kaluuya and Lakeith Stanfield (“Judas and the Black Messiah”), Leslie Odom Jr. (“One Night in Miami”) and Yuh-Jung Youn (“Minari”).

Davis, who won for her performance in 2016′s “Fences,” landed her fourth Oscar nomination, making her the most nominated Black actress ever. Yeun is the first Asian American ever nominated for best actor. “Judas and the Black Messiah” is the first all-Black producing team — director Shaka King with producers Ryan Coogler and Charles D. King — nominated for best picture. Overall, a record 70 women were nominated for 76 Oscars, the academy said.

The other nominees for best actress are: Carey Mulligan, “Promising Young Woman”; Frances McDormand, “Nomadland”; Vanessa Kirby, “Pieces of a Woman.” The remaining nominee for best actor is Anthony Hopkins for the dementia drama “The Father.”

With moviegoing nearly snuffed out by the coronavirus, the best-picture nominees had hardly any box office to speak of. For the first time, Hollywood’s biggest and most sough-after awards belong to movies that were almost entirely seen at home.

Netflix, as expected, led the pack with 35 nominations. The service is still gunning for its first best-picture winner, and this year has two shots in “Mank” and “The Trial of the Chicago 7” — a movie Paramount Pictures sold off during the pandemic. Netflix led last year, too, with 24 nominations, but came away with just two wins.

Other streamers were in the mix. Amazon, in particular, was well represented with “Sound of Metal,” “Borat Subsequent Moviefilm” and “One Night in Miami” — leading to 12 nominations overall. Both Apple TV+ (“Wolfwalkers,” “Greyhound”) and Disney+ (“Soul”) landed their first nominations. The film that tried to lead a box-office revival — Christopher Nolan’s “Tenet” — walked away with nominations for production design and visual effects.

The nominations were announced from London by presenters Nick Jonas and Priyanka Chopra Jonas. The Academy Awards would typically have happened by now but this year will be telecast April 25.

The film academy confirmed Monday that the show will be held at both its usual home in the Dolby Theatre in Los Angeles and the city’s railway hub, Union Station.

This year’s awards season — typically a monthslong circuit of screenings, cocktail parties and schmoozing — has been entirely virtual, taking much of the buzz and predictability out of the Oscars. Eligibility was extended to early 2021 releases and to movies that bypassed theaters.

Among the films that had hoped for a better result Monday was Spike Lee’s “Da 5 Bloods” — which was nominated only for its score. Just eight out of a possible 10 movies were nominated for best picture, leaving out “Ma Rainey’s Black Bottom,” Regina King’s “One Night in Miami” and Golden Globe winner “Borat Subsequent Moviefilm.”

Despite the disappointment on “Borat,” Sacha Baron Cohen was still a nominee for his supporting role as activist Abbie Hoffman in “The Trial of the Chicago 7,” and “Borat” star Maria Bakalova was nominated for best supporting actress. Also nominated in the category: Glenn Close for “Hillbilly Elegy” and Olivia Colman for “The Father.”

The most competitive category might have been documentary, where “Collective,” “Crip Camp: A Disability Revolution,” “The Mole Agent,” My Octopus Teacher” and “Time” ultimately landed nominations. “Collective,” the Romanian documentary about investigative journalism and government corruption, became just the second film nominated for both best documentary and best international film. The other international film nominees were “Quo Vadis, Aida?,” Bosnia and Herzegovina; “Another Round,” Denmark; “Better Days,” Hong Kong; and “The Man Who Sold His Skin,” Tunisia.

The nominees for best animated feature: “Onward”; “Over the Moon”; “A Shaun the Sheep Movie: Farmageddon”; “Soul”; “Wolfwalkers.”

The film academy and ABC will hope that the nominees can drum up more excitement than they have elsewhere. Interest in little golden statuettes has nosedived during the pandemic. Ratings for a largely virtual Golden Globes plunged to 6.9 million viewers — a 64% drop from 2020 — last month. Though on Sunday the Grammys managed to break through the Zoom trap.

With the notable exception of fueling streaming subscriber growth, the pandemic has been punishing for the movie industry. Production slowed to a crawl, blockbusters were postponed or detoured to streaming and thousands have been laid off or furloughed.

But the outlook for Hollywood has recently brightened as coronavirus cases have slid and vaccines have ramped up. Movie theaters are reopening in the U.S.’s two largest markets, New York and Los Angeles. And several larger movies — including the Walt Disney Co.’s “Black Widow” (May 7) — are scheduled for May and beyond.