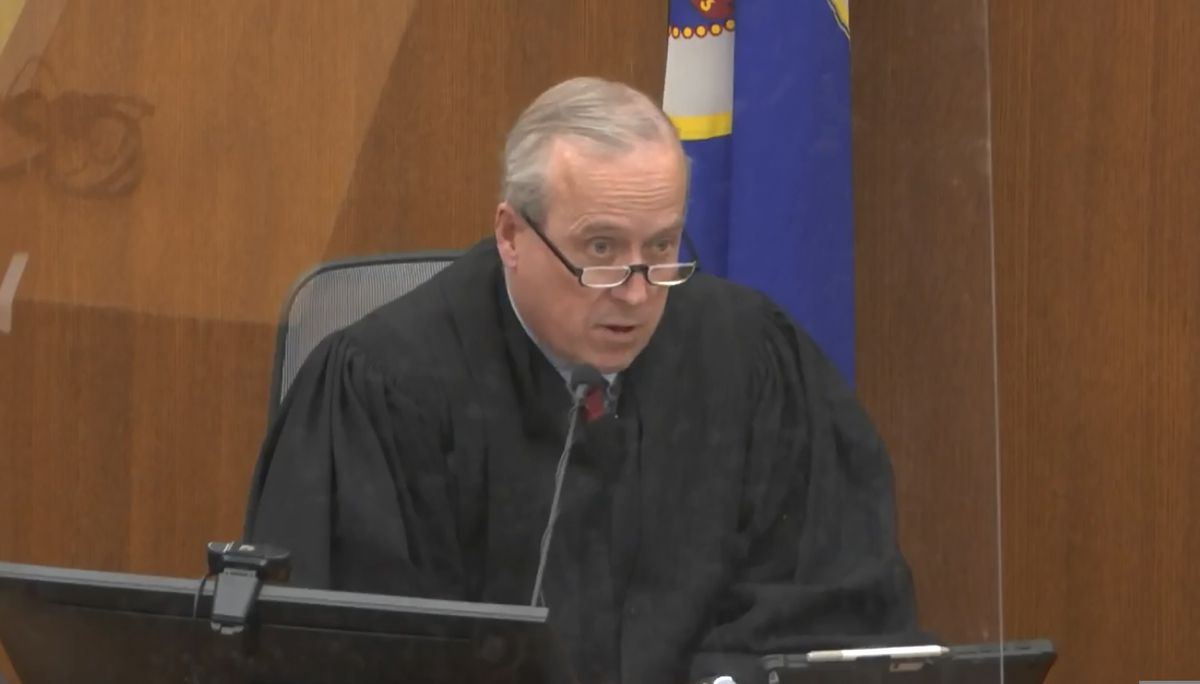 In this screen grab from video, Hennepin County Judge Peter Cahill presides over jury selection, Friday, March 19, 2021, in the trial of former Minneapolis police officer Derek Chauvin at the Hennepin County Courthouse in Minneapolis, Minn. Chauvin is charged in the May 25, 2020, death of George Floyd. (Court TV via AP, Pool)

In this screen grab from video, Hennepin County Judge Peter Cahill presides over jury selection, Friday, March 19, 2021, in the trial of former Minneapolis police officer Derek Chauvin at the Hennepin County Courthouse in Minneapolis, Minn. Chauvin is charged in the May 25, 2020, death of George Floyd. (Court TV via AP, Pool)

MINNEAPOLIS - The judge overseeing the murder trial of Derek Chauvin, a former Minneapolis police officer charged in George Floyd’s death, rejected a defense request to delay or move the proceedings because of pretrial publicity related to the city’s $27 million civil settlement with Floyd’s family.

Hennepin County District Court Judge Peter Cahill ruled on motions from Eric Nelson, Chauvin’s attorney, who asked for a continuance and a change-of-venue in the case, saying he was “gravely concerned” that news of the settlement had tainted the jury pool and compromised his client’s right to a fair trial.

But the judge, while acknowledging there was extensive “prejudicial pretrial publicity” in the case, said he did not find sufficient grounds to delay the trial or move the proceedings - pointing in part to the faster than expected pace of jury selection, which could wrap up as soon as Friday.

“As far as change of venue, I do not think that that would give the defendant any kind of a fair trial beyond what we are doing here today,” Cahill said.”I don’t think there’s any place in the state of Minnesota that has not been subjected to extreme amounts of publicity on this case.”

Cahill also ruled that he will allow Chauvin’s defense to mention limited details of a 2019 interaction between Floyd and the Minneapolis police that was similar to the 2020 incident that left the 46-year-old Black man dead. He also will limit the testimony of a prosecution witness, a forensic psychiatrist who is being called to talk about Floyd’s reaction to officers at the 2020 scene, but said he was open to reconsidering that decision during the trial.

The major decisions come as jury selection in the case nears a finish. One more juror was added Friday, bringing the number of seated jurors to 13. The court is seeking a panel of 12 jurors and at least two alternates, though Cahill had previously indicated he might seek up to four.

On Wednesday, Cahill dismissed two of the seven jurors who had been seated in the case last week before Minneapolis officials announced the city’s record $27 million payout to Floyd’s family. Both told the judge it had compromised their ability to presume Chauvin innocent. But the court replaced them with other jurors that same day.

In all, an additional eight jurors have been seated this week - including six who said they had seen news of the settlement but said it would not influence their decision-making.

Cahill agreed with prosecutors who had pointed to the steady pace of jury selection this week as proof that pretrial publicity, including about the settlement, had not harmed Chauvin’s right to a fair trial.

But Nelson has strongly implied jurors won’t be able to put the news out of their minds, even if they swear under oath that they are able to do so, because most already view Chauvin in a negative light.

In a court filing made public Friday, Nelson said two-thirds of the 326 potential jurors summoned in the case said they had a “negative” opinion of his client on a questionnaire the court distributed months before the settlement announcement. He said more than half the jury pool expressed a “neutral” view of Floyd.

Nelson has repeatedly complained about the “suspicious timing” of the $27 million settlement - including on Thursday, when he alerted the judge to comments made at a news conference with Minneapolis city officials where the city attorney said the settlement with the Floyd family was not yet final and still subject to approval by a federal judge.

Mayor Jacob Frey, a civil rights attorney, also told reporters he “disagreed with the underlying premise” that the settlement had affected Chauvin’s trial but declined to comment further, citing requests from Cahill to stop talking about the case.

In court, Nelson quickly seized on those comments, again questioning the motives of city officials and whether the settlement announcement “was necessary” given the agreement was not final and would not be for weeks.

Cahil has hinted at his displeasure about the city’s handling of the settlement and the continued comments of city officials about the case and has described the defense concerns as “legitimate.” But he said he had no control over the city’s actions and ultimately believed the proceedings had not been compromised.

Nelson had also pressed Cahill to reconsider allowing a May 6, 2019, incident between Floyd and Minneapolis police to be presented to the jury.

In that incident, Floyd was handcuffed and placed in a police car without confrontation and taken to a police station, where he told officers he had swallowed as many as eight Percocet pills - a powerful prescription narcotic.

Cahill had repeatedly declined to allow mention of the 2019 incident at trial, saying it is irrelevant to Chauvin’s case.

But Nelson this week argued the incident was relevant on medical grounds as proof of how Floyd’s body responded to drugs that he admitted he had taken. He said it is central to the defense argument that Floyd’s health issues and a high level of drugs in his system at the time of his arrest killed him, not the pressure from Chauvin’s knee.

On Friday, Cahill said he would allow limited details about the 2019 incident as it relates to Floyd’s medical condition at the scene - including a snippet of body camera video showing an officer pointing a gun at Floyd as he was pulled from the car and photographs of pills found in the vehicle.

Cahill also granted a defense motion to limit the testimony of Sarah Vinson, a physician who specializes in psychiatry, who is being called by prosecutors to talk about how humans respond to stress and traumatic scenes and what symptoms of anxiety or post-traumatic stress disorder look like.

The defense had sought to limit Vinson’s testimony, arguing her analysis of Floyd is “speculative” and not based on scientific fact, an argument that Cahill agreed with, ruling that she cannot talk about Floyd’s state of mind. Prosecutors said Vinson was being called to rebut defense claims about Floyd’s behavior at the scene, including that he was resisting arrest.

Cahill said Friday he was open to reconsidering his decision on Vinson’s testimony at trial, but warned it could open the door for the defense to tell the jury details about Floyd’s criminal history that he has so far blocked from the case.

Floyd was pronounced dead on May 25, 2020, after he was filmed handcuffed and restrained face down on a south Minneapolis street during a police investigation of a counterfeit $20 bill that had been allegedly passed at a local market.

Chauvin, the White police officer filmed with his knee on Floyd’s neck for over nine minutes, faces charges of second- and third-degree murder and second-degree manslaughter in the Black man’s death. Three other officers charged in the case - J. Alexander Kueng, Thomas K. Lane and Tou Thao - are set to be tried separately in August.