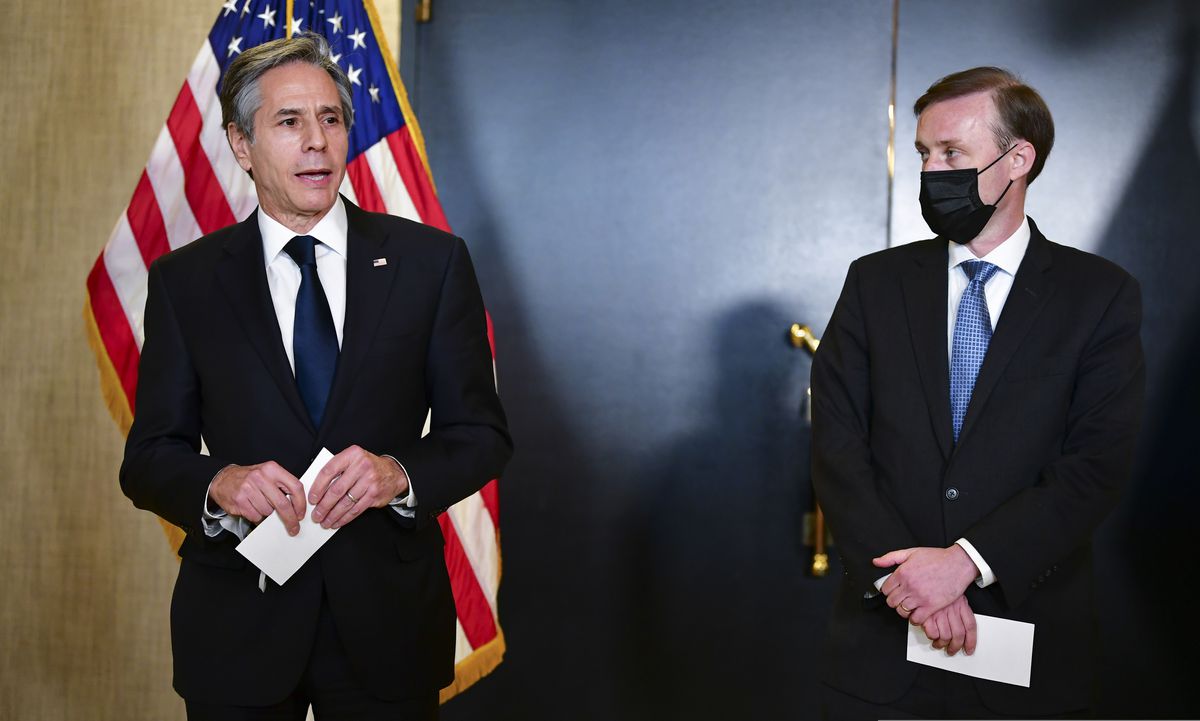 WASHINGTON - In his first standoff with China, Secretary of State Antony Blinken took a calculated risk.

Staring at his Chinese counterpart across a hotel conference room in Alaska’s largest city, he called Beijing a threat to “global stability” and denounced its record on human rights, trade, Hong Kong, Taiwan and a range of other issues in front of throngs of reporters and video cameras.

The remarks were intended to demonstrate the Biden administration’s confidence in the face of Chinese aggression and set the tone for what Blinken has called the “biggest geopolitical test of the 21st century.”

The two-day meeting, which ended Friday, followed a separate diplomatic dust-up after President Joe Biden affirmed his view that Russian President Vladimir Putin is a “killer,” generating a furious response from Moscow.

After four years of President Donald Trump’s erratic style of diplomacy, many expected Biden to return to a traditional approach. But the new administration has not shied away from impugning heads of governments and ruling parties, and ripping up the playbook on standard diplomatic choreography.

In Alaska, Biden officials anticipated that China would respond angrily to Blinken’s shot across the bow, but the retort would be limited to a two-minute statement from each Chinese official, per the ground rules Washington and Beijing agreed upon.

Instead of issuing a modest rejoinder, China’s top diplomat, Yang Jiechi, seized on Blinken’s remarks and delivered a 17-minute diatribe against U.S. imperialism and failed military interventions over the last 20 years - flipping the accusation back at the United States regarding which country is responsible for sowing instability.

“We do not believe in invading through the use of force, or to topple other regimes through various means, or to massacre the people of other countries, because all of those would only cause turmoil and instability in this world,” Yang said.

As Yang continued to skewer various aspects of U.S. governance, including its treatment of Black Americans, the carefully negotiated ground rules between the world’s two largest economies evaporated, resulting in an extended back and forth between U.S. and Chinese officials with both sides later excoriating the other for breaking diplomatic protocol.

“This rancorous public display is unquestionably unhelpful in any effort to establish a more positive dynamic,” said Danny Russel, a vice president at the Asia Society Policy Institute and a senior diplomat in the Obama administration.

“The goal of the meeting in Anchorage was to communicate and so what happened instead was they got involved in a bit of a sparring match with some diplomatic theatrics,” he added. “This is an art form with which the Chinese excel at.”

Whatever setbacks may have occurred, Blinken immediately won praise from his boss back in Washington.

“I’m very proud of the secretary of state,” Biden told reporters on the South Lawn when asked for his reaction to the first day of talks.

Biden has similarly brushed off criticisms from Moscow, which temporarily recalled its ambassador to the United States, Anatoly Antonov, in what’s believed to be the first such instance in more than 20 years. On Thursday, Putin said that by calling him a killer, the U.S. president was projecting to compensate for America’s killing of Native Americans and slavery.

The twin spats with Russia and China raise questions about whether Biden will seek to forge productive relationships with them, or whether confrontation and conflagration will be the new normal.

The Biden administration has imposed sanctions on both countries in response to Moscow’s alleged poisoning of Russian opposition leader Alexei Navalny and Beijing’s ongoing crackdown on political freedoms in Hong Kong.

In Russia, Putin’s spokesman, Dmitry Peskov, said, “It’s clear that [Biden] doesn’t want to normalize relations with our country. This is what we’ll be guided by from now on.”

In its public comments, U.S. officials have made clear the days of a U.S. president speaking flatteringly of Putin are over, and that the administration will seek to push back against Russian aggression wherever it appears. At the same time, Biden’s aides quickly negotiated the extension of the New START nuclear arms treaty with Russia at the outset of his administration, indicating that some efforts of cooperation will continue.

On China, the Biden administration has underscored the importance of both collaboration and confrontation, and appeared sensitive to the idea that Thursday’s vocal outburst would prevent substantive progress. A senior administration official said that behind closed doors, the two sides “immediately got down to business” after the public spat and engaged in “substantive, serious and direct” discussions.

“In fact, the discussion went well beyond the two hours we had allotted,” said the official, who like others quoted in this article spoke on the condition of anonymity to discuss sensitive talks.

Blinken arrived in Alaska after visiting U.S. treaty allies Japan and South Korea, where he was joined by Defense Secretary Lloyd Austin. The two men reaffirmed the U.S. commitment to its key security partners.

On Friday, as Blinken emerged from his third meeting with Chinese counterparts, he noted that China strenuously resisted U.S. criticisms of its policies in Hong Kong, Tibet, Taiwan and Xinjiang.

“It’s no surprise that when we raise those issues . . . we got a defensive response,” he said.

On issues that don’t pertain to China’s sovereignty, however, Blinken said the two sides were “able to have a very candid conversation,” including on Iran, North Korea, Afghanistan and climate change.

“We wanted to share with them the significant concerns that we have about a number of the actions that China has taken . . . and we did that,” Blinken said. “We also wanted to lay out very clearly, our own policies, priorities and worldview. And we did that, too.”