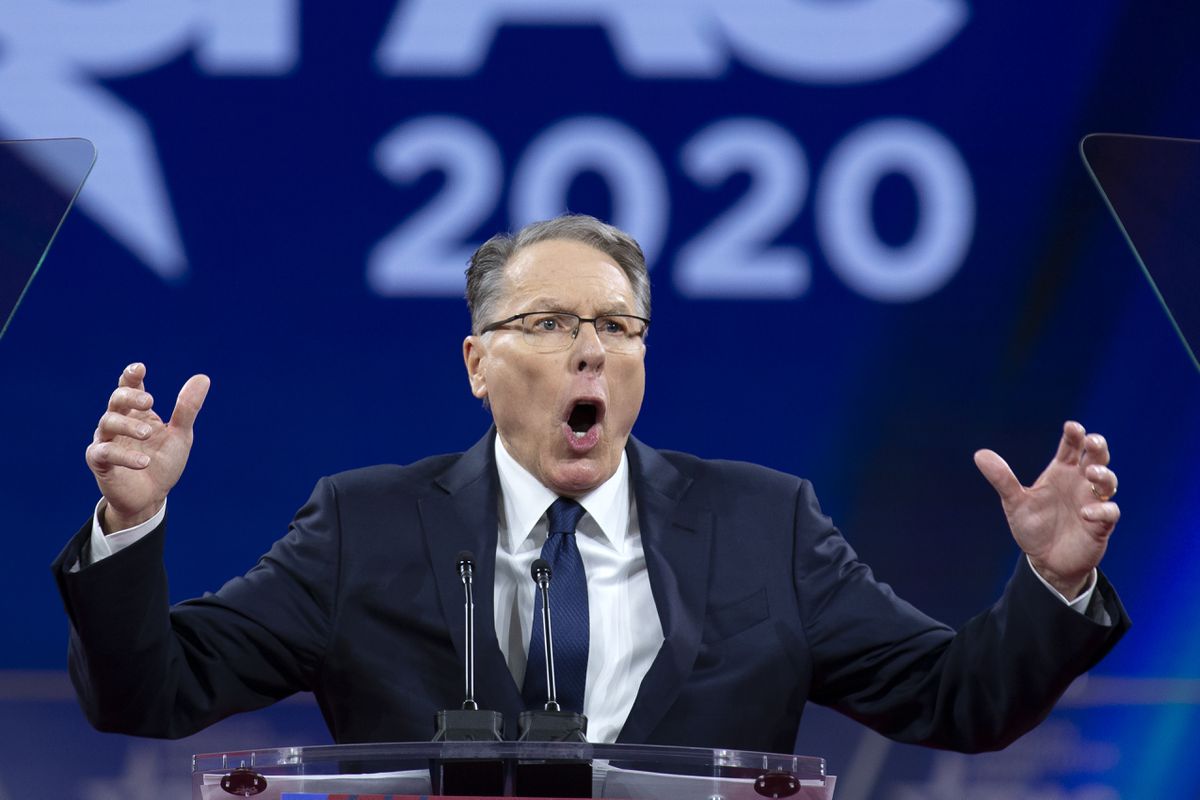 After dozens were killed at two mass school shootings in recent years, National Rifle Association leader Wayne LaPierre said the ensuing public outrage put him in so much danger that he had to take shelter - specifically, on a friend’s 108-foot yacht.

“I was basically under presidential threat without presidential security in terms of the number of threats I was getting,” LaPierre said in a deposition filed during the weekend. “And this was the one place that I hope could feel safe, where I remember getting there going, ‘Thank God I’m safe, nobody can get me here.’”

The deposition, which emerged as part of a closely watched bankruptcy hearing for the NRA in Dallas this week, noted that LaPierre had used the vessel for a “security retreat” multiple times between 2013 and 2018.

LaPierre, the longtime head of the gun-rights group, said that deadly shootings in Parkland, Fla., and Sandy Hook, Conn., had left him feeling unsafe anywhere with his family. So in the summers following both massacres, he borrowed the yacht - which comes with a cook and two Jet Skis - from a Hollywood producer.

Shannon Watts, the founder of the gun control group Moms Demand Action, first called attention to LaPierre’s testimony on Twitter on Monday. While slamming his testimony, she turned to his oft-cited defense that “a good guy with a gun” is the only way to prevent mass shootings.

“The only thing that stops a bad guy with a gun,” Watts asked, “is a good friend with a yacht?”

A representative for the NRA did not immediately respond to a request for comment from The Washington Post.

The admission about LaPierre’s stays on the yacht is one of several revelations that are likely to emerge this week as a federal court decides whether the NRA will be allowed to declare bankruptcy.

The hearing follows a sweeping lawsuit last August from New York Attorney General Letitia James (D), in which she alleged that LaPierre and other top NRA executives took advantage of the group’s nonprofit status and diverted tens of millions of dollars to pay for their luxury lifestyles.

The organization has said it has confronted its past fiscal issues, committing itself to “good governance” and replacing top officers. And the NRA’s lawyers have accused James’s suit of being politically motivated, seeking out bankruptcy protection in Texas to avoid her case in a “corrupt political and regulatory environment” in New York.

But so far, filings connected to the bankruptcy process have already included embarrassing details about the group’s spending habits — including, for instance, $65,000 in Christmas gifts from LaPierre or mosquito control treatments at his home for “security purposes.”

James’s office also investigated his attempts to purchase a $6 million, 10,000-square-foot estate at a gated golf club near Dallas in 2018. According to The Post, he had told associates he was worried about being targeted after a gunman killed 17 people at Marjory Stoneman Douglas High School in Florida.

It was the same fear that LaPierre said propelled him to seek refuge on the yacht, according to the deposition he gave last month.

Following the shootings at both Parkland and Sandy Hook, “I was under all kinds of threats. I did not feel safe anywhere with myself or my family,” he said. “This was offered as a security retreat where we could be safe and feel safe.”

Named “Illusions,” the vessel boasts “two or three or four staff people” and a cook, LaPierre acknowledged, as well as two wave runners, a 16-foot jet boat, and a “hydraulic swim platform.” On at least one of his stays, LaPierre traveled aboard the yacht to the Bahamas.

Pressed by lawyers, LaPierre said he did not offer to pay for using the yacht and did not disclose it as a potential conflict of interest. He also acknowledged that his security director did not review the boat’s security measures or conduct background checks on the Illusion’s employees.

Both James and the NRA’s former ad agency, Ackerman McQueen, have asked a federal court to reject the NRA’s Texas bankruptcy petition, accusing the group of trying to avoid the New York lawsuit, which seeks to dissolve the organization.

As the NRA fights back, its attorneys have acknowledged there could be some public embarrassment along the way.

“Are there going to be facts that are moderately cringeworthy?” NRA lawyer Greg Garman said in his opening remarks, according to the New York Daily News. “The answer is yes. We’re not going to run from them.”