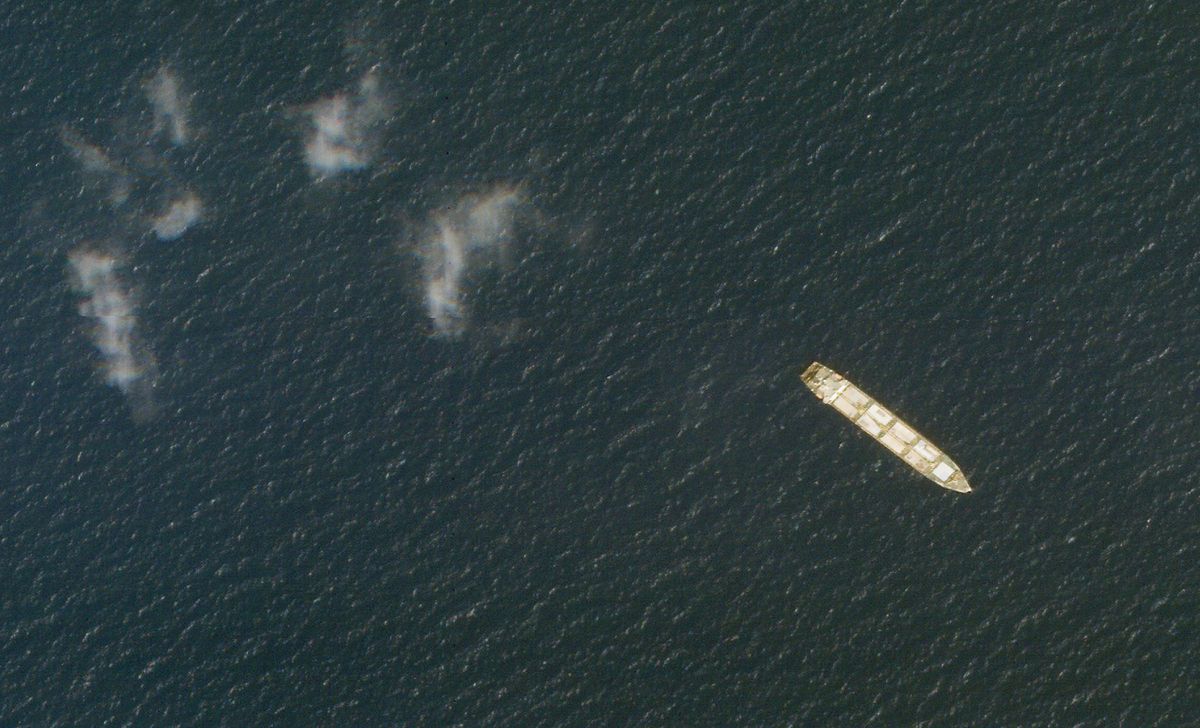 This Oct. 1, 2020, satellite photo from Planet Labs Inc. shows the Iranian cargo ship MV Saviz in the Red Sea off the coast of Yemen. The Iranian cargo ship, believed to be a base for the paramilitary Revolutionary Guard that has been anchored for years in the Red Sea off Yemen, has been attacked, Iranian state television acknowledged Wednesday, Wednesday, April 7, 2021. (Planet Labs Inc. via AP)

This Oct. 1, 2020, satellite photo from Planet Labs Inc. shows the Iranian cargo ship MV Saviz in the Red Sea off the coast of Yemen. The Iranian cargo ship, believed to be a base for the paramilitary Revolutionary Guard that has been anchored for years in the Red Sea off Yemen, has been attacked, Iranian state television acknowledged Wednesday, Wednesday, April 7, 2021. (Planet Labs Inc. via AP)

ISTANBUL - An Iranian-flagged ship was damaged Tuesday when it was struck by an explosion in the Red Sea, Iran’s Foreign Ministry and Tasnim News Agency said Wednesday.

The explosion, which the agency said was caused by limpet mines, bore the hallmarks of attacks in an escalating maritime clash between regional adversaries Israel and Iran. The incident occurred early Tuesday, at a delicate moment, as U.S., Iranian and European negotiators were preparing to hold talks in Vienna aimed at reviving a 2015 nuclear deal between Iran and six world powers.

An Iranian Foreign Ministry spokesman, Saeed Khatibzadeh, did not say who was responsible for the explosion that damaged the ship, the Saviz, which he said was struck off the coast of Djibouti. He said the vessel acted as a logistical station for anti-piracy operations in the Red Sea and that investigations are underway to determine the cause of the blast.

A report in 2018 by al-Arabiya, a Saudi-owned media outlet, called the Saviz a military ship, citing weapons and advanced surveillance equipment on the deck, and said it had been stationed off the coast of Yemen since the beginning of a Saudi-led military intervention into Yemen’s civil war. Iran has supported a Yemeni rebel group that has fought the Saudi-led coalition.

A series of attacks on ships since 2019 have raised growing concern about maritime passage in the Red Sea, Mediterranean and Persian Gulf. That year, U.S. officials accused Iran of carrying out attacks on oil tankers, at a time when the Trump administration was ratcheting up its “maximum pressure” campaign against Iran. Tehran denied that it was behind the attacks.

The Wall Street Journal reported last monththat Israel had struck at least a dozen vessels headed for Syria since late 2019, including Iranian ships or those carrying Iranian oil. The report, citing unnamed U.S. and regional officials, described an attack in February that bore similarities to the explosion that hobbled the Saviz on Tuesday. It said Israeli operatives attached a limpet mine to an Iranian vessel anchored near Lebanon.

In March, Israel blamed Iran and vowed to retaliate for a mysterious attack on an Israeli-owned freighter loaded with vehicles in the Gulf of Oman. Israel has not commented on the targeting of the Saviz. Iran said the blast caused only minor damage and no casualties.

The maritime attacks have added a volatile element to tense international negotiations involving the United States and Iran aimed at reviving the 2015 nuclear deal. President Donald Trump withdrew from the deal in 2018, and Iran, which said it remained committed to the agreement, began increasing its uranium enrichment beyond permitted levels.

On Tuesday, Iran and the United States began indirect talks in Vienna aimed at finding a road map toward lifting sanctions imposed by Trump and recommitting Tehran to its agreements under the accord. Both sides called the initial discussions “constructive.”

Israeli Prime Minister Benjamin Netanyahu, one of the deal’s most committed opponents, said Tuesday during a meeting with his Likud party that “we must not return to the nuclear plan because a nuclear Iran is a threat to the state of Israel and to the security of the entire world.”

He added: “At the same time, we need to continue to curb its aggression in our region.”

The Washington Post’s Shira Rubin in Tel Aviv contributed to this report.