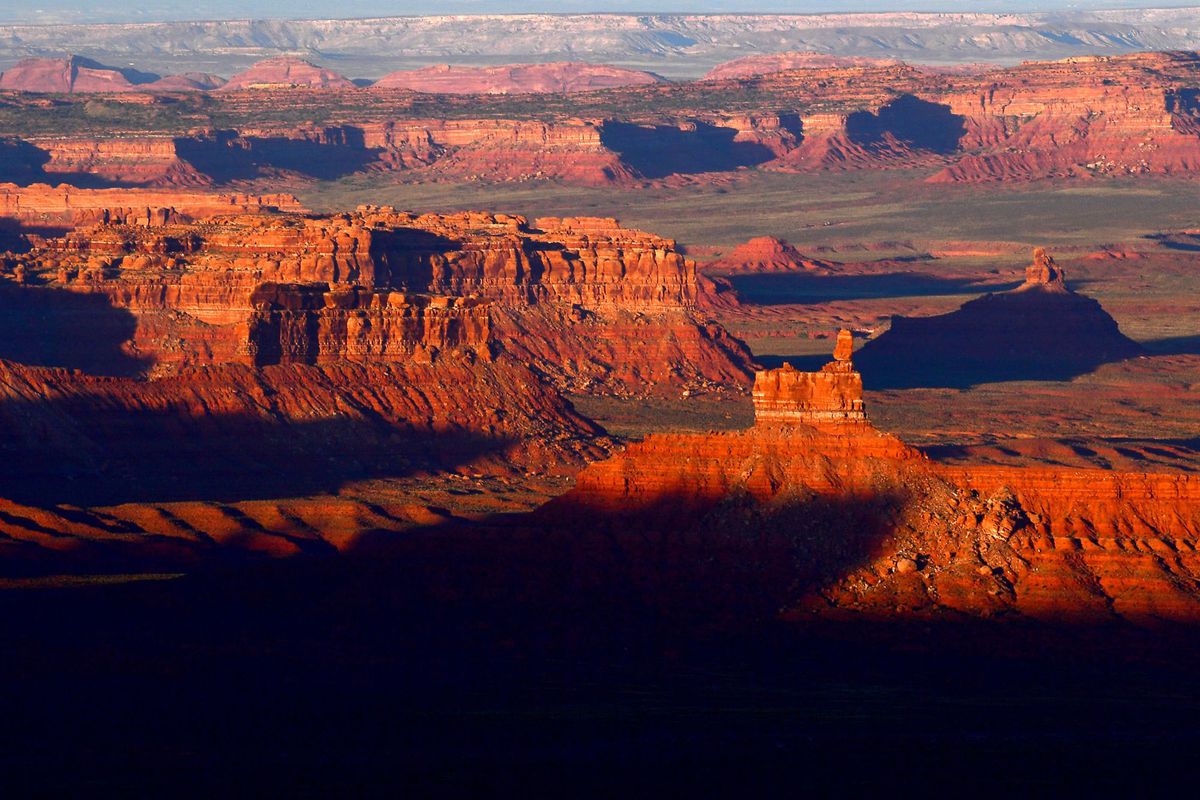 BLUFF, Utah - In the sandstone canyon where Vaughn Hadenfeldt once saw the bloody tracks of a mountain lion hauling off a mule deer, there are 1,000-year-old cliff dwellings decorated by rock paintings of bighorn sheep where one can still see the ancient footprint of an infant pressed into the wall.

A renowned wilderness guide with decades of experience exploring the Bears Ears area, Hadenfeldt has long argued that this austere landscape teeming with archaeological and cultural treasure in southeastern Utah should be viewed as an outdoor museum. And each time he visits, more of that treasure has been looted.

“Come on, people,” he muttered in disgust, as he scanned the sandy soil this week for pieces of painted pottery from the Ancestral Puebloan Indians that used to be so easy to find in this area.

“This whole site was covered with beautiful pot shards,” he said. “I guess we’re just never going to stop people from pocketing this stuff.”

In the three years since President Donald Trump slashed the size of the Bears Ears National Monument by 85%, undoing protections established by President Barack Obama, the pressures on this area have only intensified, according to the residents and scientists who study it. The threats come in many forms - from roaring ATVs to uranium mining to coronavirus-weary tourists seeking outdoor adventure - on land that is considered sacred ground by several Native American tribes.

On her first trip as the new interior secretary, Deb Haaland arrived in this small town perched under bluffs and spires Wednesday for three days of meetings and hikes in the area. The first Native American Cabinet secretary in U.S. history is reviewing what to do with the Bears Ears National Monument and the nearby Grand Staircase-Escalante National Monument that Trump also reduced in size. After her visit, Haaland is widely expected to recommend that President Joe Biden restore the Bears Ears boundaries to at least the 1.35 million acres established by Obama near the end of his term in 2016.

Biden’s allies see Bears Ears as an early opportunity to prioritize conservation over fossil fuel extraction on public lands while responding to an issue of particular importance for Native Americans, who want to see the monument not only restored but expanded beyond the Obama boundaries.

Without protection, the remains of thousands of Native American settlements and cultural sites are in “grave jeopardy,” said Pat Gonzales-Rodgers, executive director of the Bears Ears Inter-Tribal Coalition, which is composed of five tribes with deep ties to the region.

“At the end of the day, these are the sanctuaries and the cathedrals of worship and cultural practice for these tribes,” he said.

But Bears Ears remains a divisive issue in Utah. Republican politicians do not want Biden to use an executive order to restore the monument. Instead, lawmakers say they can build a more durable solution through federal legislation that would allow for negotiations among ranchers, miners, Native Americans and conservationists to balance competing interests.

“If President Biden rolls this out, the likelihood that it will be rescinded by a future president or taken up by the Supreme Court is just extremely high,” said Rep. John Curtis, R-Utah, whose district includes Bears Ears. “And that’s a terrible way to resolve these issues. Nobody wins.”

Curtis, who planned to meet with Haaland during her visit, has asked her to delay the monument decision “just long enough to see if we can reach this consensus.”

Because Bears Ears was challenged by Trump so soon after it was created, much of the infrastructure that can be found at other protected areas - signs, buildings, management staff - does not exist here. But the crowds came anyway - fueled by social media and the national spotlight on the area.

“Visitation has just really skyrocketed,” said Josh Ewing, executive director of Friends of Cedar Mesa, a nonprofit that seeks to protect the area. “You’ve got all this visitation happening without resources.”

More than 420,000 people are estimated to have visited Bears Ears last year, despite the pandemic, and Ewing expects well over half a million visitors this year. Volunteers have seen visitors leave trash, loot fossils and remnants of Native American settlements, and scribble graffiti over ancient rock art. Car campers and RVs can be spotted parked on the rims of canyons and driving through the area, following GPS coordinates posted on the Internet that identify archaeological sites.

One recent tourist rush targeted the spot where an intriguing 10-foot public art “monolith” was found in a canyon last year, at a site that was within the monument boundaries established by Obama and excluded by Trump.

“It was completely overrun,” Peterson said. “It’s a textbook example of how completely out of control things can get.”

The Bureau of Land Management, which oversees what remains of the Bears Ears National Monument and other public land, has just two law enforcement officers in its Monticello field office who are responsible for nearly 2 million acres, according to Friends of Cedar Mesa.

Faced with the shortage of government resources, Friends of Cedar Mesa volunteers opened a Bears Ears visitor center in 2018 to try to orient tourists. The group even resorted to installing portable toilets in one area particularly popular with hikers.

“We’re paying for those to be pumped and maintained out of nonprofit dollars just to address the human waste issues that are in that area,” Ewing said.

Native American tribes and environmentalists sued Trump over his decision to shrink the monument, arguing that national monuments are permanent and Trump didn’t have the authority to revoke Obama’s decision. That case is now on hold pending the Biden administration’s review.

The five tribes that came together in a historic coalition to fight for the monument more than a decade ago - the Navajo Nation, Ute Mountain Ute Tribe, Hopi Tribe, Ute Indian Tribe and Pueblo of Zuni - are calling on the Biden administration to create a 1.9-million-acre monument, as they had originally requested of Obama, said Matt Campbell, a lawyer representing three of the tribes in the lawsuit against Trump.

“If we saw something that was identical to President Obama’s plan, the tribes would be grateful, but there would be some disappointment,” he said.

Less than a year after Trump sliced 1.1 million acres out of the Bears Ears monument, Kyle Kimmerle, a residential contractor from Moab, filed a claim with the Bureau of Land Management to dig for minerals on land that had been within the protected zone established by Obama.

Uranium mining is both part of his family history - traced back to his great-grandfather - and a hobby for Kimmerle. He called his mine Easy Peasy.

“Some people go fishing on Saturday, I go tinker around on my mining claims,” he said.

Trump had been lobbied by a Canadian mining firm before reducing the size of Bears Ears, and an ongoing concern among critics has been that mining or oil and gas companies would rush into the area once protections were removed.

Not much of that has happened so far. There have been six mining claims filed since 2018, according to the Bureau of Land Management. Environmentalists who track the area say that the Easy Peasy mine is the only one that has been actively excavated.

Kimmerle dug up 30 tons of ore, sampled it for vanadium andidentified uranium - a feasibility study, he called it. At the moment, with uranium prices about half what they’d need to be for him to break even, he said, mining here is not feasible.

“Nothing is going right now; the price is just too low,” he said.

Environmentalists point out that prices could always change and that without protections, the land remains at risk.

The paleontologist who studies fossils of crocodile ancestors around Bears Ears watched as federal research dollars dried up after Trump shrank the monument.

He had planned to be in Bears Ears this week, digging up what he called a “really amazing site” full of fossils of phytosaurs - a predatory crocodile mimic with a blowhole above its eyes - that all appeared to die off simultaneously in one mass event.

After discovering the site in 2016, Gay had received a $25,000 grant from the National Conservation Lands Scientific Studies Support Program, money Congress sets aside for scientific work on national conservation lands, including national monuments. He had started excavating, but once his site fell outside of the national monument boundaries, he said, he could no longer access the funding.

It is “probably one of the most interesting fossil sites from this time period in Utah,” said Gay, who is land programs director at the Colorado Canyons Association. “Because there’s no money, it’s going to not be excavated again this year.”

In his fieldwork, Gay has found ATV and motorcycle tracks crossing the fossil sites he is working on.

Not great for the outdoor museum that is Bears Ears.

“I liken it now to opening the museum and taking away all the docents and security guards. Or just not hiring them there in the first place,” he said. “It’s sort of like a free-for-all.”