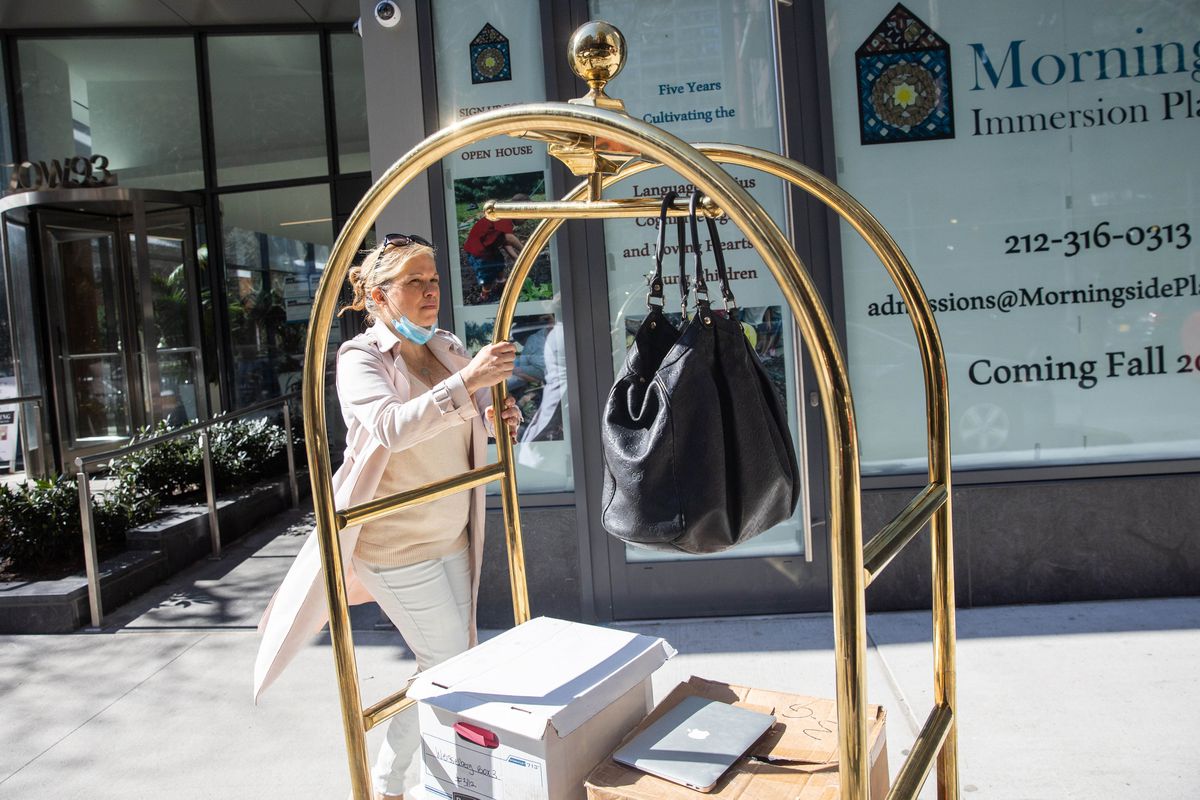 Jennifer Weisselberg carries boxes of documents and a laptop to prosecutors outside her apartment in Manhattan on Thursday. (Photo by Jeenah Moon for The Washington Post)

Jennifer Weisselberg carries boxes of documents and a laptop to prosecutors outside her apartment in Manhattan on Thursday. (Photo by Jeenah Moon for The Washington Post)

Jennifer Weisselberg was married to Barry Weisselberg - the son of Trump Organization Chief Financial Officer Allen Weisselberg - from 2004 to 2018. She has said that she had seven boxes of financial records from both her ex-husband and his father, some of which were obtained through divorce litigation. On Thursday, she loaded three boxes and a laptop computer onto a valet cart and wheeled them from her building to a black Jeep with dark-tinted windows that was waiting outside.

The move by District Attorney Cyrus Vance Jr. appears to be the latest sign that Allen Weisselberg, the company’s highest-ranking corporate officer who is not a member of the Trump family, is a key focus of the ongoing criminal probe into former president Donald Trump’s financial dealings.

The subpoena, a copy of which was obtained by The Washington Post, ordered Jennifer Weisselberg to produce all of the records she possesses for her ex-husband’s bank accounts and credit cards plus his statements of net worth and tax filings. Barry Weisselberg is a Trump Organization employee and manages an ice rink for the company in Manhattan’s Central Park. The subpoena asks specifically for records related to the Trump Organization and Wollman Rink.

“My knowledge of the documents and my voice connect the flow of money from various banks and from personal finances that bleed directly into the Trump Organization,” she said in an interview Thursday. Investigators, she added, now have her ex-husband’s 2019 and 2020 statements of net worth, his tax returns and copies of Wollman Rink checks from private events that she claims were deposited incorrectly.

She has said previously that the documents that were in her possession showed transactions in bank accounts controlled by Barry and Allen Weisselberg jointly.

Vance, a Democrat, and New York Attorney General Letitia James, a Democrat - running parallel investigations - have inquired about whether Allen Weisselberg or his son received untaxed benefits from the Trump Organization. Jennifer Weisselberg has previously said, for example, that her family received free use of Trump Organization apartments in Manhattan. Tax experts say that, in some instances, free housing must be counted as “income” for tax purposes. Jennifer Weisselberg has said it was not in this case.

“Jennifer is committed to cooperating with prosecutors and turning over any documents in her possession that might be helpful,” said Duncan Levin, an attorney for Jennifer Weisselberg. A former prosecutor in the district attorney’s office, Levin has also represented Harvey Weinstein and Seagram’s heiress Clare Bronfman. “At this point,” he added, “she’s given them everything they’ve asked for. But we’re continuing to review documents, and may have supplemental documents to give” later.

A spokesman for the district attorney’s office declined to comment, as did an attorney for Allen Weisselberg. An attorney for Barry Weisselberg did not immediately respond to a request for comment.

Investigators are examining whether the values of certain properties in the Trump Organization’s portfolio were manipulated to gain tax advantages or favorable loans and insurance rates under false pretenses.

In complex investigations such as those into Trump’s business activities, prosecutors routinely seek evidence of wrongdoing by subordinates as a means to elicit their cooperation and expose damaging information about their bosses. The pressure facing Allen Weisselberg appears intended to pursue that strategy against Trump, although neither Vance nor James has alleged wrongdoing by Trump, Weisselberg or anyone else.

A person with knowledge of the district attorney’s investigation previously told The Post that, indeed, Vance is working to “flip” him.

Trump has denied any wrongdoing and dismissed both investigations as politically motivated.

Vance’s inquiry is one of three known criminal probes focused on the former president. Another was opened in Atlanta, where the Fulton County district attorney is investigating Trump’s controversial conversations with Georgia state officials amid his unsuccessful bid to subvert the election results there. The District of Columbia Attorney General’s Office is scrutinizing Trump’s actions on Jan. 6, when a mob of his supporters assaulted the U.S. Capitol in a deadly bid to prevent Congress from tallying the electoral college results.

Fahrenthold and O’Connell reported from Washington.