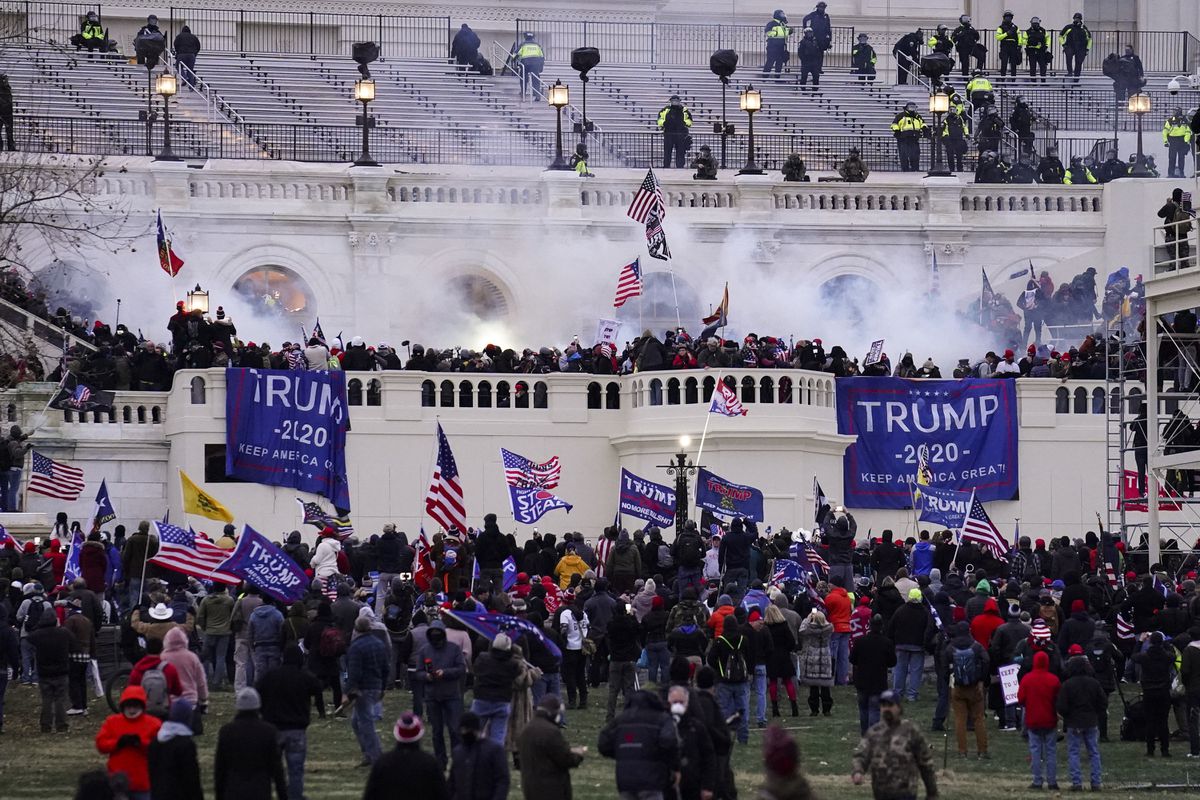 FILE - In this Wednesday, Jan. 6, 2021, file photo, violent rioters storm the Capitol, in Washington. New details from the deadly riot of Jan. 6 are contained in a previously undisclosed document prepared by the Pentagon for internal use that was obtained by the Associated Press and vetted by current and former government officials. (AP Photo/John Minchillo, File)

FILE - In this Wednesday, Jan. 6, 2021, file photo, violent rioters storm the Capitol, in Washington. New details from the deadly riot of Jan. 6 are contained in a previously undisclosed document prepared by the Pentagon for internal use that was obtained by the Associated Press and vetted by current and former government officials. (AP Photo/John Minchillo, File)

WASHINGTON — From a secure room in the Capitol on Jan. 6, as rioters pummeled police and vandalized the building, Vice President Mike Pence tried to assert control. In an urgent phone call to the acting defense secretary, he issued a startling demand.

“We need help,” Schumer, D-N.Y., said in desperation, more than an hour after the Senate chamber had been breached.

At the Pentagon, officials were discussing media reports that the mayhem was not confined to Washington and that other state capitals were facing similar violence in what had the makings of a national insurrection.

“We must establish order,” said Gen. Mark Milley, chairman of the Joint Chiefs of Staff, in a call with Pentagon leaders.

But order would not be restored for hours.

These new details about the deadly riot are contained in a previously undisclosed document prepared by the Pentagon for internal use that was obtained by The Associated Press and vetted by current and former government officials.

The timeline adds another layer of understanding about the state of fear and panic while the insurrection played out, and lays bare the inaction by then-President Donald Trump and how that void contributed to a slowed response by the military and law enforcement. It shows that the intelligence missteps, tactical errors and bureaucratic delays were eclipsed by the government’s failure to comprehend the scale and intensity of a violent uprising by Americans.

With Trump not engaged, it fell to Pentagon officials, a handful of senior White House aides, the leaders of Congress and the vice president holed up in a secure bunker to manage the chaos.

While the timeline helps to crystalize the frantic character of the crisis, the document, along with hours of sworn testimony, provides only an incomplete picture about how the insurrection could have advanced with such swift and lethal force, interrupting the congressional certification of Joe Biden as president and delaying the peaceful transfer of power, the hallmark of American democracy.

Lawmakers, protected to this day by National Guard troops, will hear from the inspector general of the Capitol Police this coming week.

“Any minute that we lost, I need to know why,” Sen. Amy Klobuchar, D-Minn., chair of the Senate Rules and Administration Committee, which is investigating the siege, said last month.

The timeline fills in some of those gaps.

At 4:08 p.m. on Jan. 6, as the rioters roamed the Capitol and after they had menacingly called out for Pelosi, D-Calif., and yelled for Pence to be hanged, the vice president was in a secure location, phoning Christopher Miller, the acting defense secretary, and demanding answers.

There had been a highly public rift between Trump and Pence, with Trump furious that his vice president refused to halt the Electoral College certification. Interfering with that process was an act that Pence considered unconstitutional. The Constitution makes clear that the vice president’s role in this joint session of Congress is largely ceremonial.

Pence’s call to Miller lasted only a minute. Pence said the Capitol was not secure and he asked military leaders for a deadline for securing the building, according to the document.

By this point it had already been two hours since the mob overwhelmed Capitol Police unprepared for an insurrection. Rioters broke into the building, seized the Senate and paraded to the House. In their path, they left destruction and debris. Dozens of officers were wounded, some gravely.

Just three days earlier, government leaders had talked about the use of the National Guard. On the afternoon of Jan. 3, as lawmakers were sworn in for the new session of Congress, Miller and Milley gathered with Cabinet members to discuss the upcoming election certification. They also met with Trump.

In that meeting at the White House, Trump approved the activation of the D.C. National Guard and also told the acting defense secretary to take whatever action needed as events unfolded, according to the information obtained by the AP.

The next day, Jan. 4, the defense officials spoke by phone with Cabinet members, including the acting attorney general, and finalized details of the Guard deployment.

The Guard’s role was limited to traffic intersections and checkpoints around the city, based in part on strict restrictions mandated by district officials. Miller also authorized Army Secretary Ryan McCarthy to deploy, if needed, the D.C. Guard’s emergency reaction force stationed at Joint Base Andrews.

The Trump administration and the Pentagon were wary of a heavy military presence, in part because of criticism officials faced for the seemingly heavy-handed National Guard and law enforcement efforts to counter civil unrest in the aftermath of the police killing of George Floyd in Minneapolis.

In particular, the D.C. Guard’s use of helicopters to hover over crowds in downtown Washington during those demonstrations drew widespread criticism. That unauthorized move prompted the Pentagon to more closely control the D.C. Guard.

“There was a lot of things that happened in the spring that the department was criticized for,” Robert Salesses, who is serving as the assistant defense secretary for homeland defense and global security, said at a congressional hearing last month.

On the eve of Trump’s rally Jan. 6 near the White House, the first 255 National Guard troops arrived in the district, and Mayor Muriel Bowser confirmed in a letter to the administration that no other military support was needed.

By the morning of Jan. 6, crowds started gathering at the Ellipse before Trump’s speech. According to the Pentagon’s plans, the acting defense secretary would only be notified if the crowd swelled beyond 20,000.

Before long it was clear that the crowd was far more in control of events than the troops and law enforcement there to maintain order.

Trump, just before noon, was giving his speech and he told supporters to march to the Capitol. The crowd at the rally was at least 10,000. By 1:15 p.m., the procession was well on its way there.

As protesters reached the Capitol grounds, some immediately became violent, busting through weak police barriers in front of the building and beating up officers who stood in their way.

Sund’s voice was “cracking with emotion,” Walker later told a Senate committee. Walker immediately called Army leaders to inform them of the request.

Twenty minutes later, around 2:10 p.m., the first rioters were beginning to break through the doors and windows of the Senate. They then started a march through the marbled halls in search of the lawmakers who were counting the electoral votes. Alarms inside the building announced a lockdown.

Sund frantically called Walker again and asked for at least 200 guard members “and to send more if they are available.”

But even with the advance Cabinet-level preparation, no help was immediately on the way.

Over the next 20 minutes, as senators ran to safety and the rioters broke into the chamber and rifled through their desks, Army Secretary McCarthy spoke with the mayor and Pentagon leaders about Sund’s request.

On the Pentagon’s third floor E Ring, senior Army leaders were huddled around the phone for what they described as a “panicked” call from the D.C. Guard. As the gravity of the situation became clear, McCarthy bolted from the meeting, sprinting down the hall to Miller’s office and breaking into a meeting.

As minutes ticked by, rioters breached additional entrances in the Capitol and made their way to the House. They broke glass in doors that led to the chamber and tried to gain entry as a group of lawmakers was still trapped inside.

At 2:25 p.m., McCarthy told his staff to prepare to move the emergency reaction force to the Capitol. The force could be ready to move in 20 minutes.

At 2:44 p.m., Trump supporter Ashli Babbitt was fatally shot by a Capitol Police officer as she tried to climb through a window that led to the House floor.

Shortly after 3 p.m., McCarthy provided “verbal approval” of the activation of 1,100 National Guard troops to support the D.C. police and the development of a plan for the troops’ deployment duties, locations and unit sizes.

Minutes later the Guard’s emergency reaction force left Joint Base Andrews for the D.C. Armory. There, they would prepare to head to the Capitol once Miller, the acting defense secretary, gave final approval.

Meanwhile, the Joint Staff set up a video teleconference call that stayed open until about 10 p.m. that night, allowing staff to communicate any updates quickly to military leaders.

At 3:19 p.m., Pelosi and Schumer were calling the Pentagon for help and were told the National Guard had been approved.

But military and law enforcement leaders struggled over the next 90 minutes to execute the plan as the Army and Guard called all troops in from their checkpoints, issued them new gear, laid out a new plan for their mission and briefed them on their duties.

The Guard troops had been prepared only for traffic duties. Army leaders argued that sending them into a volatile combat situation required additional instruction to keep both them and the public safe.

By 3:37 p.m., the Pentagon sent its own security forces to guard the homes of defense leaders. No troops had yet reached the Capitol.

By 3:44 p.m., the congressional leaders escalated their pleas.

“Tell POTUS to tweet everyone should leave,” Schumer implored the officials, using the acronym for the president of the United States. House Majority Leader Steny Hoyer, D-Md., asked about calling up active duty military.

At 3:48 p.m., frustrated that the D.C. Guard hadn’t fully developed a plan to link up with police, the Army secretary dashed from the Pentagon to D.C. police headquarters to help coordinate with law enforcement.

Trump broke his silence at 4:17 p.m., tweeting to his followers to “go home and go in peace.”

By about 4:30 p.m., the military plan was finalized and Walker had approval to send the Guard to the Capitol. The reports of state capitals breached in other places turned out to be bogus.

At about 4:40 p.m. Pelosi and Schumer were again on the phone with Milley and the Pentagon leadership, asking Miller to secure the perimeter.

But the acrimony was becoming obvious.

The congressional leadership on the call “accuses the National Security apparatus of knowing that protestors planned to conduct an assault on the Capitol,” the timeline said.

The call lasts 30 minutes. Pelosi’s spokesman acknowledges there was a brief discussion of the obvious intelligence failures that led to the insurrection.

It would be another hour before the first contingent of 155 Guard members were at the Capitol. Dressed in riot gear, they began arriving at 5:20 p.m.

They started moving out the rioters, but there were few, if any, arrests. by police.

At 8 p.m. the Capitol was declared secure.