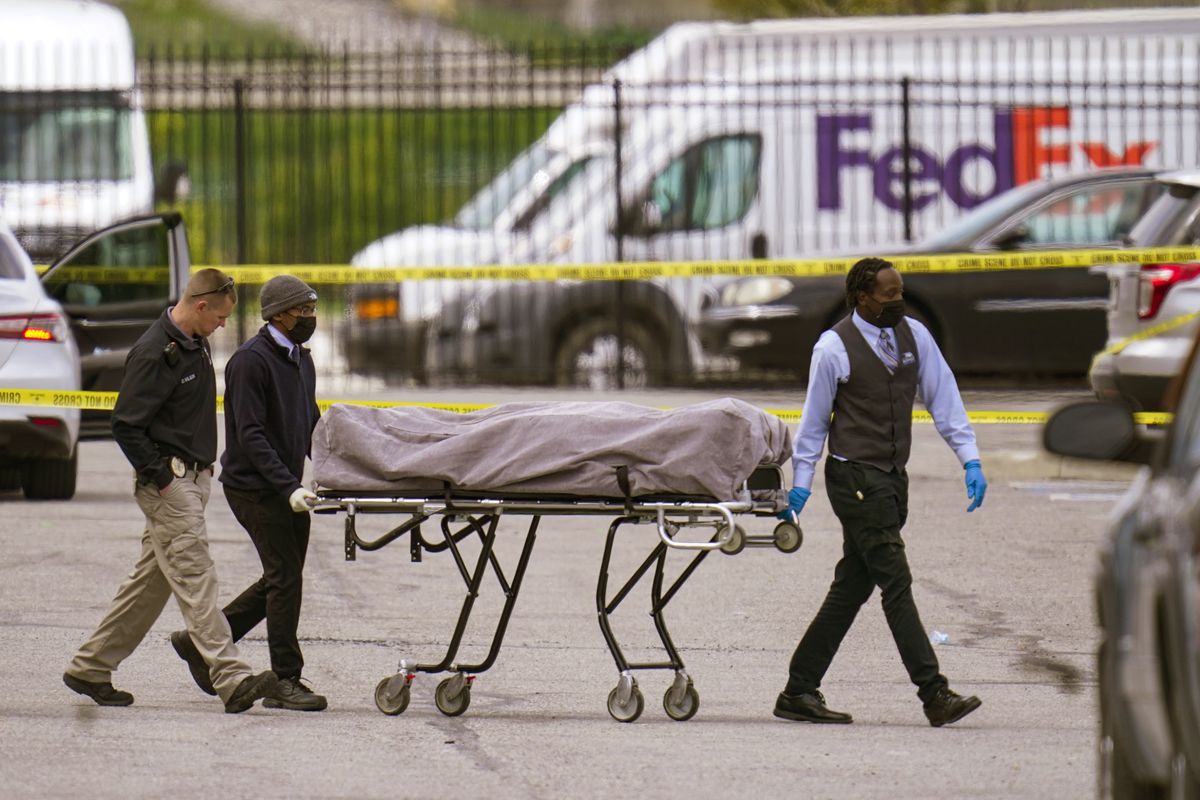 A body is taken from the scene where multiple people were shot at a FedEx Ground facility in Indianapolis, Friday, April 16, 2021. A gunman killed several people and wounded others before taking his own life in a late-night attack at a FedEx facility near the Indianapolis airport, police said. (AP Photo/Michael Conroy)

A body is taken from the scene where multiple people were shot at a FedEx Ground facility in Indianapolis, Friday, April 16, 2021. A gunman killed several people and wounded others before taking his own life in a late-night attack at a FedEx facility near the Indianapolis airport, police said. (AP Photo/Michael Conroy)

INDIANAPOLIS — Authorities have identified the suspect in a shooting at an Indianapolis FedEx facility as 19-year-old Brandon Scott Hole of Indiana.

Two law enforcement officials briefed on the matter provided the identity to The Associated Press. The investigators are searching a home in Indianapolis associated with Hole and have seized evidence, including desktop computers and other electronic media, the officials said. The officials could not discuss the matter publicly and spoke to the AP on condition of anonymity.

INDIANAPOLIS (AP) — Police scoured a Fedex facility in Indianapolis and searched the suspected gunman’s home Friday looking for a motive for the latest mass shooting to rock the U.S., as family members of the eight victims spent agonizing hours awaiting word on their loved ones.

Authorities identified the shooter as a young man in his 20s but said they had not yet discovered his motive for opening fire with a rifle late Thursday night at a FedEx processing center near the Indianapolis airport. Investigators searched a home they think is the suspected gunman’s Friday afternoon, said Indianapolis Deputy Police Chief Craig McCartt. He did not say what they found or where the home is located.

McCartt said the gunman started randomly shooting at people in the parking lot and then went into the building and continued firing. He said the shooter apparently died by suicide shortly before police entered the building.

“There was no confrontation with anyone that was there,” he said. “There was no disturbance, there was no argument. He just appeared to randomly start shooting.”

McCartt said four people were killed outside the building and another four inside. Several people were also wounded, including five who were taken to the hospital.

The carnage took just a couple of minutes. “It did not last very long,” he said.

Officials with the coroner’s office began the process of identifying victims Friday afternoon, a process they said would take several hours.

Police Chief Randal Taylor noted that a “significant” number of employees at the facility are members of the Sikh community, and the Sikh Coalition later confirmed that members of the community were among the wounded and killed.

The coalition, which identifies itself as the largest Sikh civil rights organization in the U.S., said in a statement that it expected authorities to “conduct a full investigation — including the possibility of bias as a factor.” The coalition’s executive director, Satjeet Kaur, noted in the statement that more than 8,000 Sikh Americans live in Indiana.

The families’ agonizing waiting was exacerbated by the fact that most employees aren’t allowed to carry cellphones inside the FedEx building, making contact with them difficult.

“When you see notifications on your phone, but you’re not getting a text back from your kid and you’re not getting information and you still don’t know where they are … what are you supposed to do?” Mindy Carson said early Friday, fighting back tears.

Later Friday morning, Carson said she had heard from her daughter Jessica, who works in the facility and that she was OK. She was going to meet her, but didn’t say where.

FedEx said in a statement that cellphone access is limited to a small number of workers in the dock and package sorting areas to “support safety protocols and minimize potential distractions.”

“This is a devastating day, and words are hard to describe the emotions we all feel,” he wrote in an email to employees.

The killings marked the latest in a string of recent mass shootings across the country and the third mass shooting this year in Indianapolis. Five people, including a pregnant woman, were shot and killed in the city in January, and a man was accused of killing three adults and a child before abducting his daughter during at argument at a home in March. In other states last month, eight people were fatally shot at massage businesses in the Atlanta area, and 10 died in gunfire at a supermarket in Boulder, Colorado.

Indianapolis Mayor Joe Hogsett said the community must guard against resignation and “the assumption that this is simply how it must be and we might as well get used to it.”

President Joe Biden said he had been briefed on the shooting and called gun violence “an epidemic” in the U.S.

“Too many Americans are dying every single day from gun violence. It stains our character and pierces the very soul of our nation,” he said in a statement.

House Speaker Nancy Pelosi said she was “horrified and heartbroken” by the shooting and called for congressional action on gun control.

“As we pray for the families of all affected, we must work urgently to enact commonsense gun violence prevention laws to save lives & prevent this suffering,” the Democratic leader said in a tweet.

A witness said he was working inside the building when he heard several gunshots in rapid succession.

“I see a man come out with a rifle in his hand and he starts firing and he starts yelling stuff that I could not understand,” Levi Miller told WTHR-TV. “What I ended up doing was ducking down to make sure he did not see me because I thought he would see me and he would shoot me.”

A man told WTTV that his niece was sitting in the driver’s seat of her car when the gunfire erupted, and she was wounded.

“She got shot on her left arm,” said Parminder Singh. “She’s fine, she’s in the hospital now.”

Gov. Eric Holcomb ordered flags to be flown at half-staff until April 20, and he and others decried the shooting.

Chris Bavender, a spokesperson for the FBI’s Indianapolis office, said the bureau is helping with the investigation.