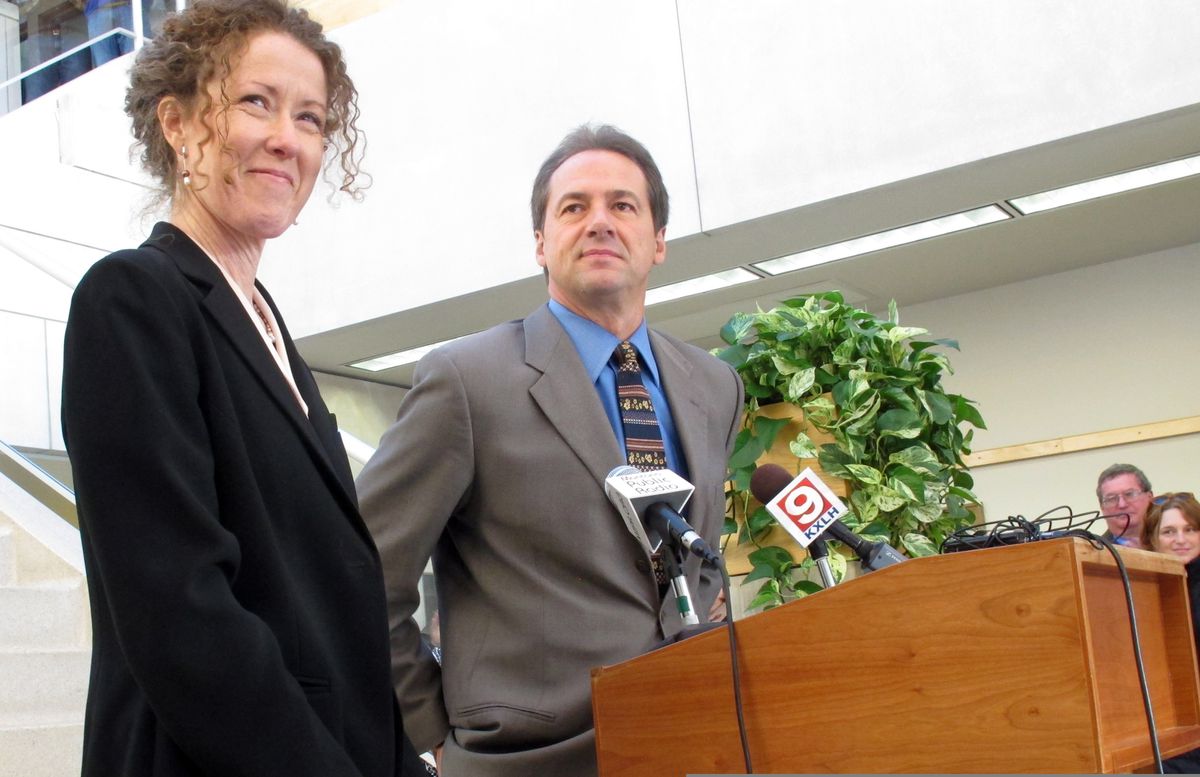 In this Dec. 14, 2012, file photo, Tracy Stone-Manning, left, is named by Gov.-elect Steve Bullock to run the Montana Department of Environmental Quality, in Helena, Mont. Stone-Manning has been nominated by President Joe Biden to lead an agency that oversees about a quarter-billion acres of public lands in western states. (Matt Gouras / AP File)

In this Dec. 14, 2012, file photo, Tracy Stone-Manning, left, is named by Gov.-elect Steve Bullock to run the Montana Department of Environmental Quality, in Helena, Mont. Stone-Manning has been nominated by President Joe Biden to lead an agency that oversees about a quarter-billion acres of public lands in western states. (Matt Gouras / AP File)

Tracy Stone-Manning of Missoula, Montana, was nominated on Thursday to direct the Interior Department’s Bureau of Land Management, which has jurisdiction over about a quarter-billion acres and one-third of the nation’s underground minerals, including huge reserves of oil, natural gas and coal. The agency regulates drilling, mining, grazing and other activities and is set to play a key role in Biden’s commitment announced Thursday to cut climate warming emissions from fossil fuels by half by 2030.

Stone-Manning, 55, spent the past four years at the National Wildlife Federation, where she led the group’s efforts to preserve public lands for wildlife, hiking, hunting and other nonindustrial uses.

She previously worked as chief of staff to former Montana Gov. Steve Bullock, as an aide to Montana Democratic Sen. Jon Tester and three decades ago as a spokesperson for the activist environmental group Earth First.

If confirmed, Stone-Manning would serve under Interior Secretary Deb Haaland, a former Democratic congresswoman from New Mexico who was confirmed over opposition from Republicans citing her criticisms of the oil and gas industry.

The confrontations resemble political fights that took place over many of former President Donald Trump’s appointees — only now it’s environmentalists and progressive activists under scrutiny versus the industry lobbyists favored by Trump.

Stone-Manning opposed Trump’s drilling-friendly policies as destructive to public lands and said in 2019 that the Republican’s agenda had thrown the balance between conservation and development “out of whack.”

Haaland said in a statement that Stone-Manning and Bryan Newland — whom Biden nominated Thursday to be assistant secretary for Indian Affairs — would “help lead the Interior Department’s efforts to pursue a clean energy future, engage Tribal communities and governments, and protect our land, waters and wildlife habitats for generations to come.”

Newland was tribal president of the Bay Mills Indian Community in Michigan and served as a policy adviser for Indian Affairs at Interior under former President Barack Obama.

A spokesperson for Montana Sen. Steve Daines, who sought unsuccessfully to block Haaland’s nomination, said Republicans would be looking closely at Stone-Manning’s years as an environmental activist and her ties to conservation groups that poured money into the 2020 election.

“We’re digging through and looking at her record and history on these types of issues,” spokesperson Katie Schoettler said.

Daines, she said, wants to ensure federal lands remain open for both conservation and energy development.

National Wildlife Federation CEO Collin O’Mara said he has known Stone-Manning since she led Montana’s Department of Environmental Quality for two years beginning in 2013 and considers her a “common-sense conservationist.”

“I think Tracy understands the way we manage our public lands isn’t an either or choice,” he said. “Her track record is really balanced throughout her career, especially over the last 20 years.”

The land management bureau’s director post went unfilled for four years under Trump, who instead relied on a string of acting directors to execute a loosening of restrictions on industry. Chief among them was conservative lawyer William Perry Pendley, who before he took the position advocated for selling off federal lands.

Pendley was ordered removed by a federal judge after leading the bureau for more than year without required Senate confirmation and getting sued by Montana’s governor.

Stone-Manning lined up with Bullock in that fight and sharply criticize Pendley as an illegal appointee who “thumbed his nose at a federal judge” by staying on at the bureau after his authority was removed.

Montana Petroleum Association director Alan Olson, who worked with Stone-Manning on a climate council established by Bullock, described her as highly intelligent and “left of center” but not extreme in her politics and willing to listen to opposing views.

But Olson added that he expects her to get as much pushback from Republicans as Trump appointees got from Democrats and their allies, including Stone-Manning.

“Tracy went after Pendley. She can expect the same,” he said.