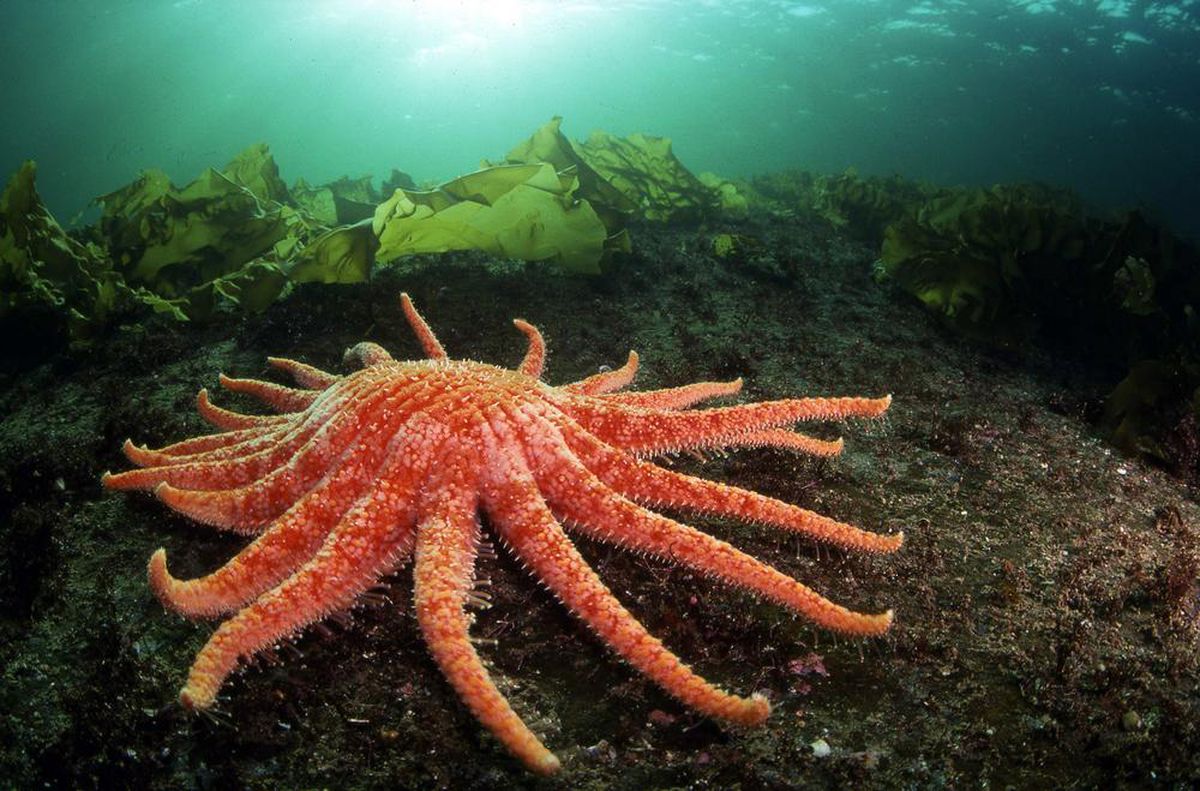 In an island laboratory off the coast of Washington state, scientists are bringing back to life a gorgeously ferocious predator that suddenly perished amid a climate change-driven marine heat wave seven years ago.

A disease magnified by a warming ocean killed an estimated 5.75 billion sunflower sea stars between 2013 and 2017 - nearly 91% of the global population that stretched from Mexico to Alaska. Now an initiative that is breeding the sea star in captivity for the first time may be the best chance to revive both the species and carbon dioxide-sequestering kelp forests also decimated by climate change.

The three-foot-wide invertebrate once sped across the ocean floor on 15,000 tube feet, its 24 Technicolor arms gobbling up purple sea urchins and other critters. With the species functionally extinct in California, seaweed-eating purple urchins have proliferated, devouring bull kelp forests along a 200 mile stretch of the north coast where the sunflower sea star was the urchins’ main predator. That has had disastrous consequences for hundreds of marine species, including commercially valuable abalone, that depend on seaweed. Kelp cover has fallen more than 95% since 2014, devastating fishing communities.

Repopulating the ocean with captive-bred sea stars could be years away. But the work under way at the University of Washington’s Friday Harbor Laboratories on San Juan Island to resurrect a nearly extinct species points to a new conservation strategy - call it the Jurassic Park approach to combating climate change.

“I’m afraid it’s coming to that,” says marine ecologist Drew Harvell, a professor emeritus at Cornell University and a resident researcher at Friday Harbor Labs, who studies the relationship between ocean-borne disease and climate change. “I think it’s going to be part of our toolkit to handle some of the unexpected damage from climate change.”

Laura Rogers-Bennett, a marine scientist with the University of California, Davis, and the California Department of Fish and Wildlife, says the extreme impact of climate change on kelp forests leaves little choice but to attempt such long shots to restore a critical ecosystem.

“I don’t see that we’ve got any other options,” says Rogers-Bennett, whose research has documented the kelp die-off. “They’re not capable of bouncing back on their own. We have to do something.”

As ocean temperatures rise, the elimination of a single species can cause a finely-balanced ecosystem to abruptly come crashing down. “It’s like Jenga,” says Jason Hodin, a senior scientist at Friday Harbor Labs who runs the sunflower sea star breeding program. “We are removing key members of the food chain by overfishing, climate change, and other ecological insults. If you don’t look too carefully, an ecosystem looks robust. But then it can take just one more insult to bring the whole structure down.”

Humans have long played Jenga with Northern California’s kelp forests. First, we removed purple urchin-eating sea otters, which were hunted to extinction in the 19th century. Overfishing and pollution in the 20th century further weakened kelp. Cyclical heat waves drastically reduced kelp cover from time to time but predators like the sunflower sea star kept purple urchins in check, and when waters cooled the seaweed returned. Then between 2013 and 2016, we removed one too many pieces of the puzzle. The unprecedented heat marine wave deprived kelp of nutrients as it exacerbated the disease that wiped out sunflower sea stars.

Now the question is, can captive-bred sunflower sea stars be plugged back into the marine ecosystem to help rebuild kelp forests?

Progress so far has been encouraging. In a small building overlooking the Salish Sea crammed with jars of larvae, water filtration equipment, and containers of sea star chow, Hodin shows the results of two years’ work to breed the animals.

Two years after the outbreak of sea star wasting disease in 2013, extensive surveys by California wildlife officials found only one sunflower sea star along the central and northern coasts of the state and none have been seen since 2016, according to an assessment that led the International Union for Conservation of Nature in December to declare the species critically endangered.

The disease, which affects about 20 sea star species, is horror-movie gruesome. Lesions spread over the sea star’s body, and as it disintegrates its arms fall off, leaving behind a pulpy pile of limbs.

The Nature Conservancy was working on kelp restoration strategies and approached Hodin, an expert on marine larvae, about funding research to determine if sunflower sea stars could be reared in captivity.

After Hodin agreed to establish a breeding program, just how few of the invertebrates remained became clear when his team set out in March 2019 to collect adult sunflower sea stars. “Historically, we could have walked onto the dock on three different low tide days and pulled up 15 stars and we wouldn’t even have gotten wet,” he says. Instead, it took six months to find 30 animals.

Colored in iridescent shades of orange, pink, and purple, the adult sunflower sea stars live in tanks that line the rear of the lab building. As lab assistant Fleur Anteau places mussels harvested from around the island on the arms of sea stars named Deep Blue and Hamilton, the creatures quickly scarf down the morsels.

Hodin’s team first tried to induce the sea stars to spawn by injecting their gonads with a hormone. While the males spawned, the females did not. They subsequently turned to a more brutal form of invitro fertilization. Each arm of a sea star contains reproductive organs so the researchers cut off a limb, removed the eggs, and placed them in a dish. When the hormone was added, the eggs matured, and were then fertilized with sperm from the males. (While it sounds traumatic, sea stars routinely regenerate lost arms.)

Soon the lab had thousands of microscopic star sea larvae. Although Friday Harbor scientists are pioneers in rearing marine larvae, sunflower sea stars were uncharted territory. “We didn’t know what the juveniles eat, we didn’t know what conditions they need in order to be able to grow,” says Hodin.

He soon found out that bigger young sunflower sea stars will eat the smaller ones. Hodin gestures at a table where the oldest crop of sea stars sit in small containers. “We’ve separated them by size, because they were cannibalizing one another,” he says.

Of the first batch of 50 juveniles, only 13 have reached their one-year birthdays, a survival rate likely skewed by the Covid-19 pandemic when lockdown restrictions limited researchers’ access to the lab. A 2-inch-wide tawny-colored juvenile clings to the side of one container, a pile of purple varnish clam shells underneath its arms.

It’s unknown when larvae in the wild transform into juveniles, settling in one place on the ocean floor until they reach adulthood. In the lab, that change happens in 50 days. The latest batch of 100 juveniles occupy rows of water-filled glass jars. To the naked eye, they look like orange dots, though when viewed through a microscope arms and tube feet are visible.

The sunflower sea star project was designed to demonstrate the viability of captive breeding and to develop techniques to rear larvae. With that mission largely accomplished, Hodin is optimistic about the potential for rearing captive-bred sunflower sea stars by the thousands and reintroducing them to areas overrun by purple urchins.

Many questions about reintroduction, though, remain unanswered.

“We don’t know yet what is the best size to release these animals or the best age,” says Walter Heady, a senior scientist at the Nature Conservancy in Santa Cruz, Calif. “We don’t know the number of sea stars needed to contribute to the ecosystem health of kelp forests. Do we need to plant them out individually by hand or can we dump large numbers in the water?” It’s also not known when they reach reproductive age, but researchers estimate they can live 50 years or longer.

A paper published in the journal Communications Biology in March analyzed the loss of kelp cover in Northern California and found the emergence of a “persistent, altered ecosystem” dominated by purple urchins that researchers said would be difficult to change.

Meredith McPherson, the lead author of the study and a doctoral student at the University of California, Santa Cruz, says a key issue is whether sufficient prey exists to support reintroduced predators such as sunflower sea stars. While there are hundreds of millions of purple urchins, many are of little nutritional value; after running out of kelp to eat they essentially hibernate in a semi-starved state.

“It would be very difficult for any kind of predator to get enough nutrients and calories as besides urchins, which are starving, there’s not really much else to eat,” she says. “Introducing predators would have to be done really strategically.”

Hodin thinks one strategy would be to first reintroduce captive-bred juveniles, which eat just about anything. The restoration of Southern California kelp forests also offers some hope for the north coast. The Bay Foundation in Santa Monica has restored more than 50 acres of giant kelp since 2013 by removing purples urchins by hand.

Scientists say the biggest hurdle to repopulating the ocean with sunflower sea stars is that they have yet to identify the specific pathogen in sea star wasting disease that is killing the animals and how it spreads. Until they do, reintroduction risks exposing captive-bred sea stars to the disease.

Harvell notes the captive breeding program may also be essential to solving that conundrum as comparing sea stars reared in isolation to sick animals in the wild could help researchers pinpoint the pathogen and how it propagates.

“The epidemic overran us and there was no way to get clean animals to work on,” she says. “Jason can breed us clean baby stars that we know have had no previous exposure to disease.”