In a major milestone, the nation’s earthquake early warning system now covers the entire West Coast of the continental US 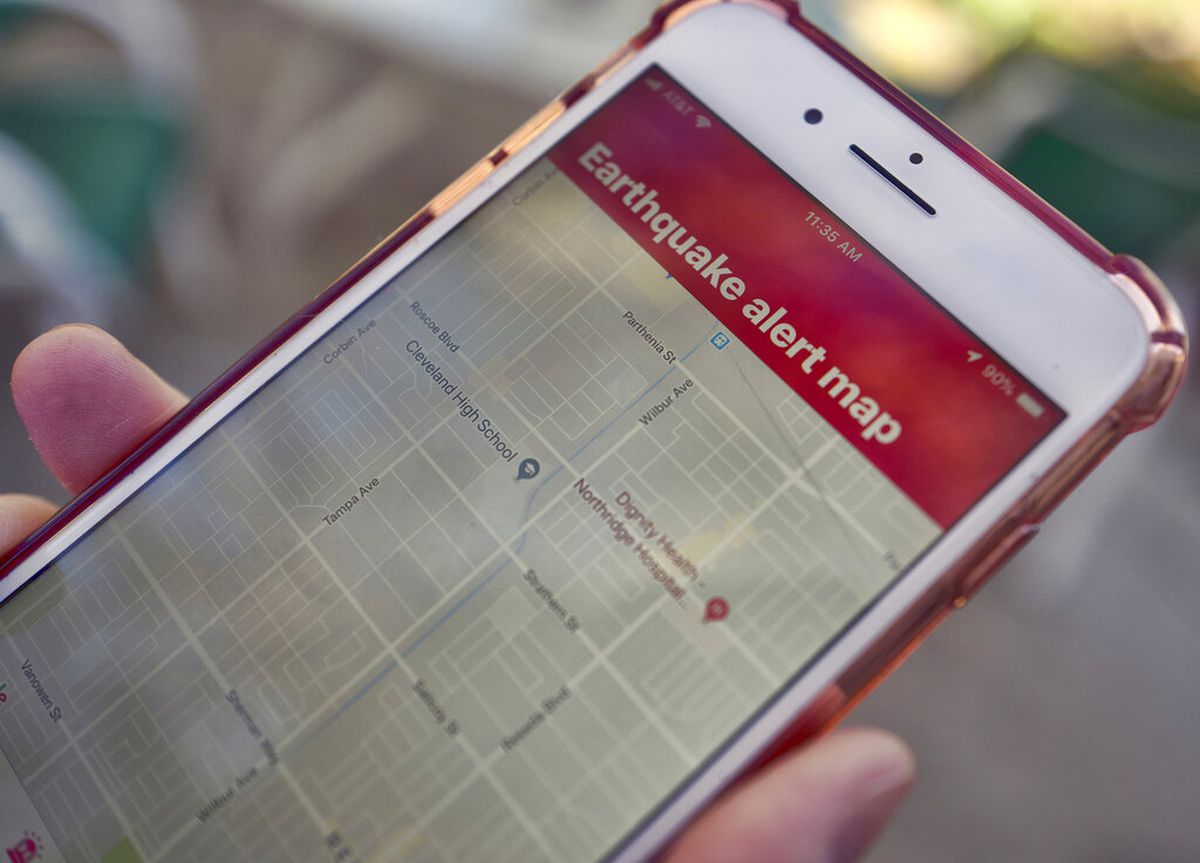 In this Jan. 3, 2019, file photo, a mobile phone customer looks at an earthquake warning application on an iPhone in Los Angeles. (Richard Vogel / AP File)

In this Jan. 3, 2019, file photo, a mobile phone customer looks at an earthquake warning application on an iPhone in Los Angeles. (Richard Vogel / AP File)

In a major achievement years in the making, the U.S. earthquake early warning system will now be able to issue alerts to cellphone users anywhere on the West Coast of the continental U.S. beginning this morning.

On Tuesday at 8 a.m., mobile users in Washington state finally gained access to the earthquake early warning system’s mobile alerts. The alert system for mobile users was launched in Los Angeles in late 2018, and was expanded across the rest of California in late 2019. In March, Oregon mobile phone users began getting access to earthquake early warning system alerts.

The announcement means that anywhere from the Canadian border to the Mexican border, cellphone users are eligible to get early warnings that could give seconds to perhaps more than a minute of warning that shaking from a distant earthquake is on its way. The system works because the speed of today’s communications systems is faster than the speed at which shaking waves move through the ground.

“Now all three states will have alerts delivered to the cellphones,” said Robert de Groot, a U.S. Geological Survey earthquake scientist and communications coordinator for its ShakeAlert early warning system.

Because smaller earthquakes are far more common than the most powerful, catastrophic quakes, if residents get an alert, they’ll likely have a few seconds of warning before shaking arrives from a distant quake. That could be enough time for people to drop, cover and hold on, and for automatic systems to send alerts to hospitals telling surgeons to remove scalpels from patients; elevators to stop at the nearest floor; and trains to start slowing down, decreasing the risk of a derailment.

The earthquake early warning system could also give residents in the Pacific Northwest as much as 80 seconds of warning ahead of shaking from a magnitude 9 earthquake along the Cascadia Subduction Zone, a monstrous fault zone hundreds of miles off the West Coast, stretching under the Pacific Ocean from west of California’s Cape Mendocino to west of Vancouver Island.

The Cascadia Subduction Zone last ruptured in such a quake on Jan. 26, 1700, and sent catastrophic tsunamis not only to the Pacific Northwest, but thousands of miles away to Japan.

The U.S. is relatively late in developing an earthquake early warning system. Such systems have been in place for years in Japan, Taiwan and Mexico, with development usually beginning or accelerating after catastrophic death tolls from past earthquakes. The U.S. system, however, gradually began to gain bipartisan political support without a deadly quake sparking action, with initial efforts jumpstarted by a grant from the Palo Alto-based Gordon and Betty Moore Foundation.

The reach of the earthquake early warning system’s mobile alerts expanded last year with an update to Google’s Android mobile operating system. Google now funnels earthquake early warning alerts directly to Android cellphones in California, Oregon, and with Tuesday’s announcement, Washington. (Apple has not made an agreement with the USGS to develop a similar system for iOS devices.)

In California and Oregon, smartphone users can also download free apps to get earthquake early warning alerts. MyShake, developed by UC Berkeley, warns users that a quake has been detected and tells them to take protective action. QuakeAlertUSA, developed by Santa Monica-based Early Warning Labs, offers some additional tools: a countdown to when shaking is expected to arrive, and also notice about the intensity of shaking to expect, De Groot said.

The city of Los Angeles once had its own earthquake early warning system mobile app, ShakeAlertLA, which was the first such system of its kind. But it was retired at the end of last year, and city officials recommended people download the MyShake app.

It’s OK to download more than one earthquake early warning app, De Groot said. “Getting more than one alert is a good thing, because it sort of acts as a backup,” he said.

The earthquake early warning system got a bit of a test run in Los Angeles County last September when a magnitude 4.5 earthquake hit the South El Monte area. QuakeAlertUSA gave De Groot, in West Los Angeles, a warning just as shaking began at his location, and some users farther away from the epicenter — in the western San Fernando Valley — reported a few seconds of notice before shaking arrived. An alert was sent to 2.2 million Android devices, De Groot said.

In late 2019, the earthquake early warning system sent out its first public alert, warning more than 40 people of shaking — for a magnitude 4.3 earthquake in a remote mountainous area between the Central Coast and the San Joaquin Valley.

For the earthquake early warning system to send an alert to mobile phone apps in a particular area, the earthquake must be recorded as having a magnitude of at least 4.5 and forecast to produce “weak shaking” — the kind that is felt indoors and can feel like a truck driving by. It’s known as level 3 shaking on the Modified Mercalli Intensity Scale.

The magnitude of a quake and forecasted shaking intensity must be more powerful before an earthquake early warning can be dispatched through the Amber Alert-style Wireless Emergency Alert text messaging system. Those alerts can only be triggered for earthquakes of at least magnitude 5, and sent to areas forecast to encounter “light shaking,” which is felt by most people indoors, rattles dishes, windows and doors, and causes walls to make cracking sounds and feels like a heavy truck striking the building. This is known as intensity level 4 shaking of the Modified Mercalli Intensity Scale.

Officials revised the thresholds to trigger alerts for less powerful quakes and less intense shaking after many people in Los Angeles complained the warning system did not issue a warning ahead of the Ridgecrest earthquakes of 2019, the largest of which was magnitude 7.1.

The USGS is still working on building out the earthquake sensor system in rural areas of the West Coast that will eventually make alerts able to be issued even faster. About 70% of the seismic station network is complete, with full completion estimated in late 2025.

Officials are also working to improve the computer software system designed to quickly analyze incoming shaking. One flaw that became apparent after the magnitude 9 earthquake of 2011, which unleashed a deadly tsunami across northeast Japan, is that the earthquake sensing system there initially underestimated the final magnitude of the quake.

“Right now, the algorithms work really, really well — up to magnitude 8. And that was the case in Japan,” De Groot said.