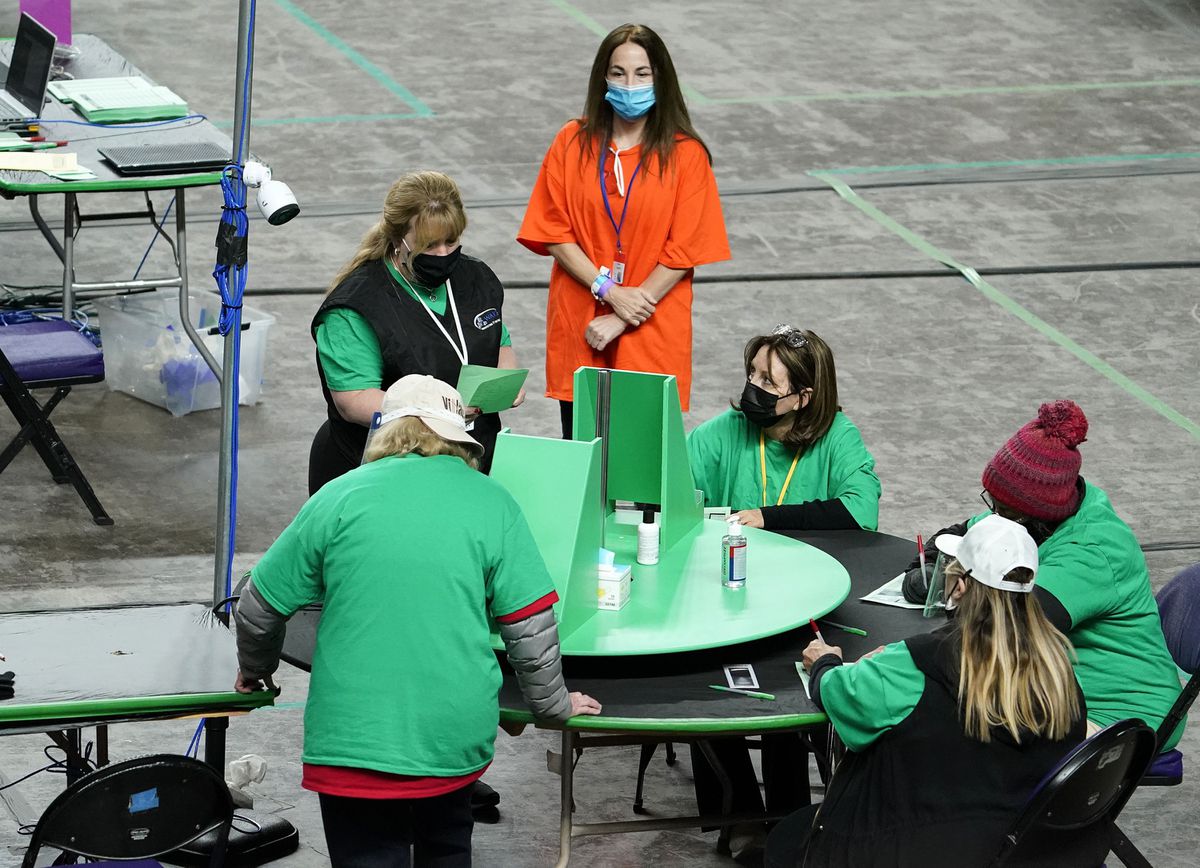 In this April 29, 2021 file photo, Maricopa County ballots cast in the 2020 general election are examined and recounted by contractors working for the Florida-based company Cyber Ninjas, hired by the Arizona State Senate. (Rob Schumacher/The Arizona Republic via AP, Pool)

In this April 29, 2021 file photo, Maricopa County ballots cast in the 2020 general election are examined and recounted by contractors working for the Florida-based company Cyber Ninjas, hired by the Arizona State Senate. (Rob Schumacher/The Arizona Republic via AP, Pool)

Ballots have been left unattended on counting tables.

Arizona Secretary of State Katie Hobbs, a Democrat, on Wednesday sent a letter outlining a string of problems that she said observers from her office have witnessed at a Republican-led recount of the 2020 presidential election results in Arizona’s largest county.

In the six-page letter, Hobbs wrote that elections are “governed by a complex framework of laws and procedures designed to ensure accuracy, security, and transparency” but that the procedures governing the ongoing recount in Phoenix “ensure none of those things.”

Former Arizona secretary of state Ken Bennett (R), who is acting as a spokesman for the audit, did not immediately respond to a request for comment. But the audit’s Twitter account, @ArizonaAudit, tweeted that Hobbs’s allegations were “baseless claimes [sic].”

The recount of Maricopa County’s nearly 2.1 million ballots was ordered by the GOP-led state Senate, despite the fact that county officials, as well as state and federal judges, found no merit to claims that the vote was tainted by fraud or other problems.

The company has been criticized for running an opaque process and not following state rules for elections and recounts. Its audit has been embraced by Trump and his allies as the key to overturning his election loss, and it has spawned a wave of unfounded theories about how the Maricopa vote could have been rigged.

Fueling the speculation has been the unorthodox practices of the contractors, who have been conducting physical examinations of the ballots, including inspecting their weight and thickness and examining folds on ballots under microscopes. At one point, workers were holding ballots up to ultraviolet lights.

The purpose of such inspections has not been clear. Bennett said the workers were hunting for watermarks - though county officials have said the Maricopa County ballots do not bear watermarks.

In her letter, Hobbs wrote that the paper analysis is “completely unnecessary” and does “little other than further marginalize the professionalism and intent of this ‘audit.’ "

In an interview Wednesday with a local CBS affiliate, John Brakey — an assistant to Bennett who has described himself as a Democrat who supported Sen. Bernie Sanders (I-Vt.) in 2020 — said workers were looking for traces of bamboo.

Brakey cited unfounded accusations that 40,000 ballots were flown from Asia into Arizona. He added that he does not believe that theory.

“What they’re doing is to find out if there’s bamboo in the paper,” he said, adding: “They’re doing all sorts of testing to prove if it was or wasn’t, and that’s very important, because the only way you’re going to persuade people on changing is having facts, and we’re on a mission for facts.”

Bennett did not immediately respond to a question about whether workers are searching for traces of bamboo.

Independent observers had initially been barred from monitoring the recount, but they were allowed in after Hobbs and the Arizona Democratic Party filed a lawsuit against the audit, calling the process a violation of state law.

Hobbs and the party agreed to settle that suit Wednesday.

As part of the settlement, the state Senate and Cyber Ninjas agreed in writing that they would maintain the confidentiality of voter information and the security of ballots and voting equipment, which they obtained from Maricopa County using a subpoena. They also agreed that they would continue to allow access for Hobbs’s observers, as well as the news media, which had inconsistent access to the audit.

Hobbs wrote in her letter Wednesday that she has concerns about the process, based both on what observers have seen and how Cyber Ninjas has described the process it is using.

She said it is not clear how the dozens of audit workers are going about determining voter intent to decide how they should count each ballot - a process that generally involves detailed guidelines and training for election workers.

Although each ballot is being tallied by three workers, she wrote that observers in some cases observed workers discussing how to count a ballot with one another or being instructed how to count it by a third worker - both violations of best practices.

Hobbs said observers also saw inconsistent treatment of ballots once they were unpacked from boxes, raising the possibility that counted and uncounted ballots could become intermingled.

She questioned whether procedures were in place to hire qualified, unbiased people to serve as ballot counters, noting that reporters have seen former state Rep. Anthony Kern, a Republican, among the ballot counters. Kern was on the November ballot and was photographed attending pro-Trump rallies in Washington on Jan. 6.

Hobbs said the auditors were able to provide no information as to how they will go about adding up information from the tens of thousands of hand-completed tally sheets being produced by employees as they sift through ballots.

“This is not transparency,” she wrote.

The Senate agreed to pay $150,000 for the audit, but funding has been supplemented by private donations being raised by Trump allies.

People who recently have interacted with Trump at his South Florida Mar-a-Lago resort say he has become fixated on the Arizona count and is convinced that it could spark other states to reexamine their votes.

“I wouldn’t be surprised if they found thousands and thousands and thousands of votes,” Trump told a crowd attending a party at Mar-a-Lago last week, according to a video posted online by an attendee. “So we’re going to watch that very closely. And after that, you’ll watch Pennsylvania and you’ll watch Georgia and you’re going to watch Michigan and Wisconsin. You’re watching New Hampshire. . . . Because this was a rigged election, everybody knows it.”

While Senate President Karen Fann, a Republican, and Bennett promised that the recount of the 2020 ballots would be transparent, Cyber Ninjas fought to keep documents outlining its procedures secret. A judge previously forced it to publish some documents describing its practices.

Media access to the Veterans Memorial Coliseum was for a time barred completely and later severely restricted. Some portions of the audit - including forensic analysis of voting equipment - is being conducted entirely out of public view.

The audit recruited volunteer observers to roam the floor during the count; Bennett has said that most are Republicans. ABC15 in Phoenix reported this week that the audit’s official observers are being required to sign nondisclosure agreements.

Hobbs and the state Democratic Party, along with a Democratic member of the Maricopa County Board of Supervisors, agreed to settle their lawsuit after a state judge declined last month to temporarily halt the count while the litigation proceeded. The judge had also signaled that if the lawsuit went forward, he might rule that virtually no state election laws apply to post-election audits, such as the one being run by the state Senate - potentially opening the door to routine partisan-led challenges of election results.

Roopali Desai, a lawyer for the Democratic Party, said the lawsuit led to important concessions that will bring more transparency to a process that has been criticized for being opaque and is not following state rules for elections and recounts.

If Cyber Ninjas violates the terms of the agreement, including by blocking access to Hobbs’s observers, the secretary of state or the party could seek new intervention from the court, she said.

“We have won a significant victory in being able to get information and access,” Desai said.

As part of the settlement, Cyber Ninjas also formalized its previous assurance that it is not attempting to compare signatures on the envelopes of ballots sent by mail with voter signatures maintained on file. It requires that the company and the Senate provide at least 48 hours’ notice should they decide to attempt to perform a signature match, so Democrats could first seek a court intervention.

Trump and his supporters had expressed concern with how the county attempted to verify signatures on mail-in ballots. But election experts say authenticating signatures on ballots requires special expertise and requires examining some personal information about voters.

Rosalind Helderman is a political enterprise and investigations reporter for The Washington Post. She joined The Post in 2001.