Pentagon tracks Chinese rocket booster as it falls back toward Earth 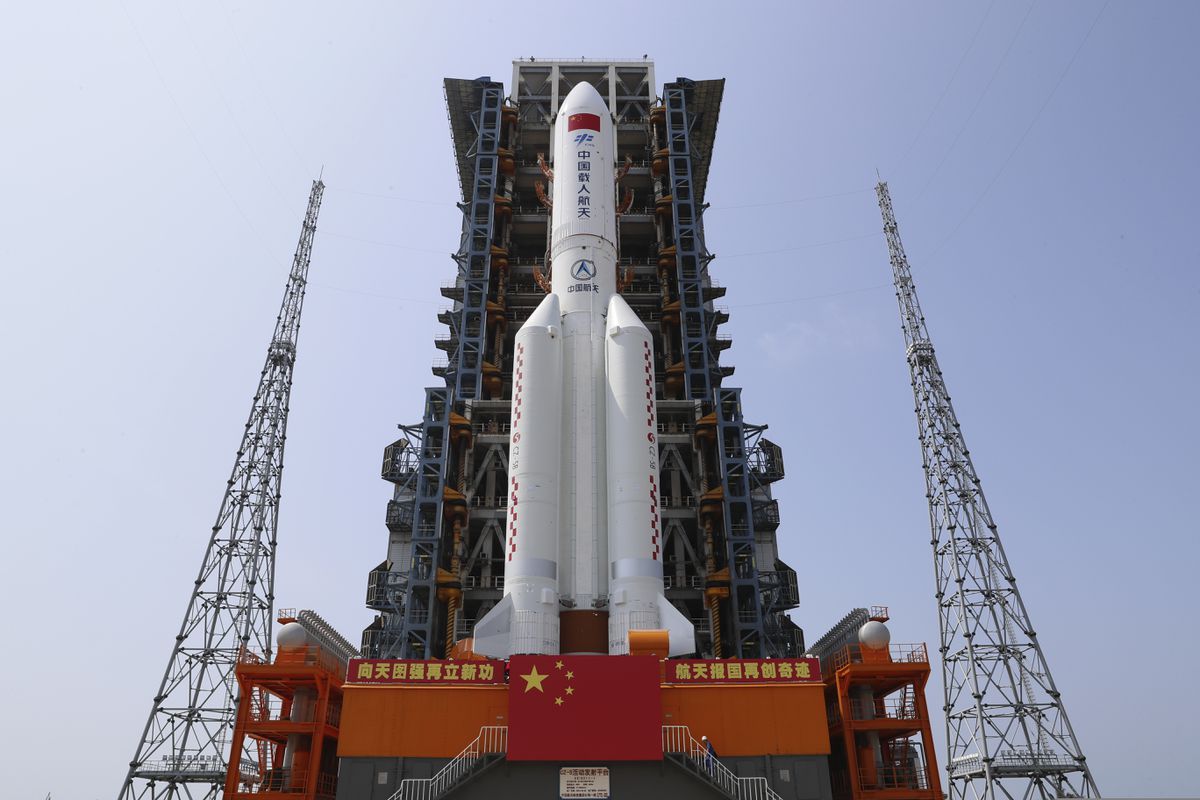 The core module of China's space station, Tianhe, on the Long March-5B Y2 rocket is moved to the launching area of the Wenchang Spacecraft Launch Site in southern China's Hainan Province on April 23, 2021. (Guo Wenbin/Xinhua via AP)

The core module of China's space station, Tianhe, on the Long March-5B Y2 rocket is moved to the launching area of the Wenchang Spacecraft Launch Site in southern China's Hainan Province on April 23, 2021. (Guo Wenbin/Xinhua via AP)

The U.S. Space Command is tracking a large Chinese rocket booster that is tumbling uncontrollably through space and is expected to come crashing down to Earth sometime this weekend.

It’s not clear where the 22-metric-ton rocket stage would land or what, if anything, the Pentagon would do if it were to come down over a populated area, Pentagon spokesman John Kirby told reporters this week.

“I don’t want to hypothesize or speculate about possible actions the department might or might not take here,” he said. “We’re tracking it. We’re following it as closely as we can. It’s just a little too soon right now to know where it’s going to go or what if anything can be done about that.”

While the booster would be among the 10 largest objects ever to reenter Earth’s atmosphere on an uncontrolled trajectory, the risk for those on the ground is very low — astronomically low, scientists say. There’s a roughly 70 percent chance debris will fall mainly into the ocean, and even if not, the odds of it affecting a populated area are minuscule. There are no recorded instances of a human ever being killed by reentering space debris — though a cow in Cuba did lose its life in 1961.

When an object falls out of orbit, the amount of debris that makes it to the ground depends on the object’s size, shape, mass and the melting temperatures of all materials used. Even the biggest satellites produce a comparatively tiny amount of debris.

Some scientists estimate that 9 metric tons of the Long March 5B rocket may survive re-entry. The rocket was launched late last month, hoisting the first module of a space station China is assembling in orbit as part of the nation’s ambitious plans in space.

Unlike most rocket boosters, which deliver their payloads to orbit and then fall back to Earth in a predetermined area, the Long March 5B rocket, powered by four side boosters, reached orbit and is expected to stay aloft a few days before it re-enters the Earth’s atmosphere.

Scientists won’t know where it will land until a few hours before the debris strikes. Most objects re-enter Earth’s outer atmosphere at about 18,000 mph. That means even a few minutes’ discrepancy could mean debris falling on the opposite side of a continent.

Part of the mystery surrounding where the debris enters is due to uncertainties about air density in Earth’s “mesosphere,” the atmospheric layer 30 to 50 miles high, which can result in varying amounts of air drag.

“We have detailed models of the upper atmosphere, but they’re models that depend on things like today’s solar activity,” explained Jonathan McDowell, an astrophysicist at the Harvard-Smithsonian Center. “Weather forecasting is hard, even in space. The (sun’s) x-ray flux will change the headwind. There are (daily cycles) and (effects at different longitudes) and all other kinds of terms that go into atmospheric density.”

Right now, there’s a 42-hour window, centered on Saturday night, during which the debris may crash down.

The Pentagon tracks thousands of pieces of debris in space, and often warns satellite operators about potential collisions. From time to time, the International Space Station must maneuver to avoid pieces of space junk, which are traveling at 17,500 mph and have the potential to cause enormous damage.

It’s not the first time China has contributed to the growing problem of space debris. In 2007, it shot down a dead satellite with a missile that, according to a statement from the Secure World Foundation, a think tank, “created a cloud of more than 3,000 pieces of space debris, the largest ever tracked.” Much of that debris “will remain in orbit for decades, posing a significant collision threat to other space objects in Low Earth Orbit.”

Last year, during the first flight of the Long March 5B rocket, the booster passed over populated portions of Earth before pieces of debris landed in Africa. The NASA administrator at the time, Jim Bridenstine, criticized the Chinese space agency, according to SpaceNews, saying the event “could have been extremely dangerous. We’re really fortunate in the sense that it doesn’t appear to have hurt anybody.”

Having yet another rocket stage reenter is problematic and poses a challenge for diplomats. “It is very much against the standard practice of the last few years,” said Ted Muelhaupt, the principal director of Aerospace Corporation’s Center for Orbital and Reentry Debris Studies. “We’ve learned our lessons. And when something as big as this is coming down, the expected norms are to bring it down someplace where we know people aren’t, such as the South Pacific.”

Tensions between China and the United States in this arena are growing. After China landed a robotic spacecraft on the far side of the moon, former vice president Mike Pence said it was an attempt to “seize the lunar strategic high ground and become the world’s pre-eminent spacefaring nation.”

The Biden administration this week took a more measured approach. In reaction to the rocket stage falling, White House press secretary Jen Psaki said that the U.S. “is committed to addressing the risks of growing congestion due to space debris and growing activity in space.”

She said the administration wants “to work with the international community to promote leadership and responsible space behaviors. It’s in the shared interests of all nations to act responsibly in space to ensure the safety, stability, security, and long-term sustainability of outer space activities.”