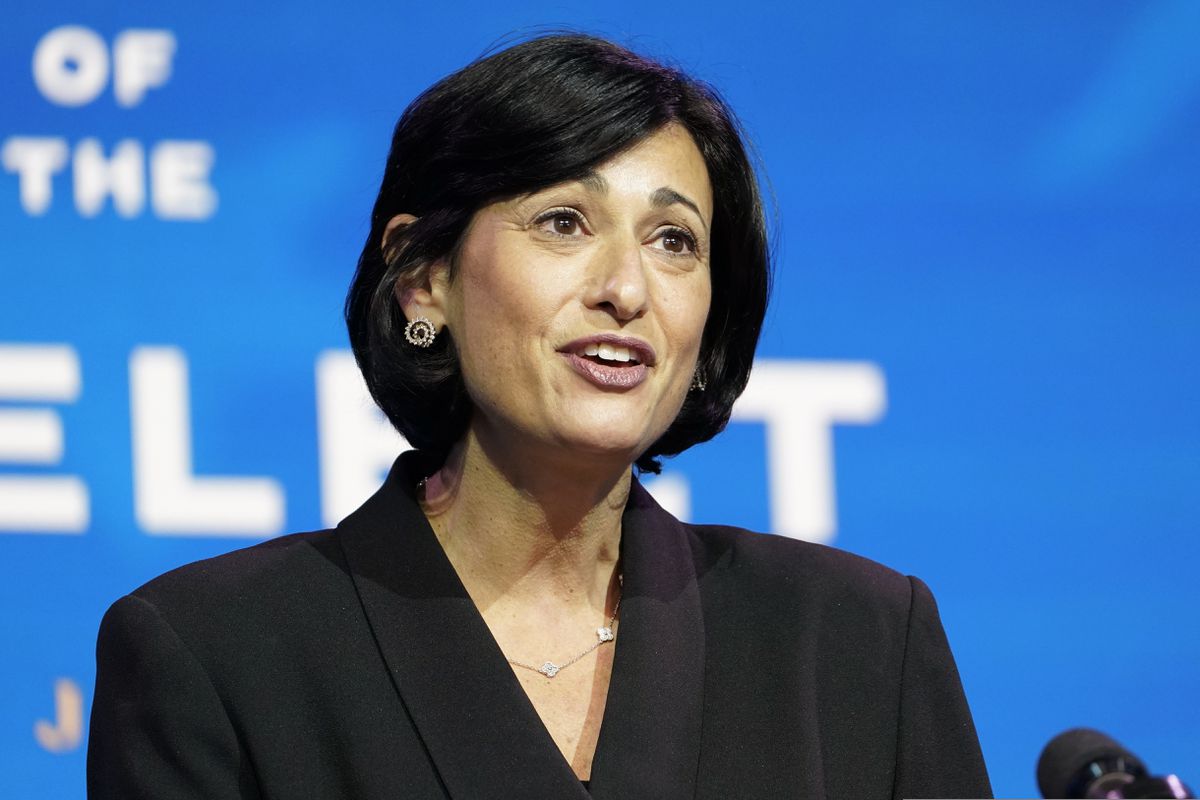 FILE - In this Tuesday, Dec. 8, 2020 file photo, Dr. Rochelle Walensky, speaks during an event in Wilmington, Del. The head of the Centers for Disease Control and Prevention is defending the decision to ease mask-wearing guidance for fully vaccinated people, stressing that increasing political pressure had nothing to do with the abrupt shift in guidelines. (AP Photo/Susan Walsh, File)

FILE - In this Tuesday, Dec. 8, 2020 file photo, Dr. Rochelle Walensky, speaks during an event in Wilmington, Del. The head of the Centers for Disease Control and Prevention is defending the decision to ease mask-wearing guidance for fully vaccinated people, stressing that increasing political pressure had nothing to do with the abrupt shift in guidelines. (AP Photo/Susan Walsh, File)

The nation’s top public health official on Sunday defended her agency’s abrupt reversal on wide-ranging mask recommendations, saying that the Centers for Disease Control and Prevention had weighed new data before announcing that Americans who had been vaccinated could go without masks.

“We now have science that has really just evolved even in the last two weeks,” CDC Director Rochelle Walensky said on ABC’s “This Week,” citing new data that coronavirus vaccines are curbing spread of the disease and offering protection against virus variants. Walensky, who appeared on four separate Sunday morning news shows to explain her agency’s new guidelines, also touted widespread access to those vaccines and called on tens of millions of unvaccinated Americans to go get shots.

“We also need to say that this is not permission for widespread removal of masks,” she added on ABC.

Anthony Fauci, the government’s top infectious disease expert, acknowledged that there was “some merit” to questions about whether CDC could have better laid the groundwork for its messaging shift.

“I would imagine within a period of just a couple of weeks, you’re going to start to see significant clarification of some of the actually understandable and reasonable questions that people are asking,” Fauci said on CBS’s “Face the Nation.”

Thursday’s announcement that CDC was changing almost all masking and distancing recommendations for fully vaccinated Americans caught physicians, state and local leaders and even some White House officials off guard. The Washington Post on Saturday reported that Walensky first signed off on changing her agency’s mask guidance on Monday but continued to defend CDC’s sweeping guidance that Americans wear masks in public, including in a Senate hearing on Tuesday before CDC narrowed its recommendations.

Pressed by “Fox News Sunday” host Chris Wallace about whether the CDC was pressured to roll back its call for widespread masking, Walensky insisted that the shift was driven by public health, not politics.

“It certainly would’ve been easier if the science had evolved a week earlier, and I didn’t have to go to Congress making those statements,” Walensky said. “I delivered it as soon as I can [sic.] when we have the information,” she added, citing new research and falling case numbers.

Walensky also disputed Wallace’s question about whether the CDC was relying on Americans to now follow a “honor system” on masks. The Biden administration has repeatedly said that it will not impose requirements for people to prove they’ve gotten shots, like mandating so-called vaccine passports.

“The honor system is to be honest with yourself,” said Walensky, warning that Americans who weren’t vaccinated and chose to go without masks were putting themselves at risk.

Public health experts have warned that the CDC’s shift on mask-wearing could force grocery stores, restaurants and other businesses into the uncomfortable position of checking whether patrons have been vaccinated.

Walmart, Costco and Trader Joe’s have dropped mask requirements for the vaccinated in recent days. Other major retailers, including Target, Home Depot and CVS, said they will continue to require masks in stores as they review CDC guidance and company policies.

Only 36.7% of Americans are fully vaccinated, according to a Washington Post analysis of CDC data, and 47.1% have received at least one shot.

“Probably the most important thing that businesses could do right now . . . is to work to ensure that it’s easy for their own employees to get vaccinated,” Walensky said on NBC’s “Meet the Press.”

Walensky told reporters that CDC is “actively working” to update the agency’s guidance on safety protections at schools, camps and child care settings. She added that she’s hopeful about the state of the outbreak in the United States, as cases continue to fall.

“I am really cautiously optimistic that we are in a good place right now,” Walensky said on “Fox News Sunday.”

Walensky also sidestepped a question by CNN’s Dana Bash about whether she would continue to wear a mask if she was a pregnant woman.

“That’s going to really be an individual by individual decision . . . it really just depends on how much risk you’re willing to tolerate,” Walensky said.

Fauci also said that he understood questions about why the United States was prioritizing vaccines for teenagers, who are at lower risk for serious complications, even as coronavirus continues to spread abroad. The Biden administration has been under pressure to produce its promised plan to help vaccinate the world, as global virus cases hit new records this month and many developing countries say they do not expect to have widespread access to vaccines for months or years. About 10% of people in India have been vaccinated, according to the University of Oxford’s Our World in Data project, even as the country deals with a raging coronavirus outbreak.

“I feel we do have a moral responsibility as a rich nation to make sure that others in poorer nations are not deprived of interventions that would be lifesaving. But I think we can do both,” Fauci told “Face the Nation” host John Dickerson.