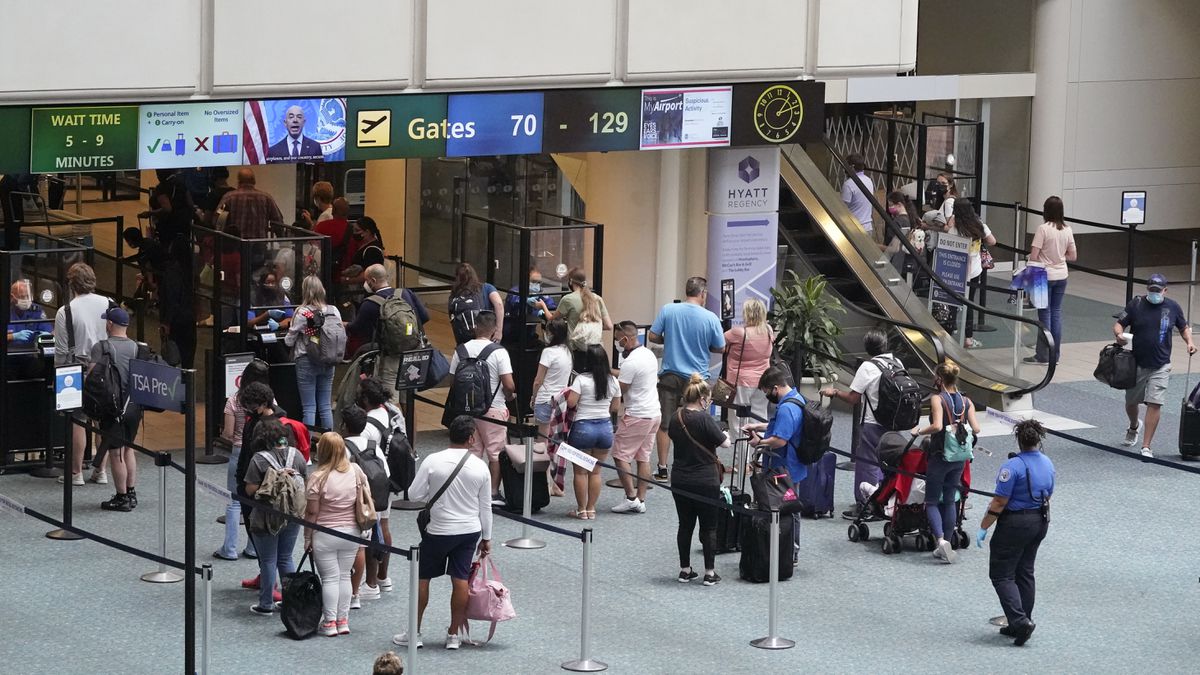 Travelers line up to go through a TSA checkpoint at Orlando International Airport before the Memorial Day weekend Friday, May 28, 2021, in Orlando, Fla. (AP Photo/John Raoux)

Travelers line up to go through a TSA checkpoint at Orlando International Airport before the Memorial Day weekend Friday, May 28, 2021, in Orlando, Fla. (AP Photo/John Raoux)

WASHINGTON - The acting head of the Transportation Security Administration has issued a memo warning that 131 of the nation’s largest airports will face staffing shortages this month while asking office workers to volunteer to assist with airport checkpoints.

Darby LaJoye, who is filling in as the agency’s administrator, wrote that help is needed as travel numbers are forecast to spike through the summer. The volunteers, who were told to expect to serve for up to 45 days, would not be able to screen passengers but could help manage queues and aid with administrative tasks.

“With this increase in volume, TSA must maintain operational readiness and ensure that the screening workforce is available to perform screening functions,” LaJoye wrote in the May 30 memo obtained by The Washington Post.

The request is one measure the TSA has taken in recent weeks to manage staffing shortages as U.S. air carriers record their highest passenger counts of the pandemic. The agency also has promised recurring $500 monthly bonuses to screening officers at airports that are significantly short-staffed, allowed part-time workers to become full-time, adjusted shifts and increased the use of overtime - including requiring officers to work on their days off, according to union leaders.

The TSA says it has recruited 3,100 new employees in recent months and wants another 3,000 by the end of summer, but the latest steps to stretch its existing workforce show the scale of the challenge it faces as air travel rebounds from historic lows.

In a statement, the TSA said it is confident it has the resources to get travelers through checkpoints and onto planes.

“The Transportation Security Administration is well-positioned to meet rising traveler volumes this summer,” the agency said in a statement. “The agency began a concerted recruitment effort this past winter in anticipation of increasing volumes and is on pace with established benchmarks to meet hiring goals.”

In announcing a hiring drive earlier this year, the TSA said it was seeking to recruit 6,000 officers “by summer” but later said the figure represented its goal for the budget year that ends in September. The push was hampered by a rocky transition to a new IT system that left officials relying on manual workarounds to process recruitments.

Hydrick Thomas, president of American Federation of Government Employees Council 100, the officers’ union, said the agency is staring down the peak summer travel period and “realized they couldn’t hire the 6,000 like they promised to do.”

“People are going to be traveling, they’re going to come to the airport and see these long lines and wonder what’s happening,” he said.

That was Fareeda Ali Bullert’s experience Friday when she arrived at Austin-Bergstrom International Airport for a flight to New York. Bullert said as soon as she entered the terminal, it was clear something was wrong, with large crowds and no direction from TSA workers.

“It was very much passengers helping passengers, sharing how long they were on the wait for,” she said. “The lines were wrapping around and almost crisscrossing.”

After about an hour of waiting - followed by a lot of running - Bullert said she made it to her flight with about five minutes to spare.

“It felt like a game show,” she said. “You had to beat someone to make it your flight.”

In Charlotte, hundreds of people recently missed flights after being stuck in long lines.

The TSA was short at least 2,500 officers heading into June, according to an agency assessment obtained by The Post, with some of the largest airports down more than 100 officers compared to projected staffing needs.

In all, the analysis identified 235 airports that were short-staffed by at least 5 percent and where officers would be eligible for $500 bonuses each month. An agency memo about the three-month program indicates, “we are trying to offer as many incentive options as possible for airports to successfully perform their operations.”

Thomas, the union leader, said the prospect of bonuses is welcome but mandatory overtime shifts will not be as popular with officers.

“It’s kind of stressful,” he said. “It works better when you ask for volunteers rather than try to mandate somebody.”

While the TSA has recruited 3,100 new officers, agency spokeswoman Alexa Lopez said about 2,090 workers have left since the start of the year. Lopez said many of those leaving worked part-time, while a greater proportion of the new hires are full-time employees.

TSA data shows an uptick in traveler numbers in recent weeks. On Memorial Day weekend, more than 1.9 million people passed through security checkpoints on Friday and Monday, the highest figures since demand for air travel plummeted in March 2020 as the coronavirus began to spread widely in the United States. This past weekend saw another day with more than 1.9 million passengers.

In the memo seeking volunteers, LaJoye wrote that he expects those numbers will keep growing: “TSA is experiencing an increase in passenger volumes at checkpoints, and anticipating a significant summer surge in travel, especially considering that the Centers for Disease Control and Prevention has issued new guidance pertaining to the safety of travel for vaccinated persons.”

How the volunteers would be put to use would be up to regional leaders, but the memo suggested they could help manage queues, carry out personnel work or do other jobs that don’t require employees who are certified as security officers.

The memo asked volunteers to come forward by June 1 and be prepared to start their assignments June 4. It wasn’t clear this week how many volunteers the agency received as a result of the memo.

Lopez said the TSA regularly asks for volunteers at busy times such as Memorial Day weekend and around the Christmas and Thanksgiving holidays. She said the assignments help office staff members gain a familiarity with the agency’s core mission.

The agency has long struggled with retaining employees, with officers complaining of low pay and poor morale. The Biden administration has started a process designed to tackle those problems.

Last week, Homeland Security Secretary Alejandro Mayorkas announced steps to strengthen the officers’ union, saying he would approve new collective bargaining rights and provide officers a new system to appeal personnel decisions - protections most other federal employees already have. He also said he supported the desire of officers to be fairly compensated.

The changes, Mayorkas said in a video message, “recognize your contributions, empower you as you deserve and build upon the improvements that your leaders already have accomplished on your behalf.”

Everett Kelley, the national president of AFGE, praised the steps, saying TSA officers’ service during the pandemic underscored their need for better treatment.

“Throughout this pandemic, TSA officers have performed heroically on the front lines, keeping air travel safe for the flying public in spite of low pay and difficult working conditions and even when doing so presented a great risk to their own personal health and safety,” he said.