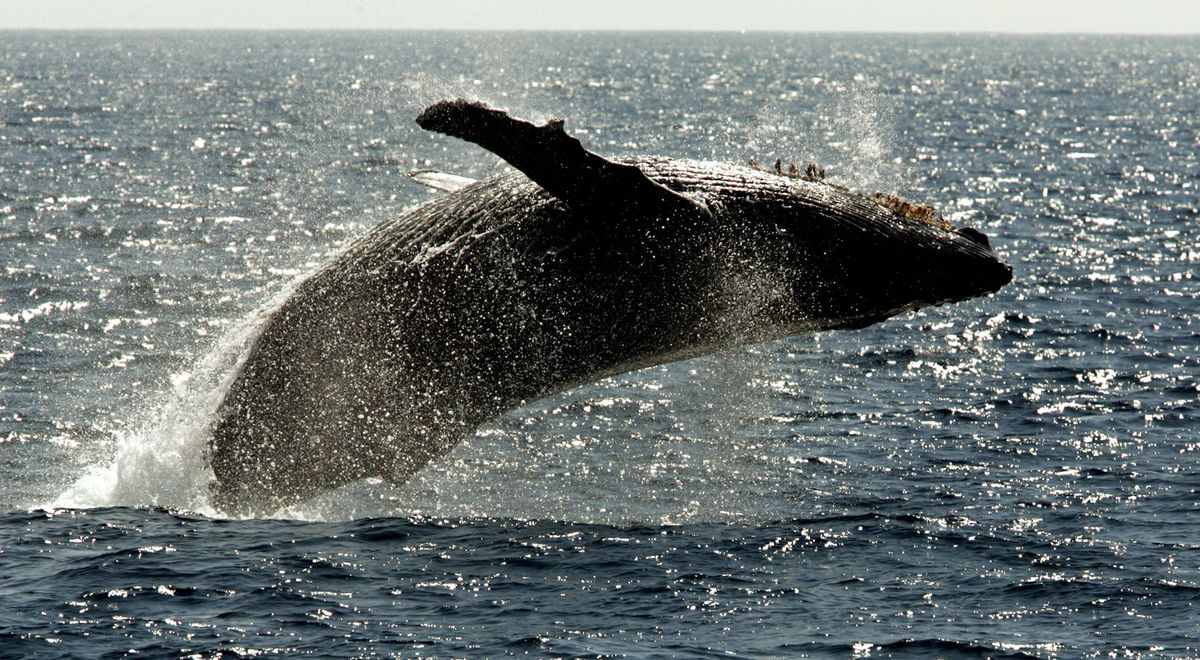 A humpback whale breaches off Lahaina on the island of Maui in Hawaii. (AP Photo/Reed Saxon, file)

A humpback whale breaches off Lahaina on the island of Maui in Hawaii. (AP Photo/Reed Saxon, file)

A humpback whale breaching off the southeast coast of Australia crashed down on top of a small boat, critically injuring an 18-year-old.

Nick Myhill suffered severe head and neck injuries in the freak incident during a fishing outing Sunday in the Tasman Sea, off Narooma, on the southern coast of New South Wales, according to reports.

Myhill remains in a coma, while the 39-year-old skipper, who is the 18-year-old’s stepfather, was treated for facial lacerations and a concussion.

Both were caught off guard by the breaching animal during the height of the humpback migration season in the region, where whale watching is a popular pastime.

“They had no warning, and no time to react,” the family said in a statement to CNN. “Both Nick and Matt were injured.”

Emergency officials with Marine Rescue NSW rushed to the scene after receiving a mayday call from the skipper, identified only as Matt, who scrambled to get them back to shore before the boat sank.

“Matt was able to quickly get them back to shore,” the family statement said, adding that he used a high-frequency marine radio to arrange for an ambulance to meet them upon arrival at the boat ramp, according to CNN.

Paramedics administered aid to both men, who had set out earlier that morning for a fishing trip.

Myhill had to be airlifted to a hospital in Canberra, where he was listed in critical but stable condition, reports said.

“Nick is a strong young man, and he is fighting hard.”

[Skiff crashes into humpback whale near Juneau, leaving some on board with serious injuries]

There is no indication that the whale intentionally attacked the boat, and it may have injured itself in the incident.

Breaching is common among whales and can be a form of communication, said Lucy Babey, an expert on whale behavior and deputy director and head of science and conservation at ORCA, a UK-based charity for aquatic animals, who spoke to CNN.

“It can be its way of saying ‘Don’t come any closer, I’m here’ or it may be scared and jumping out of the way,” she said, according to CNN. “It could also just have been unlucky — the whale happened to be breaching and didn’t know there was a vessel there.”

In a Facebook post, Marine Area Commander Superintendent Joe McNulty warned skippers to keep their distance from whales during the busy migration season.

“The incident demonstrates the dangers these mammals can pose to those on the water,” he wrote. “In recent days, the number of whales migrating north has dramatically increased, and maritime authorities have received reports they’re traveling closer to the coast than in previous years.”