Inflation FAQ: Why it’s rising and whether you should worry 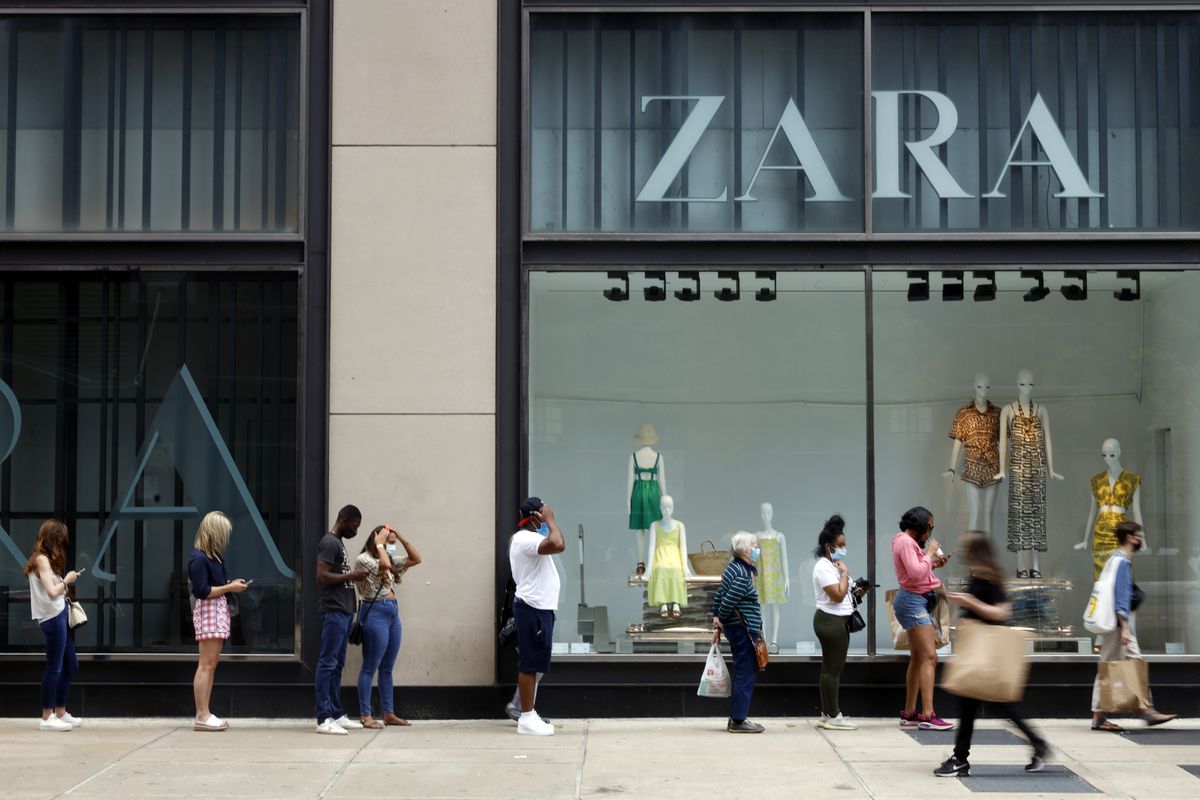 Shoppers wait in line outside a Chicago downtown retail store as others pass by, Wednesday, May 26, 2021. Retailers are seeing an eager return to their stores after months of watching their customers focus on online buying during the pandemic. (AP Photo/Shafkat Anowar)

Shoppers wait in line outside a Chicago downtown retail store as others pass by, Wednesday, May 26, 2021. Retailers are seeing an eager return to their stores after months of watching their customers focus on online buying during the pandemic. (AP Photo/Shafkat Anowar)

Inflation is a fancy way of saying rising prices. Nearly every day prices of food, clothes, tickets and more are moving around as some brands hike prices and others offer discounts. For the past decade, inflation has averaged under 2% a year for the typical American. But suddenly, inflation is rising much faster than that. The latest government data showed 5% a year inflation, triggering fears that the economy is overheating.

Here’s a rundown of what exactly is going on and why some economists, policymakers and business leaders are starting to get worried.

How much is inflation going up and why?

Inflation rose 5% between May 2020 and May 2021, the Labor Department reported Thursday, which was higher than expected and the biggest jump since 2008. A major reason for the spike is the comparison to prices now versus a year ago when much of the country was on lockdown. Consider airlines and hotels. Virtually no one was traveling last spring, causing airlines and hotels to massively scale back services, lay off employees and cut prices. Now that the economy is re-opening and people are traveling again, hotel prices are up 10% versus a year ago and airfares are up 24%.

Economists expect many of these eye-popping price hikes to be short-lived as the economy adjusts and the comparisons to a year ago get less dramatic.

It’s notable that the last time inflation was so high was in 2008 during the Great Recession. Historically, inflation has moved around the most - first moving lower and then spiking - during and just after recessions.

Most of the May inflation spike is coming from parts of the economy that are re-opening (such as travel), or in areas saw unusually high demand during the pandemic but may not persist much longer (like bicycles). That’s why Wall Street, the Biden White House and top economic policymakers at the Federal Reserve still think the situation is under control.

Consider that roughly a third of the May inflation increase was due to soaring used car prices, which are up nearly 30 percent in the past year. It’s a classic story of supply and demand. There has been heavy demand for used cars as people didn’t want to fly or take public transportation. Meanwhile, there’s little supply largely because rental car companies purchased far fewer cars in 2020, so they aren’t selling many now on the used car market.

[Curious Alaska: How is the national shortage of car rentals affecting Alaska?]

Factories will eventually produce more furniture, washers, cars, computer chips, etc. The question facing the economy is how long it will take.

How bad can this get?

If inflation gets too high, the Federal Reserve is likely to have to raise interest rates to try to slow the economy down. Often, that kind of action leads to a recession.

The economy isn’t at that alarming phase yet, but these are big price jumps and this is a highly unusual situation. Coming out of the pandemic is akin to a “lights on” effect where demand for so much stuff comes back at lightning speed. There’s a real possibility it’s too much for the economy to handle.

Former treasury secretary Lawrence H. Summers, a Democrat, put it this way in a recent Washington Post op-ed: “The primary risk to the U.S. economy is overheating — and inflation.”

The big concern is three-fold: One, that Americans start believing price hikes are here to stay. That could have a major drag on the economy if it makes people spend a lot now to try to beat more price hikes and then stop spending later this year or next. Second, the U.S. government injected historic amounts of aid into the economy, which is adding more gas to an already juiced-up economy. Third, wages and rents are starting to rise, and those effects likely won’t be temporary.

Price increases on goods (think: cars and bikes) tend to be short-lived because companies eventually produce more. But price increases on “services” including rent often stick around for years to come, especially if companies bump up wages by several dollars. Businesses often turn around and pass those extra costs on to consumers. Then employees ask for more pay again.

[These businesses found a way around the worker shortage: raising wages to $15 an hour or more]

How concerned should consumers and businesses be about inflation?

Right now, it’s a yellow traffic light situation. People are on alert, but there’s no panic or slamming of brakes.

The key is question is how much inflation won’t be short-lived. That’s why economists and Wall Street traders are closely watching rent and other services for signs of a spike there. Rent is up a modest 1.8% in the past year, but it’s risen 0.2% each month for the past four months. Rent is likely to move even higher this summer as the eviction moratorium expires and landlords adjust to higher home prices and people returning to cities.

Another good indicator is what’s happening with bond rates. Despite the worse-than-expected inflation data, bond yields barely moved Thursday. The interest rate on the 10-year U.S. Treasury Bond is still about 1.5%. Typically, if Wall Street is really worried about inflation, bond yields rise because investors are worried their earnings will get eaten up by inflation, so they demand a higher yield to compensate. But once yields begin to move, it can go quickly.

It’s also notable that inflation expectations are rising in the market, an early sign of caution.

Who wins and who loses when inflation goes up?

The biggest loser when inflation rises is the poor because they spend so much of their income on basic necessities. They don’t have a lot they can cut back on. It’s especially painful is rent, food and transportation all rise at once. Right now, transportation is up 11% from a year ago, while groceries overall are up less than 1%.

Businesses working on fixed contracts also suffer big losses because they cannot pass along the higher prices to their customers. Many small businesses are expressing concern that it is harder for them to adjust prices, for example. Retirees and people with a lot of savings also tend to suffer because inflation makes their money worth less. They can’t buy as much.

The key winner from inflation is anyone who holds debt because it is cheaper to pay back. People who own land and their homes also don’t mind because their costs generally don’t rise as much. Finally, governments tend not to mind some inflation because it debt looks cheaper.

How do government spending and the growing deficit affect inflation?

Higher government spending and higher deficits (when the U.S. government spends more money in a year than it brings in from taxes and fees) tends to drive inflation higher.

Some economists voiced concern when Democrats passed President Biden’s $1.9 trillion relief package in March that it would overheat the economy, leading to higher prices. Biden is also proposing to spend more than $4 trillion on infrastructure, though he would like to offset much of that spending with tax increases that should mute the inflationary effects.

Still, interest rates remain at historic lows. It’s cheap for the U.S. government to borrow money right now and the amount of money coming out of the annual U.S. federal budget to re-pay the debt is very low. This is why many economists are encouraging the Biden administration to make strategic investments in infrastructure, education and research, though there is debate about how big to go.

What do experts and policymakers say about the rise?

Treasury Secretary Janet Yellen raised some eyebrows over the weekend when she said she expects inflation to hit 3% this year. That’s higher than some were predicting, but she was quick to clarify she thinks it will come down after that, stressing, “I personally believe that this represents transitory factors.”

Senate Republican leader Mitch McConnell put it this way: “The latest data reinforce what too many Americans have been experiencing firsthand: the Biden administration’s partisan spending bill has blunted our nation’s economic recovery.”

The Federal Reserve has a target of 2% inflation a year, but Fed leader Jerome H. Powell has been clear that after years of running below target, he would like to see inflation run a bit higher than 2% for awhile. But many wonder if inflation does stay above 3% for several months whether the Fed will have to act.

“The [Fed’s] inflation-dismissal message is becoming more and more difficult to sell to market participants,” wrote Lindsey Piegza, chief economist at investment firm Stifel. “Furthermore, for the average American, suffering the effects of higher prices on everything from cereal and eggs to autos and lumber, another six to 12 months of elevated inflation will prove extremely painful.”