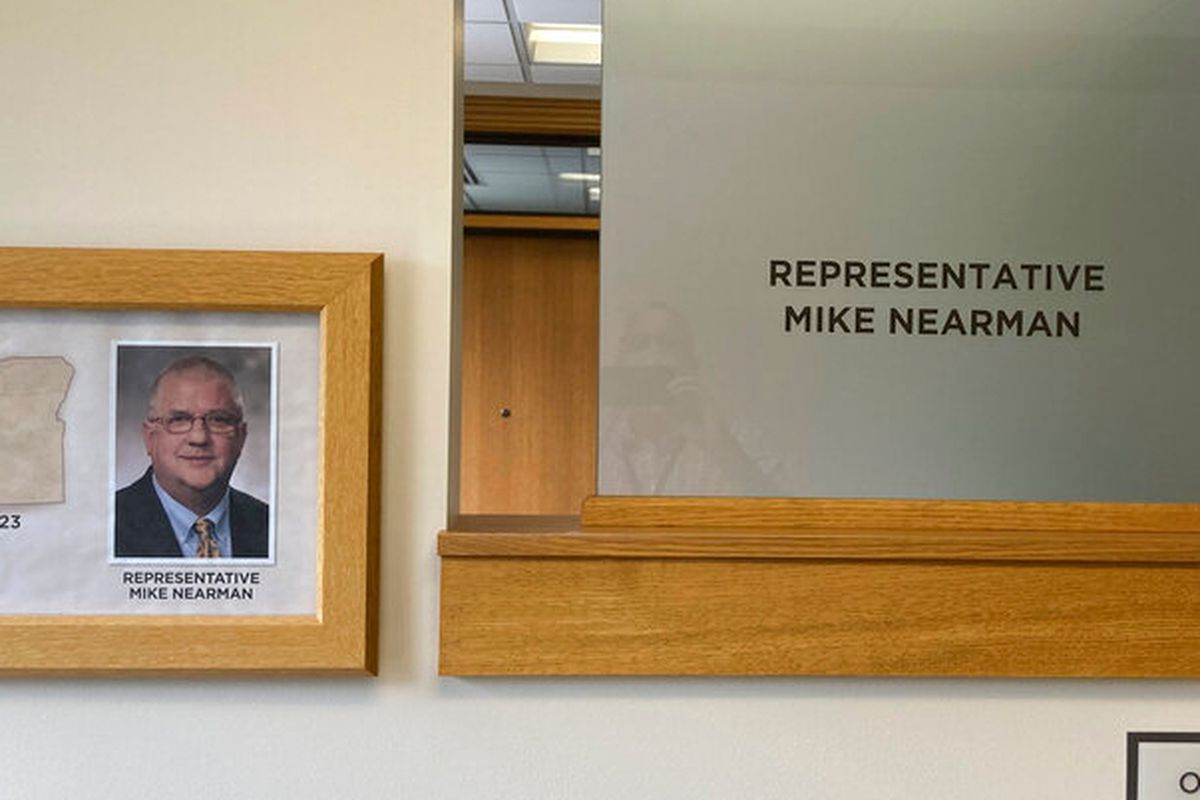 The office of Oregon Rep. Mike Nearman, is seen on Monday, June 7, 2021, in the Oregon State Capitol in Salem, Ore., before his expulsion. (AP Photo/Andrew Selsky)

The office of Oregon Rep. Mike Nearman, is seen on Monday, June 7, 2021, in the Oregon State Capitol in Salem, Ore., before his expulsion. (AP Photo/Andrew Selsky)

The Oregon House voted 59-1 Thursday to expel Rep. Mike Nearman, the first time it has ejected a sitting representative.

Lawmakers removed Nearman because he let far-right demonstrators, some of whom were armed, into the Capitol on Dec. 21 while lawmakers were holding a special session. The Capitol was closed to the public due to the pandemic and remains so.

That means his seat representing a rural district west of Salem will likely sit vacant for the remainder of the legislative session, which must wrap up by June 27.

In late December, Oregon’s coronavirus case outbreak was at a near-high, with more than 1,100 new cases being reported each day and widespread availability of the vaccine still months away.

People who wanted to follow or influence legislative action could watch every committee meeting or floor session online and testify to committees via phone or video without having to drive to Salem.

Surveillance video captured Nearman, a four-term Republican, opening a door and exiting the building, stepping aside so that demonstrators waiting at the entrance could quickly slip into the building. The demonstrators clashed with police who attempted to expel them from the building and allegedly sprayed police with bear mace.

Last week, a video from earlier in December surfaced which showed Nearman instructing viewers how they should wait outside an entrance to the Capitol and text his cell phone. Then, “somebody might exit that door while you’re standing there,” Nearman said, a plan he dubbed “Operation Hall Pass.”

In an interview Monday with a conservative radio host, Nearman said the group he instructed on how to text him when they arrived outside a door at the Capitol were “mostly blue-haired old ladies.”

That did not accurately describe the group that showed up at the Capitol and entered the door Nearman opened. Rather, the demonstrators included the right-wing, Vancouver-based group Patriot Prayer known for street brawls, people wearing clothing with Three Percenters militia logos and a Confederate flag hat and people armed with rifles and wearing military gear.

Nearman already faces criminal misconduct charges for the incident and in a committee hearing on the expulsion proposal earlier Thursday, he declined to answer questions on the advice of his attorney. However, he said it was against the state Constitution to close the building to the public and it was “a place they had a right to be, a place the legislative assembly had no right to exclude them from.”

Democrats gave Nearman unlimited time to speak during the House floor debate on the resolution to remove him. But Nearman, the lone “no” vote against his removal, kept his comments brief and reiterated that “the citizens of Oregon should be able to instruct their legislators” and industry and interest groups should have in-person access to lobby lawmakers.

The 22 other House Republicans, all of whom voted to expel Nearman, remained silent during the floor debate. However, the top leaders of the caucus discussed Nearman’s actions earlier in the day.

House Republican Leader Christine Drazan, of Canby, said on the public radio show Think Out Loud that the demonstrators’ incursion could easily have turned deadly.

“(Nearman) made a decision to intentionally come up with a plan to let people into the building (when) he did not know how that would turn out and he was comfortable with that,” Drazan said. “I am not comfortable with that. There could easily have been a death on that day.”

In the committee hearing Thursday, Rep. Daniel Bonham, a Republican from The Dalles and the deputy House Republican leader, said Nearman exercised “terrible judgment” when he opened the door to demonstrators that morning.

“I saw the people outside,” Bonham said. “Nobody should have opened the door to the people that were here that day.”

Bonham said many lawmakers’ constituents are frustrated at the extended closure of the Capitol due to the pandemic, or that it was ever closed at all, and “When Mike Nearman says that he wanted to let people into the building to engage in the process, I believe that’s what he wanted to do.”

However, Bonham said, “There was a great error in judgment that day.”

Bonham said he has “called for a lawful response to unlawful acts every time I’ve seen them,” including when left-wing protesters and self-proclaimed anarchists frequently rioted, looted and destroyed property in Portland over the last year, and he expressed disappointment that many people who condemned Nearman’s actions did not similarly speak out against lawlessness in Portland.

A handful of Democrats spoke in support of Nearman’s removal, although most of the 37-member caucus remained silent. Rep. Andrea Salinas, of Lake Oswego, recounted the work lawmakers were at the Capitol to do on Dec. 21, including approving aid for tenants and landlords and passing more funding for the state’s responses to the pandemic and Labor Day wildfires. “He put all of this work at risk,” Salinas said. “The trauma of that day will not leave with Rep. Nearman, especially for (Black, Indigenous and people of color) legislators and the staff in the Capitol.”

Rep. Julie Fahey of Eugene said she watched the demonstrators from her office window throughout the day and early on, they chanted things like “enemies of the state,” “traitors” and “we hate you.”

Rep. Anna Williams, a Democrat from Hood River, did not speak on Thursday but described the scene in a tweet earlier this week.

“On December 21st, a man with a bullhorn was standing below my office window shouting, ‘We’re coming for you!’ as a group of people carrying semi-automatic weapons was looking into my and my colleagues’ office windows,” Williams wrote. “Rep. Mike Nearman invited them into the Capitol.”

House Speaker Tina Kotek, D- Portland, called for Nearman to resign months ago but did not speak during House floor debate on his expulsion. In a statement after the vote, she said “elected leaders must be held to the highest possible standard.

“The facts are clear that Mr. Nearman unapologetically coordinated and planned a breach of the Oregon state Capitol,” Kotek said. “His actions were blatant and deliberate, and he has shown no remorse for jeopardizing the safety of every person in the Capitol that day. Given the extraordinary circumstances, this was the only reasonable path forward.”

“The expulsion of a member for disorderly conduct is an extraordinary vote that changes the chamber, the Legislature and our state,” Drazan said. “Rep. Nearman took credit for his principles without taking responsibility for the consequences of his actions. His plan to let people into the Capitol ended with violence, property destruction and injured cops. This disregard for the rule of law leads us deeper into civil unrest and division. If we want to turn our state around we must hold ourselves accountable to a higher standard as we work to lead and serve the greater good.”