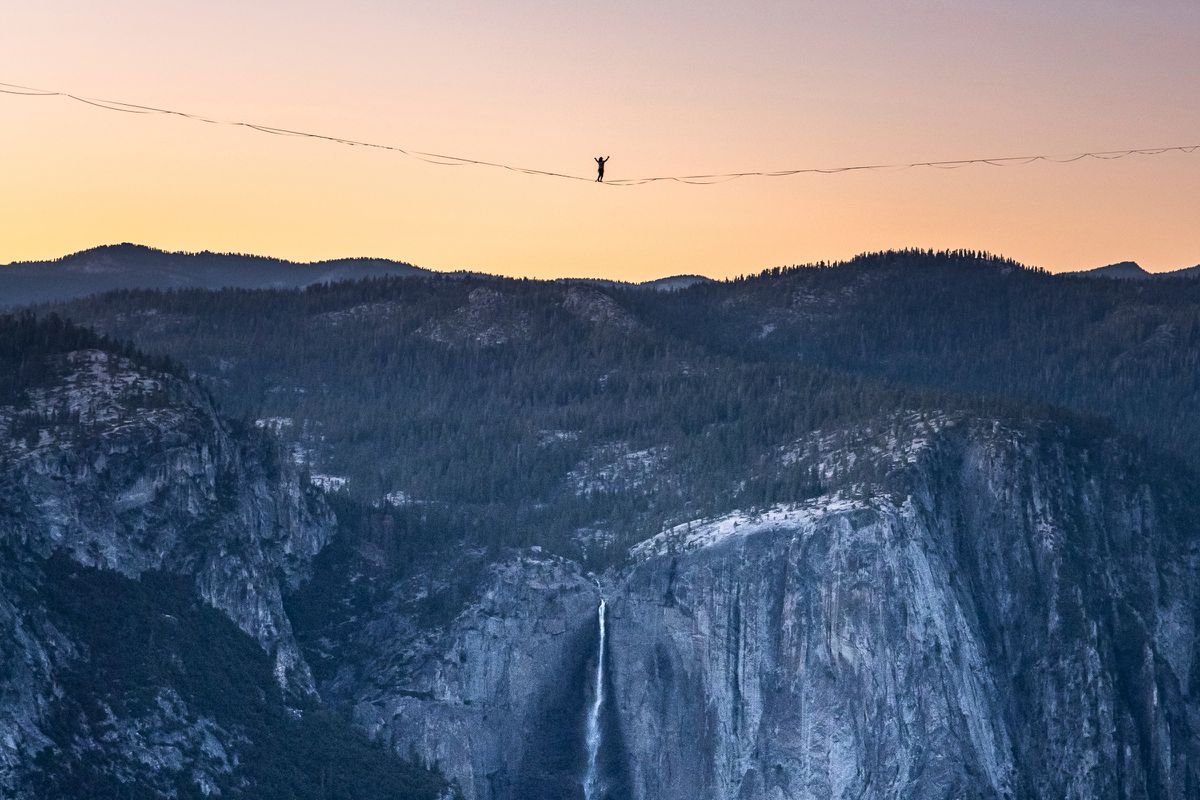 SAN FRANCISCO — Two brothers from San Francisco say they have set a record for the longest highline ever walked in both Yosemite National Park and California.

Earlier this month, they and a group of friends spent nearly a week stringing a single, 2,800-foot line from Taft Point west across a series of gulleys that plunge up to 1,600 feet.

Moises and Daniel Monterrubio, brothers who are training to be rope-access technicians, had been thinking about crossing that void for a year.

“Every time we’d go out there, we’d think about that line,” Moises Monterrubio, 26, told the San Francisco Chronicle.

Highlining is high-altitude slacklining, in which a narrow strip of strong, nylon webbing — usually an inch wide and a few millimeters thick — is strung between two anchor points and serves as a kind of balance beam.

Completing a line means carefully heel-toeing from one end to the other while wearing a waist-harness that links to a 3-inch steel ring around the webbing. In a fall, walkers remain attached, but they have to haul themselves back up to balance or shimmy back to an anchor point while dangling upside down.

The sport in the past decade has flourished into a culture of athletes, gear brands and sponsorships.

Over the course of six days earlier this month, the Monterrubios used the help of 18 friends and fellow highliners to navigate their webbing through and across the landscape — hiking lines up from the valley floor, rappelling down from the cliffs above and maneuvering through countless tree branches.

Eventually, they had their anchors: a set of granite boulders at Taft Point and an old, thick tree trunk at the other outcropping.

“It was pretty intense and dangerous. But we made it happen,” Monterrubio said.

The group received permission from national park staffers in advance, he said.

The longest line walked in Yosemite had been a 954-footer extending from Taft Point to an anchor east. The new line was almost three times that length.

It all came together at sunset June 10: The line was set, the brothers were ready and the honor was theirs.

Daniel, 23, walked the line first and fell three or four times in the wind but made it across. Then Moises, also falling twice but catching himself on the line above the craggy landscape.

Friends took turns on the line for four days afterward, most of them falling as well. The pride of a highliner is to conquer a line without slipping off.

Eventually, Moises walked the line in 37 minutes without a fall. So did fellow highliner Eugen Cepoi, Moises’ mentor.

“The most rewarding part was seeing all my friends at the anchor excited about just having it done,” Moises said. “I value that more than crossing.”