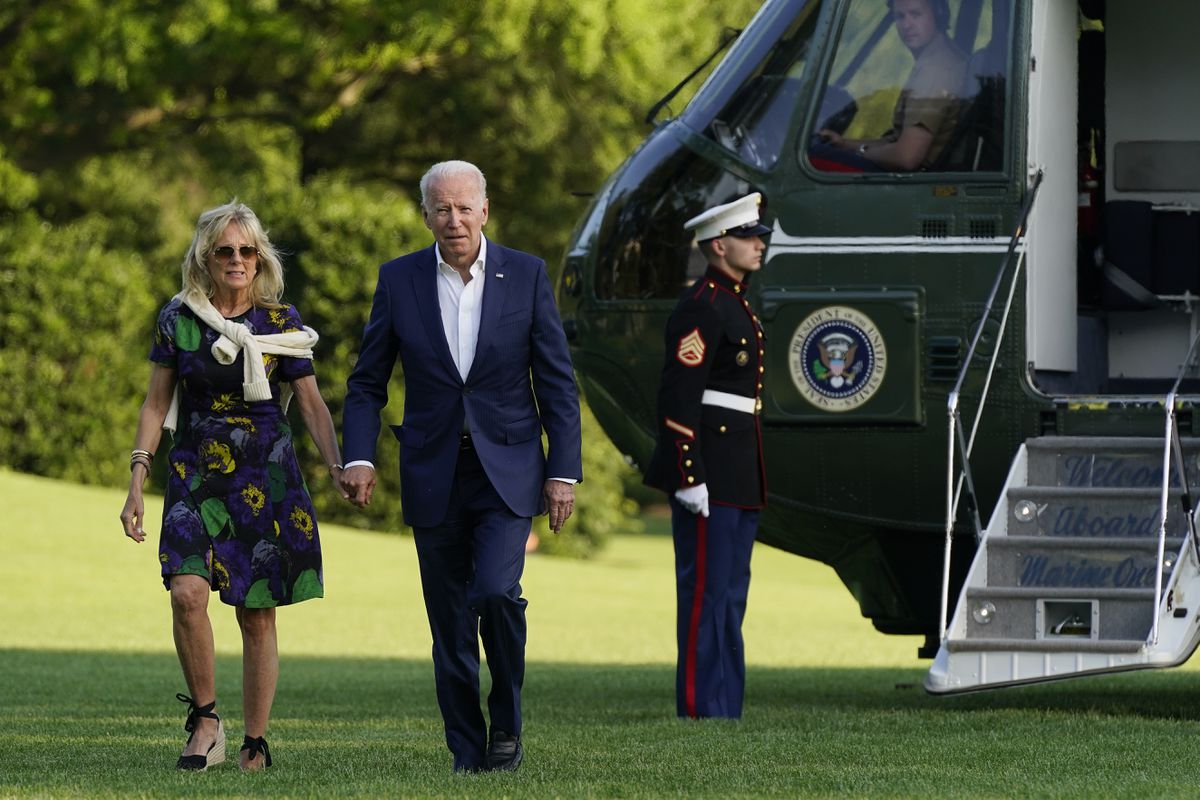 President Joe Biden and first lady Jill Biden walk on the South Lawn of the White House after stepping off Marine One, Sunday, June 27, 2021, in Washington. (AP Photo/Patrick Semansky)

President Joe Biden and first lady Jill Biden walk on the South Lawn of the White House after stepping off Marine One, Sunday, June 27, 2021, in Washington. (AP Photo/Patrick Semansky)

WASHINGTON — The U.S. military, under the direction of President Joe Biden, has conducted airstrikes against what it said were “facilities used by Iran-backed militia groups” near the border between Iraq and Syria.

Kirby said the U.S. military targeted three operational and weapons storage facilities Sunday — two in Syria and one in Iraq.

He described the airstrikes as “defensive,” saying they were launched in response to the attacks by militias.

“The United States took necessary, appropriate, and deliberate action designed to limit the risk of escalation — but also to send a clear and unambiguous deterrent message,” Kirby said.

The Pentagon said the facilities were used by Iran-backed militia factions, including Kata’ib Hezbollah and Kata’ib Sayyid al-Shuhada.

Two Iraqi militia officials told The Associated Press in Baghdad that four militiamen were killed in the airstrikes near the border with Syria. Both officials spoke on condition of anonymity because they were not authorized to give official statements. They said the first strike hit a weapons storage facility inside Syrian territory, where the militiamen were killed. The second strike hit the border strip.

The Syrian Observatory for Human Rights, a Britain-based group that closely monitors the Syrian conflict through activists on the ground, reported that at least five Iraqi militiamen were killed in the airstrikes.

The Iran-backed Iraqi factions vowed revenge for the attack and would continue to target U.S. forces, in a joint statement.

“We... will avenge the blood of our righteous martyrs against the perpetrators of this heinous crime and with God’s help we will make the enemy taste the bitterness of revenge,” the statement said.

Sunday’s strikes mark the second time the Biden administration has taken military action in the region. In February, the U.S. launched airstrikes against facilities in Syria, near the Iraqi border, that it said were used by Iranian-backed militia groups.

The Pentagon said those strikes were retaliation for a rocket attack in Iraq in February that killed one civilian contractor and wounded a U.S. service member and other coalition troops.

At that time, Biden said Iran should view his decision to authorize U.S. airstrikes in Syria as a warning that it can expect consequences for its support of militia groups that threaten U.S. interests or personnel.

“You can’t act with impunity. Be careful,” Biden said when a reporter asked what message he had intended to send.

On Sunday, Kirby said Biden “has been clear that he will act to protect U.S. personnel. Given the ongoing series of attacks by Iran-backed groups targeting U.S. interests in Iraq, the President directed further military action to disrupt and deter such attacks.”

The Pentagon spokesman added: “As a matter of international law, the United States acted pursuant to its right of self-defense. The strikes were both necessary to address the threat and appropriately limited in scope.”

House Speaker Nancy Pelosi said in a statement Sunday that the U.S. airstrikes “appear to be a targeted and proportional response to a serious and specific threat,” adding, “Protecting the military heroes who defend our freedoms is a sacred priority.”