Massive and mysterious, a 100-pound fish washed ashore in Oregon. Scientists hope to learn its secrets. 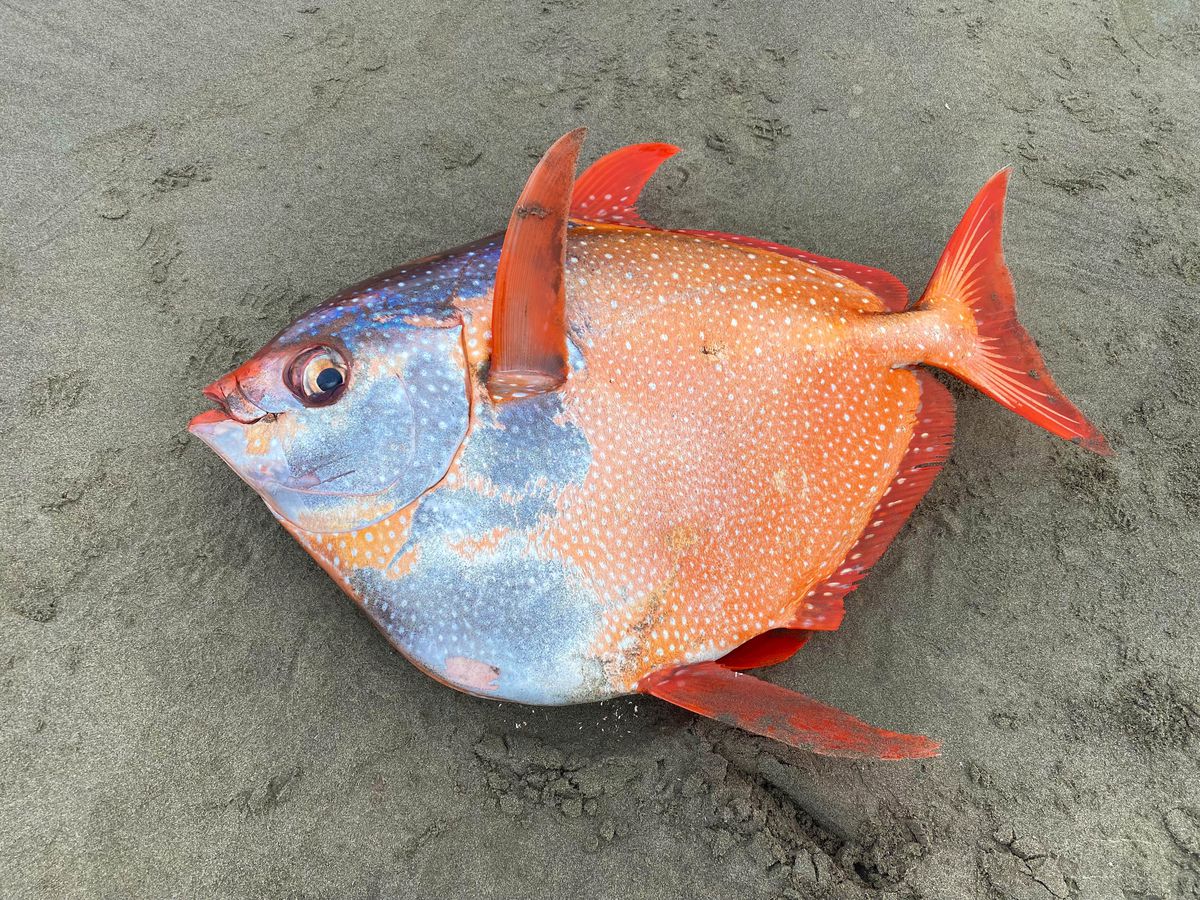 Officials at Seaside Aquarium were alerted early Wednesday to a rare scene on the sands of the northern Oregon coast: A large, round, glistening opah weighing 100 pounds had stranded ashore.

The fish was 3 1/2-feet long - its huge body a mix of silvery and bright reddish-orange scales, dotted with white spots. Its large eyes feature hints of gold. Tiffany Boothe, assistant manager at the aquarium in the small beach community of Seaside, said it’s the first opah fish she has seen on area beaches.

Boothe said it was not clear how this fish died, but she noted that it was in “great condition, meaning it was close to shore when it died.”

The unusual-looking fish caused “quite the stir,” the Seaside Aquarium posted on Facebook on the day of the recovery. Boothe said officials at the aquarium called as many people as they could to come see the fish, and they offered a glimpse to aquarium visitors, too.

Heidi Dewar, a research biologist with National Oceanic and Atmospheric Administration (NOAA) Fisheries, said that although strandings are unusual, this one is even more so. “I wouldn’t expect an opah that size to normally be off Oregon,” she said.

The changing climate may also play a role.

“We are seeing some marine organisms moving northward as ocean temperatures increase,” Dewar said, noting that without robust data, it’s hard to say what would cause an opah stranding.

She said there are some opah off the California coast.

The fish are “certainly in close proximity to Oregon, so it’s not super surprising,” Dewar said. “It’s not like it’s a fish from the Southern Hemisphere.”

Opah, also called moonfish, can grow more than six feet long and more than 600 pounds, according to the aquarium. NOAA says the fish are found in tropical and temperate waters, including the Pacific islands and the United States’ West Coast, Southeast, New England and Mid-Atlantic regions.

According to the agency, much remains unknown about the fish, including its average life span: “Little research on the basic biology and ecology of opah has been conducted.” Dewar said biologists are still developing methods to determine how old the opah are.

In 2015, NOAA researchers reported in a paper published in the journal Science that the opah is the only known fully warm-blooded fish. The deepwater predatory fish has blood vessels in its gills that allow it to circulate warm blood throughout its body.

“Not a lot is known about these beautiful fish, so anything we can learn will be beneficial,” Boothe said.

The opah that washed up in Oregon last week will be frozen until later this year, when the aquarium says students will get a chance to dissect the fish, with help from the Columbia River Maritime Museum.

After dissecting the opah, samples will be studied further.

Dewar said a lot can be learned from the fish. The contents of the stomach can help determine what the fish forage on; its tissue can reveal where the fish lives as well as what they eat.

Boothe said the aquarium will try to save the opah skeleton and put it on display.

“This will also give students the unique experience of dissecting a really cool fish that they may never come across again in their day-to-day lives,” Boothe said.