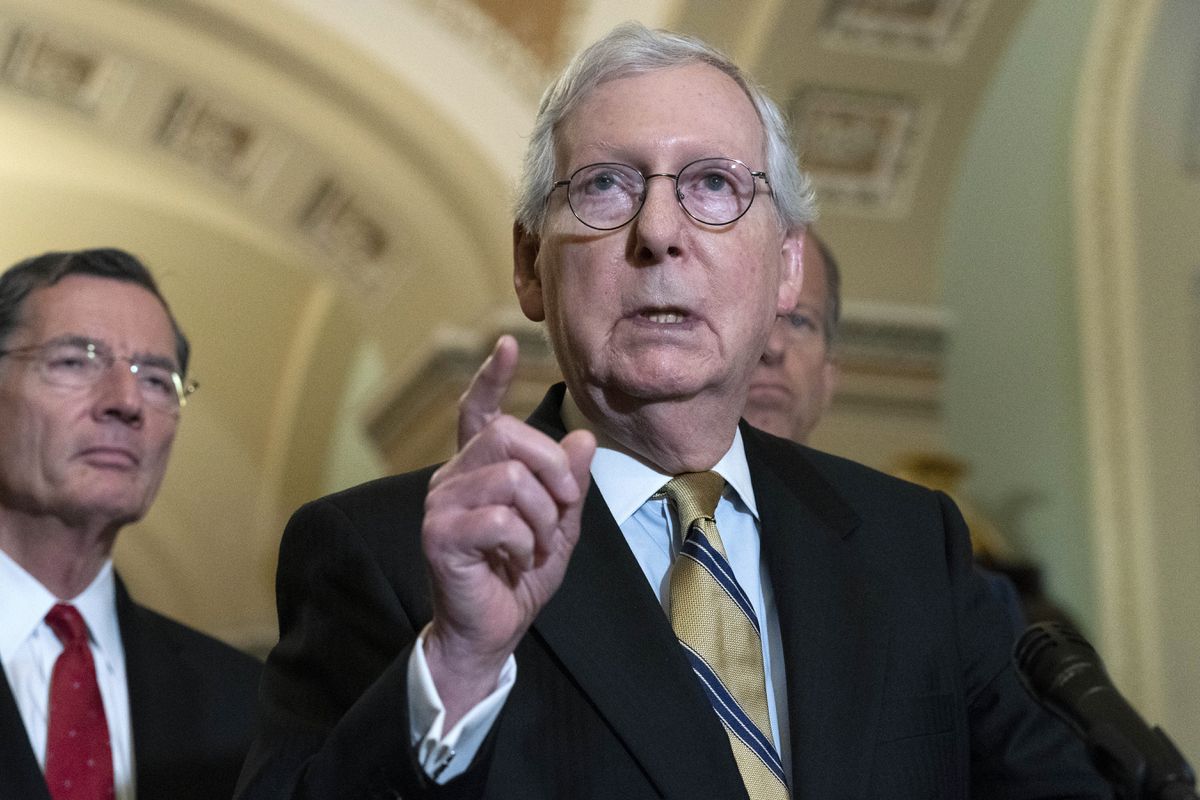 WASHINGTON - A growing number of top Republicans are urging GOP supporters to get vaccinated as the delta coronavirus variant surges across the United States, marking a notable shift away from the anti-vaccine conspiracy theorizing that has gripped much of the party in opposition to the Biden administration’s efforts to combat the virus.

Senate Minority Leader Mitch McConnell, R-Ky., was part of the rising chorus on Tuesday, stressing the need for unvaccinated Americans to receive coronavirus shots and warning that the country could reverse its progress in moving on from the pandemic.

“These shots need to get in everybody’s arm as rapidly as possible, or we’re going to be back in a situation in the fall that we don’t yearn for, that we went through last year,” McConnell said during his weekly news conference. “I want to encourage everybody to do that and to ignore all of these other voices that are giving demonstrably bad advice.”

The remarks from McConnell followed comments in recent days from other top Republicans and from conservative voices urging people to get vaccinated, even as other members of the GOP continue to sound notes of skepticism and spread misinformation about the safety and efficacy of the vaccines.

Among the most notable voices was Rep. Steve Scalise of Louisiana, the No. 2 Republican in House leadership, who received his first dose of the Pfizer vaccine over the weekend and urged others to follow suit. Scalise had long resisted vaccination, claiming protection from antibodies and saying earlier this year that he wanted to ensure his constituents had a chance to be vaccinated first.

In an interview Tuesday, Scalise said “there shouldn’t be any hesitancy over whether or not it’s safe and effective.” He said he was compelled to get the shot in light of the recent spread of the delta variant and the associated spike in cases - and that politics was not a consideration.

“I just felt the time was right to do it,” he said. “I’m happy that I got the vaccine, and I’ve always had high confidence in the process that was used to develop it.”

And on the airwaves, some Fox News hosts who have helped amplify skepticism about the vaccines’ efficacy and slammed the idea of vaccination mandates by businesses are now pushing their viewers to get vaccinated immediately.

“I can’t say it enough. Enough people have died. We don’t need any more death,” Sean Hannity, who previously called the virus a hoax, said Monday on his broadcast. “And it absolutely makes sense for many Americans to get vaccinated. I believe in science. I believe in the science of vaccination.”

The shift comes as the delta variant continues to spread indiscriminately across the United States, sending thousands who remain unvaccinated to hospitals. In an effort to prevent another wave, Republicans are becoming louder in their calls to get supporters vaccinated after months of resistance.

A survey of all 535 members of Congress by CNN found that in May, 100 percent of Democrats from both chambers were fully vaccinated, while only 44.8% of House Republicans and 92% of Republican senators could claim the same. Democrats say the lag in vaccinations among conservatives has been holding them back in easing restrictions on Capitol Hill.

However, Democrats face their own challenges with the virus. Six Texas Democrats who fled to the District of Columbia, to avoid giving Texas Republicans a quorum to pass a controversial voting rights bill tested positive for the coronavirus, apparently leading to a fully vaccinated senior spokesperson in House Speaker Nancy Pelosi’s office to also be diagnosed with the virus.

Separately, Rep. Vern Buchanan, R-Fla., announced on Monday that he had been reinfected even though he was also fully vaccinated.

In light of the delta variant’s potency, the GOP Doctors Caucus - Republican members of Congress with medical and health-care provider backgrounds - plan to recirculate a pair of public service announcements encouraging voters to get vaccinated that members in the Senate and the House recorded earlier this year, according to a person familiar with the plans. More outreach is likely to come soon, Republicans said.

“I got it, my parents got it, my sister who is immunocompromised got it . . . so it’s a personal decision,” said Rep. Ronny Jackson, R-Texas, a former White House physician. “The Doctors Caucus in general is supportive of the vaccine and trying to promote the vaccine. I’m also not an anti-vaxxer.”

Rep. Elise Stefanik, R-N.Y., the No. 3 House GOP leader, encouraged her constituents to get vaccinated last week after a meeting with local business leaders in her district. She said increasing vaccination rates was key to the economic recovery, before directing her constituents to local pharmacies for shots.

“I’m very proud of our counties with very strong vaccination rates, particularly among our seniors, who are the most vulnerable, and we want to encourage those to seek vaccinations,” she said. “It’s available in your community and you can go to your local pharmacy in most cases.”

Some Republicans continue to send a different set of messages, however. Rep. Marjorie Taylor Greene, R-Ga.,was temporarily suspended from Twitter on Monday for violating its covid-19 misinformation policy after she falsely claimed the coronavirus was “not dangerous for non-obese people and those under 65.” She also previously equated the Biden administration’s push for more coronavirus vaccinations to efforts of Nazi-era “medical brown shirts.”

In a news conference Tuesday, Greene - who declined to say whether she has been vaccinated - continued to propagate misinformation about vaccine-related deaths and side effects, and refused to encourage her constituents to get vaccinated.

“I believe in people’s own individual responsibility to read, to find out and to make their own decision,” Greene said. “I don’t worship science, or think that science rules everything - I believe that God rules everything.”

Republicans on Capitol Hill have largely deflected when asked whether members of their party, including former president Donald Trump, were to blame for not being more proactive in informing their supporters about the efficacy of vaccinations.

For the past several months, Republicans on Capitol Hill have largely kept their coronavirus warnings centered on undocumented immigrants crossing the border and bringing the infection with them, as well as accusing China of creating the virus in a Wuhan lab.

Many Republicans have characterized vaccinations as a matter of freedom of choice.

“I’ve been pressing for transparency in government so that people have as much information as possible before they make that choice, and no one should be pressured, coerced, or fear reprisal for refusing any medical treatment, including the covid vaccine,” said Rep. Ron Johnson, R-Wis., who has not been vaccinated, on Newsmax on Tuesday.

For others, the messaging is more urgent - stressing that vaccinations are in the best interest of everyone.

Republican Rep. Gus Bilirakis from Florida - one of the leading states in new coronavirus cases - recently saw the Vaccine INFO Act, legislation he co-authored, pass the House Energy and Commerce health subcommittee. The bipartisan bill would push the importance of continuing to educate health-care workers about how vaccinations can stop the spread of diseases in nursing homes.

“I urge people to get the vaccine. You know I’m not a mandate person, but I think that they need to do their own research and look at the evidence in science from credible institutions,” Bilirakis said. “Leadership is taking positions on it, saying that they - I don’t want to speak for them - but I know there are a couple of members of leadership, specifically who said that they were vaccinated and I think it’s the right thing to do.”