U.S. extends restrictions on border through Aug. 21 even as Canada eases entry 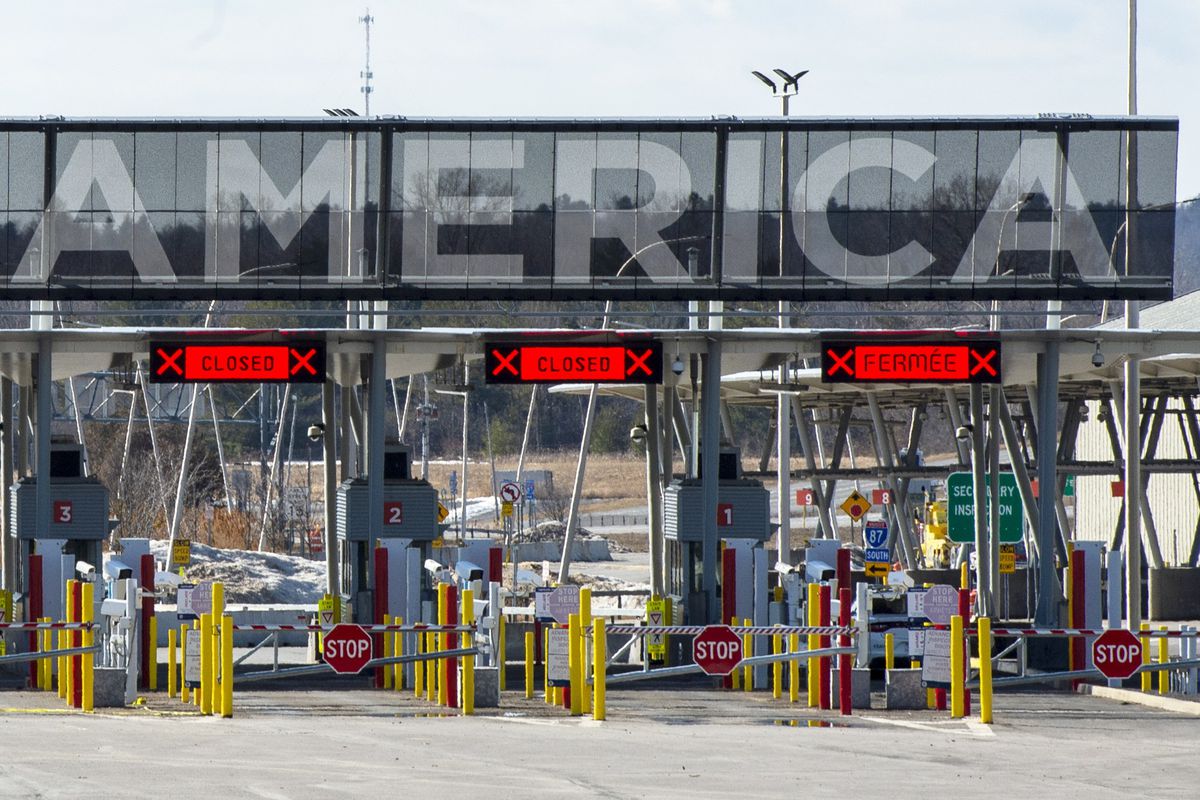 Several lanes at the United States border crossing in Lacolle, Quebec, is closed, Wednesday, March 18, 2020. The Canada-U.S. border will be closed to non-essential traffic in both directions "by mutual consent," President Donald Trump confirmed Wednesday, as efforts across the continent to contain the widening COVID-19 pandemic continued to upend daily life in North America. (Ryan Remiorz/The Canadian Press via AP)

Several lanes at the United States border crossing in Lacolle, Quebec, is closed, Wednesday, March 18, 2020. The Canada-U.S. border will be closed to non-essential traffic in both directions "by mutual consent," President Donald Trump confirmed Wednesday, as efforts across the continent to contain the widening COVID-19 pandemic continued to upend daily life in North America. (Ryan Remiorz/The Canadian Press via AP)

TORONTO - The United States on Wednesday renewed its pandemic curbs on nonessential travel at the U.S.-Canada land border for at least a month, marking a split with its northern neighbor and close ally on the restrictions, and fueling rancor on both sides of the frontier.

The Department of Homeland Security said in a tweet that the extension of the measures, which also apply at the U.S.-Mexico land border - set to expire Aug. 21 - was motivated in part by a desire to decrease the spread of the highly transmissible delta coronavirus variant.

“DHS is in constant contact with Canadian and Mexican counterparts to identify the conditions under which restrictions may be eased safely and sustainably,” the agency said.

The announcement comes several days after Canada said it would begin to open up its borders to some foreigners for discretionary travel, beginning with fully vaccinated U.S. citizens and permanent residents living in the United States on Aug. 9; and fully vaccinated people from elsewhere on Sept. 7.

Canada and the United States agreed to impose the curbs on nonessential travel at their 5,500-mile land border at the pandemic’s onset in March 2020, renewing them in one-month increments since.

The measures have had limited effects on trade and the movement of some cross-border workers, but they have kept families apart, battered the tourism industry and altered life in close-knit border communities in ways big and small - and that some analysts fear could be more permanent.

[Canada to open border to fully vaccinated US citizens on Aug. 9. You’ll have to take a few steps before you get there.]

Canadian officials have often pointed to their work with U.S. counterparts on the restrictions as evidence of robust cooperation between the traditionally close allies, even as those bonds were tested when Donald Trump was president.

There has always been some asymmetry to the border measures. Canadians have been able to fly to the United States for nonessential purposes, while Canada has kept its air, land and marine borders shut to tourists.

In recent months, lawmakers, business groups, cross-border mayors and some travelers have prevailed upon Canadian Prime Minister Justin Trudeau to ease the restrictions, arguing that he was taking a far-too-cautious approach. Some had called on President Biden to act unilaterally and lift the measures.

Now, it’s Canada that is going one way, acting unilaterally to roll back some of the curbs, while the United States is keeping them in place.

Rep. Brian Higgins, D-N.Y., a co-chair of the congressional Northern Border Caucus, said he was “infuriated” by the administration’s decision, which he described as “illogical given the success of vaccines and counterproductive.”

Rep. Suzan DelBene, D-Wash., said the extension of the measures was “shortsighted” and left her “deeply disappointed.”

“Right now, Canadians can fly from Vancouver to Seattle but residents in the border town of White Rock cannot drive the short distance south across the border to Blaine,” she said. “Instead of helping them build back better, we’re putting our border communities at a significant disadvantage.”

On the opposite side of the border, the Canadian Chamber of Commerce expressed exasperation. Perrin Beatty, the group’s chief executive, said Canada’s higher vaccination rates and lower infection rates make it hard to argue that fully vaccinated Canadians pose a public health threat to the United States.

Seventy percent of people in Canada have received at least one dose of a coronavirus vaccine and 52% are fully vaccinated, compared with 56% and 48% in the United States, respectively, according to Oxford University’s Our World in Data.

Beatty also pointed to a road map for a renewed U.S.-Canada relationship from February that said Trudeau and Biden “agreed to take a coordinated approach” when considering whether to ease border restrictions going forward.

“Less than five months later, Washington appears to have lost its copy,” he said.