What would Ronald Reagan think? 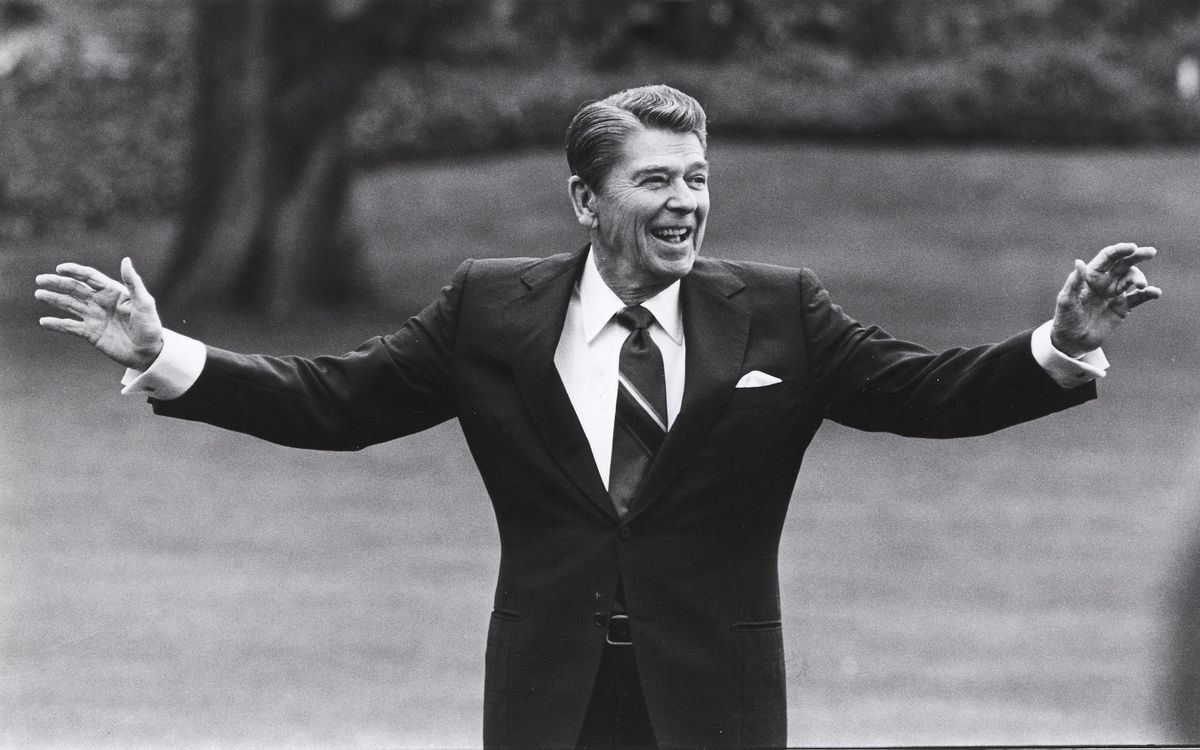 Former U.S. President Ronald Reagan on the south lawn of the White House on April 25, 1986, before departing for a summit in Tokyo. (REUTERS/Joe Marquette)

Former U.S. President Ronald Reagan on the south lawn of the White House on April 25, 1986, before departing for a summit in Tokyo. (REUTERS/Joe Marquette)

The presidential nominee quoted Franklin D. Roosevelt and Thomas Paine, the most radical of the Founding Fathers. He asked all Americans for their support. "More than anything else," he said, "I want my candidacy to unify our country; to renew the American spirit and sense of purpose. I want to carry our message to every American, regardless of party affiliation, who is a member of this community of shared values."

This was Ronald Reagan, accepting the nomination of the Republican Party on July 17, 1980, at Joe Louis Arena in Detroit with a speech that in tone and much of the substance was the resonant opposite of the dark vision that Donald Trump presented in Cleveland. Reagan wanted to govern. He believed as firmly as Trump does now that the Democratic administration then in power had failed the American people, but he also realized he needed the support of many Democrats and independents – not just to win but to have a successful presidency.

Beyond tactical calculation, Reagan had an in-bred distaste for the politics of derogation that have become a Trump hallmark. Reagan would have been appalled by Trump's description of opponents as "Lying Ted" or "Crooked Hillary." I covered Reagan's two campaigns for governor of California and his four presidential campaigns, and interviewed him for books. I could count on the fingers of one hand the number of times he engaged in personal put-downs.

When he did, he regretted it and sought to make amends. Early in his governorship, Reagan blamed several state problems on his predecessor, Pat Brown. An aide told Reagan it was beneath him to put down Brown, whom he'd defeated by nearly a million votes. Reagan agreed and never did it again. Brown told me that when he was in Washington after Reagan became president, Reagan heard he was in town and invited him to the White House where they reminisced for nearly an hour.

In 1980, Reagan ran against President Jimmy Carter. The toughest assertion in Reagan's acceptance speech, not really all that harsh, was a claim that "the Carter administration lives in the world of make-believe" on foreign policy. Reagan made it less personal by adding the word "administration." That was typical Reagan, whose usual targets were "Washington" or an anonymous "they" who were in various ways ruining our lives.

"Politics ain't beanbag," as Finley Peter Dunne's fictional Mr. Dooley famously declared, and there were personal attacks aplenty in the 1980 campaign. Most of them came from Carter, who told a partisan audience, "You'll determine whether or not this America will be unified or, if I lose this election, whether Americans might be separated, black from white, Jew from Christian, North from South, rural from urban." Reagan publicly said he was "saddened" by these words. I was with Reagan that day, and he said privately that he was surprised at Carter's language and thought it showed that the president knew he was losing.

Reagan, who was winning, kept mostly to the high road, with occasional lapses. When someone told him that Carter had been quoted as saying he liked cold showers, Reagan quipped that a man who claimed to like cold showers would lie about anything. It was an oddball jest of the sort that would land Reagan in trouble at various times as governor and president.

For the most part, however, Reagan was a comfortable and self-secure politician. He had a self-deprecating sense of humor, believed in civil discourse, possessed a generous spirit and realized that "compromise" is not a dirty word in politics. In private, he challenged fellow conservatives, saying that liberals accepted partial victories and came back for more. Why couldn't conservatives do the same? This insight helped Reagan secure many compromises from legislatures and a Congress in which he often lacked the votes.

Reagan didn't believe the American political system was "rigged," as Trump asserted in his acceptance speech. When Reagan was campaigning for reelection as governor in 1970, a worker at a plant gate yelled at him: "When are you going to clean up politics?" Reagan answered, "Politics is far more honest than you think."

Nor did Reagan denigrate, as Trump does, the contributions of immigrants who arrive in the United States without authorization. Trump wants to deport them. In 1986 Reagan proposed and signed into law a bill that provided amnesty to 3 million unauthorized immigrants. Reagan had foreshadowed his intentions during a 1984 presidential debate with Walter Mondale when he said: "I believe in the idea of amnesty for those who have put down roots and lived here, even though sometime back they may have entered illegally."

Some Republicans, among them vice- presidential nominee Mike Pence, claim that Donald Trump is the rightful political heir of Ronald Reagan. The record belies them.

Lou Cannon covered the 1980 campaign and the Reagan presidency for The Washington Post. He is the author of "President Reagan: The Role of a Lifetime."