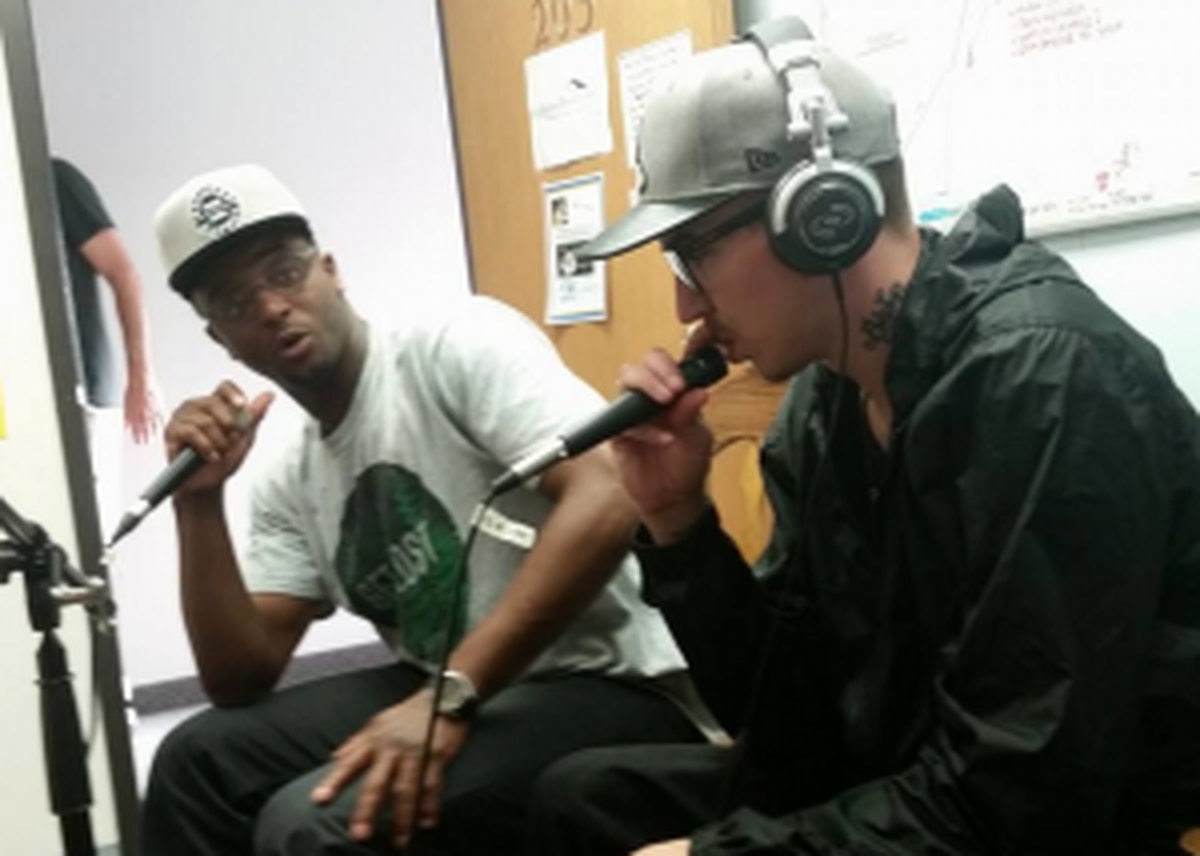 On Aug. 13, rappers Starbuks, left, and Bishop Slice, describe their banishment from the Tanana Valley State Fair during an interview on KWRK-LP, a radio station in Fairbanks. (Flyn Ludington photo)

On Aug. 13, rappers Starbuks, left, and Bishop Slice, describe their banishment from the Tanana Valley State Fair during an interview on KWRK-LP, a radio station in Fairbanks. (Flyn Ludington photo)

FAIRBANKS — If the Tanana Valley State Fair hopes to attract Alaska artists next year it will need to resolve the pointless controversy it created by halting the performance of two rappers, kicking them off the stage and out of the fairgrounds on Thursday, Aug. 11.

This has created a community backlash against the fair, spread by social media in the form of an 11-minute video that has already been viewed 75,000 times, which is close to what the fair draws in a good week.

The fair took a small step in the right direction Tuesday night when its volunteer board of directors said it "recognizes and sincerely apologizes" for the incident and to "those who may have been offended."

"The board understands the issues involved and the sensitivities expressed by all parties. Corrective steps are being taken to develop, revise and implement policies and procedures necessary to avoid any similar future situation," the board said in a statement emailed to the Fairbanks Daily News-Miner.

The conciliatory statement helps, but by not directly addressing the ousted artists and apologizing instead to "those who may have been offended," this won't end the controversy.

The two rappers, one African-American and one Alaska Native, were not swearing, insulting listeners or inciting violence. By all accounts, "Bishop Slice," aka Julian Lillie, and "Starbuks," aka Michael Cofey, did nothing to warrant the insulting and embarrassing treatment.

The live Facebook video by Cofey, which consisted of him asking questions about why they were being removed and escorted off the fairgrounds by security, has done serious damage to the Tanana Valley State Fair.

While Cofey did use the word "crackers" at one point and dropped an F-bomb, otherwise he handled this situation in a responsible manner. I can't say the same for TVSF General Manager Joyce Whitehorn.

The fair only pays $35 to individual performers, so this is really not about money.

Following the banishment, many of the best entertainers who signed up for the final weekend of the fair canceled their appearances, with some performing at other Fairbanks venues, skipping the fair. There have been calls for a boycott and a campaign to increase the voting membership of the fair association in hopes of electing new members to the board of directors.

The Red Hackle Pipe Band, one of the oldest and most respected music groups in Fairbanks, was one of many groups that joined the protest by canceling its appearance. Others included prominent rock musicians, music teachers and other artists.

The cancellations took place because Whitehorn decided midperformance that the rappers, among the 85 or so groups booked for the fair, should be silenced.

On the video, she says an underling of hers should not have allowed them to appear in the first place.

Whitehorn responded, "Isaac shouldn't have asked you to perform because I had told him previously."

She was referring to Isaac Paris, the entertainment manager of the fair, who booked the rappers and the dozens of other entertainers.

The fair does not approve or review lyrics in advance — that is impossible for a small organization. But the rappers were clearly listed in advance on the fair schedule and this was the fourth year Lillie was asked back, performing many of the songs as in the past. He said he edited out the curse words and removed other phrases to suit the audience. "It was clean," he said.

Paris referred me to the mission statement of the fair, which says the organization "educates and entertains all participants by providing opportunities to share a rich variety of individual and community endeavors. The fair encourages and welcomes involvement by all."

I agree with him when he says, "I feel this mission statement was forgotten in the heat of the moment."

When they have time to think about it, I think the board of directors of the nonprofit association and Whitehorn will realize Paris is right.

It's true not everyone is a big fan of rap music, whether it includes swearing or not.

And not everyone is a big fan of Elvis impersonators, tasteless T-shirts, magicians and greasy food, though that does not prevent them from enjoying the fair.

The lyrics of the songs performed at the same fair by the group headed by the original Steppenwolf keyboardist included references to drugs and violence and bad behavior that some would see as objectionable, and others as one element in a diverse culture.

Insisting everything be tailored to please one point of view is a way to guarantee a dwindling and increasingly narrow audience for a bland product.

Those who didn't like the rappers were free to move on to hundreds of other options at that moment, to check out the quilts, the chickens or the cucumbers.

Whitehorn did not improve the situation when several fans of Bishop Slice started chanting his name in the bleachers outside the small stage and she snapped at them, "Knock it off. All of you are going to get eighty-sixed out of here," another unfortunate incident captured on video. That one has had more than 12,000 views.

Cofey said he never likes to pull out his camera phone and record what happens. "That's really not my thing," he told interviewer Flyn Ludington in a discussion broadcast Saturday on KWRK-LP, a low-power Fairbanks FM radio station. "But there's so much craziness going on," he said, he decided to record it.

He told KWRK that while Whitehorn made a mistake, there is no excuse for people directing ugly language her way. "She's a human being, so I would ask everybody to respect her, refrain from calling her the B-word, you know what I mean."

We live in an era when if you say dumb things, they are likely to come back at you. I've said lots of stupid things that were bad enough just once, so I empathize with Whitehorn. The power of endless repetition makes it harder to recover from your mistakes.

The power of social media has put the fair in a bad light, deservedly so.

Columnist Dermot Cole lives in Fairbanks. The views expressed here are the writer's and are not necessarily endorsed by Alaska Dispatch News, which welcomes a broad range of viewpoints. To submit a piece for consideration, email commentary(at)alaskadispatch.com. Send submissions shorter than 200 words to letters@alaskadispatch.com or click here to submit via any web browser.