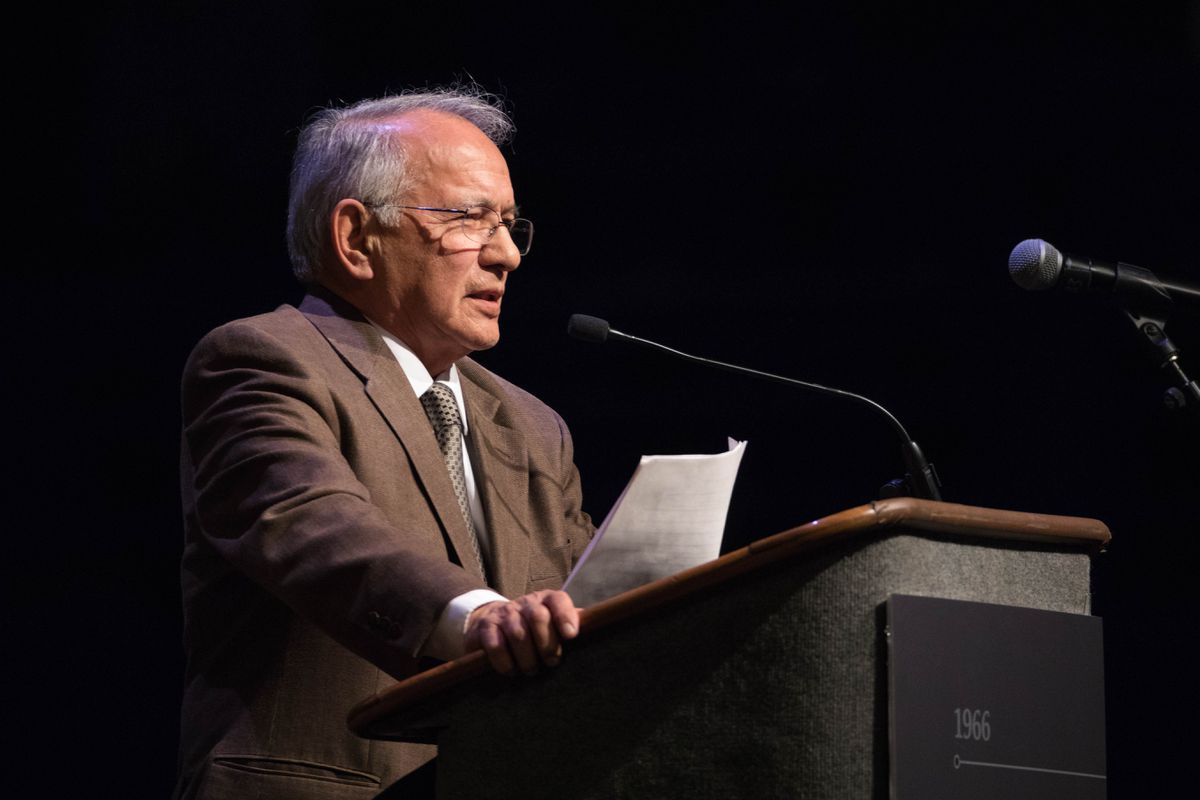 Emil Notti delivers the keynote address on the first day of the Alaska Federation of Natives convention at the Carlson Center in Fairbanks on Thursday. (Loren Holmes / Alaska Dispatch News)

Emil Notti delivers the keynote address on the first day of the Alaska Federation of Natives convention at the Carlson Center in Fairbanks on Thursday. (Loren Holmes / Alaska Dispatch News)

FAIRBANKS — It's not hard to list what the founders of the Alaska Federation of Natives had going for them a half-century ago — energy, enthusiasm and an unstoppable commitment to be involved in any discussion about the future of Alaska lands.

Almost everything else they had to do without, which is why the early years of the land claims effort for AFN featured sacrifice and struggle.

Emil Notti, 83, the president of AFN for its first five years, gave a stirring history lesson Thursday in a keynote address to the convention, 50 years to the week that Alaska Natives launched AFN.

Notti, born in Koyukuk, attended Mt. Edgecumbe High School in Sitka and is a Navy veteran who earned an engineering degree from Northrop University.

He was 33 when AFN, with all of $9 in the bank, was launched. "Money was hard to come by," he said. Support from the Native village of Tyonek was critical,  as was a $250,000 loan from the Yakima Tribe in Washington.

Notti said his family had to sacrifice. He earned $1,200 a month for almost five years and fell three months behind on his house payment and his car payment. At one point he needed 24-hour protection from the Alaska State Troopers because of threats to him and his family.

He mentioned about 20 early leaders and government officials who helped accomplish the major goal of acquiring a large land entitlement for Alaska Natives, but said that didn't begin to cover the subject.

"We took the heat, the criticism, the negative editorials, the nasty phone calls in the middle of the night," said Notti.

The Alaska State Chamber of Commerce mocked the group at an annual meeting and it faced opposition from miners, sportsmen, newspapers, the state government and other powerful organizations in Alaska. It also had to combat a Congress accustomed to taking Native land and then paying pennies on the acre.

"We worked peacefully within the system," he said, adding that the real question was not whether Alaska Natives had land rights, but whether it was possible for Congress to work with a minority population that had no money or political power.

"By sheer determination and working together, we made it work," he said.

The main goal of the movement was accomplished, that of securing a large land claim for the future, he said. In 1971, the Alaska Native Claims Settlement Act provided for a cash payment of nearly $1 billion and 44 million acres of land, establishing the Alaska Native Regional Corporations that have become economic powerhouses in the state.

"The story of land claims is a story of sacrifice on the part of so many people who participated in the early days, people who took time off from work, paid their own way," he said.

Cecil Barnes took out a mortgage on his house in Cordova so he could afford to volunteer. Willie Hensley, a young college student, took out a $10,000 life insurance policy with AFN as the beneficiary. One day, Emil's brother, Fred, flew his Cessna 180 at his own expense from Anchorage to Unalakleet, Kotzebue, Fairbanks and back to Anchorage to round up people for an AFN meeting.

[After 18 years in prison, the Fairbanks Four settle into life as free men]

Notti said that those who worked on the land claims movement did it for their grandchildren. "That includes many of you young people that are here today," Notti said, addressing a crowd of more than 2,000 of all ages.

"The future that they worked for is here," he said.

But the work isn't finished, he said, on job training, employment, rural housing and land management. People born after 1971, the year the law took effect, need to be brought into the Native corporations as shareholders, he said.

"It was my privilege to lead AFN the first five years and I was supported by so many dedicated and talented people," he said.

He closed by saying that he drew the logo for AFN that is still in use and he also drew the boundary lines for the regions. "To my amazement, they're still in effect after 50 years."