How to build a 100-ton model train 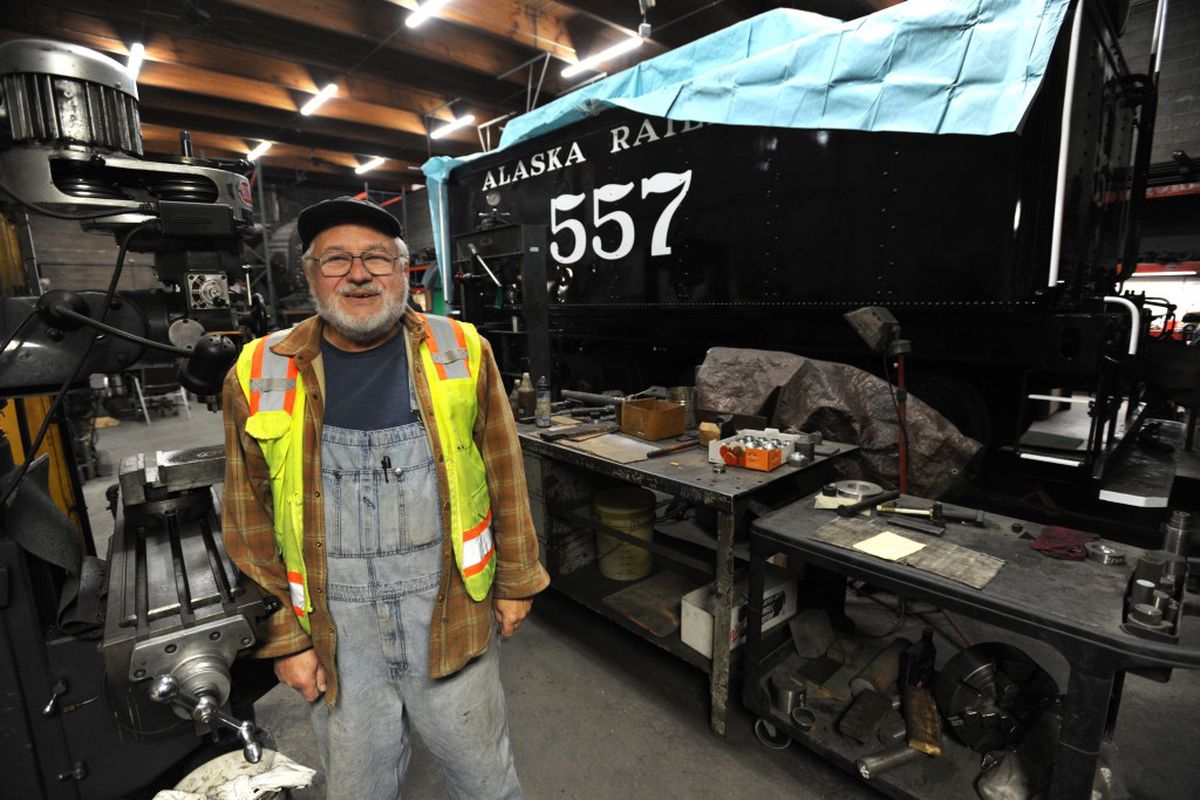 Patrick Durand received his first American Flyer train set with his three brothers in about 1950 and has never stopped upgrading. Now he's working with a band of 26 brothers to rebuild a full-size steam locomotive in Wasilla.

Durand was born at Old Providence Hospital at Ninth Avenue and L Street in 1943, the same year Engine 557 was built by Baldwin for the Army. He still has the bill for his birth, $18 for the delivery plus $3 a day for his mother's hospital stay. The U.S. government paid $56,000 for the engine.

Rebuilding a steam engine is like no other job. If you're old enough to have worked on cars before they had computers, you may understand, or if you play vinyl records rather than MP3s. Steampunk comes to life in the engine, intricate machinery manually operated by rods, gears and heat, dizzying in complexity yet completely tangible and real.

The firebox had to be rebuilt from scratch. Too much of the thick steel had corroded away to withstand operating pressure. The rebuild required shaping and welding 7/16-inch steel plate, verifying its thickness by ultrasound in 3,000 places, and positioning it to fit 1,043 bolts — which had to be fabricated — and 180 boiler tubes and flue pipes.

Patience and precision are part of the pleasure of the work, as I could tell watching the white-haired gentlemen toiling in the shop Thursday, all wearing overalls and matching Engine 557 caps. Without a crane, they lift and position tons of steel with chain hoists.

"We're all brothers on the task, and we don't move anything until we know where it's going," Durand said. "You root out the potentially hazardous person."

Durand began his working life in the Mat-Su valley area at age 13, climbing a 40-foot drill rig with a grease gun in one hand as his grandfather drilled water wells. His grandfather also worked in the Ship Creek freight house at the Alaska Railroad.

"I learned how to work with older people as a kid, and I worked all my life in those types of situations," he said.

The Army built 2,120 S-160 class locomotives for use in the war in Europe and Africa, with 12 going to Alaska to help fortify against the Japanese. Another copy survives here, Engine 556, which stands on the Delaney Park Strip at Ninth Avenue and E Street.

The Alaska Railroad kept Engine 557 operating long after the age of steam for ceremonial purposes and to run through deep flood waters, which diesel-electric locomotives could not do. The railroad finally sold it in 1964 to a scrap dealer from Moses Lake, Washington, who displayed it as a museum relic.

In 2011, Jim and Vic Jansen of Lynden Transport bought the engine and gave it to the Alaska Railroad, which returned it to Alaska. The Rasmuson Foundation offered a $350,000 matching grant to restore the locomotive. When Durand got involved, he lured Anchorage's model railroading clubs to help match the grant.

But the original cost estimate was way off. The job is now estimated to take six years and cost $1.2 million. The group is four years in and has spent about $800,000.

And that doesn't count the labor, which is almost all donated, or huge in-kind donations — airline tickets, legal work, paint and $46,500 worth of asbestos mitigation, for example. Old machine tools were donated, some not working, but the guys got everything fixed up so they can make parts out of metal.

The group still welcomes help of all kinds — get in touch at alaskarails.org. To volunteer, you just go to the shop and Durand sizes you up.

The men work on the locomotive four days a week starting at 8 a.m. All have some history working with their hands. Jerry Peters spent 31 years with the Alaska Railroad as a master mechanic. There's also a heavy equipment mechanic, a welder, a house builder and a former NASA guy.

A mechanical engineer in South Carolina is the only paid person on the project. He has worked on other steam engines around the country and produced the extensive paperwork to certify the boiler is safe.

Plans for the project originally came photocopied from an old model railroad hobbyist magazine, with just a few elevations and cut-aways. Although every locomotive was shipped with a complete set of bound blueprints weighing 62 pounds, not a single copy remained among the owners of the engines still surviving around the world.

But volunteer Dick Morris tracked down plans in a museum in Lima, Ohio, and worked there to index drawings and interview notes of meetings among the original builders as they discussed design choices. The digitized documentation he collected has sold seven times to other engine owners for $1,000 a copy.

Ultimately, the volunteers want to see the locomotive pull passenger cars again. But many steps remain.

They will need to rehabilitate old cars, as the railroad doesn't have extras for them to use, and they may need to fix up track. An original plan to run the engine from Anchorage to Portage probably won't work with new federal regulations that require computerized positive train control. Engine 557 might be restricted to the short Palmer branch line, which has only gravel trains.

That's far in the future. The guys aren't rushing. After four years of work, the locomotive still doesn't look much like a locomotive.

A clue to their slow, careful work can be seen in the tender (the fuel and water carrier behind the engine), which they completely disassembled. Now nearly finished, it shines with a spectacular paint job, six coats, much better than the original.

Durand admits the crew is making the engine better than new. It was built quickly, in the middle of a war, with cast parts left rough, unpainted and forced together. The restorers are improving all that, working in tight spaces where men probably never worked before, as carefully as if putting together models in their basements.

"Our goal is to restore the machine so it's good for another 75 years," Durand said.