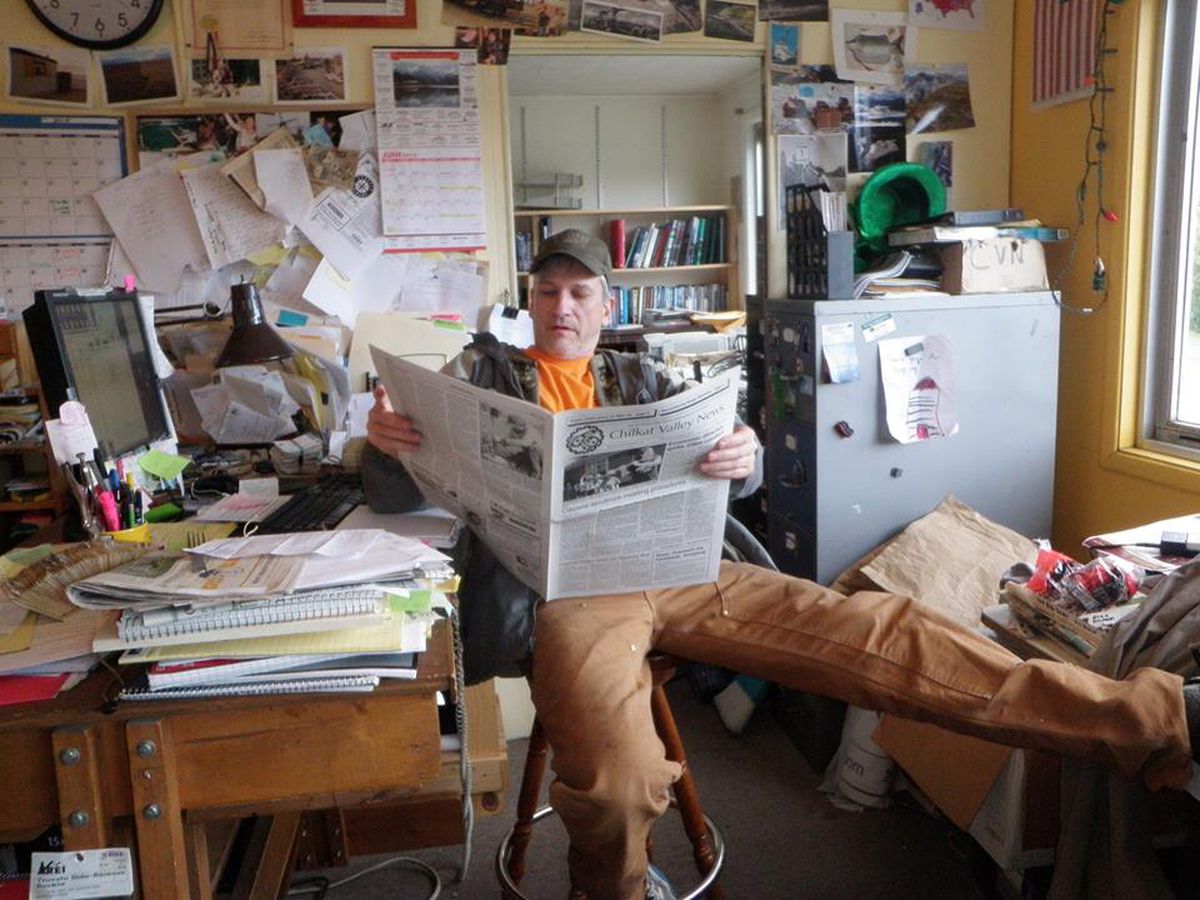 Tom Morphet at his desk at the Chilkat Valley News in Haines, Alaska. (Courtesy Tom Morphet.)

Tom Morphet at his desk at the Chilkat Valley News in Haines, Alaska. (Courtesy Tom Morphet.)

Haines Borough Assemblyman Tom Morphet didn't like a headline last week about his demand for a special election, but he couldn't complain because he owns the newspaper.

Morphet ran the Chilkat Valley News for 25 years before he bought it five years ago. But this year he got tired of watching from the sidelines of local politics. He tried to sell the paper to avoid a conflict of interest — for a fourth of what he paid for it — but the sale fell through.

The hot issue in Haines right now is whether to go ahead with a harbor expansion project. Morphet thought the Assembly was rushing to hire a contractor. He wants voters to weigh in before the borough signs anything.

At 55, he needs a new career. His wife, Jane Pascoe, has her eye on a house in town that, unlike his cabin in the woods 8 miles out, has power and water.

"I said, 'Honey, we could live for free in the cabin.' But she wants to flush a toilet," Morphet said. "When I met her she was a girl living out of a backpack and she didn't care."

Morphet accepted poverty for decades to do no-nonsense journalism in a tiny town that could barely support it and didn't always appreciate it. The News has won 20 Alaska Press Club awards in the last three years but sells only 1,500 copies at the height of the visitor season.

Heather Lende, also elected to the Assembly in October, began her writing career at the paper. She still gets $75 apiece for obituaries, long after much larger papers, including this one, switched from staff-written obits to making money by letting families write their own. Morphet treats every obituary as a hard news story.

Lende has published three books based on her Haines obituaries, developing a national reputation as an essayist. But she said Morphet still makes her verify every fact and flatten her prose into straight, short newspaper sentences.

She said he's stubborn, raises his voice at times and makes enemies.

"Most people thought when Tom ran there was no way he would get elected," Lende said. "Except for Tom. And he campaigned unbelievably … Even when people would slam the door, he'd say, 'wait-wait-wait.' "

In the end, Lende said, even some of those who didn't like him realized a tough, ethical, inquisitive guy could represent them well.

Morphet grew up near Philadelphia. He spent summers home from Marquette University working in the engine rooms of oil tankers. Bumming around after graduation, he saw an ad in a Seattle paper that brought him to Alaska.

"They suckered me in," he recalled. "The ad said, 'Seeking adventure?' Yes, that's me. 'Seafood processors needed.' "

The hilariously awful, minimum wage job on a floating slime line — with rotting fish and no water for bathing for up to two weeks at a stretch — landed him in Anchorage in 1984. He worked at the Anchorage Times until, adventure over, he drove toward home, his Datsun's hood secured with a camera strap.

A two-day wait for the ferry south in Haines caught him. The sun was out.

"I couldn't understand why there weren't more people here. It was the prettiest place I had ever seen," Morphet said.

Shortly, he had a temporary job for the local paper. Which slowly turned permanent.

Morphet took breaks. He bought his cabin and 5 acres with money he earned at a construction site in Las Vegas in 1991, where he watched tortoises to keep them from being run over. He met his wife, Pascoe, an Australian, on the dance floor at the Alaskan Bar in Juneau during another work break from journalism in 2001.

The breaks helped him to survive in Haines. Good journalists make people mad, which in a small town means alienating neighbors and advertisers.

Morphet particularly remembers the anger when the News reported in the 1990s that a local teen had been drinking before a fatal auto accident. A group of local business people started another paper that would be more positive and less liberal. It didn't last, but the lack of advertising from the town's grocery stores is still a major financial issue.

"It's a real tightrope walk to uphold the standards of journalism in a town this small, because there is not a buffer between the reporters and the people they write about," Morphet said. "What you write becomes very personal very quickly."

The harbor issue is his latest battle. Morphet called for a vote in an editorial last year. When it didn't happen, he decided to run. He offered to sell the paper to his reporter for a deep discount to prevent a conflict of interest, but she left instead.

He is still trying to sell, but with heavy conditions.

"I only want it to go to a local person who is committed to the community," he said. "When you've done this for 25 or 30 years, what you have in it is something different than cash. You have an investment in the community."

Morphet said the $60,000 he paid for the News — on installments — bought him a $50,000-a-year, seven-day-a-week job. The paper doesn't bring in enough money for an owner to take out a profit without also working there.

He'd like to go back to his original plan to be a historian.

Morphet expected to major in history at Marquette, but when he arrived as a freshman his counselor told him he would probably end up selling pants at Sears. Morphet thought of his Aunt Stella, who had sold him a new pair of double-knit slacks every year of his childhood.

"He didn't know it, but he hit me right in my Achilles. I thought, 'Oh my god, I'm going to end up like Aunt Stella,' " Morphet said. "He said, 'I encourage you to pursue journalism, because at least you'll be able to make a living.' It was probably the worst advice I ever took."