Amy Demboski should think once 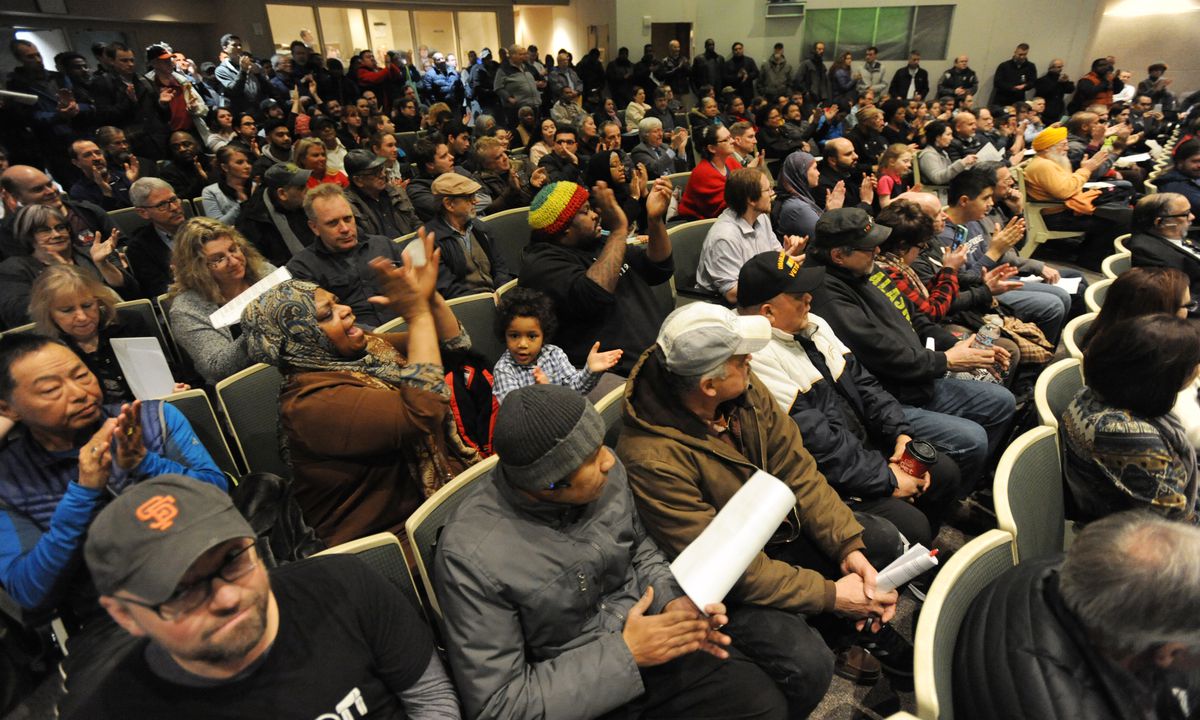 People show their support as Gregory and Maleika Jones speak to the Anchorage Assembly on Tuesday about how comments made by Assemblywoman Amy Demboski have changed their life. (Bill Roth / Alaska Dispatch News)

People show their support as Gregory and Maleika Jones speak to the Anchorage Assembly on Tuesday about how comments made by Assemblywoman Amy Demboski have changed their life. (Bill Roth / Alaska Dispatch News)

"Be careful with your words."

That was something I heard Pop Moore often say while I was growing up. I guess that's a saying we all hear often enough, but I wonder how many people really think about the weight of their words. With the flood of information and the ability to have a bazillion words at your fingertips at any second — thanks to our phones — maybe we feel deluged in our own language.

Much has been written about Anchorage Assembly member Amy Demboski and her — at best — careless use of language this week in regard to a Muslim Alaskan man and his family. On a radio program and her Facebook page, Demboski implied that Greg Jones, who was a Mat-Su valley House candidate in the past election, is a weapon-hoarding terrorist who is living among us. The horrors.

I will try to be careful with my own words here, but somewhere there is a box of rocks feeling really smart while looking at the mental gymnastics of Amy Demboski. She posted fake news and then said she wasn't sorry when Mr. Jones and his family were threatened by wannabe patriots who can't tell what fake news looks like.

This shouldn't really surprise anyone who has followed Demboski's trajectory. When she ran for mayor, she insinuated that now-Mayor Ethan Berkowitz was pro-incest. When asked about it, she said you'd have to ask him because she would have no way knowing if he wanted to marry his own son or not. Yeah. That seemed to be a big head-scratcher for no one on the planet but her.

Demboski has doubled down and won't apologize for spreading fake news and endangering Alaskans who don't worship in the same place she does. Trust me, the hate merchants who run talk radio are thrilled by the controversy. There is no bad scandal, no matter who the victims are, and as long as you spell her name right maybe someone will trip upon the station and listen to her. This type of behavior is egged on. Think bottom-feeders, but not the valuable ones like halibut and crab. For every complaint call into the radio station, there is a high five. "At least they are finally listening!" Companies who sponsor radio shows don't feel the same way.

In what I hope is a hat tip to irony, Demboski has posted on her Facebook page a story about flag burning and how terrible it is: "These people are just demonstrating with every protest, riot, and freak out why Donald Trump won. Here's a hint: most of the country think you're ridiculous. Grow up and get a job."

Meanwhile, Donald Trump has been tweeting that people who burn flags should lose their citizenship and maybe go to jail for a year. He wants to change the rules to make it illegal. Also, "Saturday Night Live" and Alec Baldwin aren't funny and should stop being mean-spirited to him.

I don't know if it is comforting or terrifying for you, but it should be noted that these two elected politicians suffer the same deficiency of basic First Amendment understanding. Demboski defends her own spreading of hate speech and thinks people don't have a right to burn the flag. Trump doesn't want any criticism but wants to shut down rallies in Washington and jail people expressing rights already decided by the Supreme Court and enshrined in our Bill of Rights.

This brings me back to Mr. and Mrs. Jones, targeted by someone who represents the Think Tank on Empty. It was heartening to see so many Alaskans show up to support them. It is amazing to have an Assembly chair like Elvi Gray-Jackson who will show compassion and stand up for what is right. It's time for the religious bigotry shown against Muslims to be squelched by Americans of all, and of no, faiths.

I've spent my whole life around Old Believer Russians in the Kachemak Bay area. Not one time have I ever heard of them being denied service or told to remove their headscarves. Can you imagine the nuns at Providence having to remove their habits because someone was afraid of Catholics? Oh, and if you don't think this is about religious persecution, please look at how many women wanting to wear their hijabs have been denied employment or entry in this country, while white men wearing white hoods are allowed to walk in parades celebrating their bigotry.

Alaskans are better than Amy Demboski. I'm hoping we can keep up with the Joneses, even if she won't.