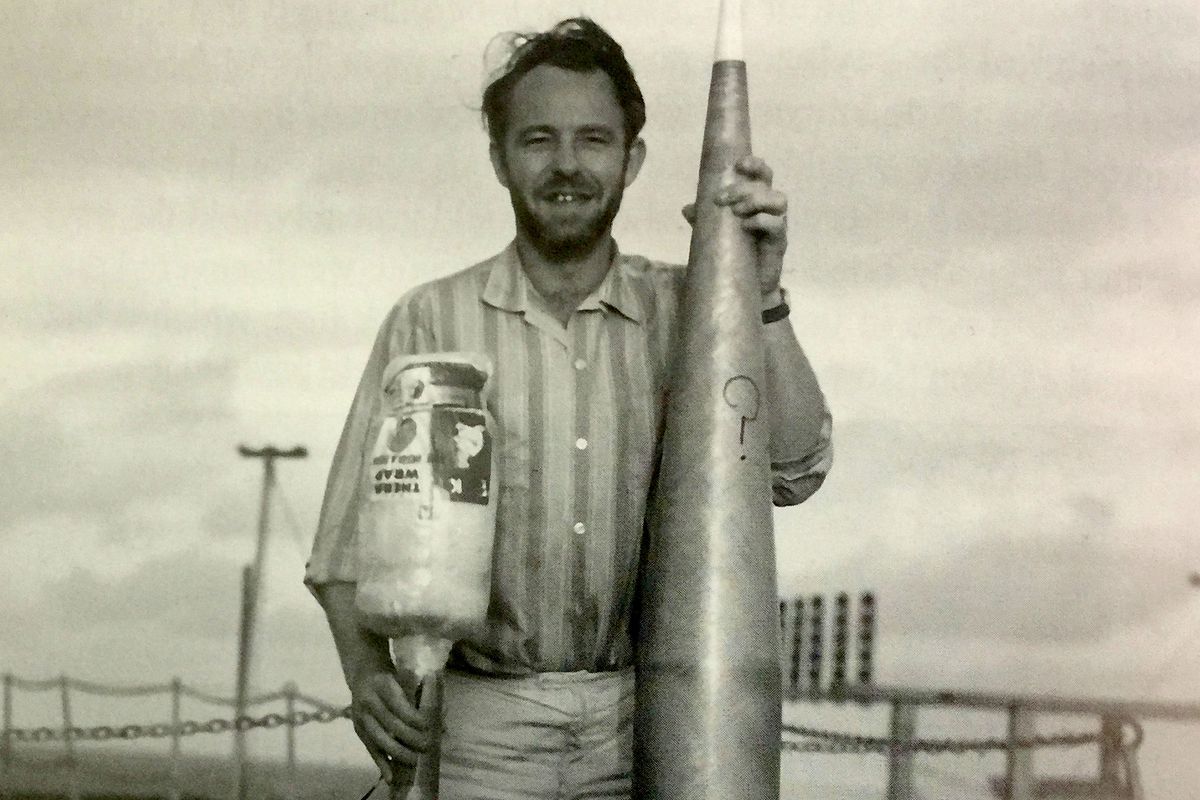 Neil Davis early in his rocket career on a ship off the coast of Ecuador during a NASA test in March 1965. (Courtesy of Davis Family)

Neil Davis early in his rocket career on a ship off the coast of Ecuador during a NASA test in March 1965. (Courtesy of Davis Family)

FAIRBANKS — Inspired in part by a Bret Harte story, "The Outcasts of Poker Flat," geophysicist Neil Davis bestowed the temporary title "Poker Flat" on the rocket range he sought to build north of Fairbanks, just until a better name came along.

More than 350 launches later, it hasn't happened yet.

For Davis, who died at his home here Saturday at 84, the creation of the Poker Flat Research Range — built from scratch — was one of the more noteworthy accomplishments in a life marked by a sense of curiosity that could never be extinguished. He pursued important research on the aurora, studied the physics of frozen ground, worked in seismology and helped others succeed.

After retiring from UAF in 1981, he became an independent writer and researcher, finishing a dozen books that reflected his wide-ranging interests. He wrote an early history of the university, as well as a book of short stories about gold mining, a permafrost textbook and an investigation of what ails the health care system in the U.S., a work that grew out of witnessing his daughter's difficult battle with cancer.

In 1976, he had started a weekly newspaper column in which he explained complicated and sometimes simple scientific subjects to the public in clear language. That he managed to do so without the crutch of jargon set his work apart.

The son of two adventurous parents, he had dropped out of high school at 15 and was a teenage airplane mechanic at Wien Airlines, overhauling the engines on DC-3s, an experience that rekindled his academic desires.

Coming from a family that was often on the move, he attended 14 schools before seeing the last of high school. His parents homesteaded near what is now North Pole and he attended college for 11 years in Fairbanks, Iowa and California, earning a doctorate at UAF in 1961.

Davis met Rosemarie in one of those 14 schools in Iowa and they married in 1951 before he returned to Alaska. They began building a log house west of the university in 1956, raised three children and discovered that Alaska was a place that encouraged the development of multiple talents.

His long career at the Geophysical Institute began with a temporary job painting a loading dock. One assignment led to another.

Within a decade he was learning rocket science, becoming a scientific leader at UAF after a stint at the Goddard Space Center.

"Many people have told me that he was the best salesman that the Geophysical Institute ever had," said fellow scientist Neal Brown, a longtime friend of Davis and the first full-time director of Poker Flat. "He had a remarkable ability to solve problems and make things work for everyone. It was never an ego thing for him."

Once, when Davis came back from a sabbatical he had no place to stay because the family home was rented out. It was summer and he opted to pitch a tent on the roof of the Geophysical Institute for temporary quarters.

Dan Osborne, who worked under Davis and considered him a great boss, said no one ever found out how the campus police came to inspect the roof that night. Davis had some explaining to do.

"But he was still the associate director at that time and an employee, so they went easy on him. We all laughed at that and Neil laughed the hardest," said Osborne.

His natural aw-shucks manner and solid storytelling skills helped Davis in his quest to explain matters of science, public policy and history to the public. He did it early on in the newspaper column and later in his books, even trying his hand at fiction.

In the 1960s, it was no easy trick for him to get the clearance for a rocket range for high-altitude research at what Davis always said was "the best place in the world for auroral work."

The head rocket man at NASA wasn't eager to champion a rocket range 30 miles north of Fairbanks, as NASA preferred a site on the west shore of Hudson Bay in Canada. But Davis managed to get a small NASA contract from another agency official that led to a report touting the advantages of Fairbanks.

When he talked to Department of the Interior officials about securing landing rights for rocket debris in northern Alaska, they got the impression that the space agency was onboard. This helped the university win permission to fly rockets over all the land from the Yukon and Tanana rivers to the coast.

"No need for me to proclaim NASA's interest," he wrote in one of his books, "Rockets Over Alaska: The Genesis of Poker Flat." "All I had to do was rightfully state that I was working under NASA contract."

It was the crash of a B-52 carrying hydrogen bombs at Thule, Greenland, in 1968 that indirectly led to the first launch at Poker Flat a year later, as the military sought a new high-latitude launch site for one of its programs.

The first rocket, a two-stage Nike-Hydac weighing almost a ton, blasted off on March 5, 1969, the first of seven rockets launched that month. The countdown was carried live on radio stations across the state.

The rocket released a canister of barium metal and copper oxide that glowed bright yellow and green above Alaska, the first of many experiments in the years ahead that aided scientists studying the polar ionosphere.

Davis once wrote that although he had earned a doctorate in geophysics, he had forgotten most of the facts he had learned and some of the math.

The real benefits to academic training and research could be found in the discipline to persist, he wrote in a memoir about his college days, "Head, Tail & Guts Included: The Story of a College Education in Alaska & Warmer Climes."

"I had learned how to read with comprehension and how to go about learning new things. Perhaps that was the most important of all."

He applied that lesson for all of his days.